Where the Truth Lies: The Art of Qiu Ying

Los Angeles — The Los Angeles County Museum of Art (LACMA) presents Where the Truth Lies: The Art of Qiu Ying, the first exhibition on the great Ming dynasty painter ever organized outside of Asia. Few artists in Chinese history have proven as enigmatic as Qiu Ying (c. 1494–c.1552), whose life and art reveal a series of paradoxes. Though one of the most famous artists of the Ming period, almost nothing is known about his life. Qiu Ying is said to have been illiterate, yet surviving evidence demonstrates elegant writing; and though he is said to have had few followers, he remains one of the most copied painters in Chinese history.

Featuring a total of 65 works, 45 of which are by Qiu Ying, Where the Truth Lies brings forth the largest gathering of paintings by the artist ever assembled in the U.S. In addition to masterworks by Qiu Ying, the exhibition includes paintings by 17 other artists including his predecessors and teachers, his daughter Qiu Zhu, and followers from the early 16th through the mid-20th century. Where the Truth Lies is curated by Stephen Little, the Florence and Harry Sloan Curator of Chinese Art and head of Chinese, Korean, and South & Southeast Asian art at LACMA.

“Where the Truth Lies presents a bold new interpretation of the chronological development and stylistic and thematic range of Qiu Ying,” said LACMA CEO and Wallis Annenberg Director Michael Govan. “Such an exhibition on the artist has never before been organized and is part of LACMA’s initiative to present groundbreaking exhibitions that will significantly enhance our knowledge of Chinese art. Furthermore, the exhibition plays a key role in the museum’s continued development of new audiences for Asian art and culture in Los Angeles.”

“Qiu Ying was, and remains, one of the most copied and forged painters in Chinese history,” said Little. “Genuine works are routinely confused with forgeries and vice versa, leading to widespread confusion regarding his work and its significance in the history of Chinese painting. This is a rare exhibition in that it is ultimately about the art of perception, providing visitors with the opportunity to test their own judgment by juxtaposing genuine works with beautiful and sophisticated copies. This is a subject rarely explored in art museums.”

About the Exhibition
Where the Truth Lies: The Art of Qiu Ying proves, for the first time, that contrary to prevailing belief, Qiu Ying was highly literate. In addition, despite his obscure origins, Qiu Ying painted primarily for an affluent, elite, politically powerful, and sophisticated audience, and his works were inscribed with poems and commentaries by over 20 of the artist’s most famous literati contemporaries, indicating their respect for his skill and the subtlety of his interpretation of literary subjects. Where the Truth Lies grapples with such issues as artists who cross social boundaries, literacy, and the importance of connoisseurship in determining quality and authenticity. The exhibition also presents some of the most beautiful surviving paintings from the Ming period, including many that have never before been seen in the U.S., and others that are published here for the first time. 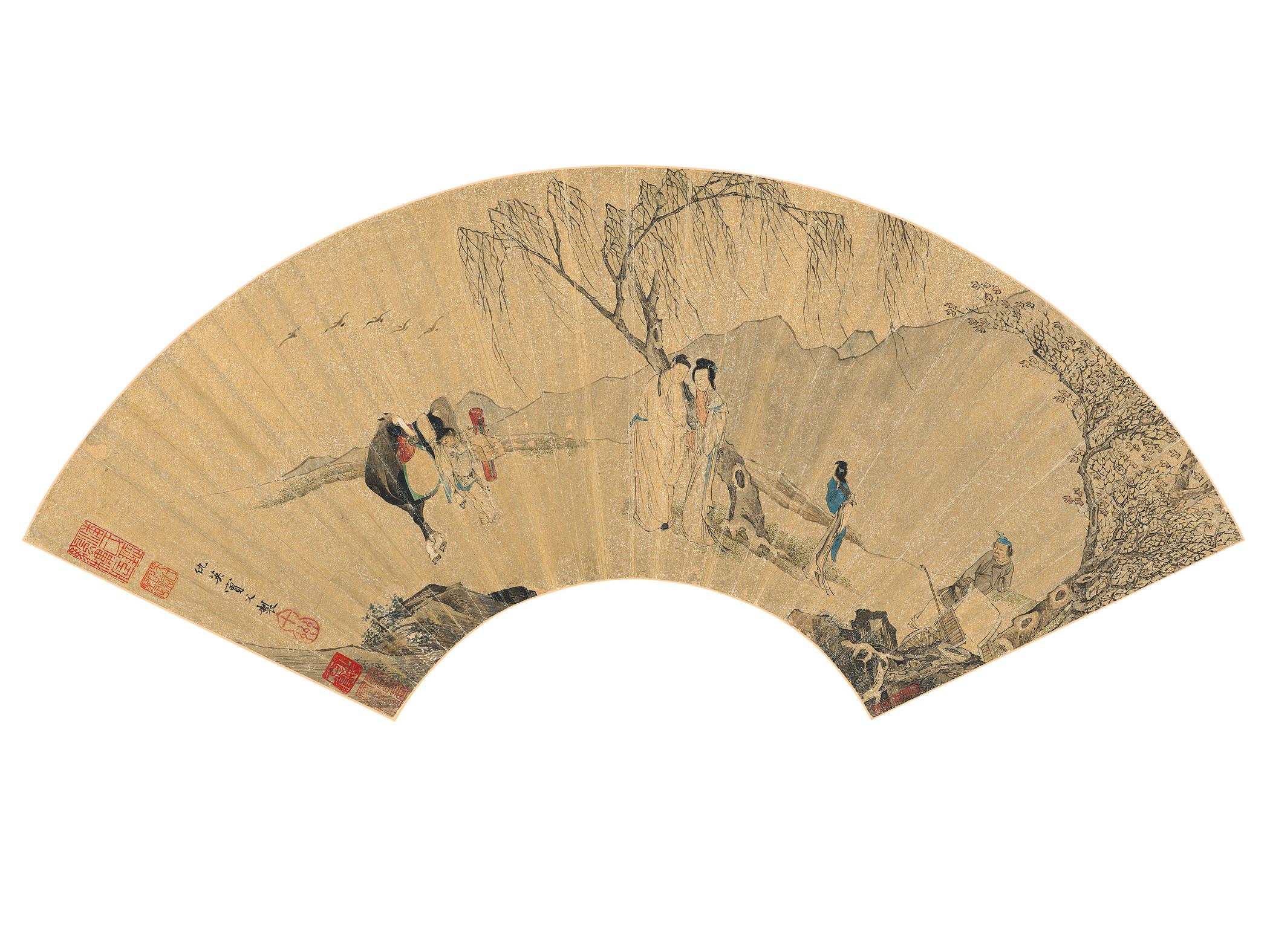 Exhibition Organization
Where the Truth Lies presents a new chronological structure for Qiu Ying’s work and career. The exhibition presents key works by Qiu Ying’s predecessors, teachers, students, and followers, placing the artist’s work in a larger social and historical context. It includes a total of 65 paintings in traditional Chinese formats, including hanging scrolls, handscrolls, album leaves, and fans, and is organized in thematic sections that explore Qiu Ying’s precedents; cover the artist’s early, mid-career, and late works; and finally, acknowledge the artist’s legacy.

One of the many challenges of understanding the work of Qiu Ying lies in the recognition of the unusually wide range of artists and classical styles to which he was exposed over the course of his career. His surviving paintings reveal influences from his precedents whose works are on view in this section, including early-Ming court painters and other professional artists active in Beijing and Nanjing; scholar professional painters; Wu School literati painters like Wen Zhengming (1470– 1559) and his many literati followers active in the city of Suzhou; Qiu Ying’s primary teacher, Zhou Chen (1470–1535); and the many old master paintings ranging in date from the Tang (618–906) through the Yuan (1260–1368) dynasties that Qiu Ying studied in private collections in the Jiangnan area. 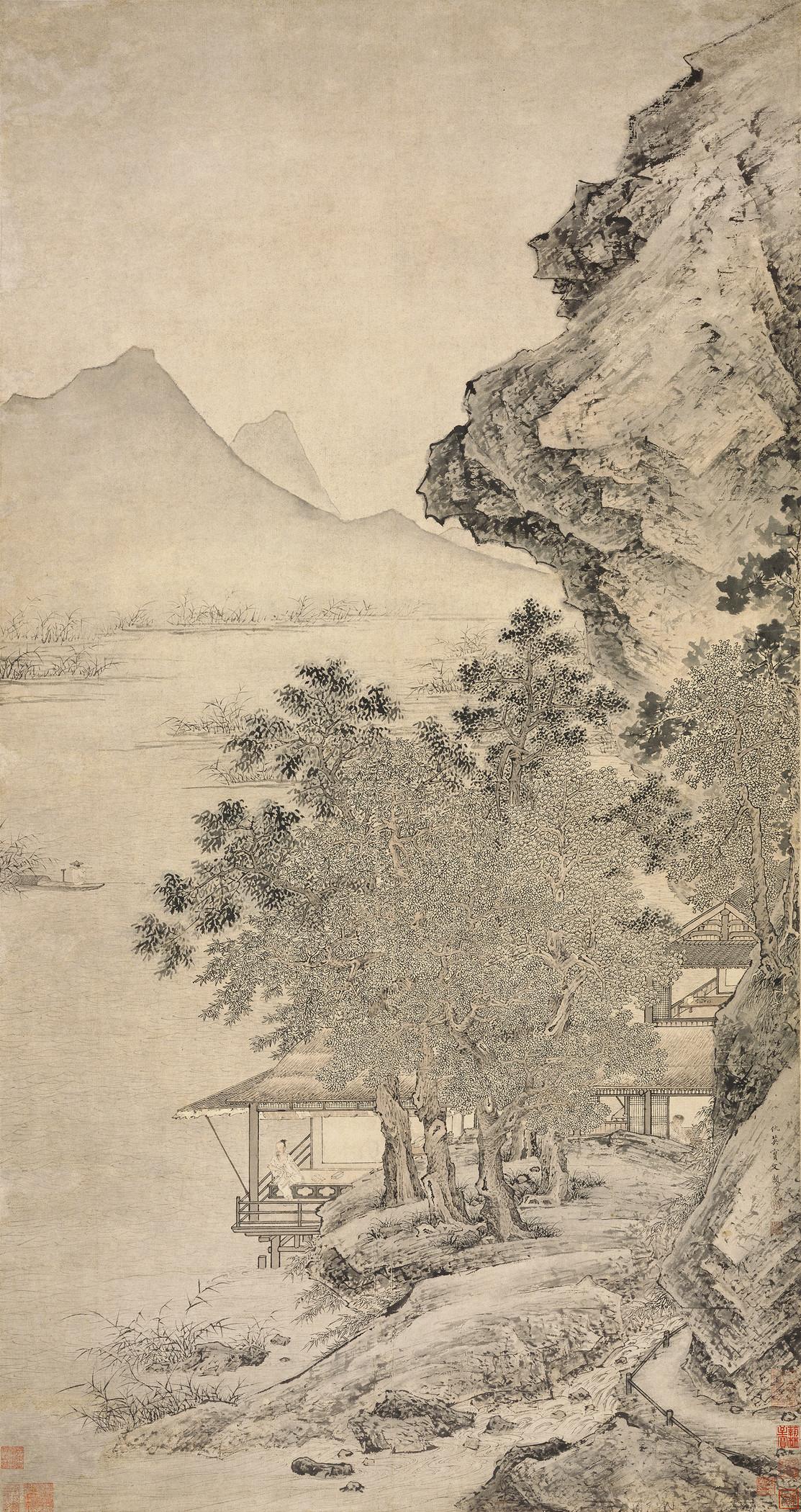 It is likely that Qiu Ying was a child prodigy who, by his teen years, was already active as a painter. Given the challenge of clarifying his overall chronological development, it is not surprising that there have been few attempts to identify the artist’s earliest surviving paintings and reconstruct the arc of his early career. A section on the artist’s early works from c. 1504–25 includes key paintings by Qiu Ying, such as the handscroll Saying Farewell at Xunyang, the artist’s interpretation of Song of the Lute (Pipa xing), a famous narrative poem by the early-9th-century poet Bai Juyi. Also included in this section are the artist’s experiments with a wide diversity of landscape styles, among them, the lyrical modes associated with Song-dynasty court artists. Rare examples of Qiu Ying’s copies of famous earlier compositions include his paintings The Gathering of the Lotus Society (after the 11th-century painter Li Gonglin), Mahaprajapati Nursing the Infant Buddha (after the 14th-century painter Wang Zhenpeng), and Portrait of Ni Zan (copying a famous portrait of the Yuan dynasty painter, calligrapher, musician, and collector Ni Zan).

A group of Qiu Ying paintings contains inscriptions and colophons by the scholar and calligrapher Wang Chong (1494–1533), and thus can be dated to no later than 1533, the time of Wang’s death. Wang inscribed poems on at least six surviving paintings by Qiu Ying, including Pavilion among Wutong Trees and Bamboo. Dating these works prior to 1533 situates them amongst Qiu Ying’s midcareer works. Elements of their signatures and seals enable us to relate them directly to other paintings by him of that period. The evolution of Qiu Ying’s work during the latter phase of his midcareer years can be documented by a group of paintings created close to the year 1540, particularly those painted for two of his most important patrons, Zhou Fenglai and Chen Guan. During this period, many of Qiu Ying’s paintings were inscribed by Wen Zhengming, who had become his mentor, and other literati artists in Wen’s immediate circle. They clearly valued Qiu Ying’s art, as they inscribed his paintings with their calligraphy. The artist’s social and professional proximity to the leading Suzhou literati of his day further demonstrates the porous nature of class structure in the middle-Ming dynasty. Through his gifts as a painter, Qiu Ying was able to transcend the limitations of class boundaries.

Qiu Ying was a rare artist whose skill continued to improve late in life up until the time of his death. A section on the artist’s late works from 1542 to 1552 surveys the paintings he created in his final decade, the period that yielded the largest percentage of his dated and datable works. During these years, Qiu Ying is said to have spent considerable time as a guest in the home of the great collector Xiang Yuanbian in nearby Jiaxing, where he created many of his best-known paintings. According to recent research, by the time of his death in 1590, Xiang owned nearly 50 works by Qiu Ying. Many of the works presented in this section, as in earlier periods of his career, can be grouped together on the basis of their superb and meticulous technique, the calligraphy of Qiu Ying’s signatures, and the consistent use of particular personal seals.

Qiu Ying’s reputation and appeal grew only stronger after his death. The section Qiu Ying’s Legacy focuses on works by his daughter, Qiu Zhu, his close follower and possible son-in-law, You Qiu, and a broad range of artists whose works were either copies of or inspired by Qiu Ying. Among these later artists are Gu Jianlong (1606– c. 1687), Jin Cheng (1878–1926), and Zhang Daqian (1899–1983). Included too are examples of Ming- and Qing-dynasty forgeries of Qiu Ying’s work: the handscrolls Spring Morning in the Gardens of the Han Palace and The Peach Blossom Spring, both of a type known generically as Suzhou fakes (Suzhou pian), which proliferated from the 16th century onward. Many of these copies and forgeries continue to flood the art market, causing endless confusion regarding authenticity. It is nonetheless a tribute to Qiu Ying’s enduring legacy that his works were emulated in China, Korea, and Japan, and that he is still widely copied today.