Vanessa Baird: If ever there were an end to a story that had no beginning 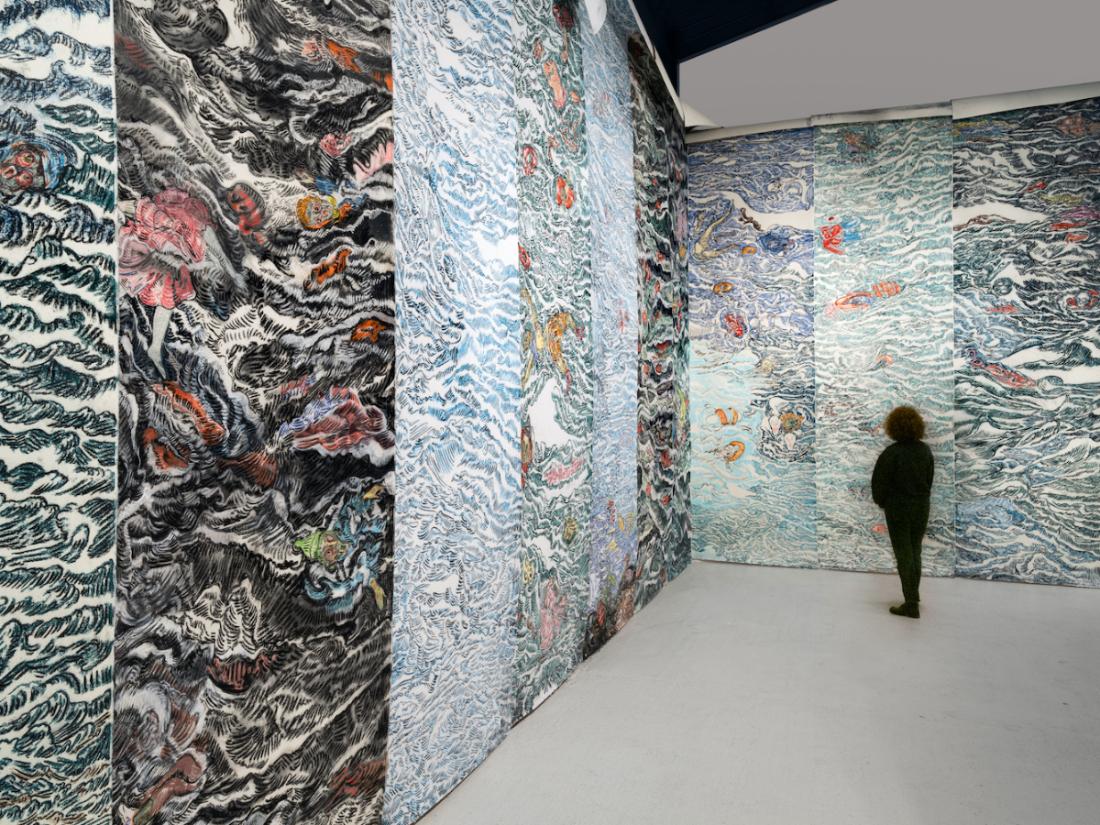 Vanessa Baird’s work is story telling of a kind that is both potently provocative and emphatically individual. Her charged creations, made in pastel and watercolour, range from room-size murals to intimate self-portraits and draw on a wide range of references from her own lived experiences, as well as from Scandinavian folklore and literature. This exhibition, the artist’s first solo survey in the UK, introduces Baird’s world through a selection of her extraordinary drawings, made over the last six years, and includes an immense wall-size seascape created for the show.

A key series of works, entitled There’s no place like home, 2019-20, is centred on the Oslo house that she grew up in and still inhabits with her three teenage children and elderly mother, for whom she acts as carer. Through vivid images of herself and her family, Baird captures the states of exhaustion, boredom and frustration that accompany the everyday tasks of looking after a household, conjuring up the chaotic detritus of domestic life in a kaleidoscope of provocatively raw imagery: her ever-present mother is seen lying ghost-like in bed; half-dressed teenagers, attached to their mobiles, slump at the table. The artist portrays herself with honest vulnerability, as both a mother, daughter and carer, explicitly describing the taboo subjects of intimate bodily functions and the ageing female body. Her work is underpinned by a dark sense of humour, with scenes made more menacing by Baird’s use of pictorial foreshortening and angled perspectives; her figures are compressed into claustrophobic spaces that draw the viewer unavoidably into nightmarish psychodramas.

A prolific artist, Baird often makes work on a scale that is physically demanding. Central to this exhibition is a mammoth drawing, A little red coat, a pair of beautiful blue trousers and a green umbrella lost at sea, 2020, twelve paper scrolls that wrap the gallery walls, stretching four meters in height and more than 14 meters across. Made for this exhibition, it evokes Japanese ink scrolls of mountains and seascapes; her gestural handling of watercolour and fluidly drawn line owes something to Hokusai, an artist she admires. Whilst Baird’s work is rooted in the autobiographical, here her scope widens: disturbing scenes of figures drowning in the waves might be informed by Norwegian folklore, pervaded by legends of the sea, as well as referencing international political issues such as the European refugee crisis. Equally, the sea might represent personal psychological tumult, a feeling of being swept away or overwhelmed. Baird has never shied away from tackling difficult and controversial subjects in her work and these ambiguous images can be read as being both candid and confrontational.

Also included in the exhibition is Red Herring Prednisolon ciclosporin, 2014-18, a series of intimate self-portraits in watercolour, made over a period of four years whilst the artist was being treated for a chronic illness. These works beautifully communicate the extreme physical and emotional effects the medication had on her: her bloated face and bleary eyes, expressing anguish and pain, stare out at us from her fiercely red and raw face, whilst in another portrait, bleached of colour, her features ebb away into a kind of miasma. Every title records the different medication and precise dosage that caused these unpleasant side effects, giving this powerfully unsettling series a scientific air. Baird’s highly personal responses to themes around the female body – from motherhood, to illness, to ageing – continues a curatorial focus on the body and bodily experience threaded throughout Drawing Room’s programme for 2020–21; she handles these themes in a uniquely unforgettable and searingly provocative manner, which we are thrilled to be sharing with a UK audience for the first time.