The Unsettling Portraiture of Miss Meatface 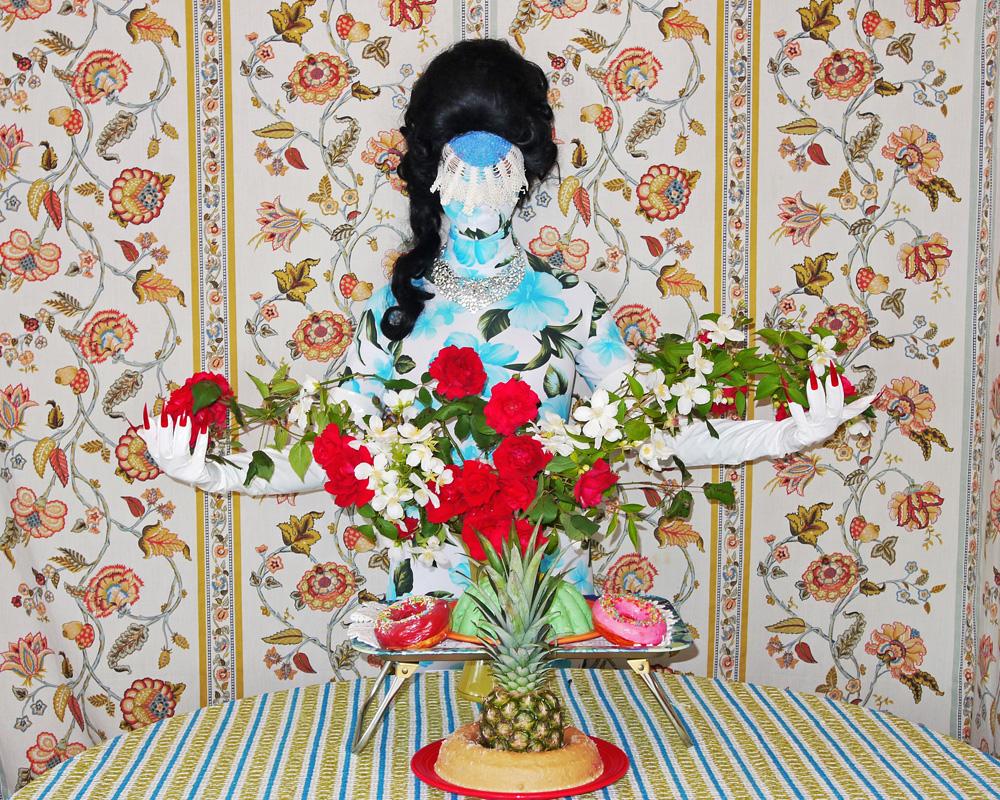 The Untitled Space is pleased to present a special exhibit and event with Artist Kat Toronto aka Miss Meatface, who will be visiting from London, UK for an artist talk, zine signing and solo exhibition curated by gallery director Indira Cesarine launching on July 2nd, 2019. The exhibit, which features a selection of artwork created over the last several years, including photography, ceramics, zines, and videos, will additionally be on view from July 8-13, 2019.

Kat Toronto, AKA “Miss Meatface” is a multidisciplinary artist hailing from the San Francisco Bay Area who works in performance-based photography. She uses her often unsettling and surreal images to explore cultural ideals of feminine beauty and the objectification of women in a feminist society by toying with the push and pull of dominance and submission, as well as the acts of revealing and concealing. Diagnosed with a rare form of cervical cancer in 2010 that eventually led to a full hysterectomy in 2013, Kat uses the name “Miss Meatface” as an artistic and spiritual catalyst to delve into a complex set of questions about where she now fits into society as a woman. Kat currently resides in London, England.

Her work has previously been featured in The Untitled Space group shows EDEN, (HOTEL) XX, SECRET GARDEN, SHE INSPIRES, UPRISE/ANGRY WOMEN, and ONE YEAR OF RESISTANCE, all curated by Indira Cesarine. 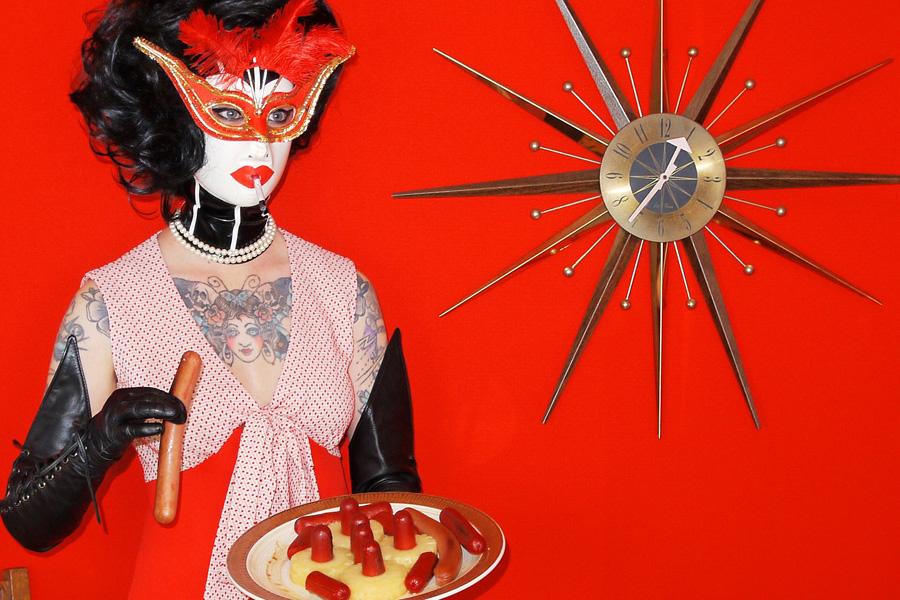 ARTIST STATEMENT
"My photographic persona Miss Meatface began in mid-2014 as an artistically therapeutic outlet for me while I was going through a particularly brutal period in my life: a year before I'd undergone a full hysterectomy for cervical cancer and my marriage was ending. The surgery had left me confused and conflicted, long after my body had physically healed my mind was still reeling from the experience. On the outside I looked just like any other person, but on the inside I no longer possessed certain organs that society seemed to place an enormous amount of importance on. So I began using photography - self portraiture in particular - as a way to explore concepts of sexuality, feminine beauty, and gender roles in an effort to try and dissect all of these complex thoughts that had been riddling my mind. Miss Meatface has since evolved into a larger than life personality and I continue to use her as a creative means to explore my own sexuality and the stereotyping of gender and gender roles in society as a whole." – Kat Toronto aka Miss Meatface 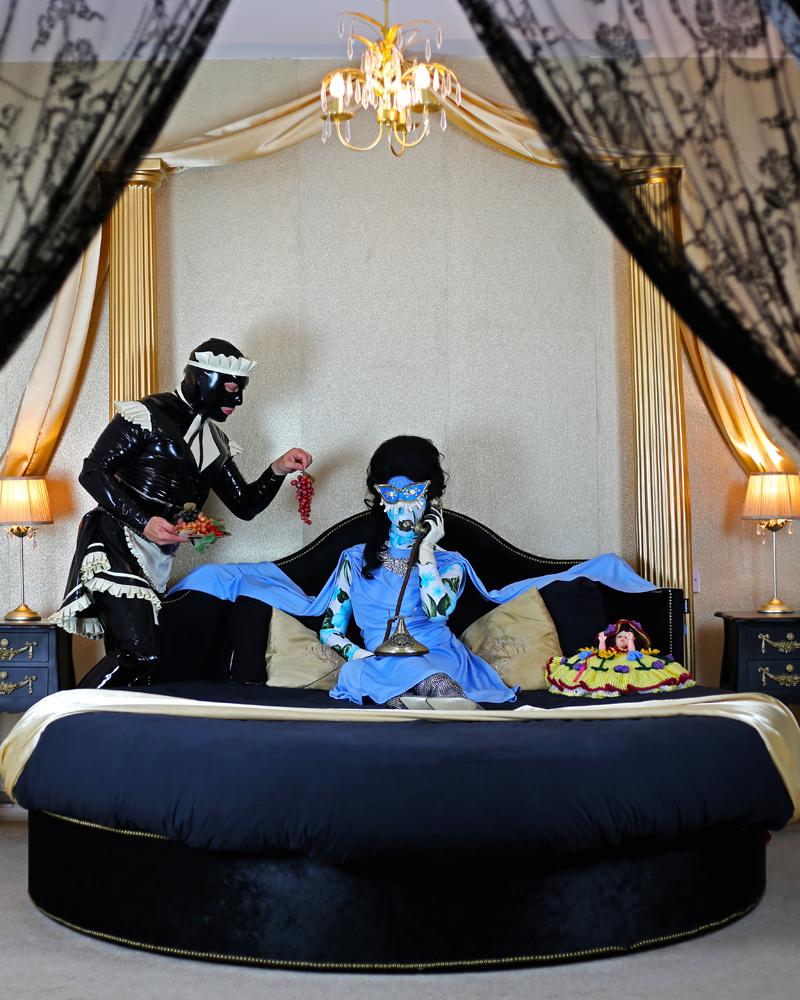 “Celebrated 19th century art critic John Ruskin described orchids as “prurient apparitions” and made it no secret his disdain for his fellow Victorians’ obsession with this “over-sexualized” flower. While shooting the photographs featured in the zine I came to realize that the images, much like Ruskin’s orchids, were dripping with an ethereal prurience deeply rooted in my own sexuality and the sensual, sexual world of flowers. Thus the title of the zine as well as the overarching concept, Prurient Apparitions, was born and brought to life through the fantastical world of my photographic alter-ego Miss Meatface.

Many of the photographs are double exposures created through the use of a Polaroid OneStep+ camera (I also occasionally used a vintage Polaroid Impulse camera as well) which I then scanned and digitally pasted into pages of found antique Victorian photo albums. When putting the images together I wanted each to play off of one another in a push and pull game of vulgarity and beauty, decadence and divinity, mystery and suggestion. Ultimately, I wanted to assemble them in a way that would titillate and intrigue, as well as dazzle the viewer just as a wild orchid might if stumbled upon unexpectedly in a meadow.”

ABOUT THE UNTITLED SPACE
The Untitled Space is an art gallery located in Tribeca, New York in a landmark building on Lispenard Street. Founded in 2015 by Indira Cesarine, the gallery features an ongoing curation of exhibits of emerging and established contemporary artists exploring conceptual framework and boundary pushing ideology through mediums of painting, sculpture, printmaking, photography, video and performance art. The gallery is committing to exploring new ideas vis-à-vis traditional and new mediums and highlights a program of women in art as well as special events aligned with our creative vision.

ABOUT CURATOR INDIRA CESARINE
Indira Cesarine’s work as a curator for The Untitled Space gallery includes solo shows for artists Sarah Maple, Rebecca Leveille, Alison Jackson and Fahren Feingold as well as group shows "EDEN" and "(HOTEL) XX" at SPRING/BREAK Art Show; ”SECRET GARDEN” presenting the female gaze on erotica; “SHE INSPIRES,” a group show of 60 artists exhibiting works honoring inspirational women; internationally-celebrated group shows “UPRISE/ANGRY WOMEN,” and “ONE YEAR OF RESISTANCE” responding to the political climate in America since the election of Trump, as well as numerous other critically-acclaimed exhibitions.