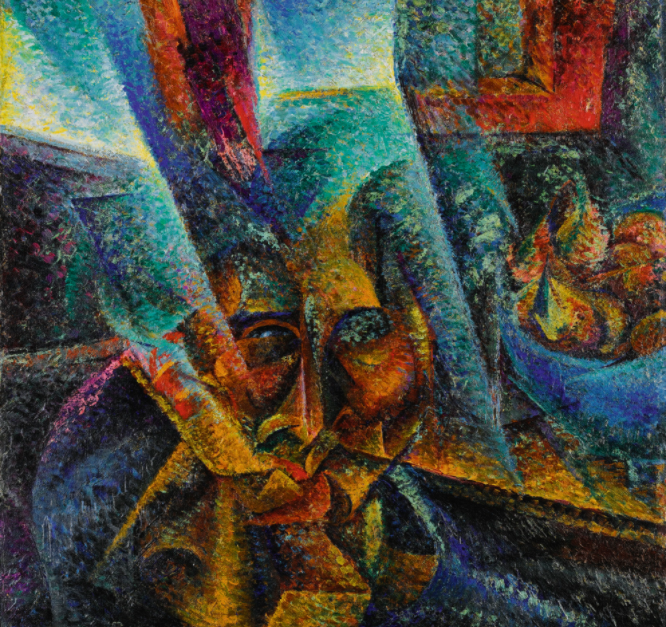 'The time has passed for sensations in painting to be whispered. We wish them in future to sing upon our canvases in deafening & triumphant flourishes’

Helena Newman, Global Co-Head of Sotheby’s Impressionist & Modern Art Department & Chairman of Sotheby’s Europe, said: “It is incredibly rare for Futurist paintings by Boccioni to appear on the market and this work represents the essence of his artistic dynamism. The intense moment of creativity within which Boccioni pioneered the Futurist movement was tragically cut short, so there are very few of his stunning paintings in existence. With the majority of these now housed in museums including MoMA and the Museo del Novecento in Milan, collectors around the globe will recognise this once in a generation opportunity to acquire a major Futurist painting.”

London, 11 February 2018 – A leading figure among Italian Futurists alongside Severini, Balla and Marinetti, Boccioni played a pivotal role in shaping the visual aesthetic of this short-lived yet highly influential movement. The radical pictorial vocabulary of Futurism developed in parallel with other revolutionary movements, including Cubism and Expressionism, changing the course of Western art. Upsetting centuries of tradition, Boccioni led the way in an influential movement that was assertive, participatory and daring. Painted just four years before his tragic early demise in the First World War, Testa + luce + ambiente encapsulates the artistic innovation of depicting velocity and experience, which was spearheaded by the artist. This three-word title (which translates as ‘head + light + atmosphere’) captures the essence of Boccioni’s artistic thesis, as he takes the human figure and sets it in a direct shaft of light – resulting in the fusion of form and atmosphere. The multifaceted figure at the heart of this composition is wholly subsumed into the surroundings; she is everything and everywhere and so we perceive all of the elements together simultaneously.

This seminal work will be offered at auction for the first time, as part of Sotheby’s Impressionist & Modern Art Evening Sale on 28 February.

‘Our pictures, next to those of museums, will shine like dazzling daylight compared with deepest night’

In 1912, the Futurists issued a literal call to arms for artists celebrating the modern world in a very radical way. The movement demanded a definitive break with the art of the past, centred on a desire to ‘re-enter life’ through a focus on the speed, noise, machinery and violence of the new century. An intrinsic part of being modern was creating uproar. Boccioni and his fellow Futurists set out to provoke, with their theoretical manifestos, lectures and performances.

Boccioni travelled to Paris in 1911, where he drew inspiration from and reacted against the innovations of Parisian avant-garde artists, coming into contact with the Cubist art of Picasso and Braque. Combining the rigid and ‘pure’ geometry of Cubism with the intuitive, spiritual and personal impulse of Futurism, the artist achieved both fragmentation of form and a visual clarity.

Boccioni’s paintings focused on the human – and individual – experience. He was interested in the idea of movement or dynamism within an object and so perceived each object or figure within a constantly shifting framework of colour and light. Indeed, light itself became a formal subject equal to any other element of the composition. As the first to develop Futurist sculpture, Boccioni’s new awareness of the three-dimensional introduced a new volumetric plasticity to his painting.

A casualty of the First World War, Boccioni’s life was cut short at the age of 33. The movement he led, though short lived, proved extremely influential on the evolution of modern art. In 1949, the Museum of Modern Art in New York staged an exhibition on Twentieth-Century Italian Art, in which Boccioni was by far the most represented artist. Over half a century later, his sculpture Unique Forms of Continuity in Space adorns the Italian mint of the 20-cent euro coin.

Testa + luce + ambiente was first acquired by Bruno Corradini, an Italian writer and screenwriter closely associated with the Futurists. It then went to prominent journalist and art critic Margherita Sarfatti, in whose family collection it remained for over fifty years.