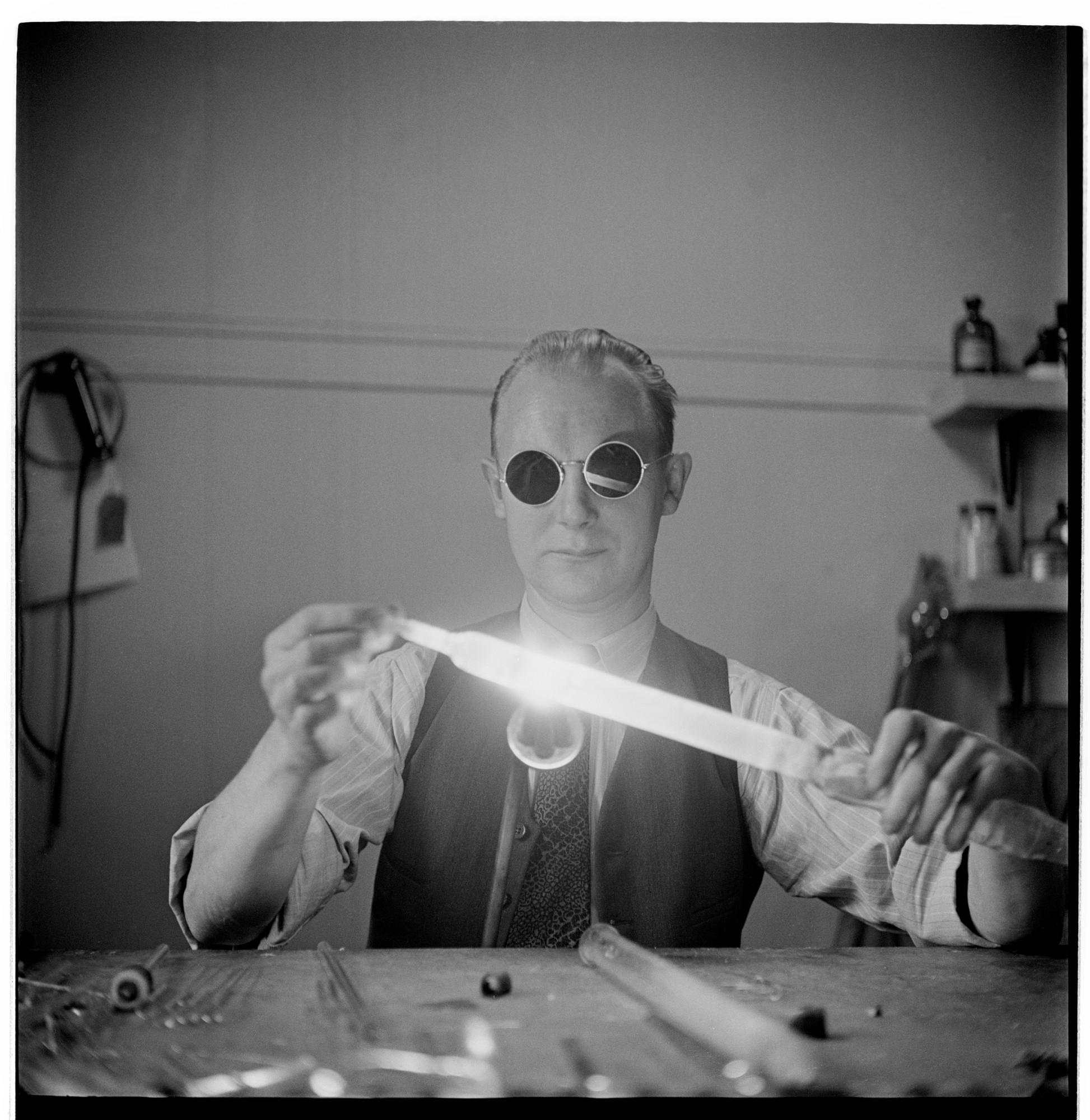 Museum of the City of New York and SK Film Archive

LOS ANGELES, CA — For those who know him as a filmmaker, Stanley Kubrick’s early stint as a photojournalist is a revelation. In 1945, the future director of iconic films such as Dr. Strangelove (1964), 2001: A Space Odyssey (1968), A Clockwork Orange (1971), and The Shining (1980) was just a teenager—one with an uncanny photographic sensibility who began scouting human-interest stories for the pictorial magazine Look. This fall, the Skirball Cultural Center presents Through a Different Lens: Stanley Kubrick Photographs. This exhibition explores this formative phase in Kubrick’s career, during which he cultivated his innate talent for storytelling and image-making. On view will be more than 130 photographs that serve as clear indicators of how an amateur photographer from the Bronx would come to make some of the greatest movies of all time. The exhibition will be on view at the Skirball from October 17, 2019 through March 8, 2020.

Stanley Kubrick (1928–1999) was only seventeen when he sold his first photograph to Look. It was an image of a dejected newsstand vendor the day after the death of President Franklin D. Roosevelt. In his subsequent photographs, many of them unpublished, Kubrick trained his camera on the nightclubs, street scenes, and sporting events that made up his first assignments. Capturing everyday life with a sophistication that belied his young age, he produced work that was far ahead of his time and focused on themes that would inspire him throughout his creative life. As the exhibition illustrates, Kubrick’s photography laid the foundations for his cinematography: through the camera lens, he learned to be an acute observer of human interactions and tell stories through images in dynamic sequences. 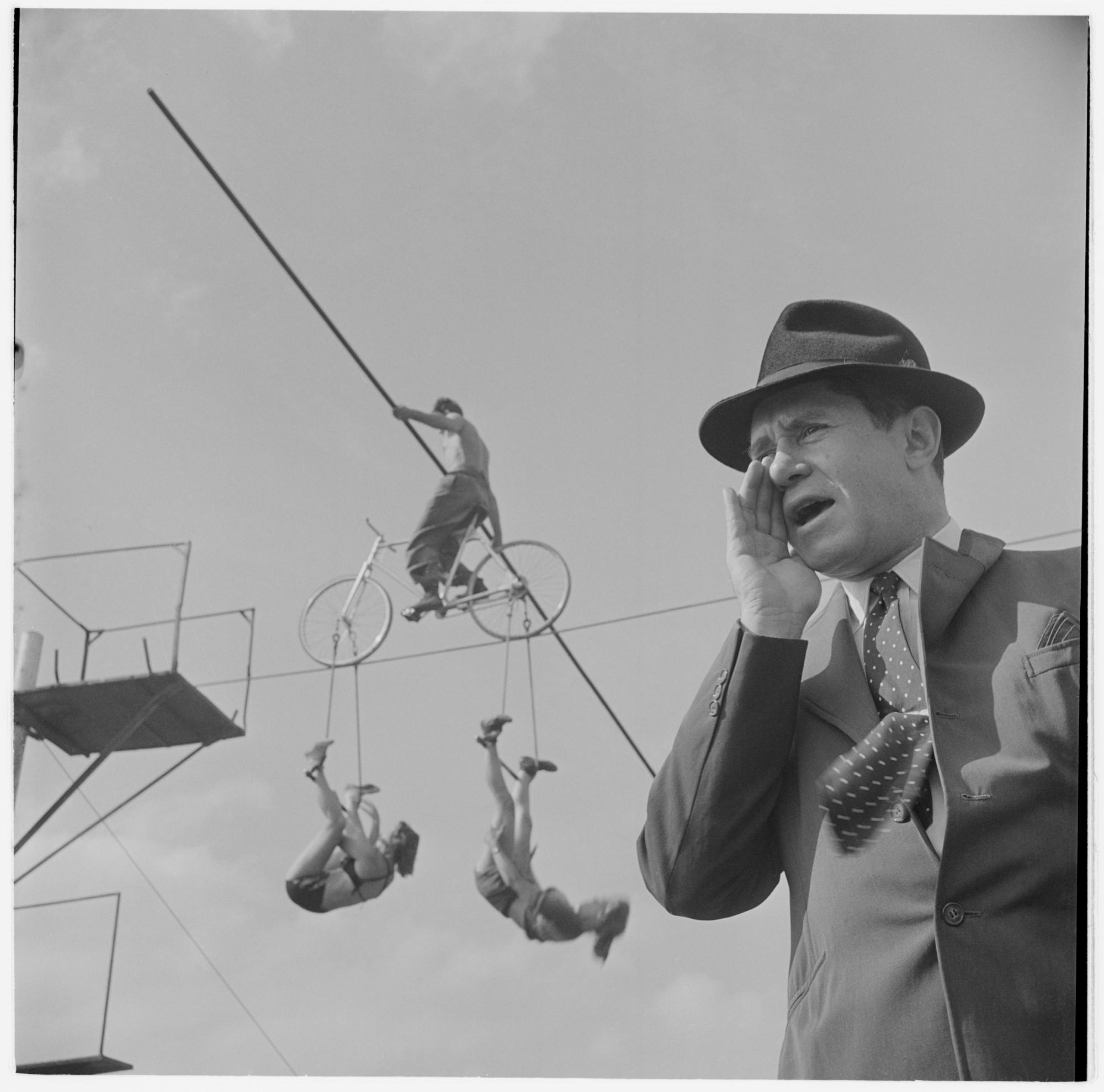 Museum of the City of New York and SK Film Archives

Stanley Kubrick, How the Circus Gets Set, 1948. Museum of the City of New York. The Look Collection.

Organized by the Museum of the City of New York (MCNY) in collaboration with the SK Film Archives LLC, Through a Different Lens: Stanley Kubrick Photographs draws from the museum’s extensive Look magazine archive. The photographs are exhibited alongside the Look issues in which they appeared, providing the journalistic context in which Kubrick’s photographs were viewed by the general public. The exhibition follows along as Kubrick took a kaleidoscopic view of city life, from the gritty to the glamorous. In these images of celebrities and everyday people alike, Kubrick revealed the hundreds of human dramas unfolding at any moment.

Exhibition Overview
Photography opened Stanley Kubrick’s doors to the world. Growing up in a predominantly Jewish neighborhood in New York City, young Kubrick was immersed in an urban setting that was the backdrop for everyday stories acted out by everyday people. His parents, who were the children of Jewish immigrants, had hoped Stanley would excel in school, but he was indifferent to academics. Stanley was thirteen when his father bought him his first camera, a Graflex, and he dedicated himself to the pursuit of photography.

Through a Different Lens: Stanley Kubrick Photographs introduces visitors to four key themes that shaped Kubrick’s early work as a photographer and to which he would return time and again throughout his film career:

The exhibition then proceeds chronologically through his time at Look, where he worked on assignments both published and unpublished. It frames Kubrick’s investigations of photography’s narrative capabilities and showcases his aptitude for translating an individual’s complex life into visual form. 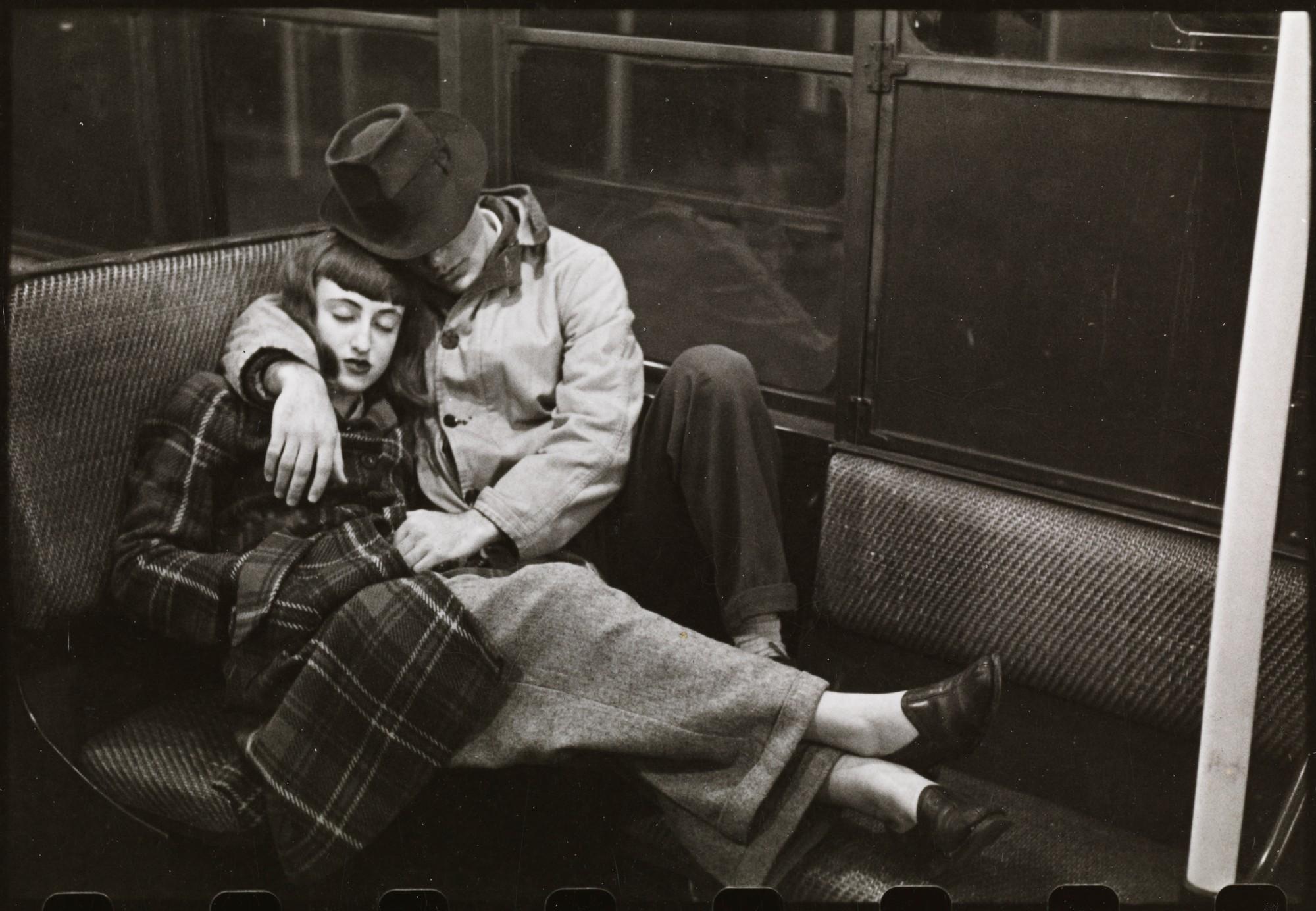 © Museum of the City of New York and SK Film Archives

Stanley Kubrick, Life and Love on the New York City Subway, 1947. Museum of the City of New York. The Look Collection.

For an emerging photographer like Kubrick, there was no better place to be at that time than New York City, home to the nation’s two leading pictorial magazines, Life and Look. After Kubrick graduated from high school in 1946, Look hired him as an apprentice. Kubrick’s name first appeared on the masthead as staff photographer in the issue dated January 7, 1947. His first extended assignment, “Life and Love on the New York Subway,” was published two months later. 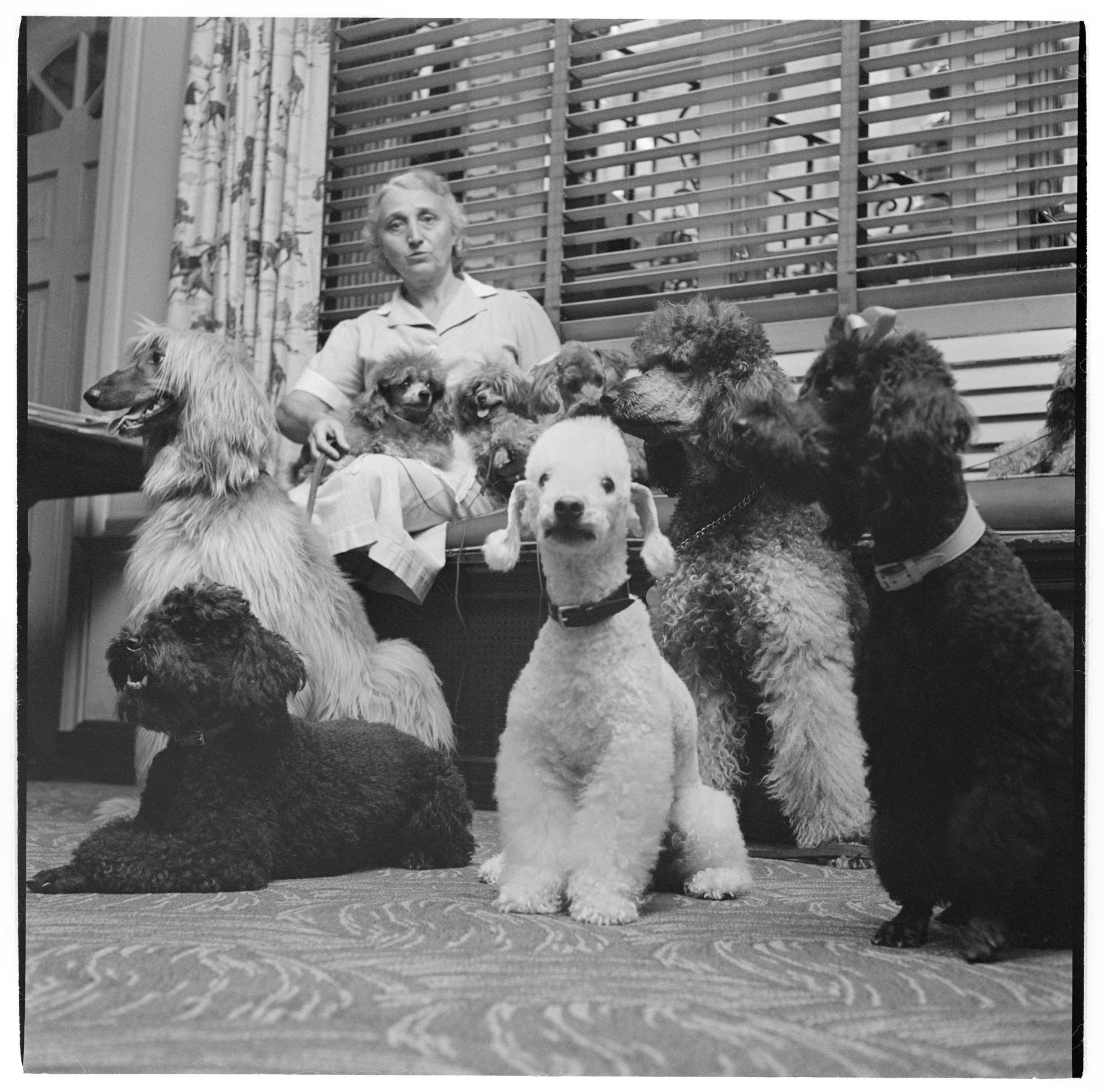 Museum of the City of New York and SK Film Archive

Stanley Kubrick, A Dog's Life in the Big City, 1949. Museum of the City of New York. The Look Collection.

In the fall of that year, Kubrick began working on more narrative-based assignments. By 1949, he had hit his stride on the pages of Look. His contributions ranged from quirky, only-in-New-York stories—on pampered city dogs or an innovative paddy wagon, to name just two examples—to extended profiles of famous cultural figures. For an aspiring filmmaker, what was especially valuable was the chance to cover post-war American entertainment—from cartoonist Peter Arno, actor Montgomery Clift, and bandleader Guy Lombardo to the rising new medium of television. In 1950, the last year in which he published his photographs extensively in Look, Kubrick created a series of celebrity profiles. His subjects were composer-conductor Leonard Bernstein, late-night television personality Faye Emerson, and boxer Rocky Graziano, among others.

Through a Different Lens: Stanley Kubrick Photographs culminates in an epilogue that probes the connections between Kubrick the photographer and Kubrick the director. In 1950, he produced photo-essays that explored themes of teen love, teen dating, and marital jealousy. He directed these proto-cinematic articles, for which he posed high-school students to “star” in the teen stories and actors to dramatize the marital story.

This final section also gives visitors the chance to watch Kubrick’s first independently produced documentary, Day of the Fight (1951), which he began working on while completing his tenure at the magazine. The film was based on his 1949 Look article titled “Prizefighter,” on boxer Walter Cartier. Kubrick’s photographic work for the article became the storyboard for the film, enabling him to work out the scenes, camera angles, framing, and lighting before he began shooting. Kubrick maintained this practice of storyboarding from photographs throughout his career. This is evident in an excerpt from his second feature film, Killer’s Kiss (1955), which will also be screened in the gallery. Killer’s Kiss owed a great debt to the film noir aesthetic and subject matter that Kubrick explored at Look.

Related Publication
The exhibition Through a Different Lens: Stanley Kubrick Photographs is accompanied by a 332-page large-format book published by TASCHEN in 2018. The book’s authors are the curators of the exhibition—Donald Albrecht, MCNY Curator of Architecture and Design, and Sean Corcoran, MCNY Curator of Prints and Photographs—as well as writer and critic Luc Sante. The book will be available for sale at Audrey’s Museum Store at the Skirball.