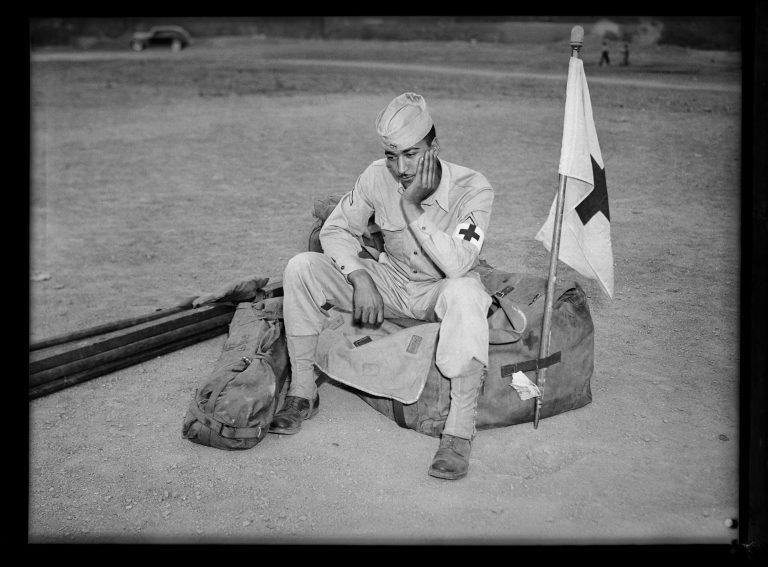 During World War II, Charles “Teenie” Harris photographed thousands of African American soldiers who fought for a nation that didn’t always fight for them. Separated by years of Army service, Master Sergeant Eugene Boyer Jr. and former Staff Sergeant Lance A. Woods have selected 25 Harris images that speak to their experiences—the honor of military service, and the sacrifices that the families of service members make.

In addition, Harris photographed more than 1,000 soldiers in his studio over the course of his career. Many of these portraits remain unidentified. As part of Service and Sacrifice, the Teenie Harris Archive will make a selection of images available, and seek information about these individuals. Visit the exhibition, or contact 412.622.1011 for more information.

Teenie Harris was one of the great photographers of the 20th century, and his body of work stands as one of the most detailed records of the black urban experience. His photographs of service members, as well as of efforts on the home front, tell stories of black soldiers fighting for the American promise of civil liberties, and the opportunity for a better future. 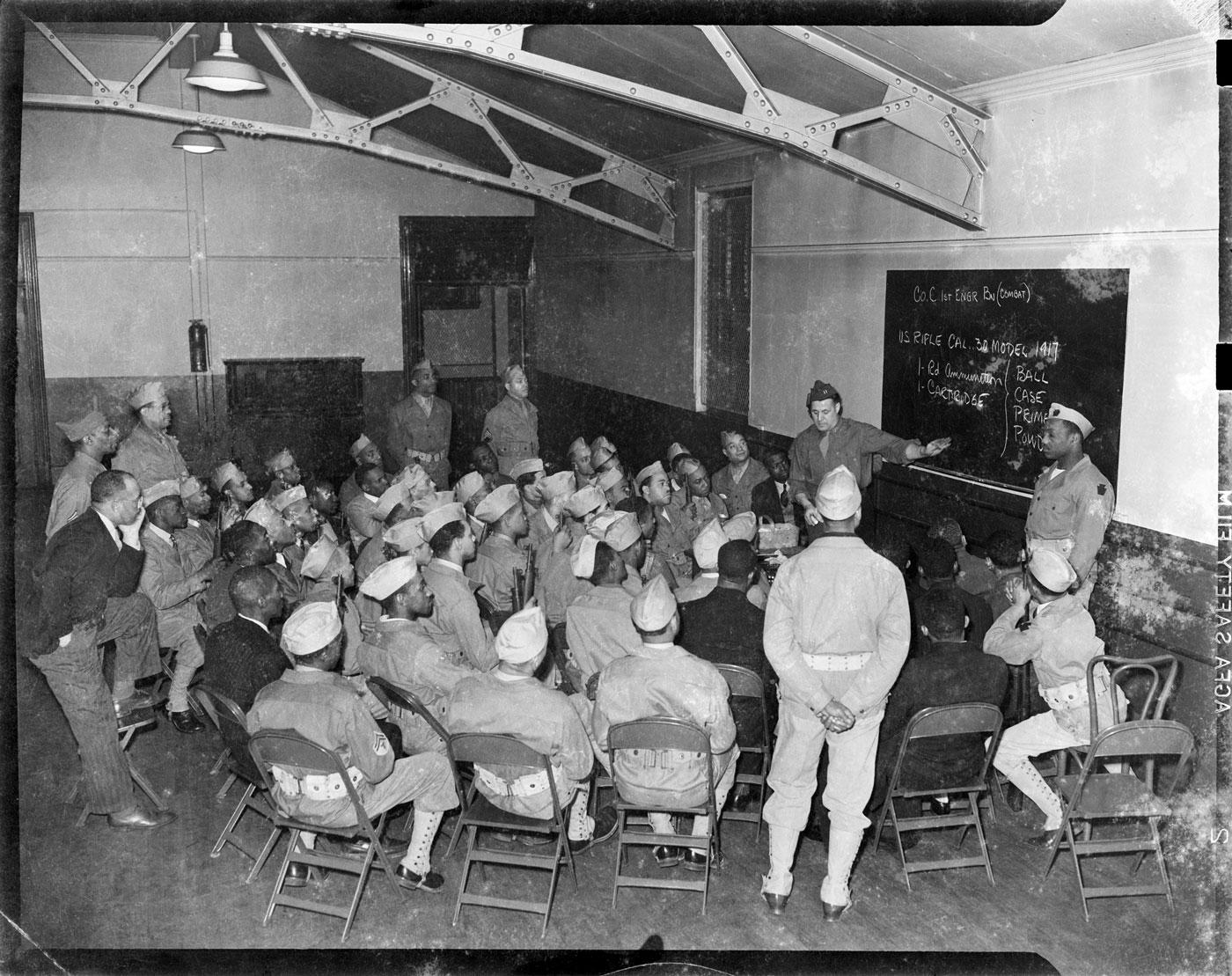 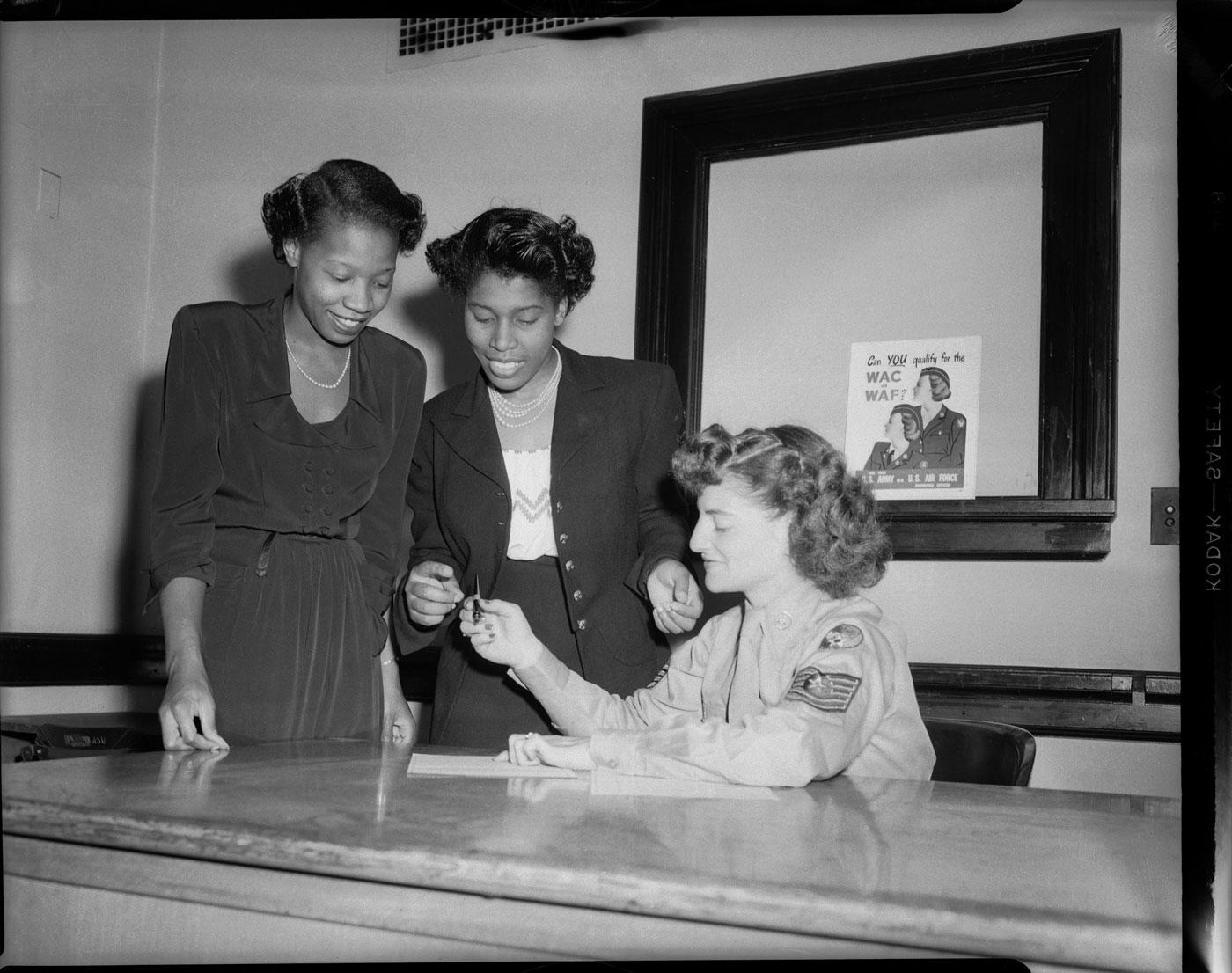 Charles “Teenie” Harris, ‘Woman wearing military uniform, with two other women, and sign in background reading “Can YOU Qualify of the WAC or the WAF?”‘ c. 1949.

“During World War II, this country was segregated. If you were a black draftee, you in most cases went to the South to be trained in the South. Your officers were mostly white and mostly Southern, and they were picked because of their Southern background, because it was assumed that they knew how to handle you. There were times when the enemy was nicer than the person who commanded you.

“Today, I would recommend any of our military services to a young black person looking for a career. It’s not easy. It calls for a lot of dedication, concentration, and a love of country. But this is America. This is all our home.” —Eugene Boyer Jr.

“Harris preserves the legacy of black patriotism in Pittsburgh during a time of visible discrimination. His lens permits us to witness the valor and sacrifice of black women and men in our military.

“Working on this exhibit, I tried to put myself in the shoes of black patriots who served during the Jim Crow era. I questioned whether their sacrifice for America afforded them any of its fundamental protections and promises. I questioned how they endured the indignity of being a “solider” abroad but a “boy” at home. Most of all, I questioned how they reconciled their allegiance to America with its long, violent history of subjugating black citizens.

“Nearly 70 years after President Truman desegregated the armed forces, these questions still cause a personal rift. When loyalties to my heritage and my veteran status threaten to tear me apart, I am empowered by the perseverance and triumphs of black patriots who served before me. Listening to veterans like Mr. Boyer and my grandfather, Sidney Ivory, I learn that my pride in my heritage is not compromised by a willingness to serve my country.” —Lance A. Woods

The Teenie Harris Archive at Carnegie Museum of Art is generously supported by the Richard King Mellon Foundation.

CMOA creates experiences that connect people to art, ideas, and one another. We believe that creativity is a defining human characteristic to which everyone should have access. CMOA collects, preserves, and presents artworks from around the world in order to inspire, sustain, and provoke discussion, and to engage and reflect multiple audiences. Our world-class collection of over 30,000 works emphasizes art, architecture, photography, and design from the 19th century to the present. One of the four Carnegie Museums of Pittsburgh, Carnegie Museum of Art was founded by industrialist and philanthropist Andrew Carnegie in 1895.