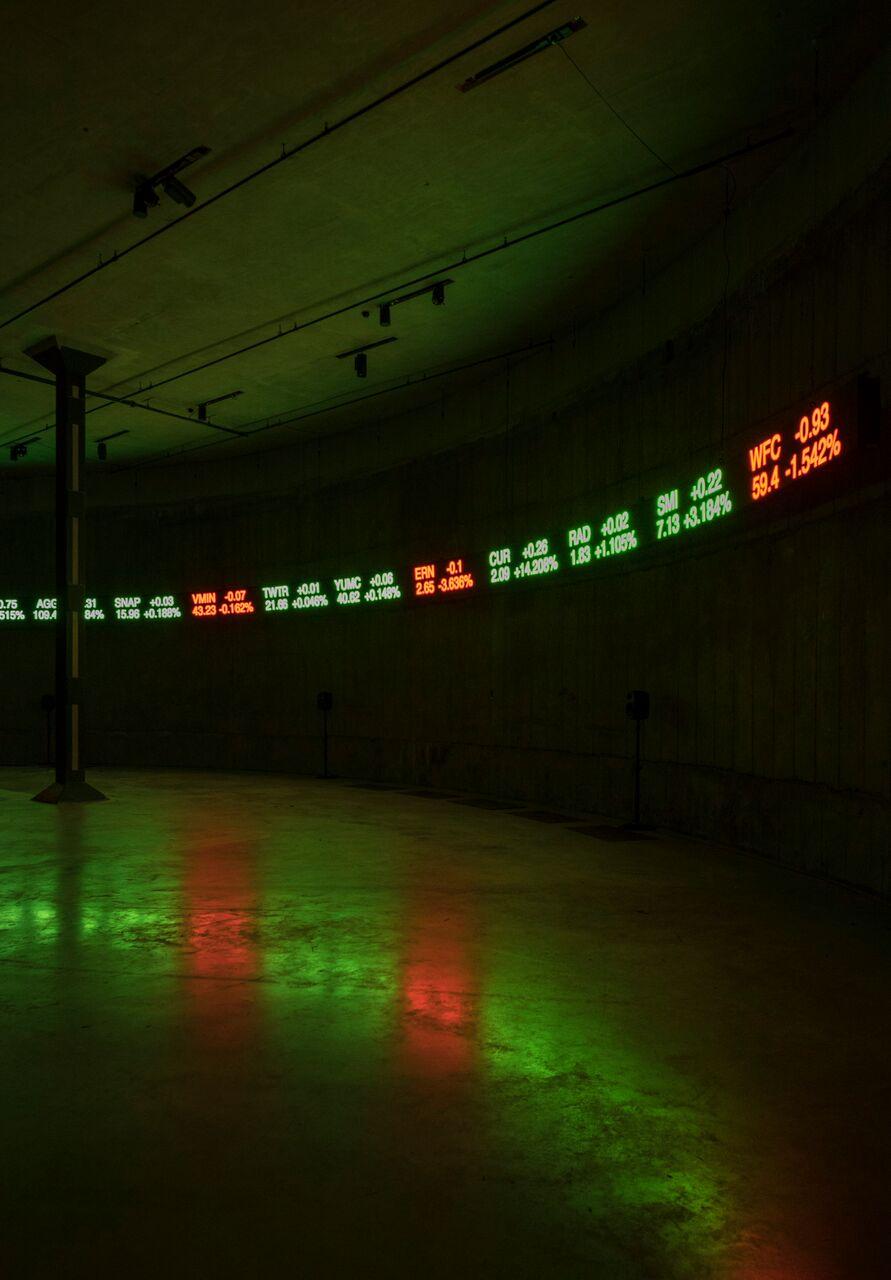 Tate Modern opened two major works in the Tanks today. Emeka Ogboh’s immersive, multichannel sound installation, The Way Earthly Things Are Going 2017, fills the subterranean East Tank in the Blavatnik Building. This installation is on display for the first time in the UK following its debut at documenta 14 in Athens. In the South Tank, The Lightning Testimonies2007, a powerful eight-channel, digital video installation by Indian artist Amar Kanwar is being exhibited. Both works will be on display until 4 February 2018.

Ogboh’s The Way Earthly Things Are Going, whose title is taken from a lyric in Bob Marley’s So Much Trouble in the World, features live-streamed stock exchange data which scrolls along the circumference of the Tank in 25 metres of red, green and blue LED displays. In tandem, a spellbinding, ancient Greek lament, When I forget, I’m glad, recorded specifically for the piece,is played through twelve speakers creating a polyphonic audio installation. The song conveys tales of exile, forced migration, and the search for a better life. Nominally taking the Greek economic crisis as its subject, the work engages with issues such as migration and the international financial crisis. The Way Earthly Things Are Going is being presented to Tate by Modern Forms and will begin the artist’s representation in Tate’s collection.

Kanwar’s The Lightning Testimonies 2007 confronts violence by questioning the use of sexual brutality in times of political conflict. As an artist and filmmaker, Kanwar tries to understand experiences of trauma and survival. Rather than representing people as victims, his work emphasises the possibility of resistance. The brutal split that created India and Pakistan in 1947 is the starting point for a layered exploration of women’s experiences in disputed terrains across South Asia. Going beyond documentary approaches, Kanwar’s reflective commentary examines the capacity for unspeakable horror alongside the resilience and dignity of those who suffer, and those who protest. The work is being purchased with funds provided by the South Asia Acquisitions Committee.

We are thrilled to present these two outstanding installations at Tate Modern in the Tanks: Emeka Ogboh’s The Way Earthly Things Are Going 2017 and Amar Kanwar’s The Lightning Testimonies2007. Both artists have attracted our attention for many years with their thought-provoking and ambitious practices. Ogboh’s piece was one of the most acclaimed works at documenta 14and has particular poignancy, power and relevance in our times. We are delighted that Ogboh will now be represented in Tate’s collection thanks to the generous gift of this work from Modern Forms. Thanks to Tate’s South Asia Acquisitions Committee, Kanwar’s searing piece which was first shown to great critical acclaim in Documenta 12 in 2007, will begin the representation of this important artist’s works in the national collection.

Emeka Ogboh was born in 1977 in Enugu, Nigeria, and is a sound and installation artist who lives and works between Lagos and Berlin. He began his career recording the sounds of Lagos and, transposing these to different environments, highlighting the intensity and complexity of his home city. Ogboh has gained increasing international recognition and his work has become more complex, addressing global, topical issues using sound, but also other media. In 2015 he was selected by Okwui Enwezor for the 56th Venice Biennale where he presented The Song of the Germans which comprises recordings of an African choir singing the German national anthem in their native languages. For documenta 14 in Kassel in 2017 Ogboh contributed Sufferhead Original 2017, a socially engaged and interactive work comprising 50,000 bottles of craft beer. Informed by the experiences and tastes of African expatriates in Europe, the beer recipe and accompanying subversive marketing campaign call into question notions of nationalism and identity.

Amar Kanwar was born in New Delhi in 1964, where he lives and works. Kanwar is a visual artist whose work in film and installation has been dedicated to generating space for debate and discussion around issues of social justice. Exhibited as film and multichannel projected installations, his work combines memory, literature and history in poetic, layered presentations. He addresses difficult topics as social oppression, sexual violence, class discrimination and the rights of indigenous populations. While rooted in South Asia, his work has international resonance; he has been invited to present at Documenta in four consecutive editions, most recently in Athens and Kassel in 2017 with a meditative new film, Such a Morning 2017. Kanwar adapts his installations to connect with diverse audiences, from local film clubs and associations where the topics are most urgent, to art exhibitions and film festivals around the world. Amar Kanwar has also been the recipient of many prestigious awards for his work.