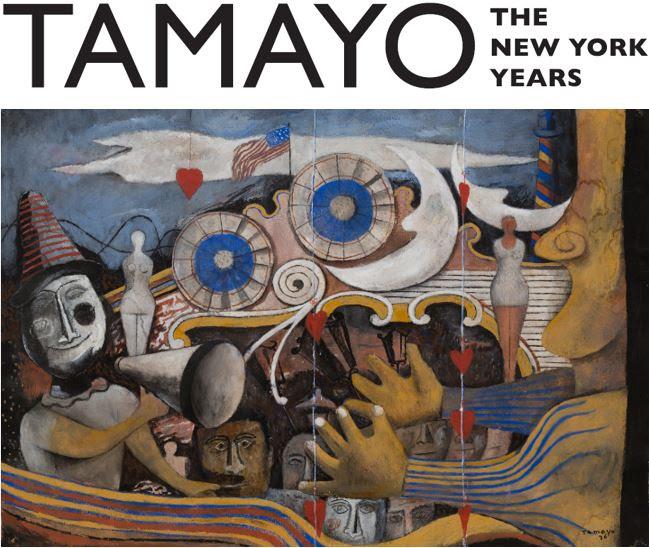 Rufino Tamayo (1899–1991), one of the most celebrated artists of the 20th century, was drawn to New York City at a time when unparalleled transatlantic and hemispheric cross-cultural exchange was taking place. “Tamayo: The New York Years” is the first exhibition to explore the influences between this major Mexican modernist and the American art world. It reveals how a Mexican artist forged a new path in the modern art of the Americas and contributed to New York’s dynamic cultural scene as the city was becoming a center of postwar art.

“Tamayo: The New York Years” brings together 41 of Tamayo’s finest artworks, including a number of key loans from public and private collections in Mexico, that place Tamayo at the center of a major shift in the history of 20th-century art. The exhibition offers a unique opportunity to trace Tamayo’s artistic development—from his urban-themed paintings depicting the modern sights of the city to the dream-like canvases that show an artist eager to propel Mexican art in new directions.

E. Carmen Ramos, the museum’s deputy chief curator and curator of Latino art, organized the exhibition, which is on view at the museum’s main building from Nov. 3 through March 18, 2018. “Tamayo: The New York Years” is the latest in a series of projects at the museum that situates the art of the United States in a global context.

Tamayo lived in New York intermittently from the late 1920s to 1949. During this period, he befriended and exhibited with Reginald Marsh, Stuart Davis, Yasuo Kuniyoshi, Berenice Abbott and other New York-based artists who wanted to capture modern urban life. Tamayo, who had been interested in popular entertainment in Mexico, found in Coney Island a unique locus of modernity and the American experience. He depicted Coney Island several times, including in “Carnival” (1936), which was recently acquired by the museum.

Tamayo’s exposure to international modernism in New York, coupled with his firsthand study of pre-Columbian and Mexican folk art, led him to his own synthesis of modernist styles and Mexican culture. Tamayo also crossed paths with younger American artists including Jackson Pollock and Adolph Gottlieb who, like him, would break ground with new modes of representation befitting the seismic social transformations of the midcentury period.

This exhibition considers how New York—its sights, artists, critics, collectors and art venues—nurtured Tamayo’s vision of modern Mexican art. In this context, he created an art that resisted clear narratives, emphasized the creative rather than political underpinnings of art making and mined the ancient myths and forms of indigenous art to express the existential crisis of World War II. In 1939, Tamayo saw Pablo Picasso’s “Guernica” (1937) at the Valentine Gallery and the influential artist’s retrospective at the Museum of Modern Art. Inspired by Picasso’s imagery and reliance on African art, Tamayo reconsidered the forms and myths of Mexico’s pre-Hispanic and folk art as the basis for a series of wartime paintings featuring aggressive and deprived animals. By the 1940s, his richly colored and abstracted compositions modeled an alternative “American” modernism that challenged social realism and dovetailed with a rising generation of abstract expressionists who were also seeking a visual language that fit their uncertain times.

“Tamayo’s New York story is a complex one that reveals how his immersion in the U.S. art world shaped his art and how in turn his presence had ripple effects in the broader art world,” said Ramos. “The rising abstract expressionists may not have emulated Tamayo’s style, but as they were beginning to assert a new direction in contemporary art, they drew resolve from his prominent example as an American artist driven by aesthetic and not overt sociopolitical concerns. Influence, in other words, comes in many forms. Tamayo, who absorbed the New York artistic scene and was transformed by it, also helped redefine notions of the national across the Americas at a crucial time in history.”

SYMPOSIUM
The Smithsonian American Art Museum is presenting a symposium that explores the meaningful interactions between Mexican and U.S. art and artists during the 20th century in conjunction with the opening of “Tamayo: The New York Years.” “’A line that birds cannot see’: Mexican/U.S. Art and Artists Crossing Borders in the 20th Century” will take place in the museum’s McEvoy Auditorium Friday, Nov. 3, from 9:30 a.m. to 5 p.m.

Taking Tamayo’s story as a point of departure, the program features new scholarship about the role of folk and indigenous art of the Americas in Pan-American modernism, sites and agents of intercultural exchange, the dynamics between Mexican and U.S. art during the Cold War and the fertile relationship between Chicano and Mexican artists. Ramos will present the opening lecture. Information about the daily schedule, participating scholars and lecture topics is available in the conference program. The program is free and open to the public, and will be webcast live. Pre-registration online is requested.

The title of the symposium is taken from Alberto Ríos’s poem “The Border: A Double Sonnet” (2015) and invokes the notion that art and ideas transcend political boundaries between nations and people. The Latino Initiatives Pool of the Smithsonian Latino Center provided support for the symposium.

FREE PUBLIC PROGRAMS
In addition to the symposium, the museum has organized a series of programs to complement the exhibition, including concerts and gallery talks. The museum’s award-winning ensemble-in-residence, the 21st Century Consort, will present “Howling at the Moon” featuring work inspired by Tamayo’s symbolic animal paintings and artworks evoking celestial themes Saturday, Nov. 4, at 4 p.m. for pre-concert discussion followed by a performance at 5 p.m. Ramos will give a gallery talk in the exhibition Wednesday, Nov. 29, at 5:30 p.m. and Wednesday, Jan. 24, at 5:30 p.m. A Tamayo Family Day will take place in the museum’s Kogod Courtyard Saturday, Jan. 13, from 11:30 a.m. to 3 p.m.

The Pasatono Orquesta Mexicana, dedicated to preserving and reinterpreting indigenous Oaxacan music on traditional instruments, will perform in the museum’s Kogod Courtyard Sunday, Dec. 3, at 2 p.m. The group will present their original compositions as well as those of Mexican composer Carlos Chávez (1899–1978), Tamayo’s lifelong friend who traveled to New York with the artist in 1926. Details about all the programs are available online at americanart.si.edu/tamayo.

BOOK
The richly illustrated catalog is written by Ramos and published by GILES in association with the Smithsonian American Art Museum. The book is available for purchase in the museum store and online ($59.95).

CREDIT
“Tamayo: The New York Years” is organized by the Smithsonian American Art Museum. We are especially grateful to His Excellency Gerónimo Gutiérrez-Fernández, the Mexican Ambassador to the United States, for serving as the honorary patron for the exhibition. The Mexican Cultural Institute of Washington, D.C., has provided invaluable advice and support. The Latino Initiatives Pool, administered by the Smithsonian Latino Center, provided major support. Additional generous contributions have been provided by The Honorable Aida Alvarez, Mrs. J. Todd Figi, the Robert S. Firestone Foundation, the Wolf Kahn and Emily Mason Foundation, the William R. Kenan Jr. Endowment Fund, the Sara Roby Foundation, Sam Rose and Julie Walters and the Smithsonian Scholarly Studies Grant Program.