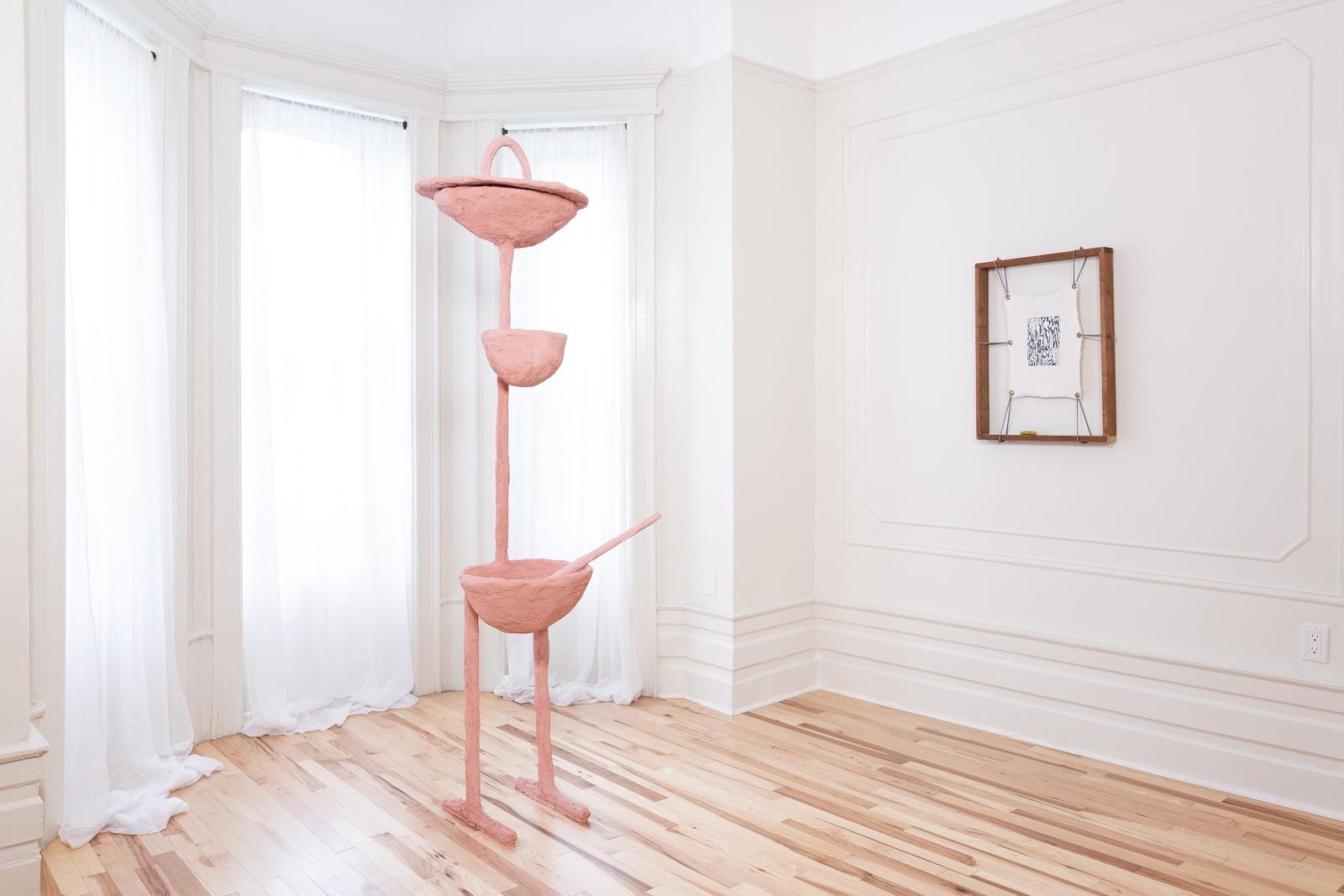 Stellarhighway, a space for viewing objects by a wide range of makers, is excited to announce our inaugural presentation. This presentation features paintings, drawings and sculptures by Oren Pinhassi, Manal Kara, Moises Salazar and Justine Kablack that explore the interchange of body, mind and psyche in the 21st century. An informal reception will be held on Sunday, July 25 from 2pm-4pm.

Oren Pinhassi’s large plaster and glass sculptures reference the architecture of queer sites where the private and public intersect. Through a blur of boundaries between humans and objects, the sculptures, corporeal and rough, invite viewers into a sensual landscape where bodies are simultaneously hidden and exposed. Pinhassi’s work imagines the political potential of the erotic as a poetic, yet architectural logic for the construction of objects and spaces. Three Basin Figure (NYC) (2019) is constructed of three bowls, or vessels, one paired with a spoon and another with a lid. Its looming form is reminiscent of a slender naked figure wearing a hat, but it evokes a place for public gathering and ritual.

By examining the intersection of their various identities, Moises Salazar addresses experiences that immigrants and queer individuals face in the United States. In their glitter work Ready (2020), Salazar captures the point of view of someone decorating their face, gazing into the mirror with makeup arranged neatly on the tabletop and sponge applicator, poised. In Maldita Primavera (2020) a purple figure reclines in bright green grass, inviting us into a swirling pink and white landscape, stripper heels forward and ready to play. In one painting the figure faces the viewer; in the other, the viewer is the figure in the painting, painting one’s face nonetheless. With both works framed in a crocheted lace, viewing is made to feel like the threshold of an intimate encounter.

Justine Kablack’s work revolves around ideas of shelter, survivalism, and space. In the words of artist Sam Finkelstein for Texte zur Kunst, “Portal III (2020) is a drawing propped up to eye-level by a skinny tree branch. [It] depicts chain-link fencing with a gaping hole in the middle. The links appear to be illuminated by a flashlight, but where one would typically see an abyss, we are instead presented with a shining blotch of darkness. This alluring, shimmering sheet, with stick support, taking on the form of a woodland looking glass, induces a psychic state that reflects and whispers what is essential to pure existence. While not technically a metal, graphite is the only nonmetal capable of conducting electricity. This elemental loophole confirmed my intuition that the works before me are conduits for energetic exchange.”

Manal Kara is engaged in a lifelong struggle with their mind, pushing toward habitation of their body. They disavow any “aboutness” in their art but quotes writer Hélène Cixous, saying, “‘I have the inclination for avowal.’” They expand, “In my art, I engage in acts of wild, unbridled, desperate, orgiastic avowal, trying to reveal something, as much to myself as to anyone else.” In 2017 Kara invited a benevolent inhabiting spirit called Slug Body into their person to attenuate anxiety and other symptoms. “It works because a slug is low, cleaves close to the earth, and stays wet. It saved my life. I want to get ‘Slug Body’ knuckle tattoos where each letter is a slug done by a different friend.” 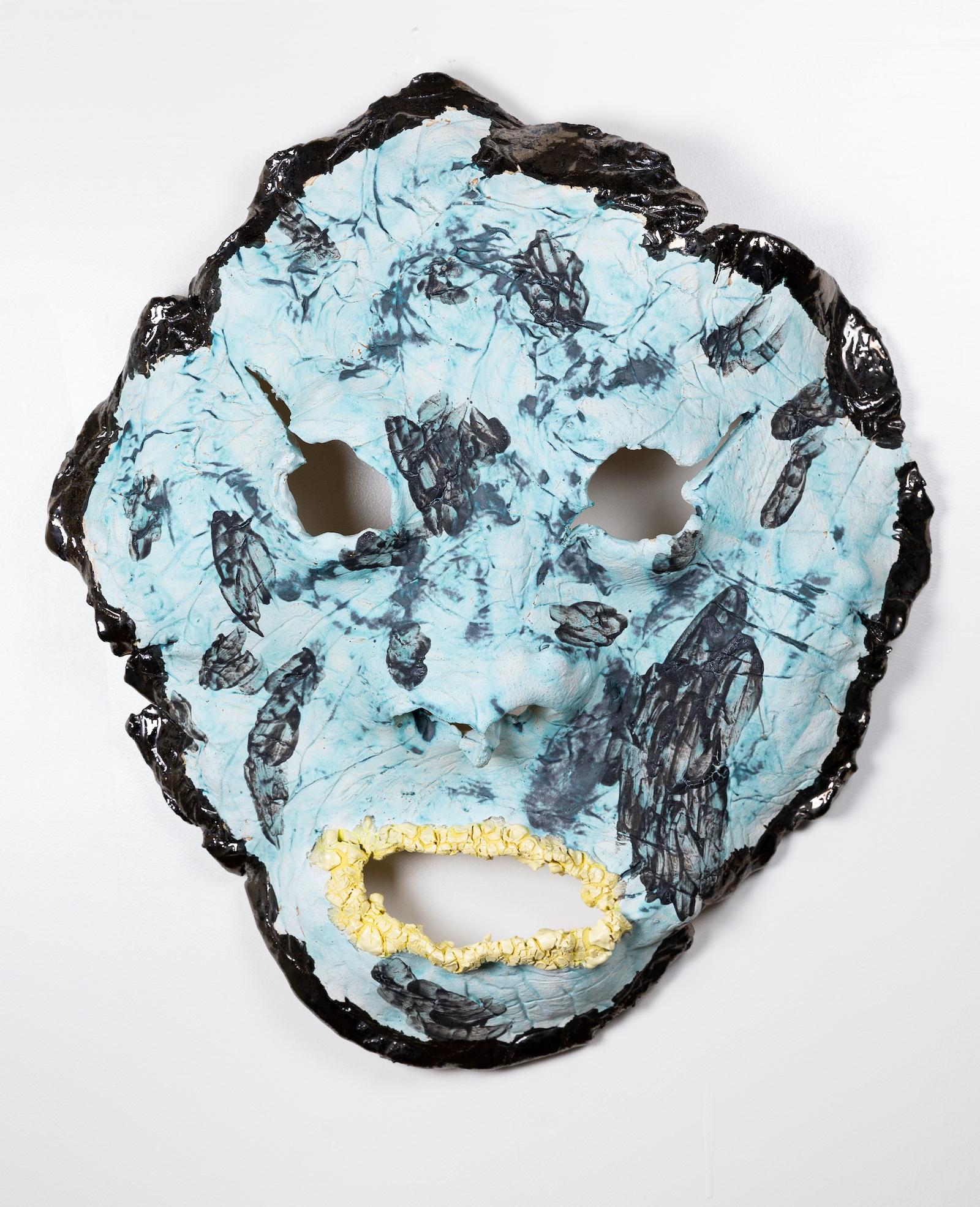 Justine Kablack graduated MICA in 2014 and attended BHQFU in 2017. Recent solo shows include whip-poor-will at Buoy Gallery, Kittery, ME and Where the Raspberries Grow Wild at SISTERED, Rockland, ME. Her work has been included in group shows including Theorem X at Rachel Uffner, New York; Theorem Y at Mrs., Queens; Jenna Ransom + Justine Kablack at Interloc, Rockland; Alley Oop at New Systems Exhibitions, Portland; and Tin Ceilings and Other Specifics at The Magenta Suite, Exeter. Residencies include Vermont Studio Center, Elephant Butte Lake and the Women’s Residency for Transmodern Awareness. Kablack is co-founder of the collective platform SISTERED, and works at the Center for Maine Contemporary Art. She resides in Rockland, ME.

Manal Kara is a Moroccan-American self-taught interdisciplinary artist. Their work has been included in group shows around the world, including Chicago, New York, Istanbul, Vienna and Berlin. Recent solo exhibitions include XYLEM & PHLÖEM at No Place, Columbus; THE VIEWING-ROOM VS. THE ADORING-GAZE at Interstate Projects, Brooklyn; and Song of the Other Worm at Prairie, Chicago. Selected group exhibitions include Jupiter Finger at Real Pain, Los Angeles; Suspended Disbelief at Arsenal Contemporary, Toronto; and K as in Knight at Helena Anrather, New York. They have participated in residencies at ACRE, Ox-Bow, September Spring at the Kesey Farm, and Project Freewill. Upcoming solo exhibitions include Below Grand (formerly Super Dutchess), New York; Shulamit Nazarian, Los Angeles; and Hair + Nails, Minneapolis. Manal Kara is based in Gary, IN.

Oren Pinhassi graduated from the Yale School of Art in 2014. He has taught sculpture nationally and internationally in various institutions. Recent solo shows include Lone and Level at Helena Anrather, New York; Second Nature at Edel Assanti, London; One in the mouth and one in the heart at Skibum MacArthur, Los Angeles; Nature Calls at Ribot Gallery, Milan; and Springs at the Petach Tikva Museum of Art, Israel. His work was featured in numerous group shows including Four at Yossi Milo Gallery, New York; This Is Not A Prop at David Zwirner Gallery, New York; A Scratch In Time, Thierry Goldberg Gallery, New York and more. Residencies include Palazzo Monti, Brescia; Outset Contemporary Art Fund’s Bialik Residency; the Shandaken Project at Storm King Sculpture Park, New York; and the Skowhegan School of Painting and Sculpture. Pinhassi has been awarded numerous prizes including Pollock-Krasner grant; Fannie B. Pardee Prize; The Art Slant Prize, and the Shlomo Witkin Prize, 2011. Upcoming solo shows include Commonwealth and Council, Los Angeles. Pinhassi lives and works in New York City.

Moises Salazar is a non-binary queer artist based in Chicago, who graduated from The School of The Art Institute in 2020. Recent solo shows of their work include Puto el Último at Mindy Solomon Gallery, Miami; Ni de aqui, ni de allá at Hair + Nails, Minneapolis; and Brillo Putx at Happy Gallery, Chicago. Group shows include Forgive me not, Forgive me not at Roots & Culture, Chicago. Recalantada at Chicago Art Department, Chicago; Salon ACME no. 8 at ACME, Ciudad de Mexico; and Future Future at Hair + Nails, Minneapolis. Their fellowships include Artaxis, Luminarts and NCECA, and they have been resident at the Hyde Park Art Center, Chicago.

Stellarhighway is a space for viewing objects by a wide range of makers located in Brooklyn, NY.
We are open by appointment only, Thursday through Sunday afternoons. For more information about this presentation or to make an appointment, please contact clay@stellarhighway.com.