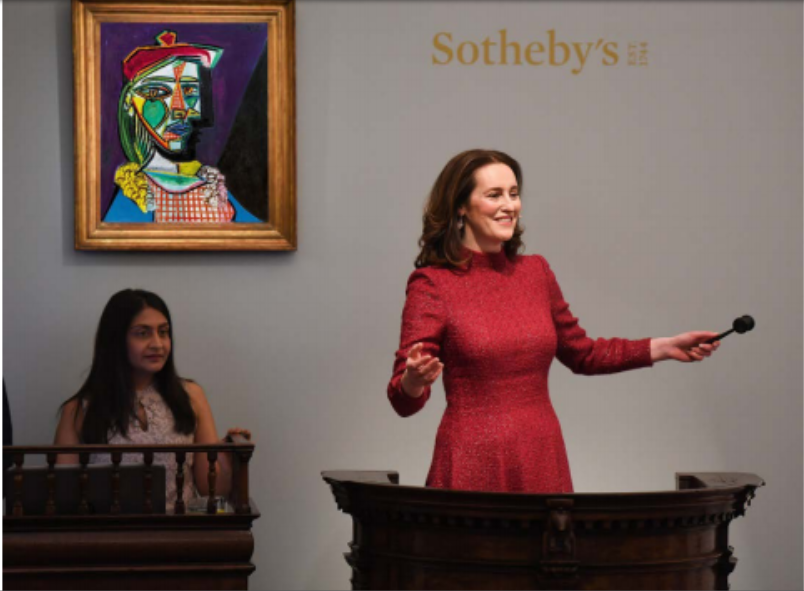 Highest Price for Any Painting Ever Sold at Auction in Europe

Helena Newman, Global Co-Head of Sotheby’s Impressionist & Modern Art Department & Chairman of Sotheby’s Europe, said: “Having been part of the incredible moment when Alberto Giacometti’s Walking Man achieved its unprecedented price for any sculpture, it was a particular thrill to see Picasso’s portrait of his golden muse Marie-Therésè Walter achieve a new benchmark tonight in the same saleroom for any painting auctioned in Europe. The success tonight of works including Umberto Boccioni’s spectacular Futurist composition showed that our collectors are hungry for the rarest, highest-quality examples we are able to unearth. The two works by Salvador Dalí that led our offering of Surrealist art demonstrates so well the truly global nature of our present market: sourced from Argentina, sold in our London salesroom, and purchased by an Asian collector.”

The night was led by Pablo Picasso’s Femme au béret et à la robe quadrillée (Marie-Thérèse Walter), which was competed for by three bidders to sell for £49.8m / $69.2m / €56.7m – the second highest price for any work ever sold at auction in Europe in GBP. Painted just months after Guernica and his Weeping Women, this appeared at auction for the first time, having remained in the same distinguished private collection since it left the artist’s estate.

The sale offered three further examples of the artist’s diverse styles, demonstrating virtuosity of a master like Picasso in a single sale. Le Matador (1970), last exhibited in the legendary Palais des Papes show in the year of the artist’s death, sold for £16.5m/ $22.9m (est. £14-18m). Together with Tête de femme (1963), a quietly powerful portrait of his last love Jacqueline Roque, and Deux femmes assises (1908), a gouache inspired by tribal art, the total achieved for works by Picasso over the course of the evening was £73.8m/$102.4m (est. £57-63.5m).

Testa + luce + ambiente (1912) by the trailblazer of Futurism Umberto Boccioni was hotly contested by 4 bidders to sell for £9.7m / $13.6m (est. £5.5-7.5m) – quadrupling the previous auction record for the artist. An extremely rare appearance on the market, this is the first Futurist oil by the artist sold at auction in almost three decades. A further auction record was achieved as Lynn Chadwick’s majestic and dynamic Pair of Walking Figures – Jubilee (1977) soared to above-estimate £2.5m/$3.5m (est. £600,000-800,000), with five bidders.

A further highlight was André Derain’s exquisite sun-drenched Bateaux à Collioure (1905) – one of the artist’s most accomplished Fauve landscapes – which was competed for by four bidders to sell for £10.9m / $15.1m (est. £7.5-10m).

The Surrealist portion of the sales was highlighted by rediscovered works by Salvador Dalí, which had remained in the collection of his friend the Argentinian Condesa Cuevas de Vera since they were acquired directly in the 1930s. The group was led by Maison pour érotomane (circa 1932) at £3.5m/$4.9m (est. £1.2-1.8m), which sparked a 5-way bidding battle. The jewel-like composition brings together the artist’s fixation with his native Catalan landscape and the erotically charged experiences with his wife Gala. Gradiva (1931) – depicting the mythological figure central to Surrealist thought – sold for £2.7m/$3.7m. Together with the ink and pencil study for Gradiva, the three works doubled their combined high-estimates to bring £6.3m / $8.8m (est. £2.5-3.7m) – with Asian collectors competing for all three.