Sotheby’s to Offer Saint Margaret by Titian and Workshop 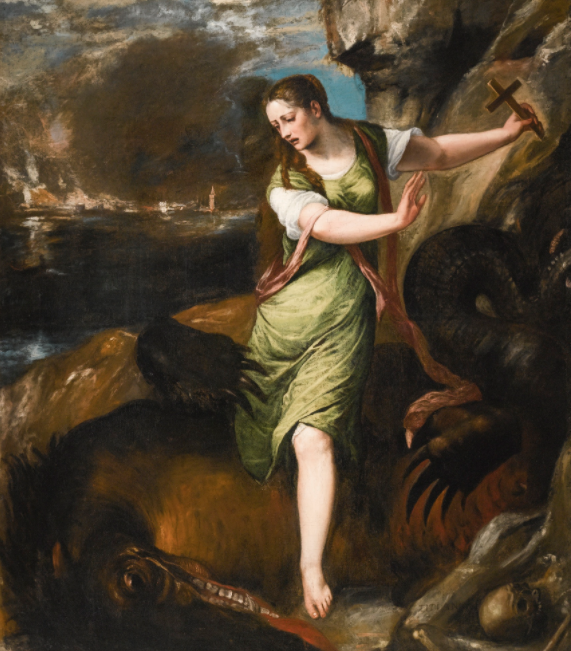 NEW YORK, 5 January 2018 – Sotheby’s New York Evening auction of Master Paintings on 1 February 2018 will offer a monumental and striking painting by Titian and his workshop. One of only two known versions of the subject by the artist, Saint Margaret (estimate $2/3 million) was first recorded in the English royal collection of King Charles I (1600– 1649), where it was displayed alongside the King's most highly prized works at Whitehall Palace. The present work is being offered at a particularly poignant time, as the Royal Academy of Art’s upcoming exhibition Charles I: King and Collector (27 January – 15 April 2018) seeks to reunite the King’s treasures that were dispersed following his execution.

The painting will be on public view in our New York galleries beginning 26 January, during Sotheby’s annual Masters Week exhibitions.

During his reign, Charles I competed ferociously with the great powers of Europe to assemble an art collection rivaling to all others. Born into a family with deep ties to art, Charles I had an immense appreciation of art history and traveled across Europe to acquire works by some of the greatest artists, including Leonardo Da Vinci, Raphael and Correggio.

It was in the Privy Lodging Rooms at Whitehall Palace – a series of private apartments – where Charles kept his most highly-prized paintings. According to inventory records and notes from 1639, Saint Margaret is listed as hanging in the First Privy Lodging Room, an apartment so distinguished that no other could rival in splendor, where it was displayed alongside the King's collections of Titians, including the early Jacopo Pesaro Presented to Saint Peter (Koninklijk Museum voor Schone Kunsten, Antwerp), Venus with an Organ Player and Alonso de Avalos addressing his Troops (both Prado, Madrid), and three other remarkable works currently hanging at the Musée du Louvre, Paris.

Soon after the King's execution in 1649, the decision was taken by Parliament to sell off his grand collection. Much of the collection was sold quickly to raise funds for the state, while others were sold to pay off the King’s debt.

Alexander Bell, Worldwide Co-Chairman of Sotheby’s Old Master Paintings Department, commented: “The inventories and valuations of Charles I’s collection compiled mainly in 1649 are unique documents that provide fascinating insights into the relative value of the works at this particular moment in time. The inventories record Saint Margaret at £100 – a little less than the more celebrated paintings by Titian, such as Venus with an Organist (Prado, Madrid) at £150 and the Allegory of Alfonso d’Avalos (Louvre, Paris) at £250, but more than the vast majority of works in the 3 enormous and storied collection, including the now-world-famous Salvator Mundi by Leonardo Da Vinci at £30. The most renowned pictures in the King’s collection were valued considerably higher: Raphael’s Madonna della Perla (Prado, Madrid) was recorded at £2,000, and Correggio’s Jupiter and Antiope (Louvre, Paris) at £1,000.”

As one of two versions of the subject of Saint Margaret signed by Titian – the other being in the Museo del Prado, Madrid – it seems probable that the works were painted alongside one another, with Titian utilizing his workshop to block in areas of the painting and finishing the key areas himself. The expressive power of Titian’s later style is nowhere more clearly demonstrated than in the atmospheric depiction of the city of Venice on fire in the background. On the skyline, the campanile of St Mark glows in fiery orange and pinks, whilst the stormy waves of the sea are animated by dark blue and green brushstrokes.

As is characteristic with Titian’s late works, the darker tones, fiery landscape and swift handling of the paint in the present work create a sense of drama that is entirely fitting to the narrative. Titian depicts the legendary virgin martyr, Saint Margaret, as she emerges unscathed from the body of Satan, who had appeared to her in the form of a dragon and swallowed her whole. The cross she held in her hand irritated the monster’s insides and the dragon burst open allowing her to escape unharmed. Painted in a myriad of colors, her luminous light green tunic with its bright white sleeves and rose pink veil stand out from the earthier, brown based tones of the rest of the canvas. The dragon that occupies the bottom register of the canvas is predominantly painted in brown and blackish hues and the only flashes of color are the strokes of red and white delineating his vicious mouth. Depicted in dramatic contrapposto, the implied movement in Saint Margaret’s twisting body contrasts to the solidarity of the rock behind her, emerging from the picture plane as an impressive figure, trampling the dragon underfoot and holding her crucifix aloft.

Photojournalist Prashant Panjiar’s Must-Read Art Book
In his latest book, That Which is Unseen, Panjiar takes us across almost four decades of Indian history and proves to be one of the most fascinating figures in contemporary photojournalism.

Beyond Nasca Lines: The Compelling Mystery of Nasca Pottery
Archeologist gives inside look at their research process & unpacks…