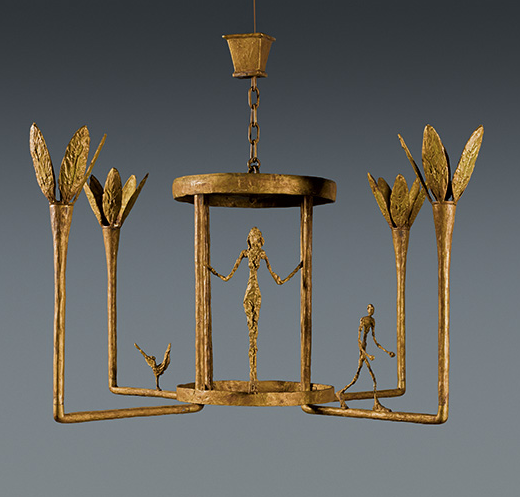 Alberto Giacometti, Lustre avec femme, homme et oiseau, conceived circa 1949 and cast in bronze in 1952 in an edition of 3

The Artist’s Most Celebrated Figures The Walking Man & The Standing Woman United In One Artwork, Isolated for Eternity

Thomas Bompard, Head of Sotheby’s London Impressionist & Modern Art Evening Sales, said: “This beautiful chandelier by Alberto Giacometti is the tangible coming together of visual arts, decoration and theatre. Despite a natural tendency for introversion, Giacometti became a figurehead of existentialism – finding his place at the centre of the avant-garde scene of artists and intellectuals in Paris. He was sought after by patrons, dealers and fellow artists, collaborating with the likes of modernist playwright Samuel Beckett to capture the fragile but powerful beauty of what hadn’t been destroyed by the Second World War. This is much more than a chandelier: it is a beacon of universal symbolism, of hope and humanism.”

Sotheby’s London, 29 January 2018 – A dramatic yet elegant chandelier, Lustre avec femme, homme et oiseau is one of only three casts by Alberto Giacometti for select patrons – a unique instance where all of the key motifs of the artist’s career appear in a single work. Hailing from a pivotal moment in the artist’s oeuvre, the piece encapsulates the existential anxiety of the postwar period whilst casting magical shadows that animate Giacometti’s heightened reality.

Appearing at auction for the first time, Lustre avec femme, homme et oiseau will go under the spotlight as part of Sotheby’s London Impressionist & Modern Art Evening Sale on 28 February, with an estimate of £6,000,000-8,000,000.

Using the device of a chandelier, Giacometti creates a highly theatrical setting on which the protagonists play out an unknowable and unresolved drama. In the years after the Second World War, his figures were reduced to their bare essential form, displaying an austerity that embodied the artist’s existentialist concerns, and reflecting the lonely and vulnerable human condition. Here, individual figures are neither alone nor placed together. Giacometti was fascinated by spatial relationships and the concept of movement within a single work, and the cage-chandelier allowed him to bring together two of the most common spatial arrangements of the post-war period – cages and the city square. This results in interweaving themes of isolation, incommunicability and the strangeness of relationships between men and women.

Giacometti only produced such objects for friends, and the plaster model for Lustre avec femme, homme et oiseau was originally commissioned around 1949 by Louis Broder, a Swiss publisher based in Paris who specialised in producing printed editions of works by artists including Joan Miró and Pablo Picasso. Several years later Giacometti agreed to cast three bronzes from the plaster, of which the other two were acquired by the artist’s dealer Aimé Maeght and dealer Heinz Berggruen – who donated the plaster original to the Centre Georges Pompidou in 1983.

The interest in the artist continues to rise, with recent retrospectives at the National Portrait Gallery and Tate Modern in London, and this rare piece sheds light on a little known aspect of his work.