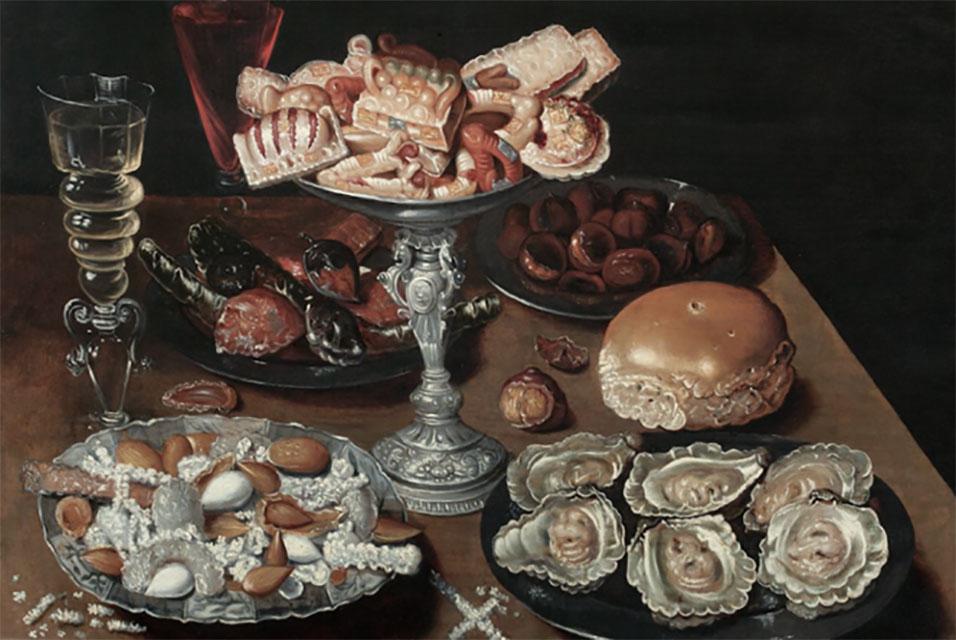 Notre Dame, IN: The Snite Museum of Art at the University of Notre Dame has added an important Dutch still life by a follower of Osias Beert I to its collection of seventeenth-century European art.

"It is a great pleasure to welcome this fine painting into the permanent collection as it fills an important cultural and art historical opportunity we have long researched," said Director Joseph Antenucci Becherer. "In addition to playing a prominent role among our collection of European paintings, it makes dynamic connections to our renowned decorative arts holdings," he noted.

The Snite Museum's painting reprises a portion of a work jointly executed by Osias Beert I and Frans Francken I entitled Still Life with the Rich Man and Poor Lazarus, which depicts a parable about greed and charity. Themes and variations of this kind were typical of artistic practice at the time. Almonds, Oysters, Sweets, Chestnuts and Wine on a Wooden Table is particularly interesting for the decorative art objects and foodstuffs that it features, as well as for the artist's removal of figures that would have identified it as a work with a religious subject. Instead, the artist focuses not on the morality lesson found in the Beert and Francken painting, but on luxury. Gone from the upper right corner of this work is the scene of a rich man dining with a group of elegantly dressed men as a starving Lazarus, in rags, begs on the ground beneath them that was in the model. 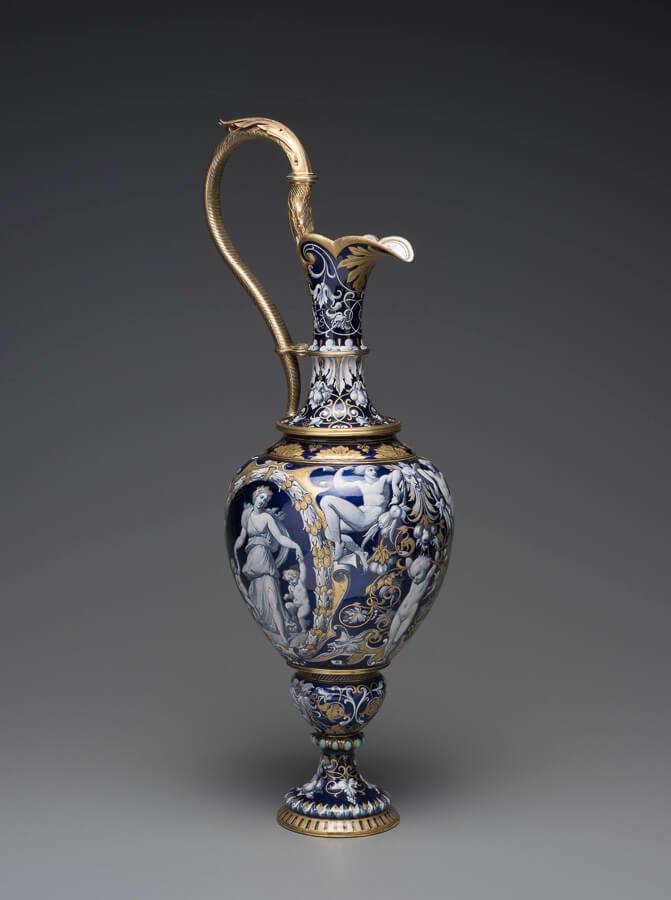 Another recent acquisition for the Snite, a Sèvres Enamel Ewer, 1849.

By the second quarter of the 1600s, such explicit moral lessons fell out of favor, and still lifes incorporating lavish spreads alone were intended to signal the parable. The Snite's painting is an excellent example of the genre, beautiful on its own but also charged with rich symbolism.

In the lower-left, a pewter serving dish is filled with peeled and candied almonds and candied cinnamon sticks, called kapittelstokjes, after the bookmark used by Dutch ministers to keep their place in Bibles. In the center foreground, a comfit in the shape of a cross reminds viewers of salvation. Oysters, considered a delicacy, are plated to the right, and, at the upper left, two glasses in the Venetian fashion are filled with wine. A centrally placed silver dish, decorated with seahorses in an allusion to sea trade, holds almond paste tartlets and biscotti. In the background on the right, a pewter plate contains chestnuts, in season in the autumn and used in stews or sautéed in butter and sprinkled with sugar and cinnamon. The large white bun filled with cream at center right was another luxury item relative to the standard fair of whole wheat or rye buns. With its Venetian glass, seahorse motifs, and foodstuffs baked with the liberal use of sugar—a commodity imported from plantations in the Caribbean and Brazil—the painting offers a visual narrative of international commerce and the slave trade needed to sustain it.

"This still life painting with its dazzling array of treats is a welcome addition to our collection of seventeenth-century paintings. It was supposed to remind viewers about the sin of gluttony, the need for charity to those who have less, and the transience of life,” said Cheryl Snay, Curator of European and American Art before 1900. “Instead, it became an essay on conspicuous consumption. With its display of sugar-coated spices and almonds, it affords us an opportunity to discuss its appeal to the morality of its original audience in addition to the sugar trade that fueled slavery," Snay continued.