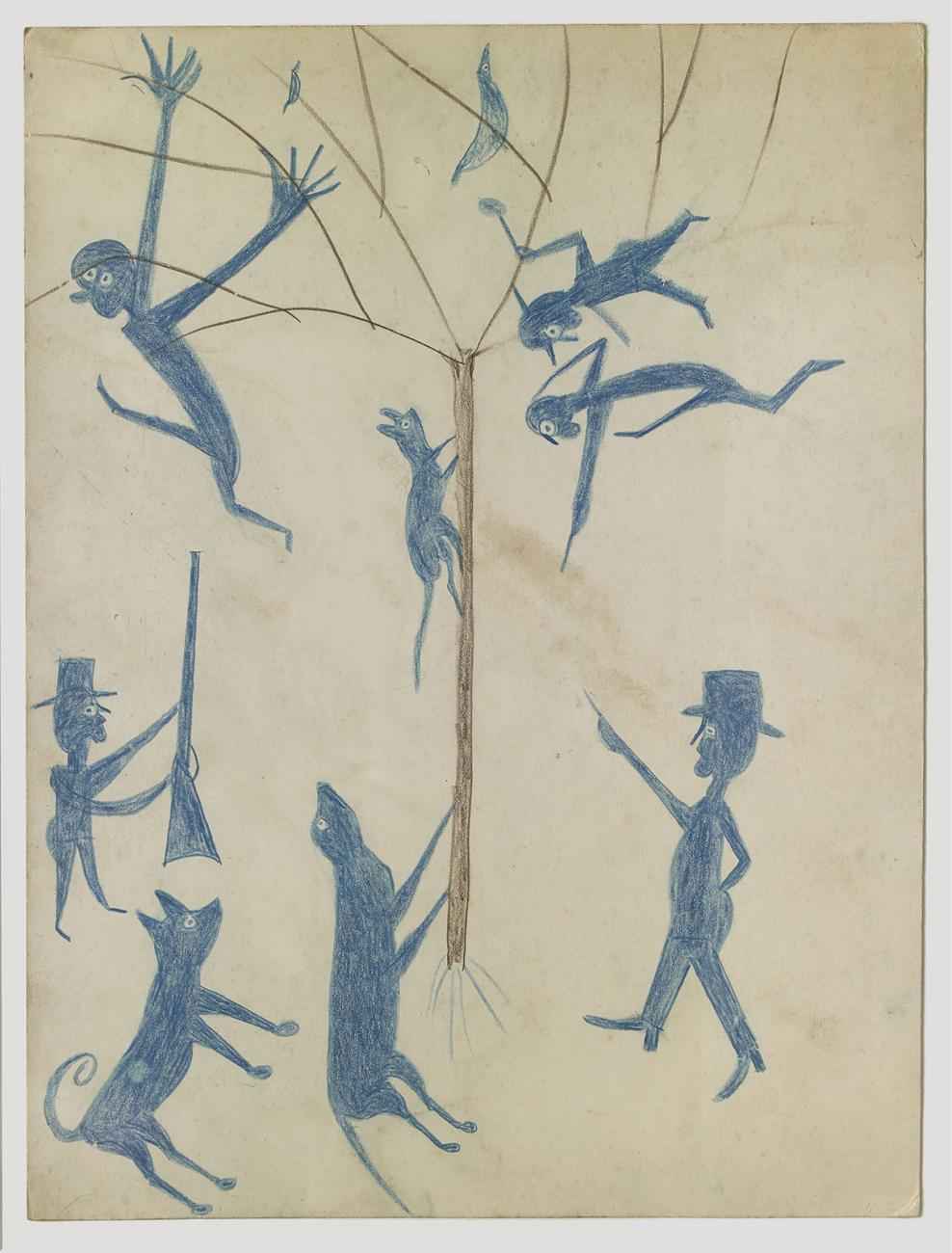 Bill Traylor (ca. 1853–1949) is among the most important American artists of the 20th century. Born in antebellum Alabama, Traylor was an eyewitness to history—the Civil War, Emancipation, Reconstruction, Jim Crow segregation, the Great Migration and the steady rise of African American urban culture in the South. In the late 1930s, a decade after leaving plantation life and moving to the city of Montgomery, Alabama, Traylor took up pencil and paintbrush and created a visual autobiography, images on discarded cardboard extracted from his memories and experiences. When he died in 1949, Traylor left behind more than 1,000 works of art, the only known person born enslaved, and entirely self-taught, to create an extensive body of graphic artworks. 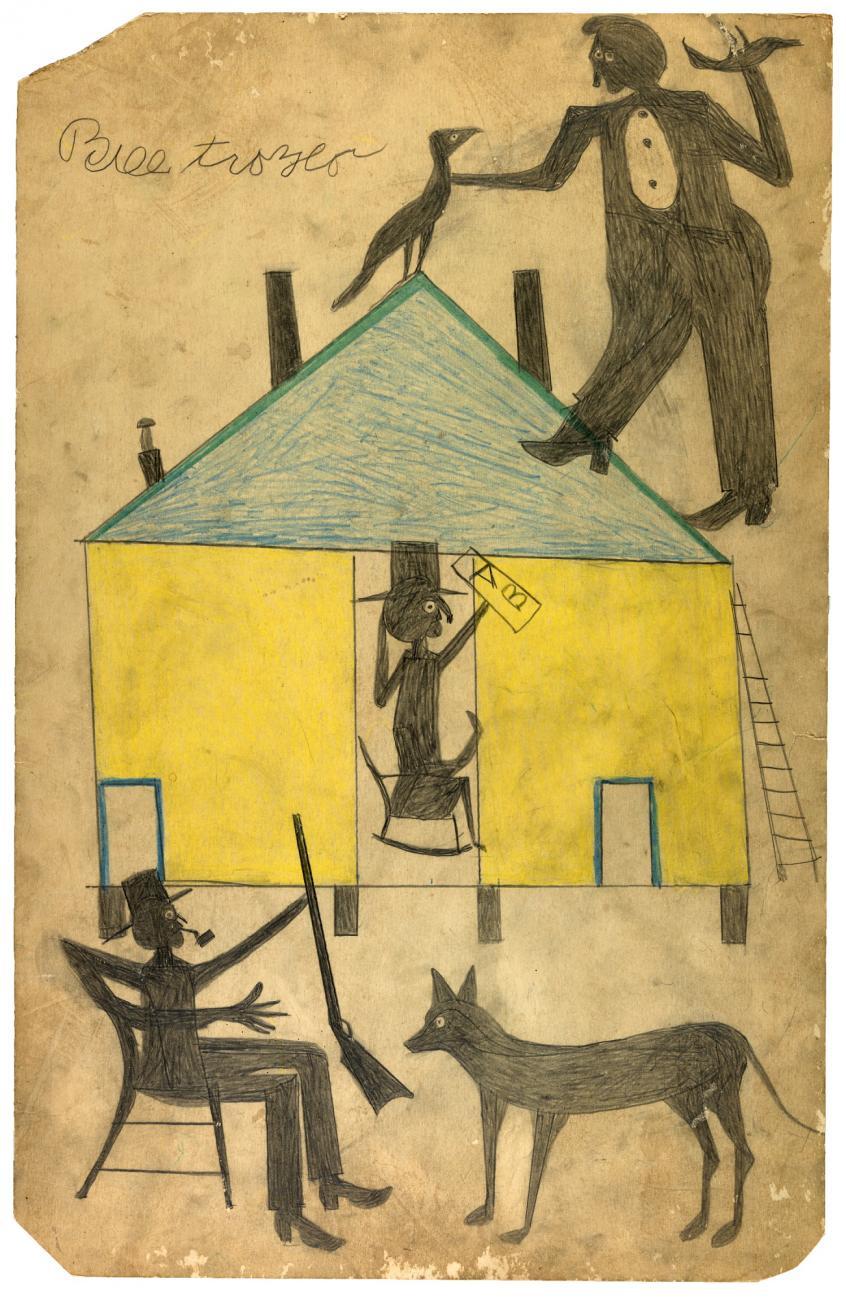 “Between Worlds: The Art of Bill Traylor” brings together 155 drawings and paintings to provide the most encompassing and in-depth study of the artist to date. This major retrospective is drawn from public and private collections across the United States and abroad, and includes 17 works from the Smithsonian American Art Museum. It presents a comprehensive picture of Traylor’s stylistic development and artistic themes, explored in the context of the profoundly different worlds Traylor’s life bridged: rural and urban, black and white, old and new.

“Between Worlds: The Art of Bill Traylor” is on view at the museum from Sept. 28 through March 17, 2019. Organized by Leslie Umberger, curator of folk and self-taught art at the Smithsonian American Art Museum, the exhibition is accompanied by a groundbreaking monograph in which Umberger thoroughly reassesses the known facts of Traylor’s life and family, his creative trajectory, and the art world’s discovery of him and positions him within the broader context of American art. The museum is the sole venue for this exhibition.

“Since 1970 when the Smithsonian American Art Museum began collecting folk and self-taught artists with purpose, this museum has blazed a trail in widening and deepening the story of American art and artists,” said Stephanie Stebich, The Margaret and Terry Stent Director at the Smithsonian American Art Museum. “Leslie Umberger’s thoughtful and encompassing presentation of Traylor’s work makes ‘Between Worlds’ a landmark project. The book and exhibition exponentially expand not just the story of one self-taught artist, but also the overarching stories of American and African American art in the 20th century.” 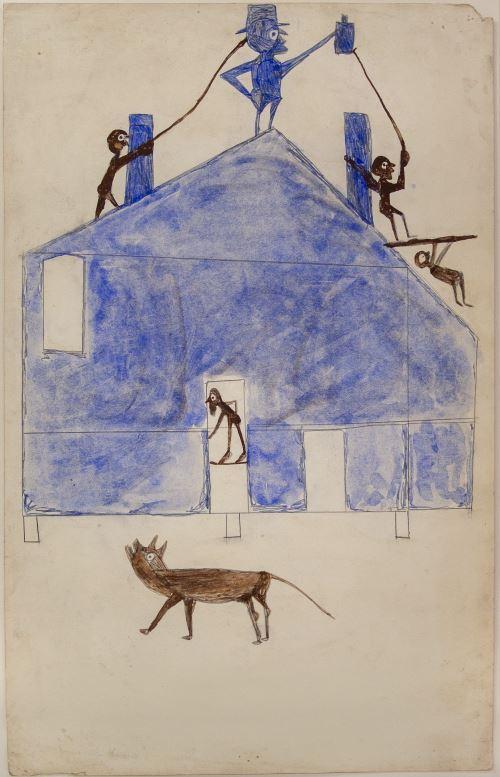 “Bill Traylor came to art making on his own and found his creative voice without guidance,” said Umberger. “Traylor was denied literacy, yet his visual depictions comprise an oral history recorded in a pictorial language.”

A native of rural Alabama, Traylor came of age during Reconstruction and lived most of his life in the brutal era of Jim Crow segregation. In the late 1920s, Traylor left plantation life and moved to the urban landscape of Montgomery. When Traylor began drawing, he had little to his name and was living predominantly on the streets in the black business district. Montgomery in the 1930s and 1940s, though segregated, offered Traylor just enough space to become an artist of powerful vision and ability. Traylor’s drawings and paintings look back at a hard rural past and forward at a rising African American culture. Traylor’s visual depictions are unique, yet they echo the beliefs and stories that had been part of African American history from slavery through many subsequent decades.

The exhibition’s presentation features several interpretive elements for visitors, including a short introductory video, a timeline, audio commentaries for selected artworks and a playlist of songs from the early 20th century that are evocative of the time in which Traylor lived. Bill Traylor: Between Worlds, by Jeffrey Wolf and Breakaway Films, introduces Traylor through the perspectives of Umberger and Richard Powell, the John Spencer Bassett Professor of Art and Art History at Duke University. The timeline weaves together what is known of Traylor’s personal biography with historical events that shaped the country and transformed Traylor’s world in the heart of the South. Audio stops for 16 artworks include a variety of voices, including Traylor’s great-grandson Frank L. Harrison Jr.; renowned folklorist Bill Ferris; and jazz musician Jason Moran. The playlist, created in collaboration with colleagues at the Smithsonian Center for Folklife and Cultural Heritage, is available online through Smithsonian Folkways Recordings and features songs from Lead Belly, Josh White, Big Mama Thornton, Johnie Lewis and others.

BOOK
The exhibition is accompanied by a monograph written by Umberger with an introduction by acclaimed artist Kerry James Marshall, published by the Smithsonian American Art Museum in association with Princeton University Press. The 444-page publication features 205 of Traylor’s artworks along with 83 supplemental illustrations, city maps of Montgomery, family trees, a timeline of key events from Traylor’s life and an extensive bibliography. In Umberger’s carefully researched chapters, she provides the most comprehensive and in-depth study of the artist to date, examining Traylor’s life, art, and powerful drive to bear witness through the means available to him, pictures. Umberger drew on a wealth of historical documents—including federal, state, and county census records, birth and death certificates, and slave schedules—plus interviews with family members and Montgomery locals to clarify the record of Traylor’s personal history and family life. The story of his art opens in the late 1930s, when Traylor first received attention for his pencil drawings on found board, and it concludes with the posthumous success of his oeuvre.

The book is available for purchase in the museum store and in the online bookstore ($60, hardcover).

PUBLIC PROGRAMS
In conjunction with the opening of the exhibition, the museum will premiere Bill Traylor: Chasing Ghosts (2018), a feature-length film by Jeffrey Wolf and Breakaway Films, with a public screening Sunday, Sept. 30, at 3 p.m. followed by a Q&A with the filmmaker and Umberger; the film will be shown again Saturday, March 2, 2019, at 3 p.m.

The museum’s recurring program “Double Take: One Artwork, Two Viewpoints” Tuesday, Nov. 6, at 6 p.m. will feature a conversation between Umberger and Diana Baird N’Diaye, folklorist and curator at the Smithsonian Center for Folklife and Cultural Heritage, about the significance that clothing and personal adornment play in Traylor’s work and in African American history and culture. On Friday, Feb. 22, 2019, the museum will present the first in the Margaret Z. Robson symposium series with a host of invited scholars exploring themes related to the exhibition. Details will be available online later this year.

SELF-TAUGHT ART AT THE SMITHSONIAN AMERICAN ART MUSEUM
The Smithsonian American Art Museum was among the first major museums to collect works by folk and self-taught artists and to advocate for a more inclusive collection that aims to tell an ever-expanding story of America through the art of its people. The museum began broadening traditional ideas of American art in 1970, when it acquired James Hampton’s “Throne of the Third Heaven of the Nations’ Millennium General Assembly” (ca. 1950–64). Since then, the museum has been recognized internationally as a leader in championing the importance of works by untrained artists. The collection has grown with major donations from Herbert Waide Hemphill Jr., Chuck and Jan Rosenak, David L. Davies, the Kallir Family and Douglas O. Robson. Today the collections at the museum, which include thousands of works by self-taught artists and the largest holdings of African American and Latino art of any nationally focused institution, reflect the collective identity of America.

Recent exhibitions featuring the work of untrained artists have included “Mingering Mike’s Supersonic Greatest Hits” (2015), “Untitled: The Art of James Castle” (2014) and “Ralph Fasanella: Lest We Forget” (2014). The museum has had dedicated gallery spaces for folk and self-taught art for more than 45 years. A new installation of these recently renovated galleries opened to the public in 2016.