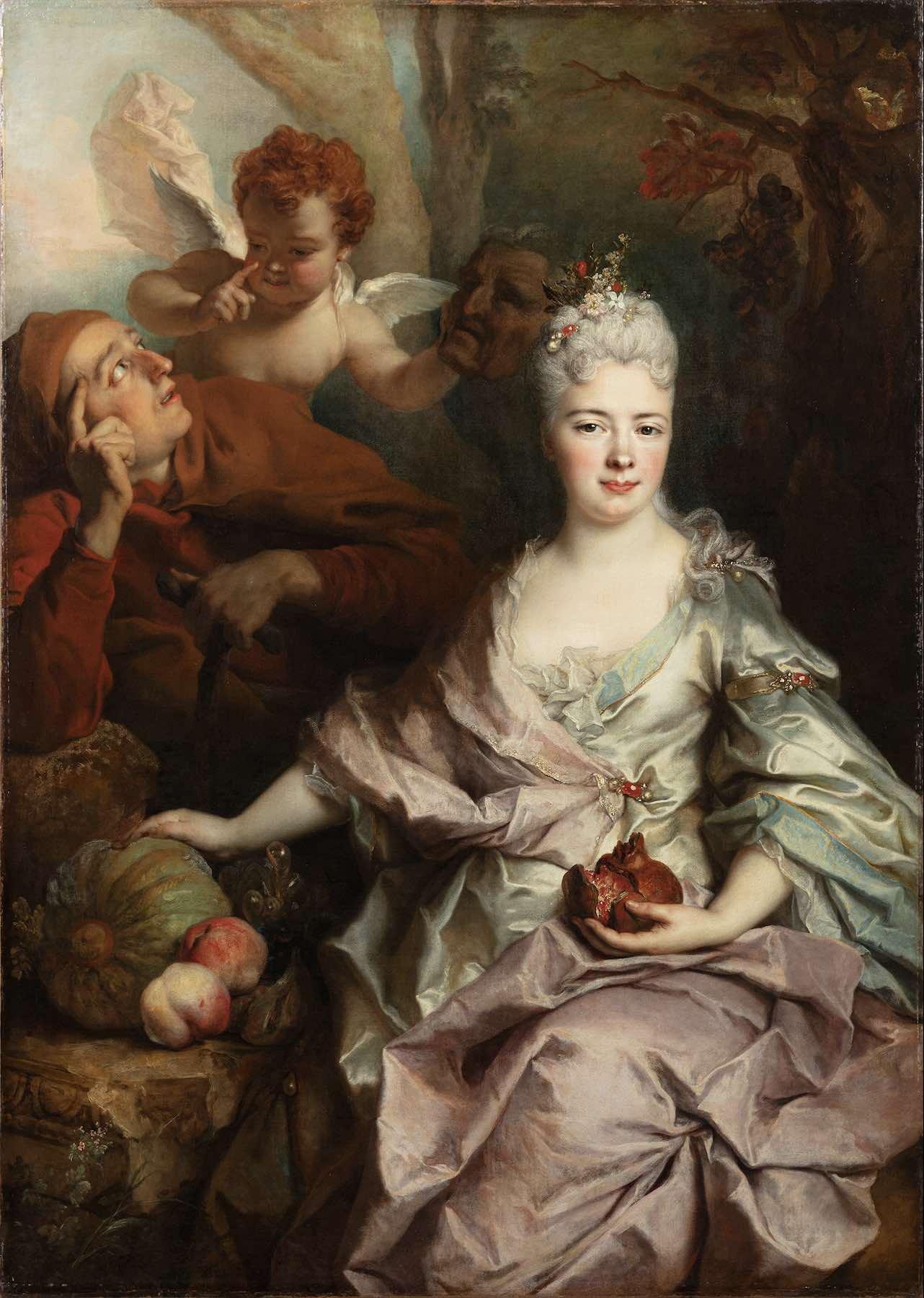 NEW YORK—Following the restitution in early 2021 of Nicolas de Largillière’s 18th century masterwork Madame de Parabère (Portrait présumé, or Vertumne et Pomone) or Portrait of a Lady as Pomona by the Dresden State Art Collections to the heirs of the renowned Jewish collector Jules Strauss, Sotheby’s will offer the painting as a highlight of the upcoming Master Paintings & Sculpture Auction on 27 January in New York, and will mark one of the most significant works by the artist ever offered at auction (estimate $1/1.5 million).

Nicolas de Largillière was one of the most important and sought-after portraitists in Paris during the Regency period and beyond, and the present portrait is a tour-de-force that exhibits the artist’s unmatched ability to capture prominent 2 members of Parisian society with elegance and beauty within a complex and creative allegorical composition that reflects both his French and Flemish stylistic influences.

The painting was purchased by the revered collector and banker Jules Strauss (1861-1943), who was born in Frankfurt and spent his entire adult life in France. By 1884, following his arrival in Paris in 1880, Strauss was already collecting Dutch and Flemish Masters and particularly eighteenth-century French painting. He had a particular passion for Watteau and owned several paintings by the master. His passion extended to antiquities, old master drawings, furniture, sculpture, tapestries, porcelain, books and nineteenth-century painting. By the early 1890s, he had already begun to collect the Impressionists and owned more than 150 paintings in his lifetime, including fine paintings by Manet, Cézanne, Degas, Monet, Renoir, Sisley and Gauguin. In a lifetime of passionate collecting, Jules Strauss put together one of the very first remarkable collections that encompassed the finest examples of the arts from antiquity to the Impressionists. Part of the collection was stolen or forcibly sold by the Nazis during World War II. Portrait of a Lady as Pomona by Largillière was purchased in 1941 for the German Reichsbank Berlin through Margot Jansson and transferred to the German Democratic Republic’s Ministry of Finance, then subsequently to the National Gallery in Berlin in 1953, and finally to the Staatliche Kunststammlungen, Dresden in 1959. During the Nazi occupation of France, Strauss remained in Paris with his wife Marie-Louise, and they were looted and forced to sell works of art from their collection, including the present Largillière.

In 2021, the museum restituted the painting to the heirs of Jules Strauss, with the help of the French Embassy in Berlin and the French Commission for the Compensation of Victims of Spoliation.

George Wachter, Sotheby’s Chairman and Co-Worldwide Head of Old Master Paintings, commented: “Nicolas de Largillière is among the most revered artists of late 17th and 18th century France, whose portraiture is held in the permanent collections of many of the most renowned institutions around the world. Portrait of a Lady as Pomona is among the artist’s most pristine and beautiful paintings, and rarely do works of this quality by Largillière appear at auction. We are also extremely proud to be offering this work following its recent restitution to the Strauss heirs, as it is critically important to continually reclaim the history of the many collectors, including Jewish collectors, who were forced to either sell their collections or had them forcibly removed from their possession.”

Andrew Strauss and Pauline Baer de Perignon, heirs of Jules Strauss, said: “Following many years of meticulous research, our family is very pleased to retrieve our great-grandparents’ painting by Largillière, which in turn contributes to the legacy of Jules Strauss, the collector. We dedicate the return of the Largillière to the memory of Jules and Marie-Louise Strauss and to all those subjected to persecution.”

Dating from 1710-1714 when Largillière was at the height of his powers and popularity, Portrait of Madame de Parabère or Portrait of a Lady as Pomona (estimate $1/1.5 million) is one of the most significant and important works by the artist ever offered at auction, and is comparable to other masterpieces by the artist completed around the same time, including the Portrait of the Comtesse de Montsereau as Diana, which was formerly in the collection of the New-York Historical Society. The sitter of Portrait of a Lady as Pomona has traditionally been identified as Marie Madeleine de La Vieuville, the marquise de Parabère (1693-1755), who was the mistress of Philippe II, Duc d'Orléans while he was regent of France during the childhood reign of King Louis XV of France.

As the Director of the Académie Royale, Largillière preferred to work with private patrons, rather than on official court portraiture, and thus quickly established his reputation as the preeminent portraitist to the wealthy Parisian aristocracy. As such, Largillière often portrayed his clients as allegorical figures, and developed a repertory from which his patrons could select their guise. In Portrait of a Lady as Pomona, the sitter is portrayed as Pomona, the goddess of fruit and abundance in Roman mythology who was famed for her skills in garden cultivation, and was often depicted amongst fruit and fruit trees or within gardens or orchards. In Ovid's Metamorphoses, the beautiful and sought-after Pomona shuns amorous love and remains in her enclosed orchard, rejecting the advances of satyrs, Pan, Silvanus, and Priapus. However, the god of the seasons Vertumnus tricks the goddess by wearing the disguise of an old woman looking to pick apples in order to enter her orchard. After telling her tales of the danger of rejecting a suitor, Vertumnus eventually reveals himself and successfully woos the goddess.

In the present portrait, Largillière includes Vertumnus just behind Pomona's right shoulder, looking up at Cupid, who has removed Vertumnus's mask and looks down, holding his finger to his mouth as if assuring him that he won't reveal his secret. Pomona remains powerful and confident, looking directly at the viewer, unaware of or disinterested in what is going on behind her. Largillière painted his sitter holding a ripe pomegranate on her lap, torn open in a suggestive and seductive manner, while resting her right hand on a larger pumpkin on a table beside her with two apples, and autumnal trees and grapes in the background.