SAN FRANCISCO — The Fine Arts Museums of San Francisco (FAMSF) are pleased to announce the acquisition and exhibition of the powerful video work in Pursuit of Venus [infected] (2015), by New Zealand artist Lisa Reihana, as part of the Contemporary Art Program at the de Young museum. Panoramic in format, the animated, digital scroll is a moving image interpretation of the 19th-century French scenic wallpaper Les Sauvages de la Mer Pacifique (Native Peoples of the South Pacific) and its romanticized depiction of European explorations in Polynesia.

“The Fine Arts Museums of San Francisco are committed to questioning dominant narratives and integrating new, diverse points of view throughout our exhibition program. Lisa Reihana is a powerful voice in redefining the history as we know it,” states Thomas P. Campbell, Director and CEO of the Fine Arts Museums of San Francisco. ”Following on the acquisition of work by The Propeller Group and Carrie Mae Weems, the acquisition and exhibition of in Pursuit of Venus [infected] reaffirms the institution’s commitment to pioneering media art, inviting audiences to reconsider the cultural context of our society.” 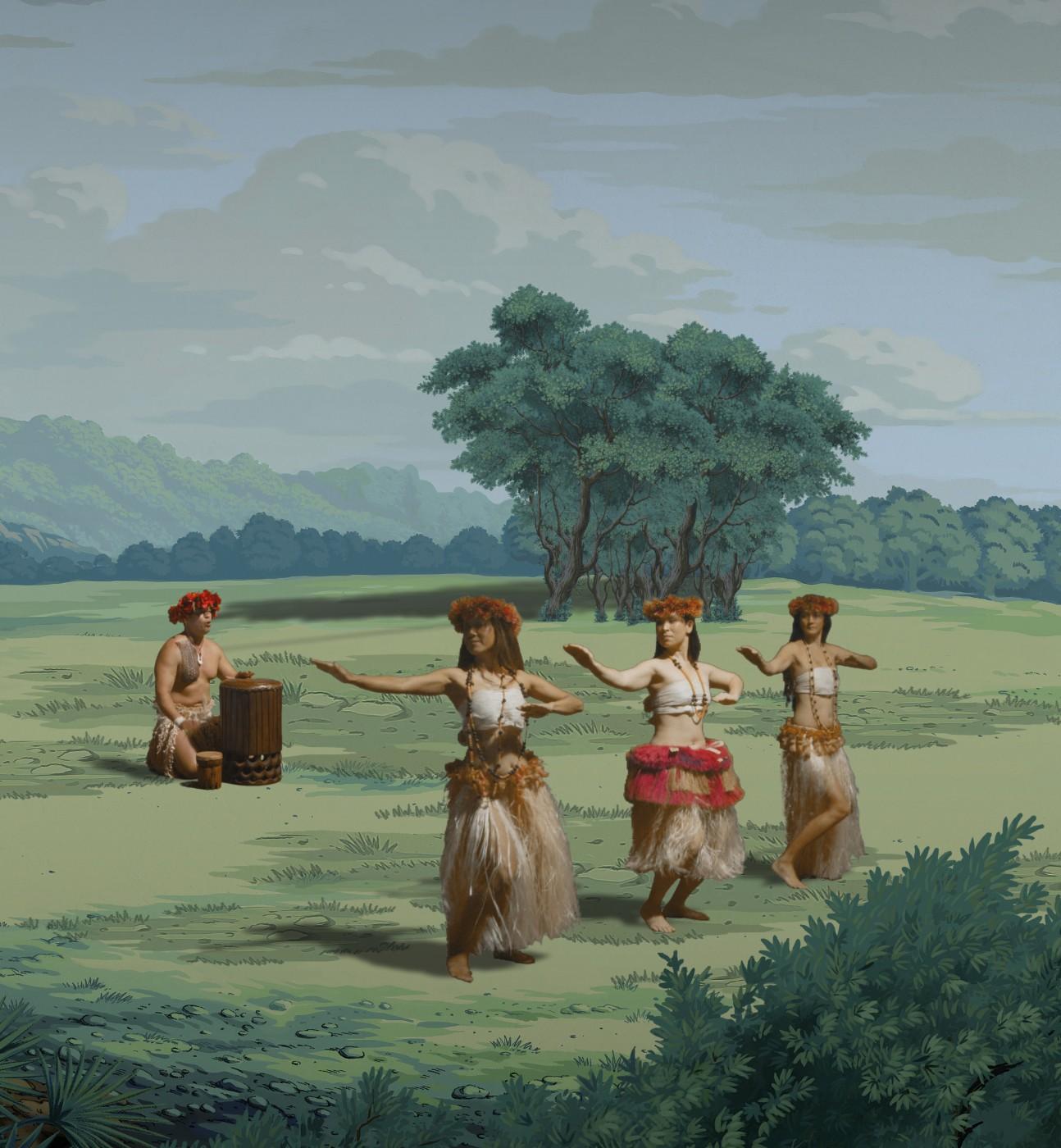 In its first exhibition in the continental United States, in Pursuit of Venus [infected] takes possession of the entire upstairs special-exhibition space at the de Young. The presentation at the de Young will include Les Sauvages de la Mer Pacifique wallpaper and an 18th-century folio with engravings of scenes from captain James Cook’s travels in the Pacific Ocean—both also from the Museums’ holdings.

“I am immensely proud that in Pursuit of Venus [infected] has been acquired and is shared by two esteemed institutions. I greatly admire the de Young and Los Angeles County Museum of Art, both of whom continue to hold and build relationships to the Pacific. It’s wonderful knowing this work has two new homes where it will be exposed to new audiences. Inspired by the French scenic wallpaperLes Sauvages de la Mer Pacifique, this immersive video provides a contemporary reappraisal for the people and places from which it originally came.

“I’d like to take this opportunity to acknowledge the many people of all nations who supported the making of this work. The famous Māori proverb explains that we all have something to share, and our collective knowledge helps us all,” notes Reihana.

An encounter with woodblock designs for the 1804 wallpaper Les Sauvages de la Mer Pacifique by Joseph Dufour led Reihana to create in Pursuit of Venus [infected], a response to the widespread fascination with the Pacific voyages undertaken by Captain Cook, de Bougainville, and La Pérouse.

“Challenging the Dufour wallpaper’s imperialist conception of the encounter between Captain Cook’s envoy and the Pacific Islanders, in Pursuit of Venus [infected] reclaims history to present the story from the perspective of the Pacific cultures,” says Claudia Schmuckli, Curator in Charge, Contemporary Art and Programming at the Fine Arts Museums of San Francisco. “Using Tā-Vā, a cyclical concept of time and space, Lisa Reihana offers a nuanced and revisionist understanding of the complexity of cultural identity shaped by colonialism.”

The result is an 70–foot-wide, 13–foot-tall moving-image interpretation of Les Sauvages de la Mer Pacifique. The hourlong video gently moves through 80 live-action vignettes projected onto a utopian Tahitian landscape. Western and indigenous actors are cast as the historical figures in historic and imagined scenes, moving toward the violent and dramatic climax of the death of Captain Cook in Hawai‘i in 1779. The accompanying evocative soundscape includes dialogue in several Pacific languages. Cultural celebrations and traditions, such as the kava ceremony, haka and hula dances, and the cross-gender Fa’afafine tradition are featured, alongside brutal practices such as the trade of desirable goods for sexual favors and floggings—casting colonization in a more accurate light.

About Lisa Reihana
Of Māori (Ngā Puhi, Ngāti Hine, Ngāi Tu) and British descent, Lisa Reihana (b. 1964, Auckland, New Zealand) reexamines colonial history, disrupting gender, time, power, and representational norms through her work. Her multidisciplinary practice spans film, sound, photography, spatial design, live-action, costume, and sculptural form. Her art making is driven by a powerful connection to community, which informs her collaborative working method described as kanohi ki te kanohi (face to face). She completed a master’s in design from the School of Visual Art and Design, Unitec, in Auckland in 2014 and graduated with a bachelor of fine arts from Elam School of Fine Arts, University of Auckland, in 1987. Reihana lives and works in Auckland, Aotearoa (New Zealand).

Contemporary Art at the de Young
The Contemporary Art Program installations Matt Mullican: Between Sign and Subject, Ana Prvački: Detour, David Hockney: Four Seasons, The Propeller Group: The Living Need Light, the Dead Need Music, and Specters of Disruption will be on view through the end of 2019 at the de Young museum.

Overseen by Claudia Schmuckli, the Museums’ Contemporary Art Program launched in 2016 to present the work of living artists in dialogue with the Museums’ unique buildings and encyclopedic collections. In its first three years, installations by Carsten Nicolai/ Alva Noto, Hilary Lloyd, Leonardo Drew, DIS, and Ranu Mukherjee transformed the de Young’s Wilsey Court. At the Legion of Honor, Urs Fischer, Sarah Lucas, Lynn Hershman Leeson, and Julian Schnabel each presented exhibitions in dialogue with the Beaux-Arts building and the permanent collection of works by Auguste Rodin.