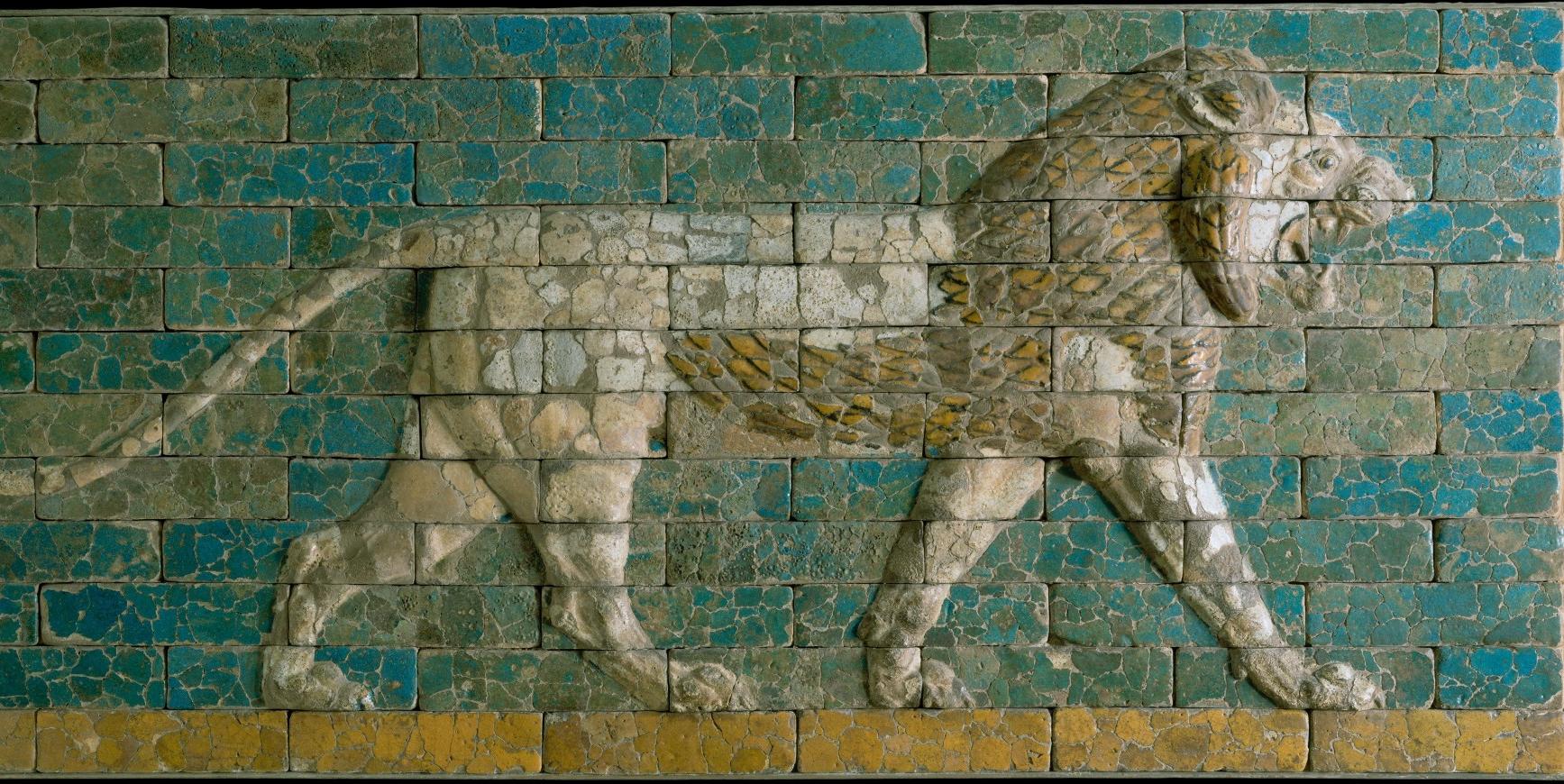 NEW YORK, NY. - The Institute for the Study of the Ancient World presents A Wonder to Behold: The Power of Craftsmanship and the Creation of Babylon’s Ishtar Gate, opening new avenues for understanding one of the most spectacular achievements of the ancient world. On view from November 6, 2019, through May 24, 2020, the exhibition features 180 objects that bring to life the synthesis of masterful craftsmanship and ancient beliefs that transformed clay, minerals, and organic materials—seen as magically potent substances—into this powerful monument.

A Wonder to Behold demonstrates how the master craftspeople who designed and built the Ishtar Gate and its affiliated Processional Way were not simply skilled technicians—though they were certainly that— but also artists, historians, and ritual practitioners known as “experts” (ummânū). They were believed capable of creating artworks that manifested divine powers on Earth, and the Ishtar Gate, offering entry into the imperial city of Babylon, was designed to be one such magically activated monument.

A Wonder to Behold has been organized by ISAW and co-curated by its Associate Director of Exhibitions and Gallery Curator, Clare Fitzgerald, PhD, with guest curators Anastasia Amrhein, an art historian specializing in the ancient Middle East (University of Pennsylvania), and Elizabeth Knott, PhD, a historian specializing in the textual and visual remains of the ancient Middle East (NYU).

Dr. Fitzgerald states, “ISAW is thrilled to present A Wonder to Behold, which follows the transformation of commonplace, if sacred, materials as they journey from the brickyards to one of the greatest monuments of the ancient world, a divinely protected and ritualized entryway to the inner city of Babylon. In so doing, the exhibition opens a window onto both ancient beliefs and superb artistic skills, and expands our understanding of the critical role of craftspeople in the ancient Middle East. ISAW is grateful to Anastasia Amrhein and Elizabeth Knott, who have brought their deep knowledge to this exhibition.”

Built over the course of King Nebuchadnezzar II’s reign (r. 604–562 BCE), the Ishtar Gate (named in honor of the Mesopotamian goddess Ishtar) was at the epicenter of a major empire that extended from presentday Iran to Egypt. In its final and most spectacular phase, the monument was built with brilliantly glazed bricks, molded in relief to depict hundreds of dragons, lions, and bulls—all set against a background the color of lapis lazuli. At once providing access to and protecting the heart of the sacred imperial city, these creatures inspired both admiration and apprehension. 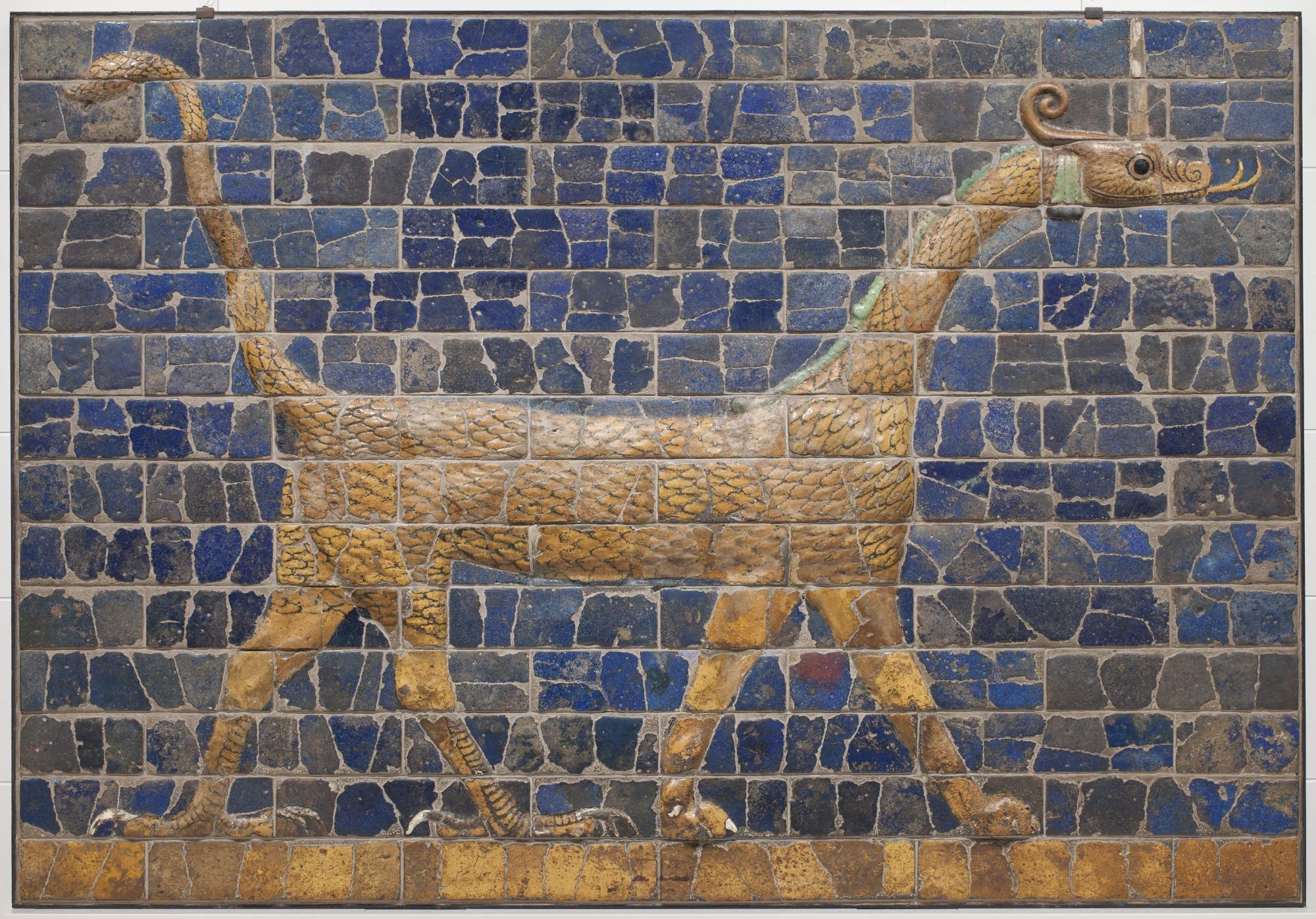 By the late 19th century, it appeared that all that was left of the Gate were glittering fragments of colorful glazed brick scattered among the rubble of collapsed clay architecture. But between 1899 and 1917, German-led excavations not only studied the glazed remains of the towering Ishtar Gate, but also excavated its molded (unglazed) foundations, which extended deep into the earth. Archaeologist Robert Koldewey sent almost 800 crates of fragments to Berlin, with the permission of the Ottoman, and later the Iraqi governments. Once there, the colorful remains were cleaned, stabilized, and sorted, then assembled piece by piece, creating first whole bricks and subsequently panels of brightly colored raised-relief beasts. These reconstructed ancient remains were joined with modern blue bricks to create a monumental reconstruction (albeit at a slightly smaller scale) of the Ishtar Gate and its affiliated Processional Way at Berlin’s Vorderasiatisches Collection, housed in the Pergamon Museum.

Today, a multi-national process of excavation, reconstruction, and conservation of the Ishtar Gate continues, both on-site and at various institutions. The monument may be experienced not only in Berlin, but also at Babylon, Iraq—now a UNESCO World Heritage Site—where earlier phases of the Gate still stand and visitors can experience its true scale and relationship to the ancient city.

The objects on view in A Wonder to Behold are on loan from a variety of international and domestic collections including the Louvre, the British Museum, the Metropolitan Museum of Art, and, notably, the Vorderasiatisches Museum. Together, they provide a vivid picture of the making of the Ishtar Gate, shedding light on the people who created it and the materials they engaged with and transformed.

The exhibition opens with an introduction to the gateway as revealed through its discovery and reconstruction. A variety of archival drawings, photographs, and objects demonstrate the immense complexity of this undertaking. A 1901 watercolor by archaeologist Walter Andrae, for example, shows the Babylonian system of fitters’ marks that he deciphered, revealing the painstaking process through which the monument was created. This process began by marking out the design on a wall of unadorned bricks, and continued with the molding, glazing, and baking of each individual brick before fitting them together, a task that is something like designing and assembling an intricate puzzle.

The Ishtar Gate and Processional Way represent the epitome of major developments in molding and glazing technologies that had taken place over the preceding centuries, enlivening architecture by bringing color and dimension to otherwise unadorned mud brick buildings. A reconstructed panel on view here shows one of the 120 molded and glazed lions that paraded out from the Gate and down the Processional Way. Believed to be powerful beings associated with the king’s role as protector of his people, the beasts are depicted in bold relief, projecting into the space of the viewer as they intimidated unwelcome visitors while protecting the inhabitants of the city. 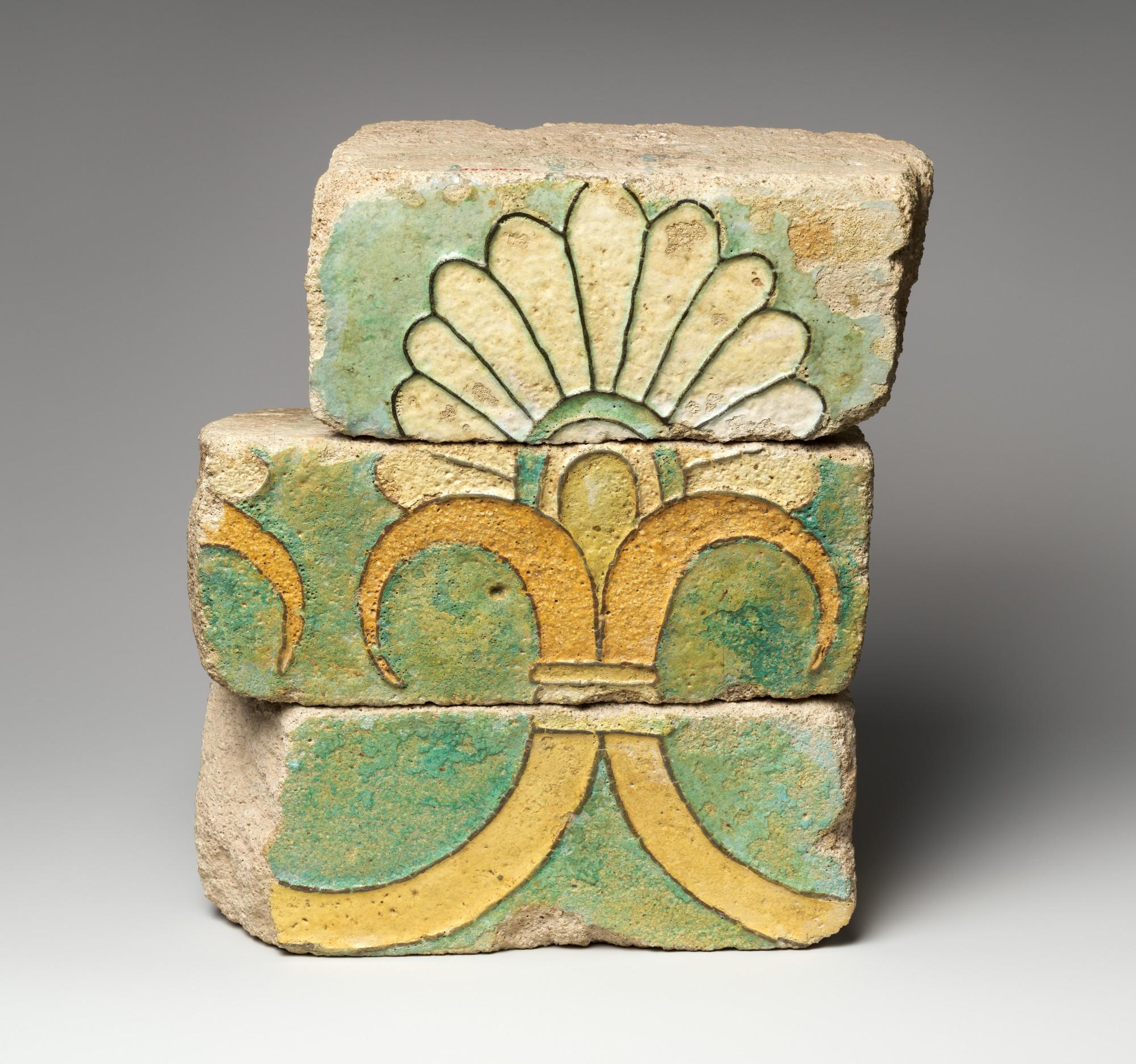 Other objects illustrate the links between the world of the gods and the Ishtar Gate through an exploration of the religious meaning of lions, bulls, and mušhuššu-dragons. These include an Assyro-Babylonian cylinder seal showing the fierce goddess Ishtar, who helped protect the city from enemies, with her lion, and a marble bowl dating from 2900–2600 BCE that demonstrates the continuity and ritual significance of the repeating bull image—which also appears on the façade of the Ishtar Gate—and its ritual significance, already understood to be ancient in Nebuchadnezzar II’s time.

The material components of the Ishtar Gate and Processional Way—clay and a glass-like glaze composed of ground stones and metal oxides—were endowed with metaphysical and magical qualities. The exhibition examines these substances, including their origins, sometimes in far-flung places; the techniques with which they were produced and worked; and the powerful cultural and religious beliefs attached to them.

Endowed with vital power in the ancient Middle East, clay was viewed as the stuff of creation and tied closely to the gods: ancient texts asserted that the first gods and first humans were created of clay. Clay was often used to create figures believed to be imbued with life and capable of acting on their creator’s behalf. As highlighted by a mold for a female figurine here, artists in the ancient Middle East did not share the modern emphasis on the new, but frequently replicated more or less identical images, each thought to be as powerful as the next. As such, molds like this one were understood as authoritative image sources, originally passed down to humanity from the gods.

A Wonder to Behold also includes a fragment of a baked clay plaque with a striding lion reminiscent of those on the Processional Way. This piece, which dates from late 3rd–early 2nd millennium BCE, shows the longevity of lion imagery created from molded clay. Figures like these, which were believed to be capable of effecting change in the lived world, were not restricted to monumental or public contexts, but could also be found in domestic houses and shrines. Although their exact purpose is unknown, they may have protected the household from dangers such as illness and misfortune, as well as from demons, or they may have been directed to perform more specific magical tasks.

A brick from Babylon containing the cuneiform inscription of Nebuchadnezzar II illustrates clay’s inherent malleability and receptivity to touch. After being molded, bricks like these, which were used in official constructions, were stamped with the king’s inscription and laid out to dry in the sun or sometimes baked in a kiln. While this brick was still soft, it was also impressed with the paw of a wandering dog—a humble, everyday touch that gives us a direct, affective point of access to the ancient world.

A cuneiform tablet from the Middle Babylonian Period (ca. 1300–1200 BCE) records a recipe for making red glass that highlights the secret alchemical knowledge of ancient Middle Eastern craftspeople, while an Egyptian glass vessel from ca. 1400–1300 BCE showcases the range of brilliant colors that these experts were able to achieve. In fact, human-made materials were believed to be as powerful as naturally occurring ones, their brilliance and shine no less meaningful. The recipes for manufacturing these magical substances, which prescribed specific rituals to ensure a successful outcome, were closely held.