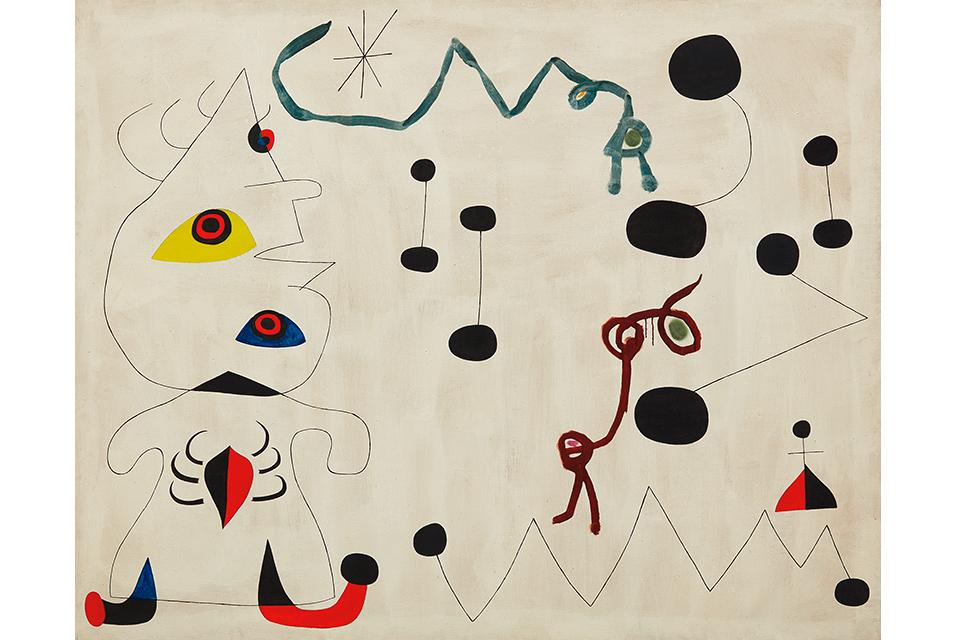 NEW YORK – 25 SEPTEMBER 2018 – On 15 November, Phillips will offer Joan Miró’s Femme dans la nuit among the star lots of the 20th Century & Contemporary Art Evening Sale. Painted in 1945, the work is an important example of Miró’s output created during the Second World War and was included in the important 1962 retrospective of the artist’s work at the Musée National d’Art Moderne in Paris. The painting was originally acquired from the artist by Miró’s most important art dealer in the United States, Pierre Matisse, very shortly after his much acclaimed show of the Constellations. Estimated at $12-18 million, Femme dans la nuit will be unveiled at Phillips Berkeley Square on 28 September, prior to being offered for sale in New York in November.

Hugues Joffre, Phillips’ Senior Advisor to the CEO, said, “Joan Miró’s Femme dans la nuit is one of the finest examples from his celebrated series of paintings created in the first five months of 1945, during which time he focused solely on the fourteen so-called white-ground paintings. Many examples from this group are now held in esteemed museum collections, including the Museo Nacional Centro de Arte Reina Sofia in Madrid, the Kunstsammlung Nordrhein-Westfalen in Dusseldorf, the Fundació Joan Miró in Barcelona, the Albright-Knox Art Gallery in Buffalo, New York, and the Guggenheim Museum in New York, making the present work among the most significant to remain in private hands.”

Femme dans la nuit was painted on 22 March 1945, while Miró was living in Spain. Having fled France shortly after the German invasion several years earlier, he had settled in Majorca and Catalonia, and had remained there relatively isolated from the conflict, leading a quasi-monastic existence during the Franco dictatorship.

Miró’s notebooks indicate the extent to which he planned Femme dans la nuit and its sister-works during the war years, while also revealing how much the concepts evolved. He chose to prime the canvases with diluted oil paint so that he would not find himself approaching a blank white space, but instead an arena already filled with subtle textural suggestions.  Works from the current series echo Miro’s earlier Constellations, a celebrated group of works on paper created with a painstaking attention to detail, with both series anchoring each end of the Second World War.  Along with the medium and format of these series being fundamentally different, Miró also refined the iconography of his earlier Constellations, avoiding their density and allowing more emphasis on the individual elements. This is evidenced in the present work where Miró has deliberately distilled his visual iconography and lent it a greater impact by presenting it against the atmospheric white backdrop. His dramatic return to painting large works after years working on a more diminutive scale would inspire the artist to revisit his revolutionary mode of covering the ground of his canvases that was quintessential to his work at the height of his career in the years before the war.

Less than two months after the work was painted, Miró would write to Christian Zervos that, during this time, he worked on entirely new aspects of his oeuvre. By this point, the tide of the war had turned. It was more than half a year since the liberation of Paris, which may explain the qualified exuberance and light to be found in Femme dans la nuit. An electric energy runs through the painting and this is only increased by the gestural meanderings in grey and brown. These reveal a dramatic immediacy; they are a proof of life, an emphatic point of contact between the artist and the canvas.

The earlier exhibition at New York’s Museum of Modern Art in 1941-42, and the Constellations presentation at the Pierre Matisse Gallery, greatly contributed to the mounting interest of critics, the collecting public, and the artist community. Several of the artists who would soon spearhead Abstract Expressionism, in particular Arshile Gorky, Robert Motherwell and Jackson Pollock, had already shown their fascination with Miró’s ability to fuse automatism with expression, and used this as a springboard for their own pictorial adventures.

Femme dans la nuit was selected to be included in a 1946 contract between Miró and Pierre Matisse that involved Matisse’s acquisition of a large portion of the wartime work, as well as anything created over the coming few years, and was acquired by Pierre Matisse before 1949. Femme dans la nuit  would later be included in the Acquavella Galleries’ 1972 exhibition of Miró’s work, for which it served as the front cover of the catalogue. It was here that the consignor’s family acquired the painting circa 1973 and the upcoming November auction marks the first time that the work will be sold publicly