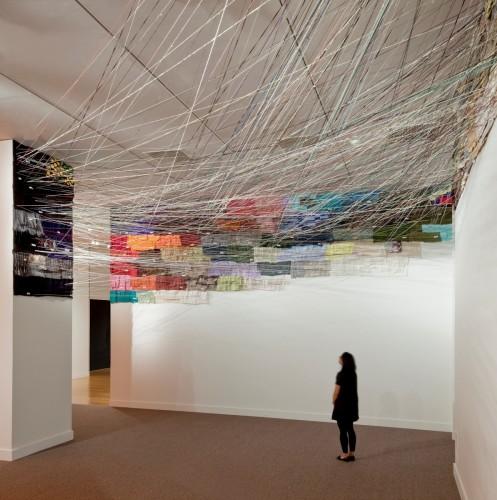 Photo courtesy of the artist.

The Philadelphia Museum of Art presents an exhibition dedicated to the work of Jean Shin, a Korean-American artist widely acclaimed for her practice of dramatically transforming unlikely objects into monumental installations. Jean Shin: Collections will feature six large-scale installations made of crowd-sourced materials as well as a single channel video. Constituted from gathered and donated clothing and apparel, such as shoes, sweaters, and uniforms, these works are utilized by the artist to create a materials-based meditation on identity, society, and community and to address questions of exclusion and inclusion, the familiar and the unfamiliar.

Central to the exhibition is Unraveling (2006-2018), an assemblage that maps a dense social network among members of the Asian-American arts community. It consists of sweaters that have been donated by individuals, then disassembled and reconfigured by the artist to create an intricate and tangible web of connectedness. The core of this work was created with sweaters collected from New York City’s Asian-American art community in 2006 and was augmented as it traveled in an exhibition across several US cities. Sweaters collected in recent months from the Philadelphia’s Asian-American art community will be the exhibition’s newest addition. One sweater, contributed in 2005, belonged to Hyunsoo Woo, the Museum’s Maxine and Howard Lewis Curator of Korean Art, who has organized Jean Shin: Collections.

For Armed (2005), with the assistance of the Harbor Defense Museum at Fort Hamilton, Brooklyn, New York, Shin visited, interviewed, and collected uniforms from current and former members of the Army, Navy, Air Force, and Coast Guard. Her contact with the military garments’ donors enabled her to reflect on the relationship between personal histories and collective memories. As uniforms impose a communal identity on the individuals who wear them, the stories shared with Shin by their donors were private and personal at the same time. Her practice of laborious and time-consuming transformation of the materials she gathered resulted in a monumental mural of disembodied army uniforms.

In Worn Soles (2001), Shin displays soles taken from hundreds of pairs of collected shoes face-up and arranges them into groups moving in one direction or dispersing to resemble the movement in our everyday lives. Born from the same castoff shoes, Hide focuses upon their material qualities. Cut-out leather pieces are flattened and paired by attaching them at the heels. The units are then arranged together by gender, color, and texture, mimicking naturally-occurring groupings in our society. In this work, discarded shoes become surrogates for their former owners.

“Jean Shin’s exceptional installations represent a complex interweaving of concerns related to identity, body, community, and networks of human relationships through the use of reconstructed and transformed banal objects.” said curator Hyunsoo Woo. “Her radically altered objects, sometimes unrecognizable, call the viewer’s attention to their material essence as well as to the beauty found in recontextualizing familiar things.”

The artist was raised in the suburbs of Maryland where her parents owned a grocery store. Her art is informed, in part, by her experience as an immigrant, with its emphasis on extreme hard work, utilizing materials close at hand, and the celebration of potential.

Shin attended the Skowhegan School of Painting and Sculpture, and received a BFA and MS from Pratt Institute, where she is adjunct professor of fine arts. She was trained as a painter, and her early study of life drawing and anatomy became the source of her interest in the human body. Her work is deeply attuned to global currents in contemporary art and important precedents in 20th century art, the tradition of adapting daily ephemera and found objects into works of art tracing back to Marcel Duchamp’s (1887-1968) readymades. Shin also names as her sources of inspiration the artists Yoko Ono (born1933), Eva Hesse (1936-1970) Louise Nevelson (1899-1988), and Félix Gonzalez-Torres (1957-1996), as well as the Arte Povera movement.

Her works have been shown at more than 150 museums and cultural institutions, including in solo exhibitions at the Museum of Modern Art, New York; the Fabric Workshop and Museum, Philadelphia; and the Smithsonian American Art Museum, Washington, DC. She recently completed a landmark commission, Elevated, for New York City’s new Second Avenue subway.

Shin’s work is represented in the collections of Rose Art Museum, Brandeis University, Waltham, MA, and Smithsonian American Art Museum, Washington D.C. The artist lives and works in Brooklyn, New York. Learn more about the artist on her website.

Support
This exhibition was made possible by The Coby Foundation, Ltd., Barbara B. and Theodore R. Aronson, and other generous donors.

Learn more about this exhibition.
Tags
Philadelphia Museum of Art