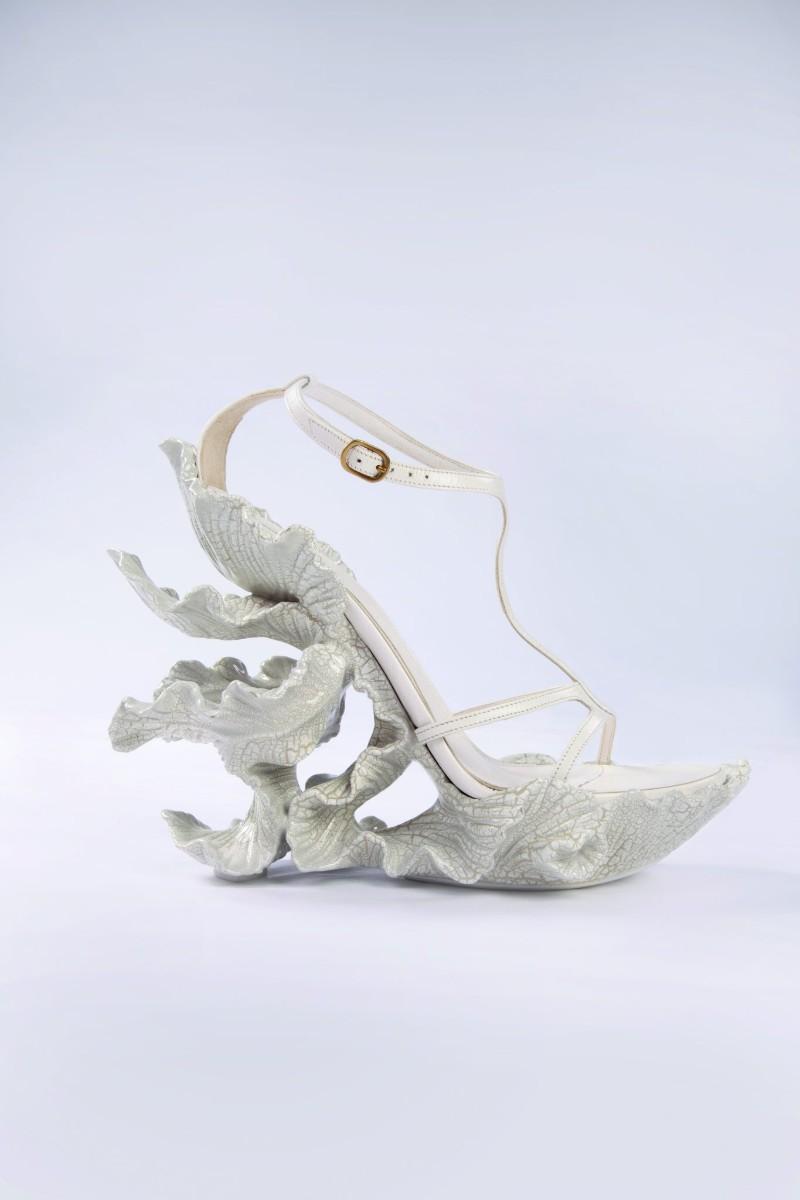 Full of glamour, theatricality, escapism, but also wit, innovation, and issues confronting our time, New Orleans Museum of Art’s first presentation of fashion design is an exhibition unlike any ever seen in New Orleans. A Queen Within: Adorned Archetypes, on view from February 21 to May 28, 2018, brings together a wild array of more than one hundred gowns, headpieces, shoes, jewelry, and images by the most insightful fashion designers, artists, and photographers of the past ten years. The exhibition also highlights photographers and artists such as June Canedo, Raúl de Nieves, and Joanne Petit-Frére, who use the adorned body to depict stories from communities around the word and place them within a global historical context.

A Queen Within includes such household names as Alexander McQueen, Prada, Chanel, and Comme des Garçons, intermixed with other boundary-pushing designers, including Chromat’s body-positive architectural looks, Richard Mnisi’s experimental videos, and Iris van Herpen’s dresses that engage new technology. These spectacular and thoughtful designs will be displayed in an even more spectacular gallery presentation, with the whole exhibition stretching ideas about fashion’s possibility as a thoughtful art form.

Showcasing rare pieces from one of the world’s largest private collections of Alexander McQueen, A Queen Within explores different archetypes of a queen—or metaphorically, of a woman— and how the mythic queen character manifests through storytelling in fashion. McQueen (British, 1969–2010) masterfully built narratives through his collections and runway shows. Inspired by his sensitivity to historical and literary research, this exhibition uses both fashion and its bold presentation to explore seven archetypal queens: The Mother Earth, Sage, Magician, Enchantress, Explorer, Heroine, and Thespian. These representations are derived from recurring motifs found across myths and fairy tales of world literature. The story and complexity of each feminine archetype—her powers, her weaknesses, her aesthetics—are articulated in A Queen Within through pioneering fashion, photography, video, and exhibition design.

Centered around a rainbow crystal-printed ensemble from McQueen’s 2009 Natural Dis-tinction, Un-natural Selection collection, A Queen Within opens with a rainbow-hued cluster of dresses dedicated to the Thespian Queen. The Thespian has a gift for entertainment and imagination, but the twin masks of comedy and tragedy are the true source of theater’s power. McQueen’s fashion was the ultimate in theatrical glamour, but was very often deepened with a complex, dark undercurrent. Thespian’s show-stopping group of nine McQueen gowns includes a 2008 sequined cocktail dress emblazoned with the face of the designer’s muse, the late English stylist/magazine editor Isabella Blow, who died tragically in 2007. McQueen’s red tartan and black lace dress is from one of his most iconic shows: the 2006 Widows of Culloden collection. This emotional fashion show celebrated the designer’s Scottish ancestry through romance and exquisite craftsmanship, but was ultimately a melancholy look at Scotland’s long history of brutal subjugation by their English neighbors.

The Mother Earth Queen celebrates the powerful life-giving, protective force of women. This is fashion that is inspired by flora and fauna but also a deep ethical concern for our fragile ecosystem—a concept materialized through the use of sustainable garments. Shown amid a stunning floral labyrinth display, Mother Earth includes exquisite gowns delicately embroidered with botanical motifs, an ethereal cloud cloak by Maison Martin Margiela from 2009, a towering bird headpiece by Charlie le Mindu, as well as conceptual designs about the future health of our planet. A 2016 Vivienne Westwood coat from the Mirror the World collection campaigns for a united effort to save Venice, and the rest of our planet, from the effects of climate change.

With mannequins on mirrored plinths facing off to metaphorically battle with light strip “swords,” the section dedicated to the Heroine Queen imagines a brave warrior with a strong sense of morality and a willing readiness to fight. The Heroine Queen section brings together a powerful group of designs united by their use of metal, stone, and uniform details, including new, radical takes on traditional armor like Chan Luu’s Swarovski crystal chainmail and Serena Gili’s protective fiberglass skirt. A highlight of Heroine Queen is Dutch designer Iris van Herpen’s Snake Dress, a 2011 gown that wraps the body in serpentine forms made of black acrylic sheets. According to van Herpen, who occasionally clears her mind with the sport of freefall parachute jumping, Snake Dress references the strong “fight or flight” feelings just before making a leap from an airplane. Van Herpen explains that before a freefall, “all my energy is in my head and I feel as though my mind is snaking through thousands of bends.”

The woman of Explorer Queen is a strong individual—a seeker, adventurer, and rebel. The Explorer Queen’s clothing challenges the authority of our status quo, featuring thoughtful designs that question the norm of a “fashionable” body type as a young, tall, thin model. The A Queen Within exhibition curator Sofia Hedman-Martynova of MUSEEA is passionate about these widened views of beauty: “Minna Palmqvist’s mannequin busts capture the beauty of nonconforming bodies, showing how fashion’s pioneers are moving away from the standard size zero dress form. Gypsy Sport’s gender-fluid work is the voice for a new generation that calls for a more global, inclusive world.” A video in the exhibition shows Gypsy Sport taking to the Paris streets to cast models for the label’s Spring/Summer 2018 runway show. This unorthodox casting process demonstrates the New York designer’s commitment to diversity, calling for “no racism, no sexism, no ableism, no ageism, no homophobia, and no xenophobia.”

The Sage Queen is educated and wise, using her analytical knowledge to think deeply about the world. A Queen Within interprets this theme with a showcase of technologically advanced garments and associated films, touching upon designers who engage with new materials and concepts about the changing function of clothing in the future. The Magician Queen is a visionary artist, one who would emphasize fashion’s potential for creativity and visual experimentation with less regard for practical use. This theme features designs by Anrealage, Hideki Seo, Raul de Nieves, and Antoine Peters that boldly make use of the space around the body in a way that makes the body itself almost superfluous. This is fashion as artistic sculpture.

Presented within a glowing translucent white cube, the fashion of the Enchantress Queen celebrates the femme fatale. The Enchantress has sexual appeal, passion, and a mesmerizing wit. Her ethereal designs obscure and reveal, and feature seductive attributes like loose hair, shiny lacquer, white teeth, and luscious lips. Within a bed of pampas grass, the Enchantress Queen is anchored by stunning fashions featuring feathers, with an appealing gold fringed gown by Gucci, and from McQueen a fuchsia evening gown, a white floating cloud of a dress, and a stunning mint green swing dress hemmed with ostrich feathers. Enchantress includes a tempting selection of sweet but vicious heels by McQueen, Prada, and Fantich & Young. Through the rubric of these seven multi-faceted queens—from the seductiveness of an Enchantress to the benevolence of a Mother Earth to the power of a Heroine—A Queen Within: Adorned Archetypes shows how contemporary designers engage with the competing, complementary and often contradictory ideals we have about femininity. This remarkably thoughtful exhibition at NOMA reveals fashion’s importance as a conveyer of physical beauty as well as incisive cultural commentary on how artistic fashion engages with pain, humor, history, and the future.

A Queen Within: Adorned Archetypes is an exhibition developed by Barrett Barrera Projects and MUSEEA, and toured internationally by Flying Fish. Presentation of this exhibition at the New Orleans Museum of Art is sponsored by the Eugenie and Joseph Jones Family Foundation. Additional support is provided by Ashley Longshore, Joseph: A Women’s Fashion Boutique, and Millie Davis Kohn.