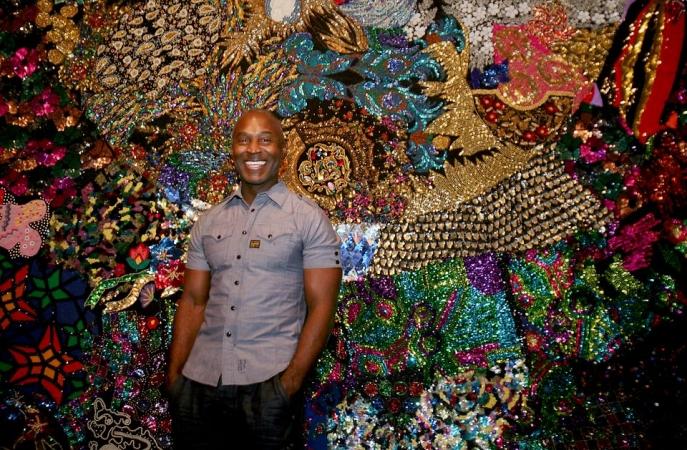 NASHVILLE, Tenn. (October 17, 2017)—The Frist Center for the Visual Arts presents Nick Cave: Feat., a dynamic survey of the noted Chicago-based artist’s practice, on view in the Upper-Level Galleries through June 24, 2018. The exhibition contains an array of engaging works that are broadly accessible to audiences of all ages and backgrounds and, on a deeper level, speak to issues of identity, racial equity, and social justice. Cave will also direct the community-based project Nick Cave: Feat. Nashville, a monumental interdisciplinary performance work featuring local talent that will be presented twice on April 6, 2018.

Nick Cave (b. 1959) produces work in a wide range of mediums, including sculpture, installation, video, and performance. “Cave’s creations, bursting with color and texture, are optical delights that can be enjoyed by everyone,” says Frist Center curator Katie Delmez. “A closer look reveals that they also address racial profiling, gun violence, and civic responsibility.”

His trademark soundsuits, human-shaped sculptural forms composed of a variety of found and repurposed commonplace materials, were initially an artistic response to the beating of Rodney King by policeman in Los Angeles more than twenty-five years ago. “As an African American man, Cave felt particularly vulnerable after the incident, so he formed a type of armor that protected its wearer from profiling by concealing race, gender, and class,” says Delmez. The soundsuits are now part of an ongoing body of work in which items such as buttons, plastic hair-beads, domestic textiles, and vintage toys are upcycled into elaborate assemblages based on the artist’s own body. The series has become a collective army of resistance to profiling and violence, responding not only to police brutality but any crime motivated by hate—from the killing of Emanuel AME church members in Charleston to the Pulse nightclub massacre in Orlando.

Ten soundsuits (2011–2017), will be displayed runway-style in the first gallery of the exhibition. “The wearable sculptures—visually related to Mardi Gras Indian costumes, African ceremonial attire, and Tibetan folk attire—illustrate how Cave’s practice straddles the visual and performing arts,” says Delmez.

Along with themes of equity and human connectivity, Cave wants his art to spark viewers’ creativity and aspirations. This exhibition’s title, Feat., refers to the exceedingly hard work that goes into attaining success. It also references the terminology used to highlight performers in promotional materials—a nod to Nashville’s creative community.

Through immersive installations, Cave intends to provide a space—away from chaotic contemporary life—where viewers’ imaginations can thrive. The runway of soundsuits will be surrounded by walls covered with thousands of shimmering buttons attached to dark fabric. These Button Walls (2013) are meant to suggest a starry night sky, and memories of gazing at it with his six brothers as a child in rural Missouri. “Cave’s emphasis on the imagination is not to escape reality, but to create new ideas to help us navigate, maybe even improve, our condition,” says Delmez.

Viewers may also feel enveloped by the life-size projection of the video, Blot (2012), which features a figure wearing black raffia soundsuit in constant motion against a stark white background. The endlessly morphing forms are open to personal interpretation, similar to blots on a Rorschach test.

The Architectural Forest (2011)—rarely on view since its creation—is a large-scale hanging installation with thousands of brightly colored beads and pseudo-psychedelic patterned strands of bamboo and is best appreciated by multiple viewpoints.

The exhibition will conclude with densely assembled wall-mounted sculptures dripping with ceramic birds, painted metal flowers, beads, crystals, and other ornaments found in thrift stores—even antique gramophones. These works bestow value on memories and objects that may be overlooked by mainstream society, an underlying theme throughout Cave’s practice.

“Through the exhibition Feat. and the accompanying performance Nick Cave: Feat. Nashville, Cave hopes to provide a transformative, inspirational, and empowering opportunity for all,” says Delmez.

In conjunction with the exhibition, Cave will direct a months-long community engagement project that will culminate in two free public performances. These major events will feature live dance, music, soundsuits, spoken word and much more. Cave’s original compositions will engage Middle Tennessee’s increasingly multicultural population through ten social services organizations, including Conexión Américas and the Oasis Center. The performances will showcase local talent from performing arts organizations and universities, including dozens of professional and student dancers, musicians working in a range of genres, vocalists, poets, spoken word artists, and others.

Cave’s wondrous and awe-inspiring performances explore timely themes of identity, social justice, and the power of art to transform our world. In one of the compositions, members of our community will cover Cave’s body with up to 30 beaded blankets to symbolize a transfer of the weight and burdens we carry in our individual lives. The blankets will be made during “bead-a-thons” organized by the Frist Center’s sustaining community partners, including Conexión Américas, Down Syndrome Association of Middle Tennessee, Edmonson Pike Branch Library, FiftyForward J. L. Turner Center, Hadley Park Community Center, Oasis Center, Poverty & the Arts, Safe Haven Family Shelter, and Thistle Farms.

“At the heart of Cave’s practice is his belief that art can be an agent of connectivity and compassion,” says Delmez. “A self-described messenger, he wants his work to extend beyond museum and gallery walls to reach and include a population that may not often experience meaningful aesthetic or cultural events.”

April 6, 2018: Matinee at 10:00 a.m. for schools, homeschooled students, and families; evening performance at 7:30 p.m. for the general public. Both performances will be held at the Schermerhorn Symphony Center. Tickets will be available through the Frist Center’s website in mid-October on a first-come, first-served basis.
Visit fristcenter.org/featnashville for more information.

Nick Cave was born in Fulton, Missouri, in 1959. He received a BFA from the Art Institute of Kansas City and an MFA in fiber arts from Cranbrook Academy of Art, outside of Detroit. Cave’s work has been featured in monographic exhibitions around the globe, at venues such as the Cranbrook Art Museum, the Denver Art Museum, the Institute of Contemporary Art in Boston, and the Massachusetts Museum of Contemporary Art, and is housed in the permanent collections of many major institutions, including the Brooklyn Museum, the Detroit Institute of Arts, the Hirshhorn Museum and Sculpture Garden, and the Museum of Modern Art. Cave has received several prestigious awards, among them the Joan Mitchell Foundation Award, the Artadia Award, the Joyce Award, and multiple Creative Capital Grants. He has lived and worked in Chicago since 1990 and is the Stephanie and Bill Sick Professor of Fashion, Body, and Garment at the School of the Art Institute of Chicago. He is represented by Jack Shainman Gallery in New York.

An unorthodox exhibition “catalogue” will accompany the Frist Center’s presentation. It is a large tapestry or spreadsheet of sorts, made of a durable, weather-resistant material that, unfurled, can potentially serve an array of functions—wall art, a picnic blanket, a tablecloth—depending on the user’s imagination and preference. In the spirit of Cave’s sculptural work and public performances, it also offers the viewpoints of multiple perspectives from a cross-section of disciplines. Collaborators on past projects, including choreographer Bill T. Jones, and current Nashville creatives, both established and emerging, were invited to reflect on aspects of Cave’s practice, such as justice and transformation. “The somewhat unwieldy presentation of the curatorial essay and responses is intended to recall a time when people had to interact physically with documents like newspapers or printed maps to access information, unlike today when nearly everything can be retrieved from our phones” said Frist Center curator Katie Delmez. “Cave also wants to underscore the importance of good art and design in our everyday lives.”

In partnership with Vanderbilt University’s Office of Community, Neighborhood, and Government Relations, the Frist Center presents “Food for Thought” lunchtime conversation with Vanderbilt professors, Frist Center curators, and other members of the Nashville community. This session, inspired by the exhibition Nick Cave: Feat., will delve into how contemporary performance art can offer powerful and transformative opportunities for communities.

Bring your family and friends to the Frist Center to celebrate the opening of the exhibition Nick Cave: Feat. This FREE Family Festival Day will be filled with unique gallery experiences, fun art-making activities, a silent disco, a grand finale performance by the VSA TN Movement Connection Dance Program, and so much more! Community members who participated in the creation of the exhibition Extrasensory are invited to see their work in the Conte Community Arts Gallery, and visitors are invited to dress in bright colors, wild patterns, or anything that stimulates the senses! All programs are free and offered on a first-come, first-served basis while supplies last.

Nick Cave: Feat. includes dynamic works in diverse mediums, from sculpture to video. While the engaging visuals may draw visitors to the exhibition, deeper conversations reveal how Cave delves into issues of identity, social justice, and the expressive power of contemporary art. Join Katie Delmez, Frist Center curator, to take a deeper look at the meanings behind Cave’s work.