New Exhibition at the Met Brings Together Treasures From Versailles 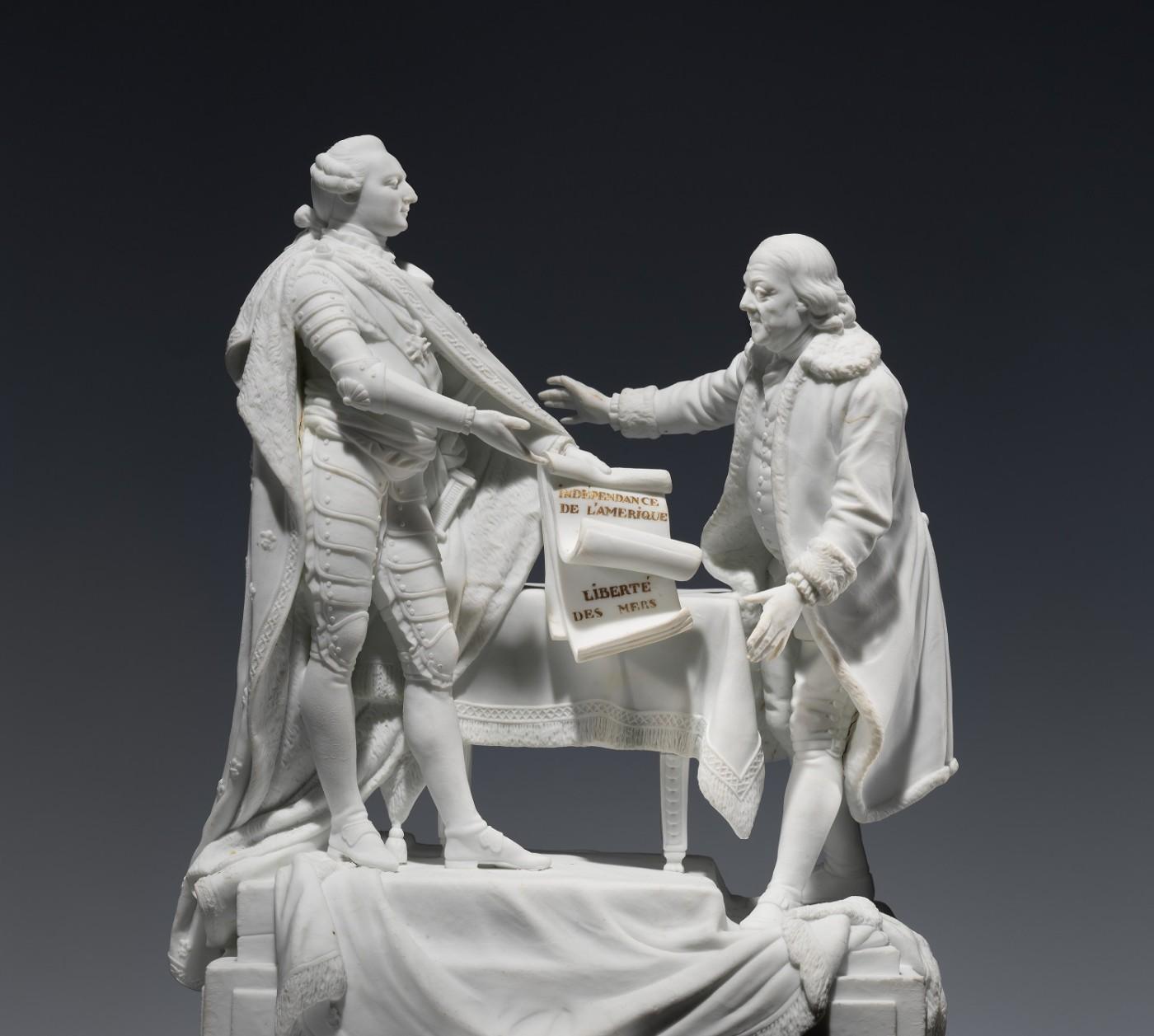 Courtesy of the Met

The palace of Versailles has attracted travelers since it was transformed under the direction of the Sun King, Louis XIV (1638–1715), from a simple hunting lodge into one of the most magnificent public courts of Europe. French and foreign travelers, royalty, dignitaries and ambassadors, artists, musicians, writers and philosophers, scientists, Grand Tourists and day-trippers alike, all flocked to the majestic royal palace surrounded by its extensive formal gardens. Opening April 16 at The Metropolitan Museum of Art, Visitors to Versailles (1682–1789) tracks these many travelers from 1682, when Louis XIV moved his court to Versailles, up to 1789, when Louis XVI (1754–1793) and the royal family were forced to leave the palace and return to Paris.

The exhibition brings together nearly 190 works from The Met, the Palace of Versailles, and more than 50 lenders worldwide. Through paintings, portraits, furniture, tapestries, carpets, costumes, porcelain, sculpture, weapons, guidebooks, and more, the exhibition illustrates what visitors encountered at court, what kind of welcome and access to the palace they received, and what impressions, gifts, and souvenirs they took home with them.

The exhibition is made possible by The International Council of The Metropolitan Museum of Art.

It is organized by The Metropolitan Museum of Art and the Palace of Versailles.

Versailles was always truly international and surprisingly public. Countless visitors from around the world were welcomed at the palace. The openness reflected both a long French tradition of granting the king’s subjects access to their sovereign and a politically calculated display of the French State’s power and wealth. Many visitors described their experiences and observations in correspondence and journals. Court diaries, gazettes, and literary journals offer detailed reports on specific events and entertainments as well as on ambassadorial receptions that were also documented in paintings and engravings.

Informed by these surviving records, the exhibition unfolds in 12 thematically organized galleries to convey the unforgettable experience of visiting Versailles in the 17th and 18th centuries.

Exhibition visitors will first encounter a large Gobelins tapestry dating to 1673–77. Woven with shimmering gold and silver threads, it depicts the king riding in his carriage toward the palace. The following galleries capture the modes of transportation to Versailles and the French code of dress. Among the reasons to visit the royal residence were its extensive gardens and the prized opportunity to catch a glimpse of the king. Highlight works include a beautiful robe à la française believed to have been worn by the wife of renowned textile manufacturer Christophe-Philippe Oberkampf for her audience with Marie Antoinette, three animal sculptures that were once part of the fountains in the Labyrinth, and uniforms and weapons of the king’s household.

The exhibition proceeds to focus on the different types of visitors to Versailles. Overseas ambassadors were received with great fanfare in the sumptuous Hall of Mirrors. Often at the palace to negotiate trade deals, they brought exotic gifts, including a recently discovered silver inlaid cannon given to Louis XIV by the Siamese ambassadors. Incognito visitors were those who assumed lower-level titles to avoid the protocol expected of royal guests. The exhibition features a fashionable French hunting costume presented to one of these incognito visitors, the Crown Prince and future Gustav III of Sweden. Portraits of some travelers, along with souvenirs and guidebooks, are also on view.

A number of Americans journeyed to Versailles, either as tourists or diplomats. Benjamin Franklin first visited Versailles in 1767 and played a significant role especially after 1776, when France became the colonists’ only military ally in their rebellion against Great Britain. Franklin captivated the French, shamelessly playing to their expectations of Americans, forgoing a wig and dressing in plain, unadorned clothes. The exhibition features one of Franklin’s suits, on loan from the Smithsonian’s National Museum of American History and rarely displayed to the public, as well as his portrait by Joseph Siffred Duplessis and French commemorative porcelain. Also displayed are Thomas Jefferson’s passport signed by King Louis XVI and a gold-hilted sword presented to John Paul Jones.

The exhibition concludes with the dramatic events of October 1789, when an angry mob forced the royal family to return to Paris. Upon visiting the abandoned palace in June 1790, Russian writer Nikolai Karamzin poetically compared Versailles without a court to a body without a soul. Yet his written reflection on the experience—“I have never seen anything more magnificent than the palace of Versailles”—is a testament to visitors’ enduring fascination with the former royal residence, even to this day.

The exhibition design is meant to evoke the grandeur and opulence of Versailles. Five galleries with aligned doorways were constructed to emulate the enfilade of rooms, generating a long theatrical vista and a sense of anticipation for the visitor. Custom-designed wallpaper suggests the defining architectural elements of the palace’s interiors—its marble inlays, pilasters, gilded paneling, wall hangings, and mirrors.

An immersive audio experience brings alive the impressions of visitors to the château and court of Versailles in the 17th and 18th centuries. Using high-quality headphones, listeners can hear dramatizations adapted from actual visitor accounts, produced in atmospheric 3-D soundscapes. The rich, binaural sound evokes the setting, from courtiers walking on a marble staircase to a singer performing a Handel aria in a private salon. Part of the audio production took place at Oldway Mansion, a country house in Devon, England. The unique estate, rebuilt in the style of the palace of Versailles, provided acoustics that ultimately lend the audio experience a compelling authenticity.

The audio experience is free for all visitors to The Met’s exhibition. It is sponsored by Bloomberg Philanthropies. 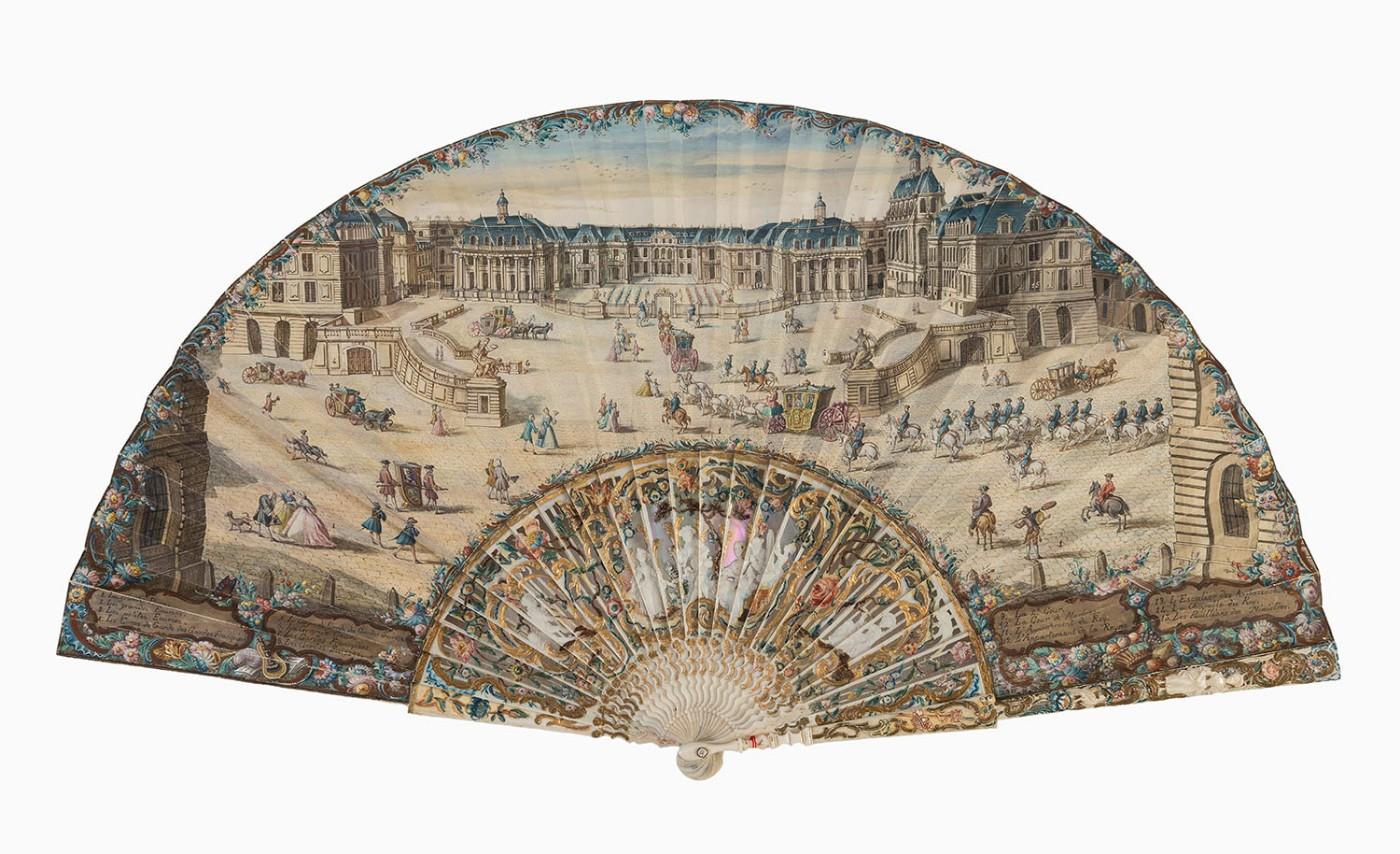 Visitors to Versailles (1682–1789) is organized by Daniëlle Kisluk-Grosheide, the Henry R. Kravis Curator in the Department of European Sculpture and Decorative Arts at The Met, and Bertrand Rondot, Senior Curator at the Palace of Versailles. Design is by The Met Design Department. Design direction is provided by Emile Molin and Brian Butterfield. Exhibition design is by Alejandro Stein and Katharina Weistroffer; graphic design is by Ria Roberts with support from Patrick Herron, Frank Mondragon, and Tal Pritzker; lighting design is by Clint Ross Coller, Richard Lichte, and Amy Nelson; and production is by Maanik Chauhan and David Stith. Audio experience is by Nina Diamond of The Met Digital Department.

The exhibition is accompanied by a catalogue published by The Metropolitan Museum of Art and distributed by Yale University Press. The book is available for purchase in The Met Store (hardcover, $65).

The catalogue is made possible by the Diane W. and James E. Burke Fund and The Andrew W. Mellon Foundation.

A series of events and performances will complement the exhibition. On April 21 (7 p.m.), the early-music vocal group TENET and the contemporary Metropolis Ensemble will present a program with two world premieres by cellist Timo Andres and musician Caroline Shaw. Opera Lafayette will perform Opera in Versailles on May 3 (7 p.m.). Master chef and food writer Yotam Ottolenghi will create a Versailles-themed menu of dinner and desserts on June 19 and 20 (7 p.m.).

The role of the Palace of Versailles in 17th- and 18th-century Europe will be discussed in a Sunday at The Met program on April 22 and a symposium on April 30. The Short CourseThe Kings of Versailles will take place April 14, 21, and 28 (2 p.m.); registration required. A two-part lecture on May 31 (3 p.m.) will focus on the gardens of Versailles.

Opera in Versailles is made possible by The Isaacson-Draper Foundation with additional support from the Amphion Foundation.

The exhibition Public Parks, Private Gardens: Paris to Provence, through July 29, 2018, illustrates the important role of parks and gardens in 19th-century French life. When viewed in tandem with Visitors to Versailles (1682–1789), visitors can develop a new appreciation of French culture in the late 17th through early 20th century. The exhibition is made possible by the Sam and Janet Salz Trust, the Janice H. Levin Fund, and The Florence Gould Foundation.

An installation of works on paper—Selections from the Department of Drawings and Prints: Life at Court—will explore various aspects of not only the French court at Versailles, but also the many other princely, stately, royal, and papal courts in the early modern period. It will be presented May 1 through July 30, 2018.