National Portrait Gallery Presents “Black Out: Silhouettes Then and Now” 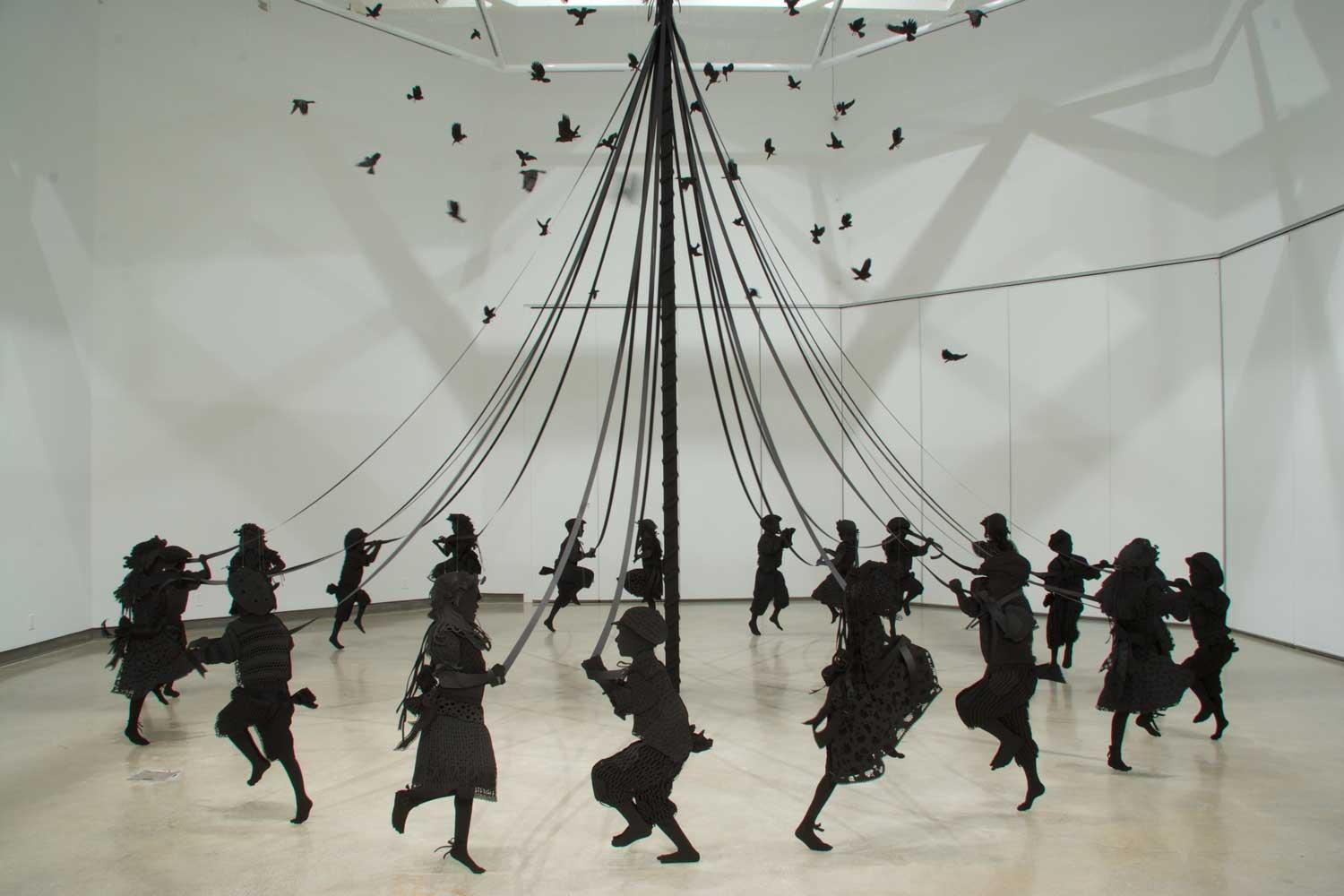 The Smithsonian’s National Portrait Gallery will present “Black Out: Silhouettes Then and Now,” opening May 11, as the first major museum exhibition to explore the art form of cut-paper profiles in terms of their rich historical roots and powerful contemporary presence. Well before the advent of photography in 1839, silhouettes democratized portraiture. Offering virtually instantaneous likenesses of everyone from presidents to those who were enslaved, silhouettes cost far less than oil paintings and could be made with inexpensive materials. Museums have paid little attention to the art form, but “Black Out” aims to broaden the traditional American art canon by placing silhouettes—and their subjects—at the forefront.

The exhibition, which primarily features works on paper, will also bring together sculptures, prints, media art and mixed-media installations. Ranging in scale from 3 inches to nearly 40 feet, and featuring art from 1796 to today, the exhibition presents around 50 unique objects. “Black Out: Silhouettes Then and Now” is curated by Asma Naeem, the Portrait Gallery’s curator of prints, drawings and media arts, and will be on view through March 10, 2019. A press preview with Naeem will take place Thursday, May 10, from 10 to 11:30 a.m. A public talk with featured contemporary artist Camille Utterback will follow Saturday, May 12, at 2 p.m.

The “Then” portion of the exhibition will focus on those who have been previously “blacked out” in historical narratives by presenting silhouettes of same-sex couples, cooks, activist women, enslaved individuals and disability pioneers. Also on view will be some of the earliest examples of American portraiture by artisans who were otherwise powerless, including those who had been enslaved, such as Moses Williams, or those who were physically challenged, such as Martha Ann Honeywell who cut silhouettes using her mouth. The “Now” portion of “Black Out” explores how today silhouettes are no less ubiquitous and can be seen on everything from book illustrations and commercial advertising to the profiles people create on smartphones. Organized into four large, gallery-sized installations, artwork by leading contemporary women artists take the silhouette form to new heights.

“With both historical and contemporary explorations into the form of silhouette, ‘Black Out’ reveals new pathways between past and present, particularly with regard to how we can reassess notions of race, power, individualism and, even, the digital self,” Naeem said. “‘Black Out’ unpacks the art of silhouettes as a potent art form, revealing the paradoxes of a country roiling with ideals of freedom and the trauma of slavery in the 1800s and the messiness of our modern lives.”

The historical section of the exhibition will display works by Auguste Edouart and William Bache, two of the most well-known silhouette artists of their time. Edouart hand cut more than 3,800 silhouette portraits in America, only seven of which are known to be of enslaved persons. “Black Out” will present two of these portraits—the first showing of these works by a major institution. The exhibition will also present Edouart’s portrait of John Quincy Adams from the Portrait Gallery’s extensive holdings of Edouart’s silhouettes. “Black Out” will feature a rare gem, a life-size profile of a 19-year-old enslaved woman named Flora, whose silhouette was discovered with an original bill of sale from 1796, wherein she was sold for 25 pounds sterling. This work is one of the few known portraits of an enslaved person from the 18th century in institutional hands in the U.S. The Portrait Gallery has recently conserved this extraordinary portrait.

In its more liberalizing form, “Black Out” will showcase the boundary-breaking history of silhouettes, including a creamware jug featuring a portrait of the first African American Episcopal priest, Absalom Jones; the earliest-known likeness of a same-sex couple, a double silhouette of Sylvia Drake and Charity Bryant from c. 1805–15; and a silhouette album by Bache from the first decade of the 19th century. Visitors will have the opportunity to scroll through digital pages of the Bache album to see such subjects as George and Martha Washington, along with many everyday New Orleans citizens.

Showcasing the relevance of silhouettes today, “Black Out” will include large installations by four contemporary women artists who explore issues of slavery, gender, modern alienation and people’s relationship with technology. Renowned artist Kara Walker will exhibit two of her panoramic wall murals of often graphic and nightmarish scenes of plantation life, along with an equally disturbing metal miniaturized playset. MacArthur “Genius” Fellow and Stanford University professor Camille Utterback uses coding and computer software to create an interactive digital work that reacts to visitors’ shadows and movements, all in an effort to reemphasize people’s physicality in this virtual age. Also on view will be an 18-foot-tall installation by Canadian artist Kristi Malakoff featuring life-size cut-outs of children dancing playfully around a Maypole, a seemingly three-dimensional appropriation of silhouettes. The fourth gallery will feature work by New York-based artist Kumi Yamashita (a finalist of the Portrait Gallery’s 2013 Outwin Boochever Portrait Competition), who “sculpts” light and shadow with objects to create mixed-media profiles of people who are not there. In “Origami,” Yamashita creases the edges of origami squares so precisely as to create each sitter’s distinct profile in shadow.

A scholarly catalog produced by the Portrait Gallery and Princeton University Press will accompany the exhibition. “Black Out: Then and Now” is the first major publication to focus on the development of silhouettes and gathers leading experts to shed light on the surprisingly complex historical, political and social underpinnings of this ostensibly simplistic art form. This richly illustrated volume explores likenesses of everyone from presidents and celebrities to everyday citizens and enslaved people, and reveals how silhouettes registered the paradoxes of the unstable young nation, roiling with tensions over slavery and political independence. Beginning in May, the book will be available for purchase at the National Portrait Gallery store and online.

“Black Out: Silhouettes Then and Now” has been made possible through the support of its leadership committee: The Carl & Marilynn Thoma Art Foundation, Andrew Oliver Jr. and Daniel Oliver, Paul and Rose Carter, The Richard and Elizabeth Dubin Family Foundation, Glen and Sakie Fukushima, Stephanie and Timothy Ingrassia, Philip and Elizabeth Ryan, The Abraham and Virginia Weiss Charitable Trust and Amy and Marc Meadows. Additional support provided by the American Portrait Gala Endowment.

The Smithsonian’s National Portrait Gallery tells the multifaceted story of the United States through the individuals who have shaped American culture. Spanning the visual arts, performing arts and new media, the Portrait Gallery portrays poets and presidents, visionaries and villains, actors and activists, whose lives tell the American story.