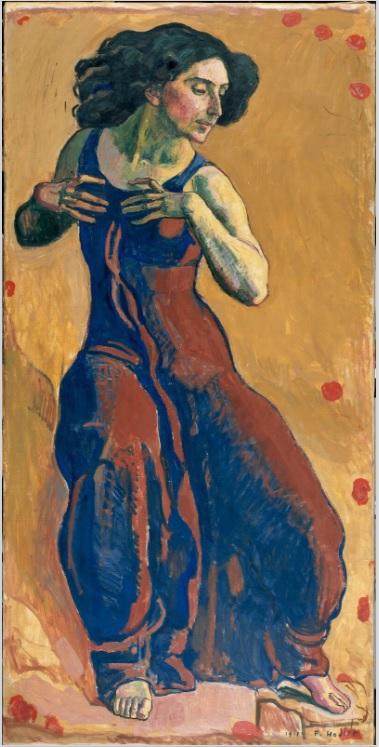 “Portraits of the World: Switzerland”

“Portraits of the World: Switzerland” is the inaugural exhibition in a series that will highlight the global context of American Portraiture. Each year, the Smithsonian’s National Portrait Gallery will showcase a portrait created by a foreign artist in an exhibition designed around that artwork. The featured work for this year’s exhibition is “Femme en Extase” (Woman in Ecstasy), a portrait of the Italian dancer Giulia Leonardi by the Swiss painter Ferdinand Hodler, on loan from the Museum of Art and History in Geneva. The exhibition will be on view from Dec. 15 through Nov. 12, 2018.

“Switzerland and the United States have historically had a close relationship, as borne out by the rather remarkable fact that in 1968 our so-called Sister Republic lent five American portraits to the National Portrait Gallery’s inaugural exhibition,” said Kim Sajet, the Portrait Gallery’s director. “Now, on the eve of celebrating the 50th anniversary of the museum’s public opening, we once again turn to our Swiss friends for a collaboration. This modest but extraordinary exhibition coincides with major Hodler retrospectives in Switzerland, Germany and Austria, all of which are commemorating the centennial of the artist’s death.”

Hodler’s experimentation with the abstract elements of color, line and expression created a vibrant new mode of Swiss art at the dawn of the 20th century. “Femme en Extase,” painted in 1911, embodies the Swiss modernist approach to expressing emotion through body movement and aligns with the theory known as eurhythmics, which had an international impact and transformed dance in the United States at the turn of the 20th century. The portrait will be complemented by a selection of works from the Portrait Gallery’s collection representing American dancers who were influenced by eurhythmics, notably Isadora Duncan, Martha Graham, Doris Humphrey, Ted Shawn and Ruth St. Denis. Artworks featured in the exhibition will range from an 1897 chromolithograph of the American dancer Loïe Fuller, by Jules Cheret, to a 1938 gelatin silver print of Doris Humphrey, by dance photographer Barbara Morgan.

Martin Dahinden, Ambassador of Switzerland to the United States and, together with his wife Anita, chairman of the museum’s Diplomatic Cabinet said, “We are honored that one of Switzerland’s most celebrated painters, Ferdinand Hodler, was chosen by the National Portrait Gallery as the inaugural focus of its new “Portraits of the World” series. It shows how much we both value our longstanding relationship which spans back to the museum’s opening. We place such collaborations at the core of our diplomatic work, as they allow us to build bridges to our host country and its culture, to nurture synergies and to understand each other even better.”

The “Portraits of the World” exhibition series is curated by Robyn Asleson, assistant curator of prints, drawings and media arts at the Portrait Gallery. A special tour with the curator will take place Sunday, Dec. 17, at 3 p.m.

The Smithsonian’s National Portrait Gallery tells the multifaceted story of the United States through the individuals who have shaped American culture. Spanning the visual arts, performing arts and new media, the Portrait Gallery portrays poets and presidents, visionaries and villains, actors and activists whose lives tell the American story.