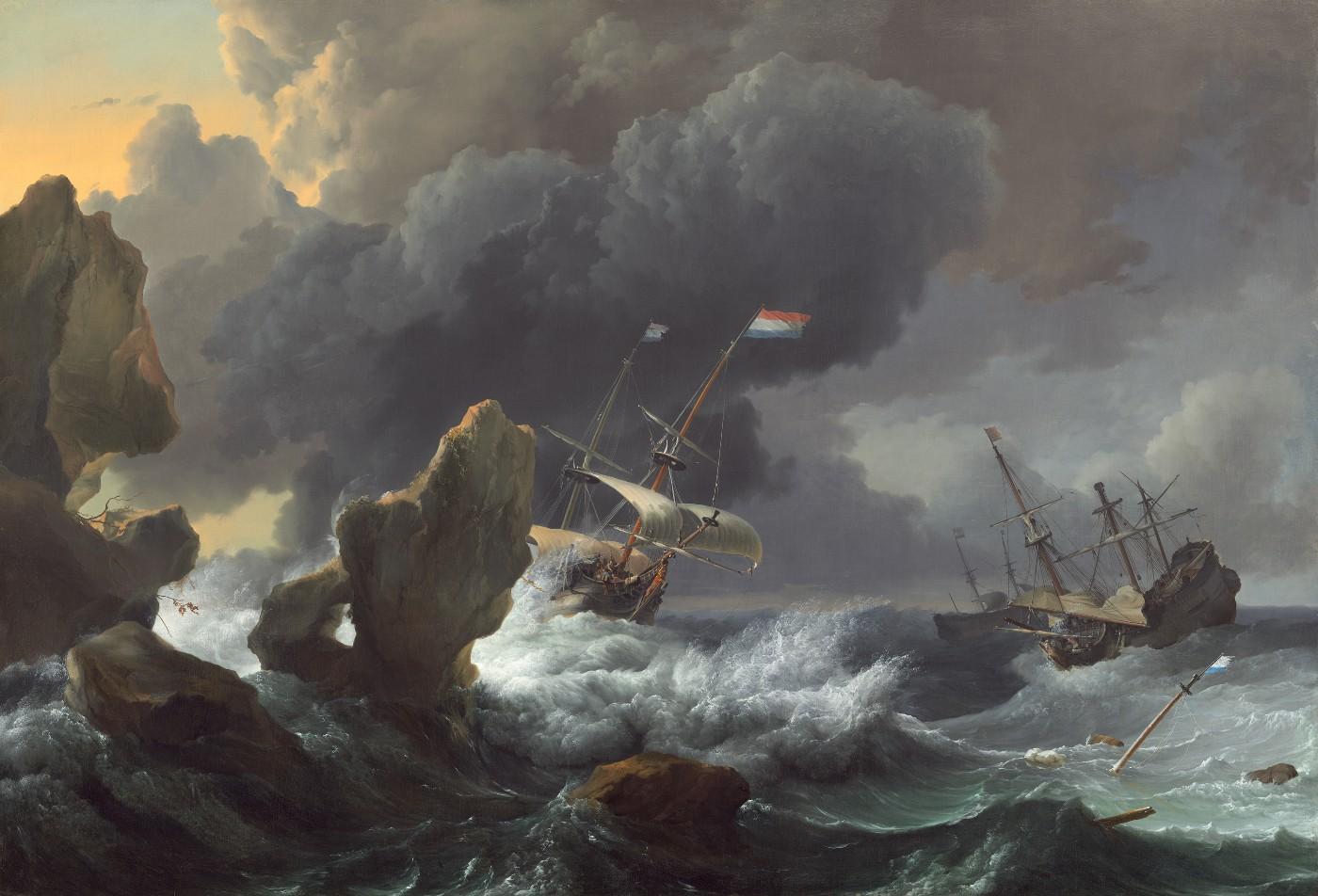 Washington, DC—During the 17th century, the Dutch were a nation of merchants, engineers, sailors, and skaters. Water was central to their economic prosperity and naval prowess, essential as a means of transportation, and popular as a site for recreation year-round. In a special exhibition at the National Gallery of Art, Washington, Water, Wind, and Waves: Marine Paintings from the Dutch Golden Age will explore the multifaceted relationship the Dutch had with water during their Golden Age. On view from July 1 through November 25, 2018, in the West Building, the exhibition features some 45 paintings, drawings, prints, rare books, and ship models drawn largely from the Gallery's outstanding collection of Dutch art, with highlights by artists including Jan van Goyen, Aelbert Cuyp, Rembrandt van Rijn, and Willem van de Velde the Younger.

Demonstrating the various roles water played in Dutch daily life, images range from quiet harbor vistas to stormy seascapes, wintry skating scenes to summery water views. In addition to a selection of loans from several private collectors and a public museum, the exhibition will also present a number of works from the Corcoran Collection.

"Much as the Gallery's recent exhibitions Drawings for Paintings and Vermeer and the Masters of Genre Painting expanded our understanding of the network of Golden Age painters and their processes, Water, Wind, and Waves provides a broader picture of Dutch society at the time," said Earl A. Powell III, director, National Gallery of Art, Washington. "The exhibition expands the definition of marine paintings to fully consider the variety of ways in which the Dutch relationship with water was manifested in the visual arts. We are grateful to the private and public collections for their generous loans, to the Hata Foundation for making this exhibition possible, and to The Exhibition Circle for their additional support."

The exhibition is generously supported by the Hata Foundation and The Exhibition Circle of the National Gallery of Art.

Today, some 400 years after the works in Water, Wind, and Waves were created, water endures as a defining feature of Dutch society. Whether for innovations in the management of rising sea levels or the charming allure of its canals, the country is known for its strong relationship to the North Sea and the world's oceans, and to its network of rivers, canals, and waterways. This lasting visual identity originated in the 17th century when the Dutch Republic emerged as a great sea power following the founding of the Dutch East India Company in 1602 and West India Company in 1621 and naval successes against the Spanish and English.

Artists like Hendrick Vroom (1566–1640) capitalized on a growing audience for maritime scenes to create some of the earliest Dutch examples, including A Fleet at Sea (c. 1614). Drawing on his firsthand knowledge of naval architecture after years spent traveling by sea, Vroom captured a majestic 24-gun Dutch warship traveling through a harbor alongside coastal fishing and cargo boats. Later in the century, naval battles continued to be a popular subject, particularly while the Dutch were engaged in several wars with England in the 1650s and 1660s. In addition to their general maritime scenes, artists such as Willem van de Velde the Younger occasionally created large works commemorating specific battles. Van de Velde's The Dutch Fleet Assembling before the Four Days' Battle of 11-14 June 1966, with the 'Liefde' and the 'Gouden Leeuwen' in the Foreground (1670) shows two famed ships of the Amsterdam Admiralty—at left the Liefde (Love), a 70-cannon man-of-war ship, and at right the Gouden Leeuwen (Golden Lions), identifiable by the two back-to-back lions on its stern.

The enthusiasm for marine imagery subjects also found expression in ship models. The Dutch ship building industry was unparalleled in Europe, both in size and in expertise. Ship models, which were manufactured by the same hands that produced largescale ships and sometimes reproduced actual ships, were valuable as both documents of Dutch naval architecture as well as finely crafted objects for display. The late-17th century model of a Dutch state yacht was likely created for an individual associated with the Admiralty of Zeeland, the southernmost coastal province of the Netherlands. The roundels on the model's stern depict the Zeeland arms as well as the red castle of Aardenburg, perhaps suggesting that the owner lived in that small coastal town.

Much as the admiralties, magistrates, and municipal organizations sought paintings representing their naval successes, investors in the Dutch East and West India Companies were drawn to scenes representing the maritime commerce that brought them their economic success. Works like Abraham de Verwer's View of Hoorn (c. 1650) captured both the beauty and activities of ports and harbors. Set in the Zuiderzee, the large inlet of the North Sea, the painting shows a group of sailors aboard a large sailing ship (fluit) raising cargo brought by a smaller boat (wijdschip). The low vantage point from the water looking back at the city provides a full view of the many masts docked at the busy harbor.

Water, Wind, and Waves also considers how water was a source of many favorite pastimes. In works like Rembrandt's etching The Bathers (1651), men are seen finding respite from the heat in an isolated pond on a hot summer's day. Especially popular during the first half of the century—which experienced some of the severest winters of the so-called Little Ice Age—were scenes of people of all ages and classes skating, playing kolf, ice fishing, transporting goods, and traveling with horse-drawn sleighs, as in Hendrick Avercamp's Winter Games on the Frozen River Ijssel (c. 1626) and Adam van Breen's Skating on the Frozen Amstel River (1611).

In addition to their role as sites for leisure activities, inland waterways and canals were a vital—and efficient—means of transportation across the republic. As a result of unparalleled infrastructure, travel between cities took at most a couple of hours. Perhaps not surprisingly, ferryboats became a popular feature of marine subjects, favored by Dutch painters like Salomon van Ruysdael, whose River Landscape with Ferry (1649) shows all sorts of passengers (including horses) being carried across the water. Jan van Goyen's View of Dordrecht from the Dordtse Kil (1644) depicts a craft called a kaag ferrying passengers who have embarked and disembarked from smaller row boats.