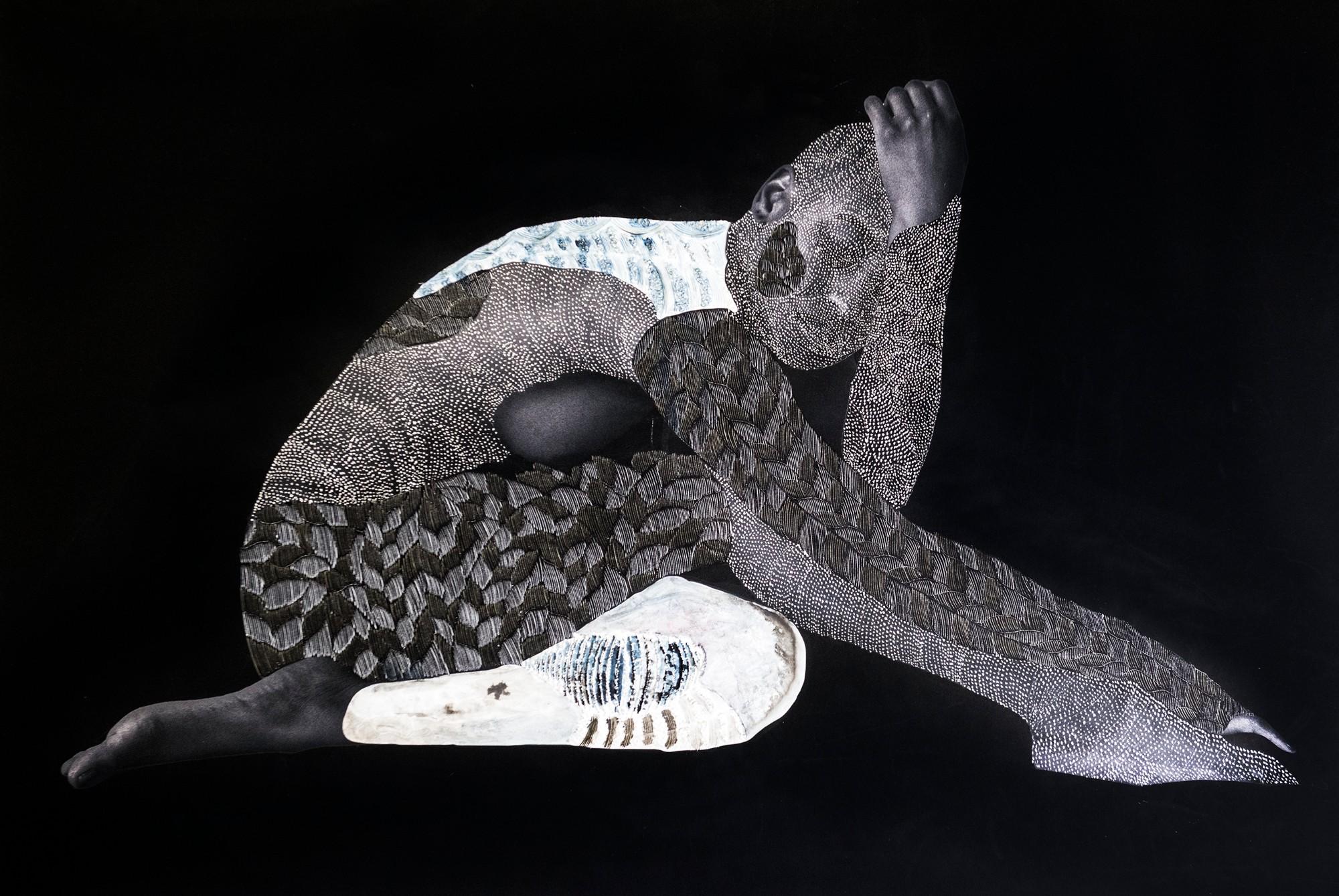 Image courtesy of the artist and Fridman Gallery

Combining elements of photography, sculpture, frottage, ink, and graphite drawings, Lewis’ intricately carved works on paper reflect his experience as a critical-care nurse and challenge perspectives on race and history. Treating the paper as an organism, he sculpts patterns and textures akin to cellular tissue and uncovers anatomies of photographed subjects. 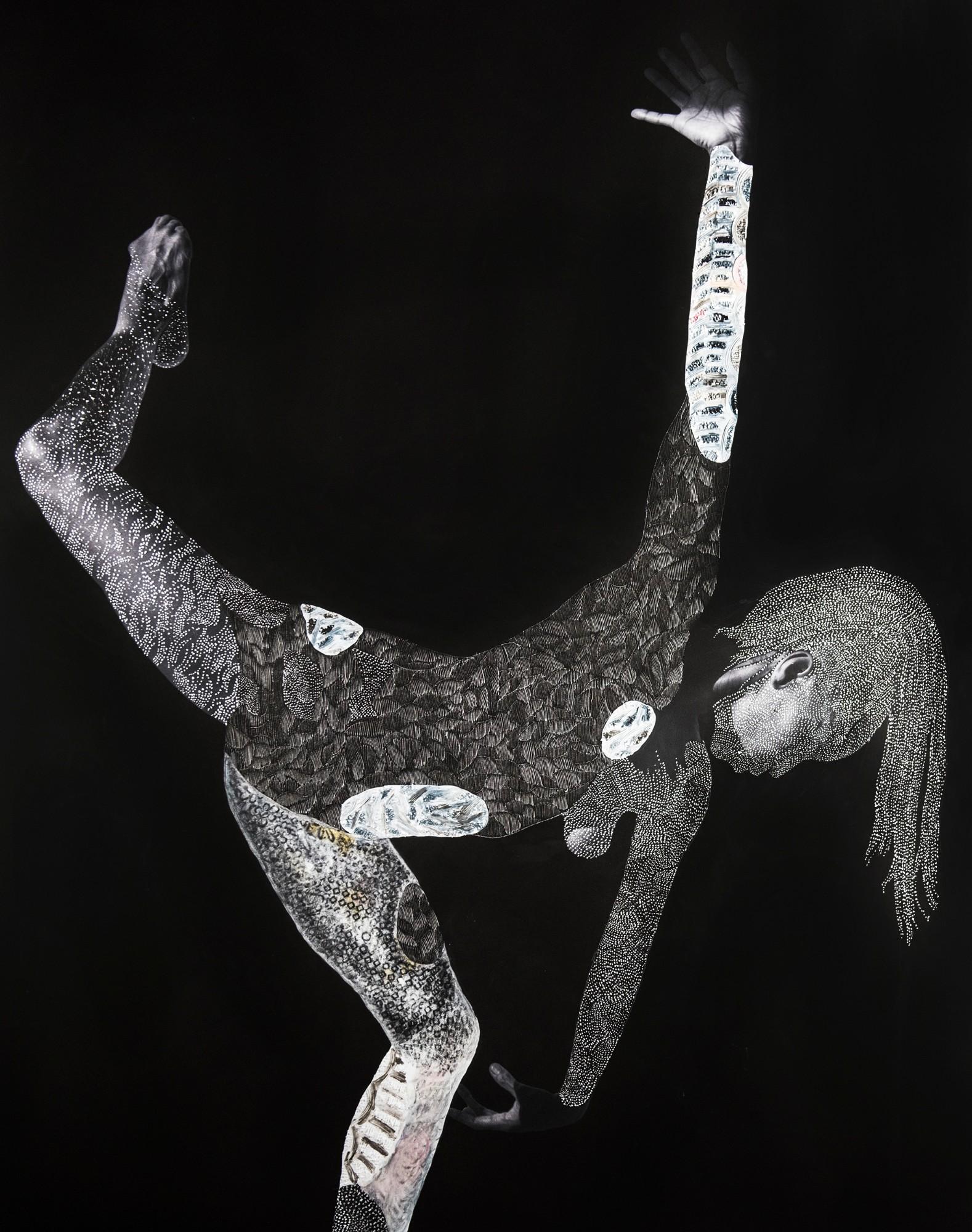 Courtesy of the artist and Fridman Gallery

“Interacting with images is an act of care,” Lewis said. “I explore and question the history of the subject, mirroring the abilities of diagnostic lenses in my own language of seeing and listening. The textures and patterns I create resonate with the rhythms and sounds I listen to.”

Latent Tapestries brings together Lewis’ application of medical diagnostics and its visual language; exploration of granularity of photographic images and paper; responses to the current political landscape; and the critical role of sound and music—specifically jazz—as a conduit in connecting shared histories and futures.

This exhibition includes new works in the ongoing Signaling series depicting black figures in motion; a new body of work, Probing the Land, an examination of Confederate monuments; street scenes from Trump’s campaign rallies and inauguration; and an early collage using electrocardiogram strips from patients he took care of.

To make the new series​ Probing the Land, Lewis photographed American monuments, including the controversial equestrian statues of Confederate officers lining Monument Avenue in Richmond, Virginia. Lewis carves into the image of the monument, destabilizes the bronze, creating a soft anatomy within, rendering the figure of the horse and the rider active, penetrable and vulnerable. The works attempt to capture the public’s passion and dialogue about the statues.

“Memories and truths are locked inside these monuments, as well as a spirit of discord,” Lewis explains. “The monuments, themselves, are symbols of differing views of what we celebrate or lament.”

Lewis explains how his experience of caring for patients influenced his work: “Output imagery of medical diagnostics is a unique language critical to understanding a patient’s condition, one of colors and patterns. Depicting the invisible by color and subtleties of shades and distinctions in shapes, shifts, clarities, rhythms, and textures can indicate the potential for change. Likewise, discerning slight changes in diagnostic sounds, those of lungs, heart, pulse, and intestines is also critical. These nuanced ways of looking at and listening to a body, profoundly influenced how I see, hear, and understand the world.”

The work in the exhibition will be included in an illustrated catalogue with an introductory essay by cultural anthropologist and curator Niama Safia Sandy. 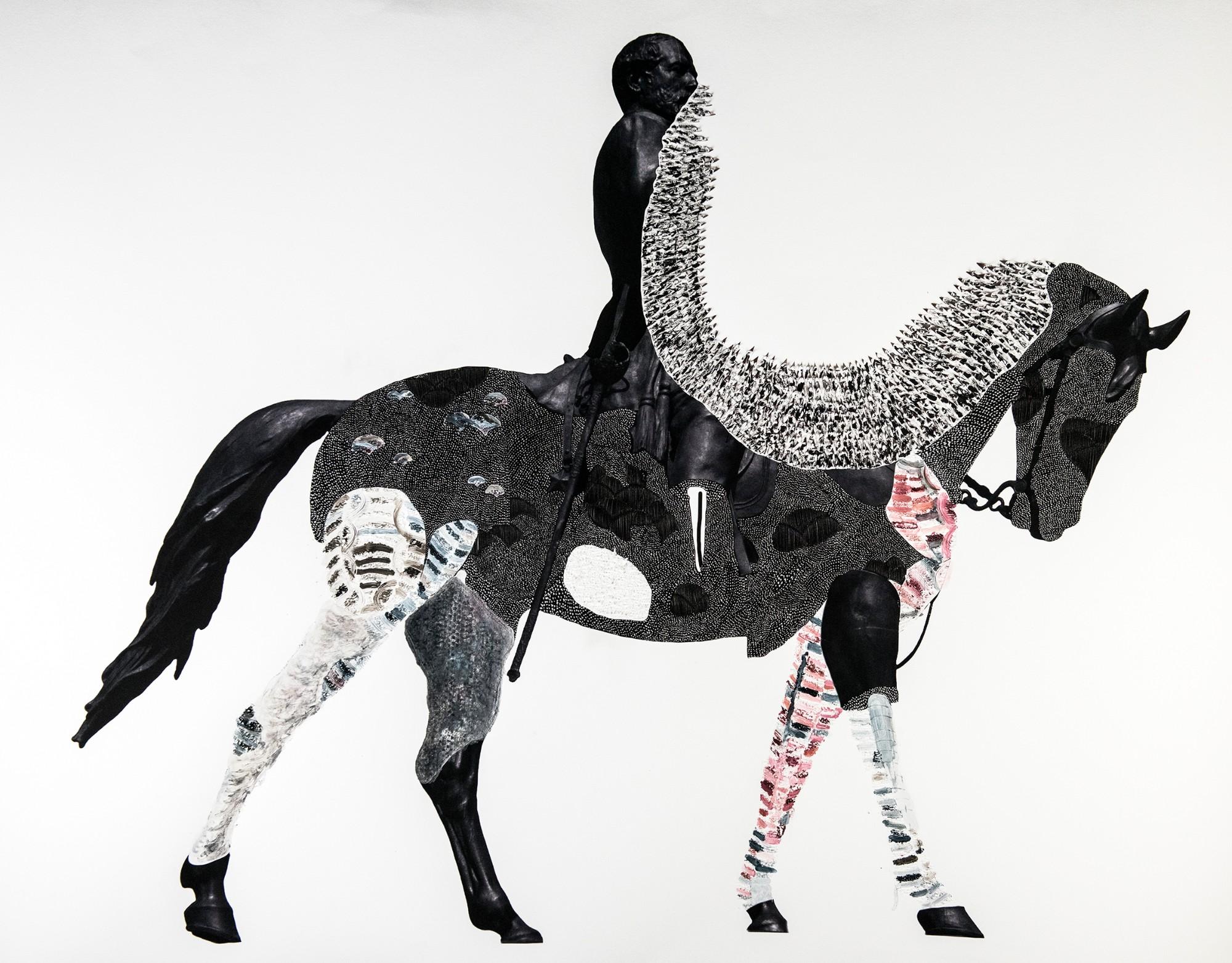 Image courtesy of the artist and Fridman Gallery

About Nate Lewis
Nate Lewis (b. 1985, Beaver Falls, PA)​ explores history through patterns, textures, and rhythm, creating meditations of celebration and lamentations. He​ earned a Bachelor’s Degree in Nursing from VCU, and practiced critical-care nursing in DC-area hospitals for nine years. Lewis’ first artistic pursuit was playing the violin in 2008, followed by drawing in 2010. Since 2017 he has lived and worked in New York City. Lewis’ work has been exhibited in Plumb Line: Charles White and the Contemporary at The California African American Museum, The Studio Museum in Harlem, The Yale Center for British Art, 21c Museum Hotels, The Armory Show, Paris Photo, Expo Chicago, Art Untitled Miami Beach, and is currently in Men of Change: Power, Triumph, Truth, touring with the Smithsonian Institution Traveling Exhibition Services. Past residencies include Pioneer Works and Dieu Donne. Lewis’ work is in the public collections of the Baltimore Museum of Art, The Blanton Museum, The Studio Museum in Harlem, Grinnell College Museum of Art, and 21c Museum Hotels. He has lectured at Yale University as part of Claudia Rankine’s Racial Imaginary Institute, the Yale Center for British Art, and Paris Photo.

About Fridman Gallery
Founded in 2013, Fridman Gallery represents contemporary artists from around the world, featuring avant-garde exhibitions and performances in a variety of media, including visual and sound art.