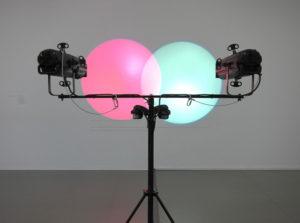 Amalia Pica, Venn Diagram (Under the Spotlight), 2011. Promised gift of Patricia Cisneros through the Latin American and Caribbean fund.

While the core modern gift donated last year is renowned for its focus on geometric abstraction, this contemporary gift reflects a more recent shift by Latin American artists toward video, performance, photography, and more participatory forms of art. These new additions to the collection establish an important dialogue between an emerging generation of artists and the Museum’s outstanding holdings of Latin American works in photography, media and performance, and Conceptual art from the 1960s and 1970s.

A digital exhibition that presents a selection of the extraordinary artworks that have been given by Patricia Phelps de Cisneros, animated by the reflections of 16 MoMA curators can be found at: mo.ma/cisneros