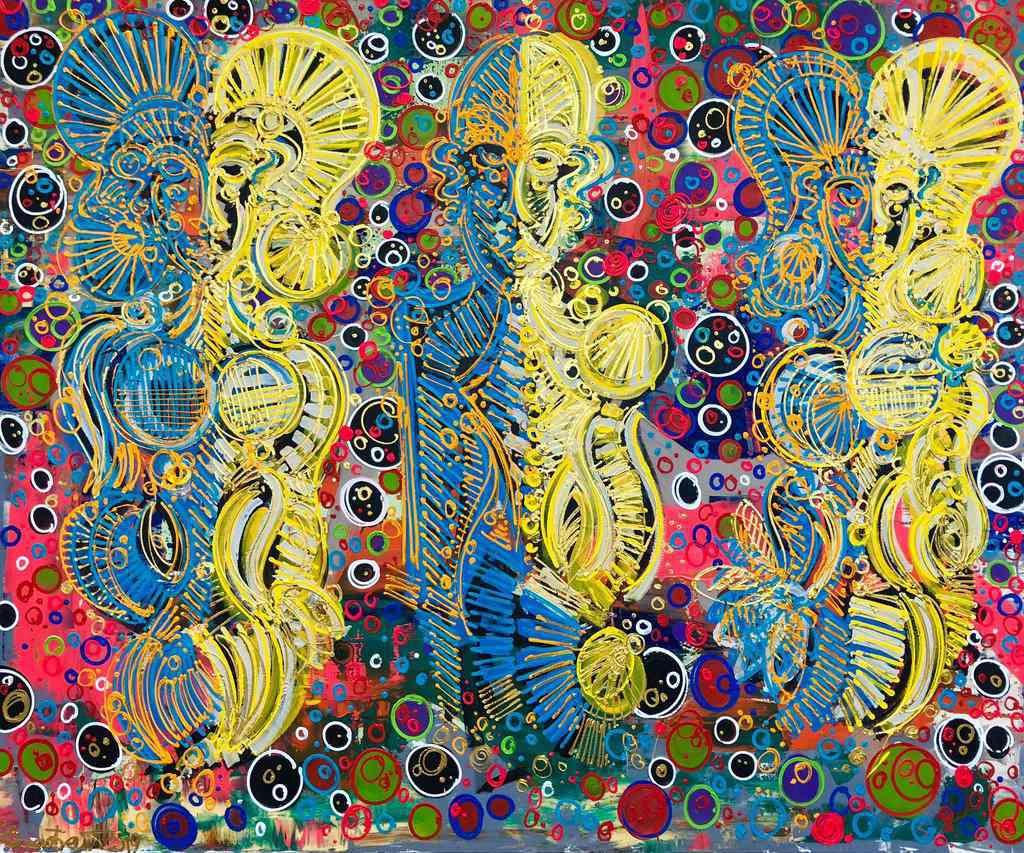 After much historical debate, we have decided that size really does matter—as with size comes impact! For the first time seen on this level and amalgamation, this grand display of monumental works installed includes paintings, sculpture, and works on paper from eleven top international artists: Pier Paolo Calzolari, Larry Poons, Joyce Pensato, Frank Stella, Andy Warhol, Keith Haring, Pruitt + Early, Mimmo Rotella, Julian Schnabel, Leon Löwentraut and Miranda Pissarides. Each artist embodies a unique style, sensibility, and set of influences, yet together these artists working on a large scale prove the impact and strength of monumental artworks. 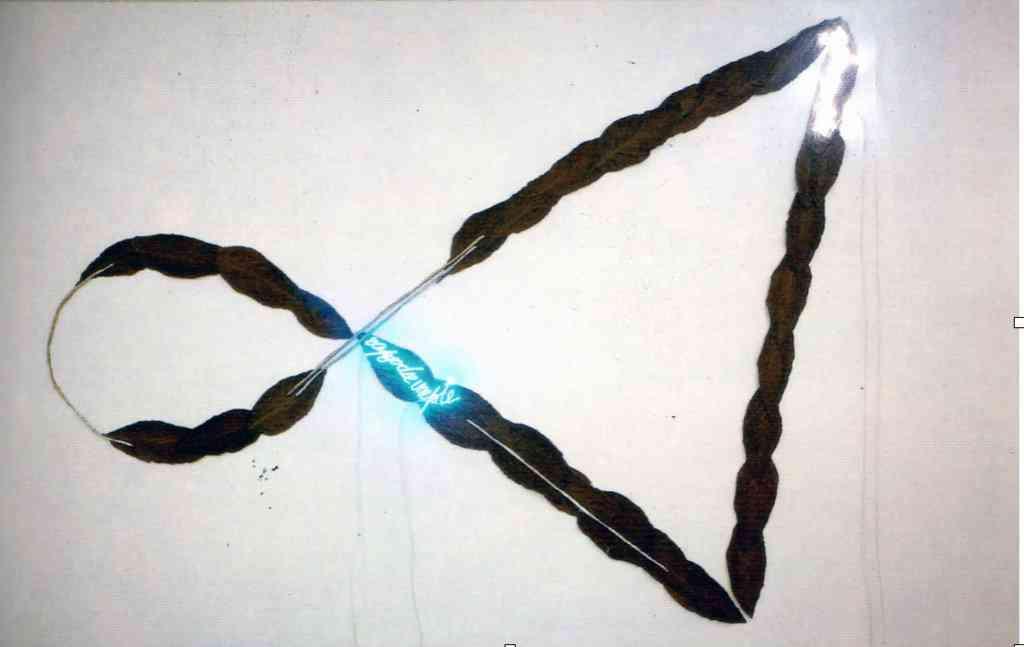 Neons, leather, tobacco leaves, wires: these are materials–both ordinary and unconventional–used by revered artist, Pier Paolo Calzolari, one of the leading figures of the Arte Povera movement. Combining these raw materials in large scale hanging sculptures such as Rapsodie Inepte and Five Neons, the artist explores the transformation of ordinary materials and the essential fragility of objects.

Larry Poons has re-emerged today as one of the most exciting artists grounded in Color Field painting and Abstract Expressionism. Two monumental paintings, Shores of Orion and Leaving Chords, draw in the viewer from afar with their impressive scale and hypnotically muted color palettes. Approaching Poons' paintings for a closer look, however, one can see the way in which each of his vivid brushstrokes works together with the rest to create an almost musical visual experience, typical of Poons' work. 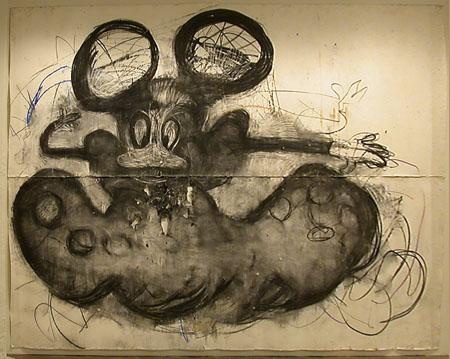 Joyce Pensato, Donald as a Crossdresser, 1999

The Brooklyn-based artist Joyce Pensato explores and distorts popular culture through the alteration and mutilation of iconic cartoon characters like Mickey Mouse, Donald Duck and Homer Simpson. Donald as a Crossdresser is the artist's large-scale charcoal drawing in the mode Pensato is famous for, turning the anodyne cartoon into something eerie and emotionally resonant. When the New York Times asked her about the significance of the scale of her works, Pensato replied: "As I get older and shorter, I'm thinking bigger."

Frank Stella first earned acclaim for his smooth and crisp canvases, seen as a groundbreaking reaction to the textural impastos of Abstract Expressionism, but in the 1980s, he moved away from the limited medium of flat canvas to explore three-dimensionality with sculptural forms built from cones, pillars, and curves. Guifà e la Beretta Rossa and La Scienza della Fiacca are both pivotal examples of the artist's experiment with the three-dimensional grand scale work now referred to as wall sculptures.

Andy Warhol's (1928–1987) striking Mao screenprint series was sparked by a claim he read in Life magazine that Mao Zedong was the most famous person in the world. The series combines two quintessentially Warhol themes: the magnetic pull of fame and the bizarre language of advertising. The creation of a glammed-up iconic image of Mao transforms a mysterious and intimidating image of Communist propaganda into a glamorous Western pop icon, embodying absolute political and cultural power. This large-scale series demonstrates the impact of repetition–so dear to Warhol–and creates a powerful impression due to its size.

Keith Haring's (1958–1990) fascination with babies and pregnant women is a key element in his work, and one of his most captivating explorations of this theme comes with a 1983 silkscreen series where Herring uses his signature bright color palette to depict pregnant women dancing a sort of African fertility dance. The works are a stunning tribute to womanhood, and Size Matters presents a rare opportunity to see the whole series together.

It Ain't No Fairy Tale marks the pinnacle of the Pruitt + Early collaboration. It was first exhibited in the controversial "Red, Black, Green, Red, White and Blue" show at the Leo Castelli Gallery in 1992. The exhibition was the duo's "take on black pop culture in America, a historical survey, images that had risen to the top of American culture that created a rich, popular identity of what the black experience had been through adversity." However, some people voiced concern at an exhibition about black America created by Rob Pruitt and Jack Early, two young white men. This monumental work was shown seventeen years later in 2009 at Tate Modern, re-enacting the show in an entire room as part of its major exhibition, Pop Life: Art in a Material World, which explored the links between the New York art scene and the Young British Artists. 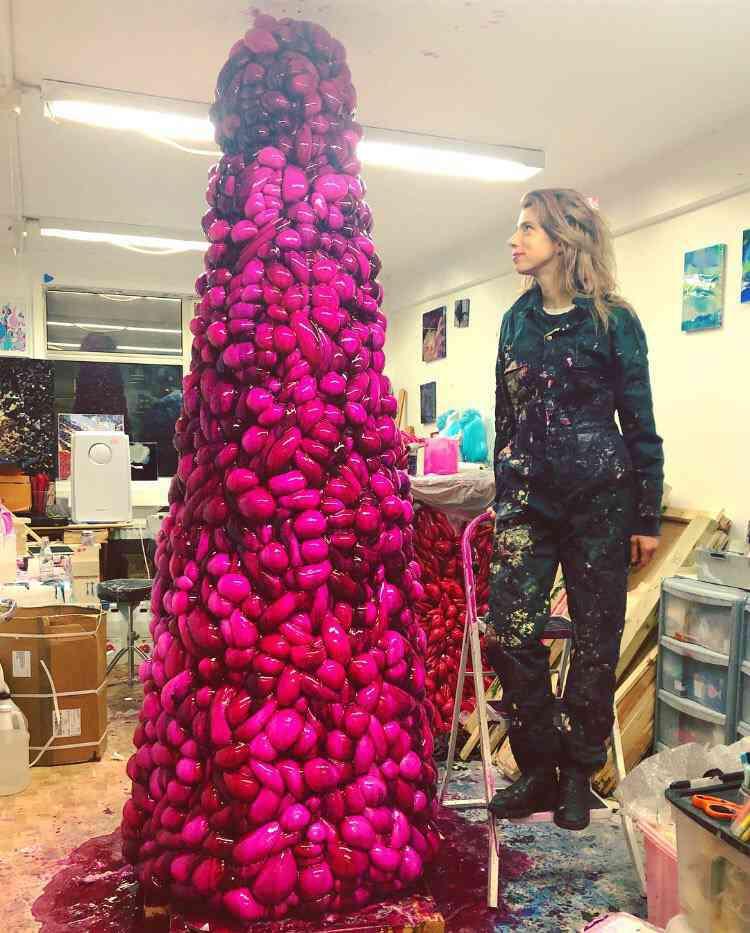 Mimmo Rotella (1918–2006), oft referred to as a Nouveau Realiste, was known and revered for his pioneering work focusing on social and political commentary. His early abstractions moved quickly to pop-art and later evolved into the décollage and poster works he became known for. The work exhibited, Due per la Strada, was executed in 2003 and is a decollage on canvas. National Gallery of Modern and Contemporary Art, Rome celebrated Rotella's 100 year anniversary this winter with an extensive exhibition, Mimmo Rotella Manifesto, curated by Germano Celano and Antonella Soldaini.

Julian Schnabel, the art-star who took the art world by storm in the 1980s continues to work prolifically and successfully crossing the boundaries of art and film. Throughout his career, even as an accomplished filmmaker, his work is gutsy and expressive, and his use of materials are tactile and rich. A large-scale untitled painting from 1982, the peak of his career, will be shown.

In support of young artists, we have included 2 artists in the exhibition who we believe worthy of being included with the substantially more known artists in the group. Dubbed the "Wunderkind" of the art world by the press, the 21-year-old Düsseldorf-based artist Leon Löwentraut first exhibited his work professionally at the age of 15. Influenced by Picasso and Basquiat, Löwentraut's use of bright colors in thick swathes across the canvas startle the viewer with their fierceness, and the simple, resonant images they collide to form leave a lasting impression. His epic scale painting [TITLE] connects with the rock star within.

Winner of the Saatchi Young Artist Prize in 2018, Miranda Pissarides creates work fixated on dualities and the spaces in between them. She works in both the fields of painting and sculpture, with each practice informing the other--her paintings have the depth and weight of sculpture, while her sculptures have the ethereal and fluid qualities of painting. In the large-scale sculpture, entitled Violet, Pissarides used raw pigments to convey the conflicting feelings of desire and repulsion. The use of resin blended into this monumental stalagmite creates an effect of liminality, a substance that seems to exist between the states of solid and liquid.

SIZE MATTERS will be on view at Plutschow Gallery, Waldmannstrasse 6, Zurich from April 11th— July 15th, 2019