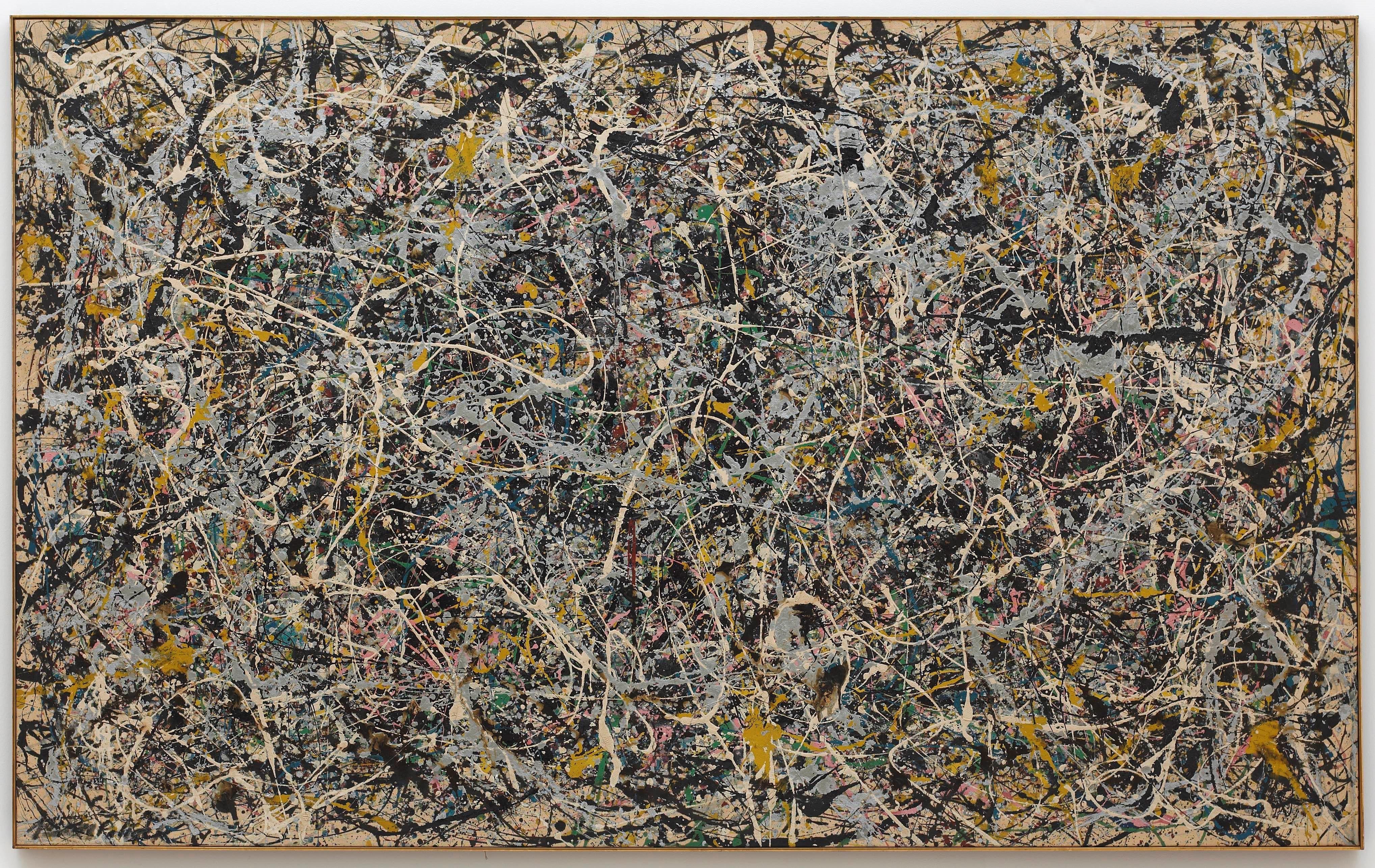 LOS ANGELES—This spring The Museum of Contemporary Art, Los Angeles (MOCA), will conduct a thorough conservation of Jackson Pollock’s abstract expressionist painting Number 1, 1949 (1949), a treasure of MOCA’s collection since it was donated to the museum in 1989 by Rita Schreiber in loving memory of her husband, Taft Schreiber. Over the course of six months, the painting will undergo a significant conservation treatment, to be conducted publicly in MOCA’s Grand Avenue galleries. Working in collaboration with the Getty Conservation Institute (GCI), a paintings conservator will work on-site to clean the surface of the painting, revealing brighter whites, more brilliant metallics, and a cleaner canvas, ultimately allowing viewers to see the painting in a condition much closer to how it appeared originally. On select dates, the conservator will perform the conservation treatment during open hours, answering questions from the public about the protocols and processes of modern art conservation. Three works by Pollock from MOCA’s permanent collection, dating from 1943 to 1951, will also be on view, exemplifying a range of materials from watercolor to collage. Additionally, the exhibition will also include photographic and video documentation of Pollock’s iconic method of pouring paint from cans and flinging it from the tips of sticks and brushes onto unstretched canvasses on his studio floor.

“As stewards of one of the most important collections of postwar art, we are thrilled to be able to do this work on Pollock’s Number 1, 1949,” says MOCA’s Maurice Marciano Director, Philippe Vergne. “And to be able to lift the veil on this kind of work and open it up to the public is even more meaningful. We are lucky and grateful to work with the GCI on this and preserve this important painting for generations to come.”

Cleaning a Pollock painting requires specific expertise in the conservation of modern paintings. Unlike older paintings, modern paintings are typically not protected by a surface layer of varnish. They are often comprised by retail trade paints (house paints, industrial enamels, and aluminum paints), and other nontraditional materials instead of artist-quality oils. They also often contain areas of uncovered, unprimed canvasses, exposing the raw fabric support to stains and discolorations. Having the conservator clean the painting in public view, rather than work in a traditional lab, allows viewers insight into just one of the activities that go into the lifetime care of the museum’s permanent collection. Preserving the more than seven thousand artworks in MOCA’s collection for future generations also involves maintenance—whether humidity regulation, light protection, pest control, or security measures. The museum welcomes the public to take a look at one of the ways the institution commits to presenting, collecting, and interpreting the art of its time.

“It’s a wonderful moment in this long-term research project to move away from the lab and into the phase when we start to use some of these fully tested cleaning systems for modern painted surfaces on actual works of art,” said Tom Learner, Head of Science at the Getty Conservation Institute. “And what better painting for us to do this with than Jackson Pollock’s Number 1, 1949, one of the gems in MOCA’s collection.”

The GCI’s Modern Paints project—now part of its broader Modern and Contemporary Art Research Initiative—has, over the past ten years, improved analytical methods for identifying paint types and the understanding of how they perform and how best to conserve them. In particular, it has made great advances in introducing new systems for cleaning modern paintings and is now disseminating these to professionals via publications, workshops, and case studies.

“We are gratified that the results of our multiyear research project into the properties and conservation of modern paints is able to benefit this remarkable painting here in Los Angeles,” says Tim Whalen, John E. and Louise Bryson Director of the Getty Conservation Institute. “I am grateful to the members of the GCI Council, whose generosity has supported not only the Modern Paints research initiative but the treatment of Jackson Pollock’s Number 1, 1949.”

The conservator will be at MOCA Grand Avenue for Q&A sessions with the public on select Thursdays from 11:30am-12:00pm and 5:30-6:00pm. Please check moca.org for details on related programming.

Jackson Pollock (b. 1912, Cody, Wyoming; d. 1956, Long Island, New York) was an American painter internationally known for his iconic abstract expressionist paintings. In 1930 he moved from Los Angeles to New York and studied drawing and painting with Thomas Hart Benton at the Art Students League; during the 1930s Pollock became involved in the Works Progress Administration’s Federal Art Project (WPA/FAP) and served as an assistant to the Mexican muralist David Alfaro Siqueiros. Pollock had his first solo show at Peggy Guggenheim’s Art of This Century Gallery in New York in 1943, and by 1947 he had inaugurated a new type of abstraction with his drip paintings. Pollock’s artworks are housed in world-renowned institutions including the Museum of Fine Arts, Boston; the Metropolitan Museum of Art, New York; the Museum of Modern Art, New York; the Solomon R. Guggenheim Museum, New York; the National Gallery of Art, Washington, DC; the Philadelphia Museum of Art; the Dallas Museum of Art; the San Francisco Museum of Modern Art; Tate Modern, London; Centre Georges Pompidou, Paris; and the National Gallery of Australia.

Jackson Pollock’s Number 1, 1949: A Conservation Treatment is organized by The Museum of Contemporary Art, Los Angeles, in collaboration with The Getty Conservation Institute.

The Getty Conservation Institute (GCI) works internationally to advance conservation practice in the visual arts—broadly interpreted to include objects, collections, architecture, and sites. The Institute serves the conservation community through scientific research, education and training, field projects, and the dissemination of information. In all its endeavors, the GCI creates and delivers knowledge that contributes to the conservation of the world’s cultural heritage.