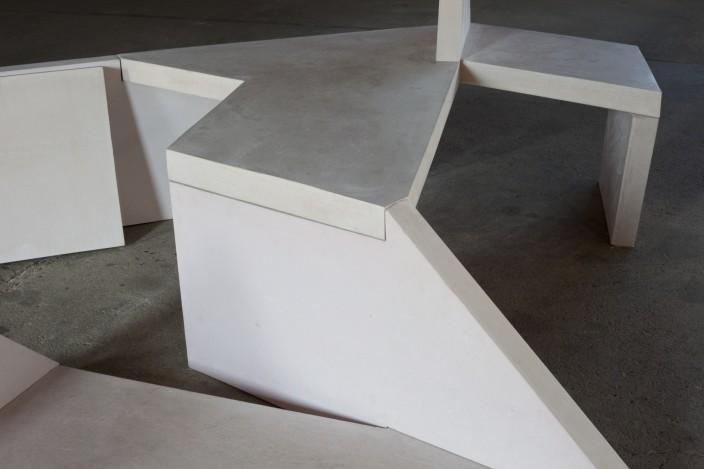 As a sculptor, performer, and writer, Gordon Hall examines the personal, relational, and political effects of the ways we relate to objects and to each other. Using both abstract forms and re-constructed copies of found objects, the artist asks how we might use such things and how they solicit bodily engagements from us. Ultimately, Hall’s interests lie in the social and political dynamics of these engagements. The intentional, specific, and enigmatic objects Hall creates are both provocations to performance and allegories for an ethics of relationality. The sculptural objects and the performances that occur with and adjacent to them explore possibilities for an engagement with space, time, and objecthood that seek to model alternative futures.

"The Number of Inches Between Them," a project that includes two sculptural works on view at the List Center, continues a body of work in which Hall creates replicas of found, one-of-a-kind pieces of furniture. The replicas refer to objects Hall has encountered by chance and feels a magnetic attraction to, furniture that the artist wants to investigate physically through remaking. The Number of Inches Between Them doubles a geometric stone bench happened upon in a friend’s backyard in 2016. The replication is done twice: first as eight cast concrete interlocking panels that are shown assembled as a twin of the bench, and second as the same set of eight concrete panels presented disassembled and leaning against the walls of the gallery. All aspects of the object—its design, tactile quality, material, history, and the narrative of its maker—become implicated in the ways Hall reanimates it in a second life as sculpture. In particular, the artist recovers the story of the bench’s creator Dennis Croteau, a largely unknown artist who designed and fabricated the original bench shortly before passing away from complications relating to AIDS in 1989. A silent movement piece instigated by and incorporating the bench will be performed by Hall and a group of Boston-based performers. The performance will take place on Saturday, April 28, at 3pm in the Bakalar Gallery at the MIT List Visual Arts Center, 20 Ames Street, Cambridge, Massachusetts.

The title "The Number of Inches Between Them" originates from a quote by Scott Burton, an artist who rose to prominence in the 1980s, recognized primarily for complicating the distinctions between sculpture and furniture. His granite and bronze furniture pieces are now included in major public art collections around the world. Here at MIT, Burton designed the settee, bench, and balustrade just outside of the Bakalar Gallery in the atrium of the List Center’s Wiesner Building. Burton, an advocate for making art personal and social, once said of the experience he desired for the audiences of his Behavior Tableaux works, “...what I want people to become aware of is the emotional nature of the number of inches between them." Like Croteau, Burton also passed away from AIDS-related complications in 1989. Hall’s work is in conversation with both artists and their lives in a broader social context—considering vulnerability and care, the broader history and politics of support and compassion, and the structures that dictate the choreography of our bodies’ as we engage with the built world.

Exhibitions at the List Center are made possible with the support of Fotene Demoulas & Tom Coté, Audrey & James Foster, Jane & Neil Pappalardo, Cynthia & John Reed, and Terry & Rick Stone. Additional support for List Projects: Gordon Hall has been provided by the Graham Foundation for Advanced Studies in the Fine Arts.

General operating support is provided by the Massachusetts Institute of Technology, the Council for the Arts at MIT, the Office of the Associate Provost at MIT, the MIT School of Architecture + Planning, the MassCultural Council, and many generous individual donors. The Advisory Committee Members of the List Visual Arts Center are gratefully acknowledged.

About the MIT List Visual Arts Center
Located in Cambridge, Massachusetts, the List Visual Arts Center is a creative laboratory that provides artists with a space to freely experiment and push existing boundaries. As the contemporary art museum at the Massachusetts Institute of Technology (MIT), the List Center presents a dynamic program of six to nine special exhibitions in its galleries annually, a program of exhibitions by emerging artists known as the List Projects, as well as a broad range of educational programs, events, and publications.

The List also maintains and adds to MIT’s permanent art collection; commissions new works through the MIT Percent-for-Art program, a collection of more than 60 site specific artworks throughout the campus; and oversees the Student Loan Art Program, which lends more than 600 works of art annually to MIT undergraduate and graduate students. Originally named the Hayden Gallery, MIT established this center for the visual arts in 1950 to provide a dedicated structure upon which to build the Institute’s existing relationship to the arts. It was renamed the List Visual Arts Center in 1985 in recognition of a gift from Vera and Albert List, and relocated to its current expanded location in the Wiesner Building on the campus of MIT, which was designed by MIT alumnus I.M. Pei (B.S. Architecture, 1940) and Partners Architects.