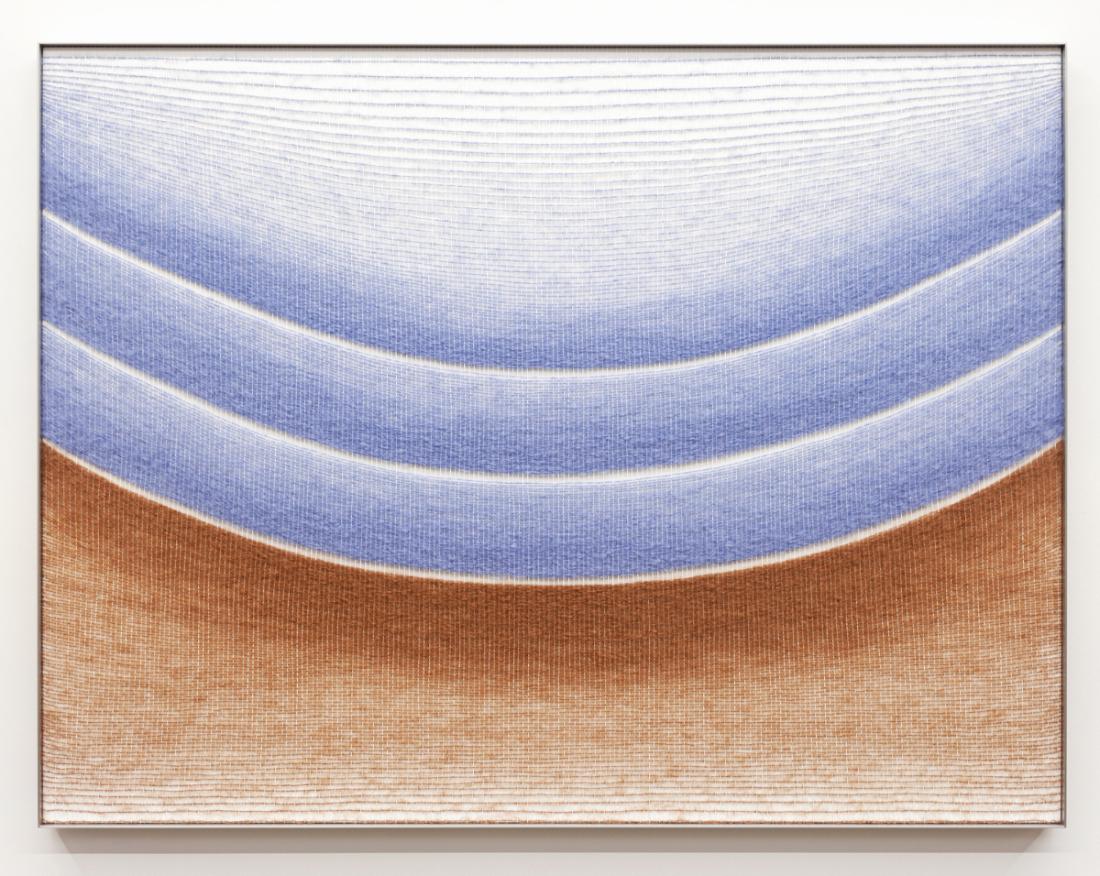 courtesy the artist and carvalho park

CARVALHO PARK is pleased to present Mimi Jung: The Subsuming Ellipse, marking the Seoul-born, Los Angeles-based artist’s second exhibition with the gallery and her first solo show in New York.

The history of modernist abstraction has offered artists two distinct modes, the autobiographic gesture as individual, against geometry, the iconic. With conscious and intuitive persuasion, Mimi Jung’s new woven compositions marry these two seemingly distinct poles. Jung is of a trajectory of artists who have utilized geometric shapes for their emotive possibilities, materializing a potent and personal formal language that is counterpoint to and in tandem with this dialectic. Mark Rothko’s ungraspable, transient rectangles come to mind, or Robert Motherwell’s tension-fraught ovals in his Elegies, even the delicate tonal shifts of Agnes Martin’s grids.

SIX DIGITS
Jung’s element is the ellipse, perfect and imperfect, while the parameters of her grid hold movement, color, tactility and light, each explored and experienced as mediums in equal palpability. This work is deeply and distinctly diaristic. Titles are predicated by a six digit date, alluding to time and place, indexing the memory that has catalyzed each composition. Illuminated by the lens of perspective, and through thousands of hours of weaving, Jung’s ellipses enticingly evoke the sensations and the internal and external forces of these resonating memories, of a four month period in 2017. Holding far more than abstract visual records, the works radiate as much clarity as vulnerability. 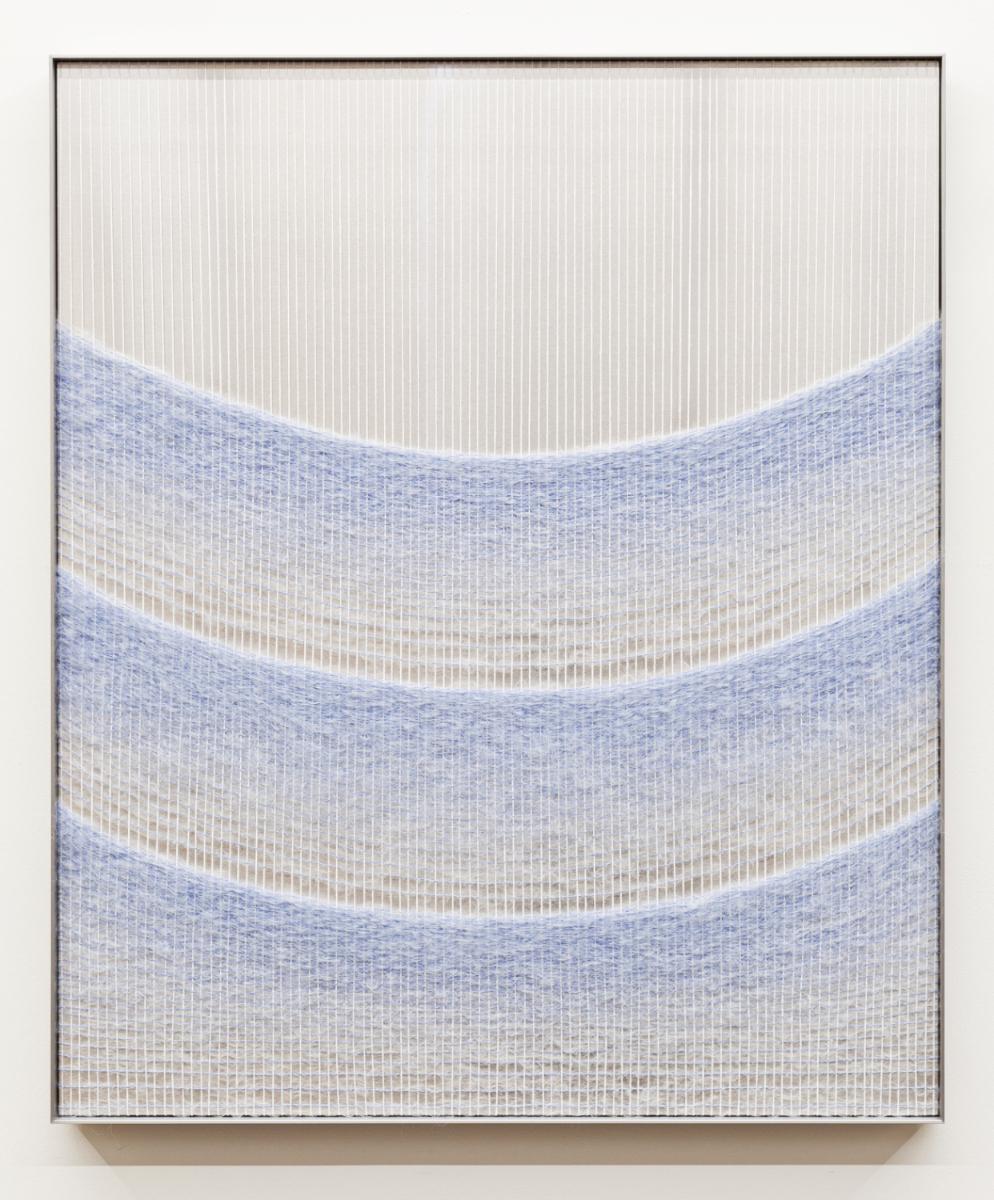 courtesy the artist and carvalho park

THE DRAWN ELLIPSE
The weft arcs through the works with the awareness of a drawn line, unrestricted by the rectilinear order imposed by the loom. The ellipse is among the first fundamental shapes practiced in perspective, with mathematics that give way to dimension. Facing the tapestry loom as she weaves, Jung draws movement and suspension in space as she contains a color field within the contours of an ellipse. In the six digit series, ellipses are always cropped, suggesting a larger composition beyond the frame, the full memory or complete story. It also implies that the forms are in motion, ascending or descending. In 102417 Pale Blue and Brown Ellipses, three tiers of blue, each representing a calendar day, fall upon a lower brown arc, cascading with the emotive power of the weight of the sky against the earth.

The complexities of the story unfold through this reactivity, in the works’ sensitive spatial and proportional
relationships. Ellipses push, mirror, replace, materialize and dematerialize. In the work 100317 Yellow Ellipses, a thin white rectangle extending the width of the composition obstructs the meeting of two ellipses, the denied expectation of a perfect fit. The reversed ellipse then disappears, and in another work, is completely absorbed by a denser field.

PILLOW + VOID
Jung’s now iconic use of brushed mohair blurs the distinction between material and feeling. Its pilosity tempers the work’s strong physicality, creating an absorbent field that completely takes one in – its tactility seductive and inviting with an effectual presence. The mohair suspends the weft as a defused line, and when intersected with light, results in a soft halo. A quiet visual buzz hovers just in front of the work’s geometry.

The atmospheric quality of the work’s surface amplifies the physical as much as the visual experience. What started as a geometric foundation has become an actively absorbing plane. Where the weft is absent however, is just as remarkable. Density of form against void sets off a palpable dichotomy of emotive contrasts – pillow and void, presence and absence, the feeling of being enveloped or exposed.

The works’ spatial depth is impressively ambiguous, extending in front and behind the grid, obscuring any notion of a two-dimensional woven plane. This space between forms is designed to integrate the transient effects of ambient light and human movement against the work’s metallic backing, further pulling the viewer into the work while mirroring an inexplicable emotional depth in this dimensional space. 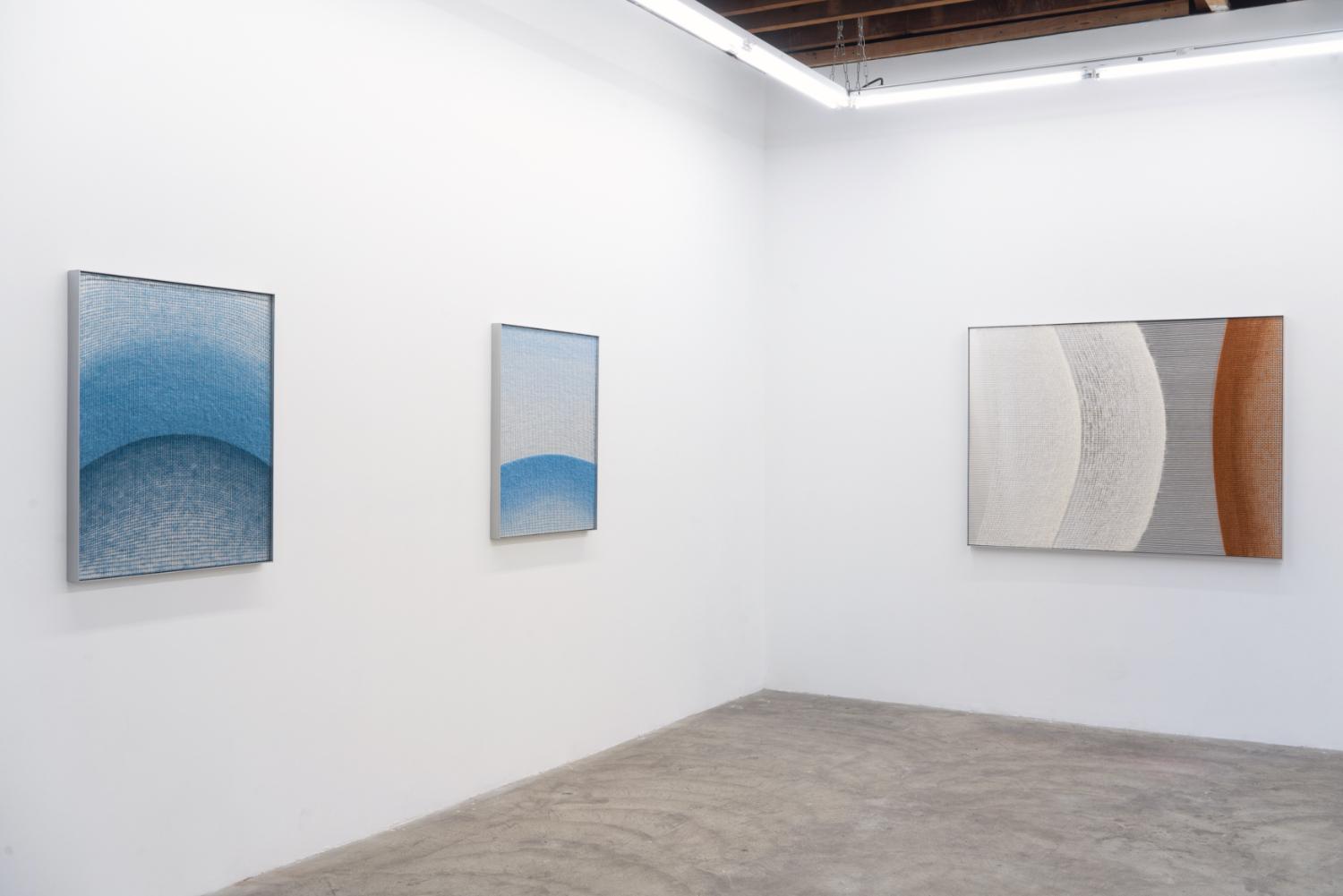 A SACCHARINE PALETTE
Two mesmeric gauzy fields comprise 111017 Blush Ellipses. The lines of the top ellipse quietly fall until they reach a slight vacuous arc. The two color fields almost touch, in pinks so close in tone. Here too, color assumes a physical presence, oscillating from dense form to elusive aura. Tonal gradations induce the most pleasing optical sensations, contrary to the work’s geometric, locked-in character. In the gallery, this results in a room of hovering color. Each shape is of a single hue, yet Jung layers and blends as many as six blues, of the most impossibly subtle variation, in an individual blue ellipse.

The series may be defined largely by its saccharine palette. At first consideration, its spectrum of candy colors appears at odds with the tumult and instability of the personal history behind the work. Instead it acts to balance it. Pale pink is a shade that sparks nostalgia, imparting innocence and serenity, and a tenderness towards the artist’s subject. The bold lucid warmth of yellow, of the brightest work in the exhibition, similarly functions as a stand-in for the child at the center of the work.

For the first time in Jung’s oeuvre, dense color meets dense color. In 110317 Pale Blue and Orange-Red Ellipses, the viewer experiences the abrupt illumination of this pairing – a supreme example of Johann Wolfgang von Goethe’s theory of simultaneous contrasts. In the emotional impact of these two opposing colors, is the exhibition’s most charged memory.

Mimi Jung: The Subsuming Ellipse is on view at Carvalho Park through December 19, 2020. The gallery will publish its first catalogue in tandem with the exhibition, featuring artist studio views and works from the exhibition in progress on the loom, expected mid-November, 2020. 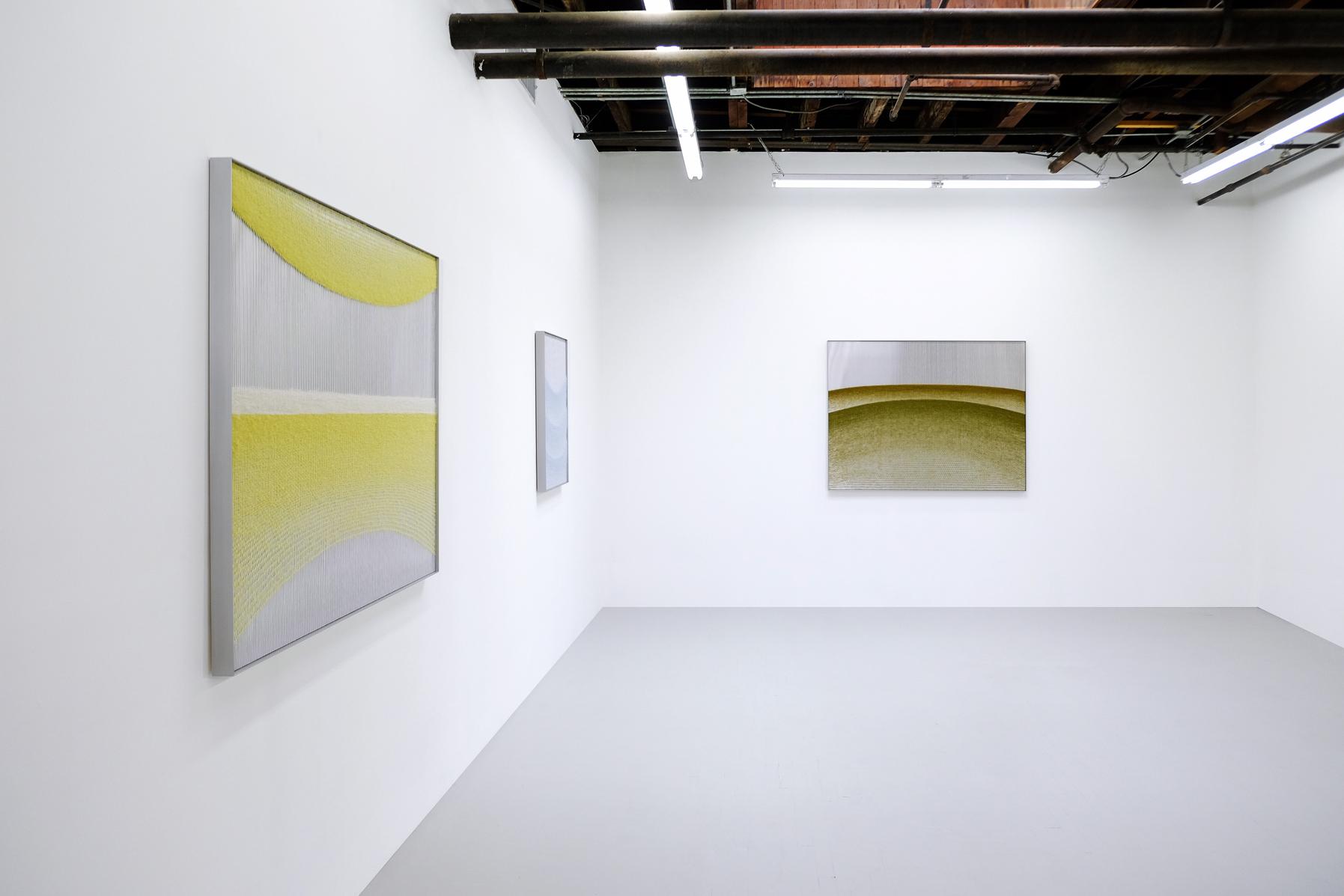 MIMI JUNG (b. 1981, Seoul, Korea) is a contemporary artist living in Los Angeles, California, working predominantly in fiber and cast metals. Jung has been awarded residencies with the Josef and Anni Albers Foundation, which she will conduct in 2021, and the John Michael Kohler Arts Center. Her first institutional exhibition was held at the National Gallery of Victoria, Melbourne, Australia. Jung’s work has been shown Stateside in solo exhibitions at Chamber gallery (New York) and in two-person and group exhibitions at Nina Johnson (Miami), Carvalho Park (Brooklyn), Fisher Parrish (Brooklyn), Egg Collective (New York), and Minnesota Street Projects (San Francisco). Internationally, Jung has exhibited at Somerset House (London, United Kingdom), Piazza San Sepolcro 2 (Milan, Italy), Palau de Casavells (Girona, Spain), Collectible (Brussels, Belgium), and with Les Gens Heureux Gallery (Copenhagen, Denmark). Jung received a Bachelors in Fine Art from The Cooper Union for the Advancement of Science and Art, New York, in 2003, and conducted postgraduate studies in Communication Design at Hochschule für Gestaltung und Kunst, in Basel, Switzerland, in 2004, and in Fine Art at Städelschule in Frankfurt, Germany, in 2005.

CARVALHO PARK (est. 2019)
Visually distinctive programming features emerging artists reconsidering the distinctions between disciplines and expanding the language of form. The gallery is drawn to work that engages as physically as it does visually. A synthesis of the directors’ backgrounds in architecture and the performing arts, exhibitions work to activate the viewer’s environment and to shift context and categorization, allowing objects to move freely in and across the art and design landscapes. Co-founded by Jennifer Carvalho + Se Yoon Park. Carvalho Park is a member of the New Art Dealers Alliance.