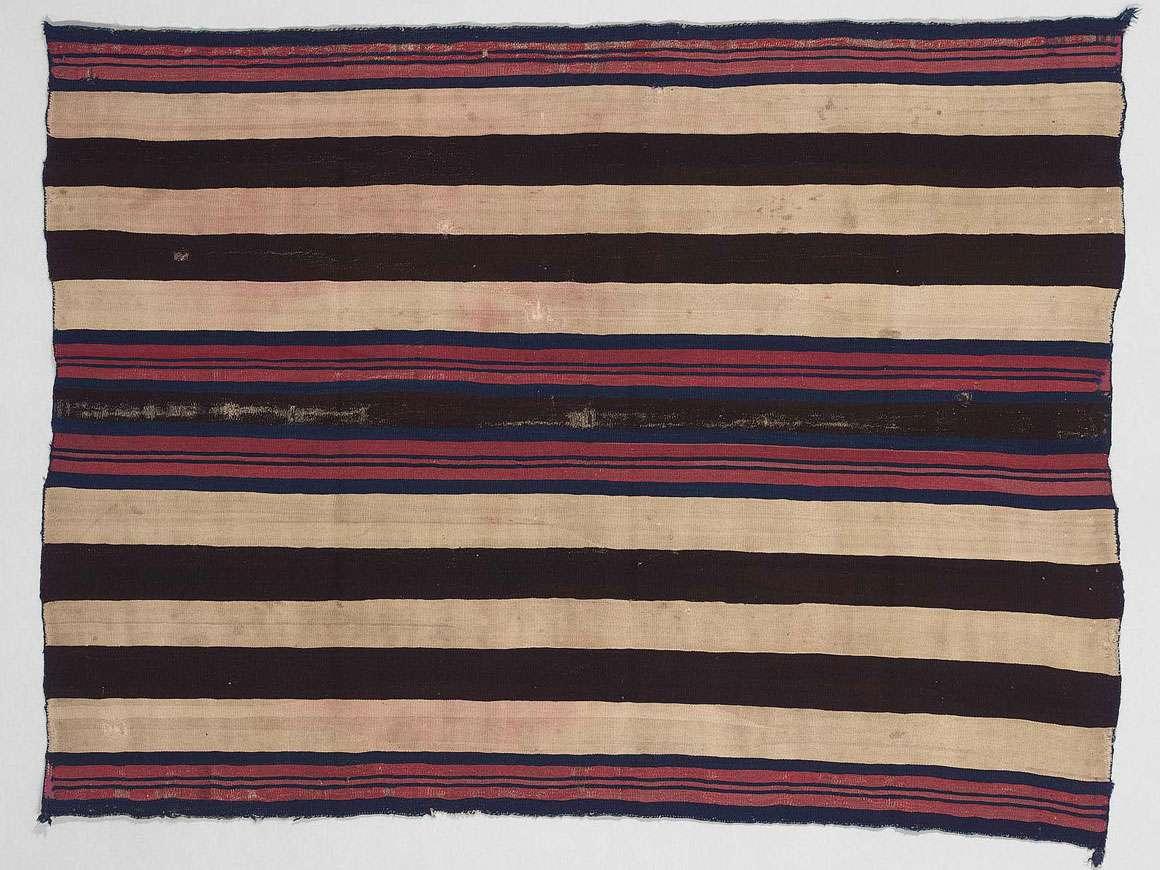 BOSTON—Navajo weavings, Zuni Pueblo pottery, Northern Plains beadwork and other works of Native American art formed part of the foundational collection at the Museum of Fine Arts, Boston (MFA), and captivated some of the Museum’s most influential early leaders. These rarely seen objects are featured in Collecting Stories: Native American Art, on view from April 14, 2018 through March 10, 2019, which explores the range of perspectives, motivations and voices involved in building these early holdings. The exhibition focuses on works of Native American art that entered the collection in the decades after the MFA first opened to the public in 1876, many of which were donated by East Coast collectors who traveled to the Great Plains and Southwest in this period, often inspired by notions of “authentic” Indian life. As both works of art and souvenirs, these objects initially fit into the Museum’s educational mission to represent art in all media and from all cultures. However, Native American art became less visible in the galleries during the early 20th century, and like other encyclopedic art institutions, the MFA eventually lent or donated most of its holdings to ethnographic and archaeological museums. Collecting Stories: Native American Art examines this moment in the MFA’s history, and seeks new ways to interpret Native American art and include voices of indigenous artists of the past and present. In conjunction with the exhibition, the Museum will host a variety of programs with scholars and contemporary Native artists—several of whom were consulted regarding the interpretation and display of the objects on view—including a symposium on May 6, free with Museum admission and open to the public. Collecting Stories: Native American Art, on view in the Bernard and Barbara Stern Shapiro Gallery, is the first of three sequential exhibitions using works from the MFA’s collection to address critical themes in American art. Generously supported by the Henry Luce Foundation.

“Thanks to the generosity of the Henry Luce Foundation, we’re able to examine thoughtfully our history of collecting Native American art and seek new and innovative ways of interpreting these objects. The Foundation will also support two additional exhibitions—conceived to build one upon the next—that will reposition the MFA’s collection by incorporating a range of perspectives to challenge traditional narratives of American art from 1876 to the late 1950s,” said Elliot Bostwick Davis, John Moors Cabot Chair, Art of the Americas.

Highlights of the exhibition include a Navajo (Diné) first phase chief’s blanket (1840–60), a rarely displayed masterpiece of the MFA’s collection that was given at the turn of the century by Denman Waldo Ross, an influential professor of art and design at Harvard University. A Plains roach (about 1880–85), or headpiece, made of deer and porcupine hair was collected by Reverend Herbert Probert during a missionizing trip to Wyoming in the early 1880s. Several examples of important Zuni Pueblo pottery (about 1875) were donated by General Charles Greely Loring, an early MFA curator and director, and his sister Jane Loring Gray as some of the first Native American objects to enter the Museum’s collection. Shortly after, Loring’s wife, Mary J. Hopkins, donated a two-piece Navajo woman’s dress (about 1890). The MFA has commissioned DY Begay, a fourth-generation weaver born in Tselani—a rural area located within the Navajo Nation—to create a Sis’łichii, or red sash belt, in order to complete the dress. Working in her studio in Santa Fe, the artist will hand dye and weave the belt on a traditional vertical loom. An integral part of a woman’s apparel and appearance in Navajo culture, a Sis’łichii identifies womanhood and displays self-worthiness and honor.

In addition to objects made by indigenous artists and communities, the exhibition presents works that examine the representation of indigenous peoples by Euro-Americans in the 19th century. On view for the first time at the MFA is the Progress Vase (about 1875), created by Massachusetts-based company Reed and Barton for the 1876 Centennial Exposition, which celebrated the 100th anniversary of the signing of the Declaration of Independence. This monumental work of silver, which presents stereotypical images of Native Americans, was on view at the Centennial Exposition in Philadelphia as the Battle of Little Big Horn (Battle of the Greasy Grass) raged in present-day Montana.

Supported by a grant from the Henry Luce Foundation, the MFA’s Art of the Americas department is presenting three one-year exhibitions that use understudied works from the Museum’s permanent collection to address critical themes in American art. Following Collecting Stories: Native American Art, a second exhibition will open in spring 2019, investigating the MFA’s early collection of contemporary American painting in the 1940s and 1950s. The third exhibition, opening in spring 2020, will focus on art and design between World War I and World War II. These exhibitions were developed collaboratively by the Art of the Americas staff: Elliot Bostwick Davis, John Moors Cabot Chair; Nonie Gadsden, Katharine Lane Weems Senior Curator of American Decorative Arts and Sculpture; Dennis Carr, Carolyn and Peter Lynch Curator of American Decorative Arts and Sculpture; Erica Hirshler, Croll Senior Curator of American Paintings; Layla Bermeo, Kristin and Roger Servison Assistant Curator of Paintings; and Caroline Barry Cole, Ellyn McColgan Assistant Curator of Decorative Arts and Sculpture; Zoë Samels, Curatorial Research Associate; and Susana Reyes, Department Coordinator. All three exhibitions will be accompanied by a range of public programs, including lectures, courses and demonstrations by contemporary artists.

“We are very excited by the vital work the team at the MFA is carrying out to foreground rarely seen areas of their collection through this series of exhibitions. These thoughtfully conceived presentations invite audiences to experience extraordinary works of art, and also to consider the role and responsibilities of museums in illuminating and sharing cultural histories” said Teresa Carbone, Program Director for American Art, Henry Luce Foundation.

Critical to the development of each of the three projects are “think tanks” with curators, scholars and community members, exploring innovative forms of display, interpretation, programming, visitor engagement and new forms of metrics. The grant from the Henry Luce Foundation also provides research and administrative support for the exhibitions through a three-year curatorial research associate position and three paid summer internships for college students from diverse backgrounds underrepresented in the museum field.

During the course of these exhibitions, the MFA will collect information about visitor experiences to inform future interpretations of the Art of the Americas collections. Reflections on the collaborative processes of creating these projects will be shared in a publication that will be released following the conclusion of the final exhibition.

The Museum of Fine Arts, Boston (MFA), is recognized for the quality and scope of its collection, representing all cultures and time periods. The Museum has more than 140 galleries displaying its encyclopedic collection, which includes Art of the Americas; Art of Europe; Contemporary Art; Art of Asia; Art of Africa and Oceania; Art of the Ancient World; Prints and Drawings; Photography; Textile and Fashion Arts; and Musical Instruments. Open seven days a week, the MFA’s hours are Saturday through Tuesday, 10 am–5 pm; and Wednesday through Friday, 10 am–10 pm. Admission (which includes one repeat visit within 10 days) is $25 for adults and $23 for seniors and students age 18 and older, and includes entry to all galleries and special exhibitions. Admission is free for University Members and youths age 17 and younger. Wednesday nights after 4 pm admission is by voluntary contribution (suggested donation $25), while five Open Houses offer the opportunity to visit the Museum for free. The Museum’s mobile MFA Guide is available at ticket desks and the Sharf Visitor Center for $5, members; $6, non-members; and $4, youths. The Museum is closed on New Year’s Day, Patriots’ Day, Independence Day, Thanksgiving, and Christmas. The MFA is located on the Avenue of the Arts at 465 Huntington Avenue, Boston, MA 02115. For more information, call 617.267.9300, visit mfa.org or follow the MFA on Facebook, Twitter and Instagram.