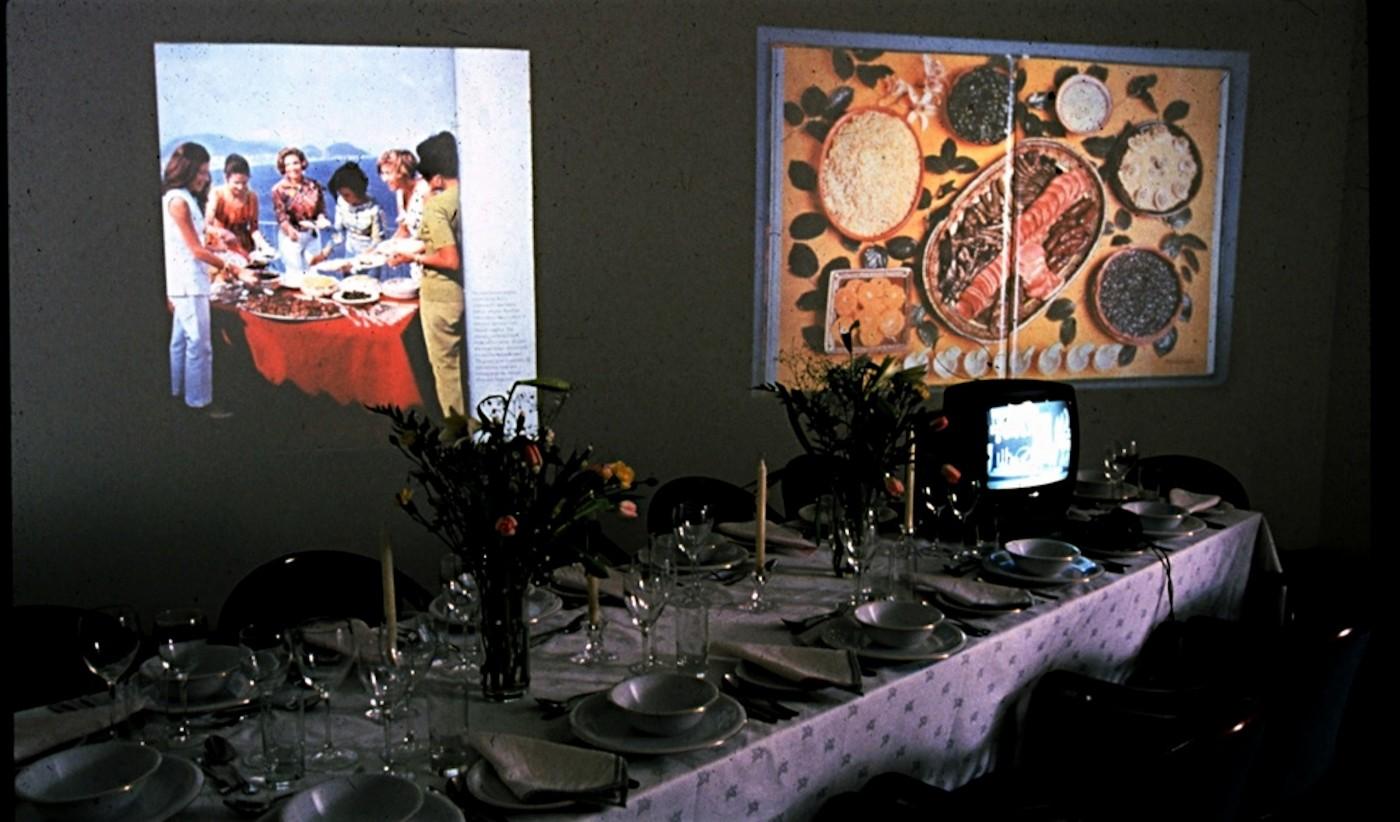 New York, NY – The Jewish Museum will present Martha Rosler: Irrespective, a survey exhibition of the work of the influential artist Martha Rosler, from November 2, 2018, through March 3, 2019. Rosler is considered one of the strongest and most resolute artistic voices of her generation; she is also a prolific writer, lecturer, professor, and advocate for social justice. She skillfully employs diverse materials to address pressing matters of her time, including war, gender roles, gentrification, inequality, and labor. From her feminist photomontages of the 1960s and 1970s to her large-scale installations, Rosler’s vital work reflects an enduring and passionate vision. 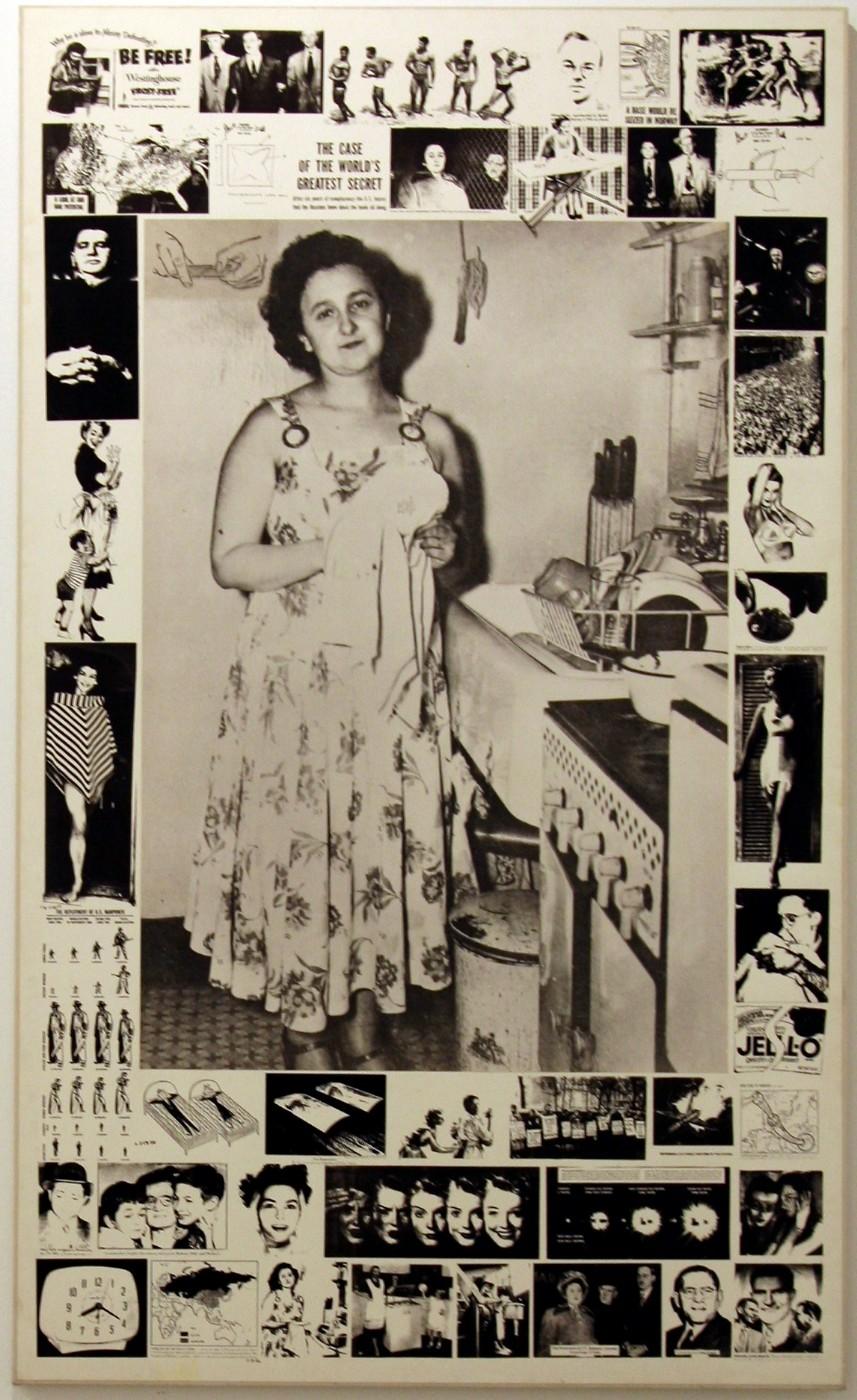 Martha Rosler, Unknown Secrets (The Secret of the Rosenbergs), 1988. Detail.

Martha Rosler: Irrespective showcases both well-known and rarely seen selections from more than five decades of work. Installations, photographic series, sculpture, and video represent a practice continually evolving and reacting to the shifting contours of political life. Throughout, Rosler’s work has been characterized by intellectual rigor and sharp wit, along with a sense of urgency directed at social and political issues that remain as relevant and immediate as when they first emerged.

Born and raised in Brooklyn, New York, and a graduate of Brooklyn College and the University of California, San Diego, Rosler began work as an artist in the 1960s, the era of the civil rights, antiwar, and women’s movements, as well as a time of great changes in modes of artistic production. Rosler has traced her interests not only to her coming of age during this time of political ferment, but also to the ethical grounding instilled in her by the religious education she received as a child. Though she started as an abstract painter, she soon turned to photography and montage, motivated by an interest in representational forms and inspired by the strategies of Dada and Pop art in the use of readily available commercial materials and imagery.

“Martha Rosler believes that art should teach, provoke, and motivate,” says Darsie Alexander, Susan and Elihu Rose Chief Curator at The Jewish Museum. “From her early photomontages to her pioneering feminist videos and her current work interrogating gentrification and income inequality, Rosler’s art is a call to action.”

The exhibition is organized in approximate chronological order. The first gallery features Rosler’s groundbreaking antiwar works, House Beautiful: Bringing the War Home (c. 1967-72), which combine mass media images of the Vietnam War with alluring domestic interiors found in home decorating magazines. The Vietnam War galvanized Rosler, and her determination to make eye-catching although wordless fliers to distribute at antiwar demonstrations was the impetus for such works. These photomontages skewer gender stereotypes while simultaneously critiquing war and the superficiality of the contemporary American Dream. In 2003, with the invasions of Iraq and Afghanistan, Rosler resumed the production of antiwar montages. By the next year she had returned to the cut-and-paste strategies of the 1960s, once again juxtaposing images of war with pictures of lavish interiors, lush gardens, and stylishly clothed models. 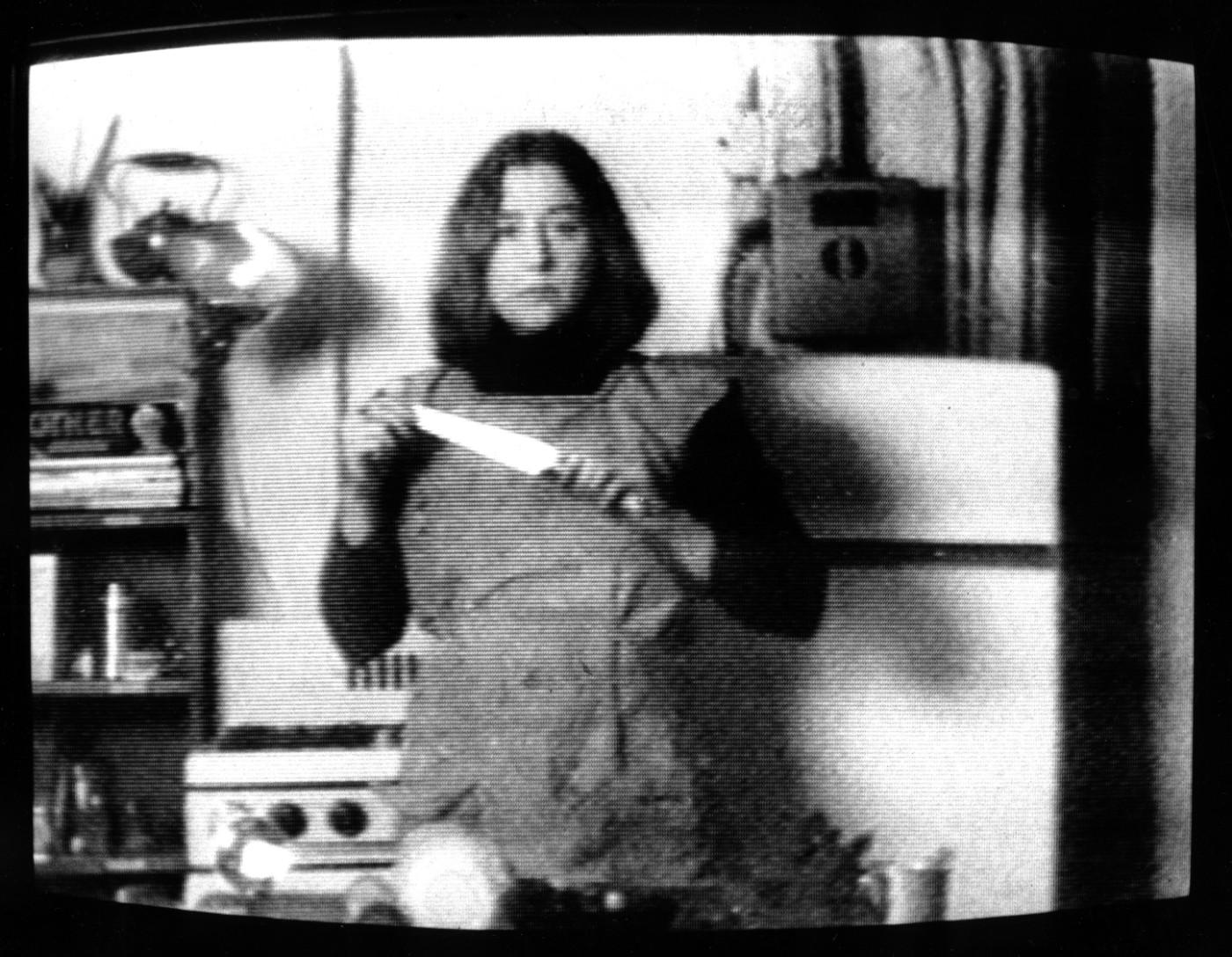 Rosler’s work of the late 1960s and 1970s weds social themes to a critique of representation. She explores the disarming ease and clarity that photography seems to offer, along with its tendency to reinforce myths and stereotypes. In The Bowery in two inadequate descriptive systems (1974-75), Rosler eschews the reigning conventions of social documentary photography, with its humanist emphasis on the face. Instead of photographing people, she shows us the setting — storefronts along what was then New York’s notorious Skid Row — littered with street detritus, particularly liquor bottles. She pairs these photos with groups of words, both commonly used and historical, for drunkenness and drunks, supplementing the visual scene with a widely shared vocabulary. Also present in this gallery are two other antiwar works. Diaper Pattern (c. 1973) is a series of phrases about the Vietnam War written on her son’s well-washed diapers. Unknown Secrets (The Secret of the Rosenbergs) (1988) is a work centered on a life-size image of Ethel Rosenberg, executed in 1953 for criminal conspiracy to commit atomic espionage. It also addresses the atomic threats made by the U.S. at the time.

Rosler repeatedly explores the subject of food — its production and preparation, its consumption, and its powerful meanings in our social, domestic, economic, and political lives, particularly in those of women. In works of the mid-1970s, Rosler adopted the voices of bourgeois housewives, food service workers, and domestic servants, articulating the frustration of women forced to adopt particular roles because of their gender or class. A Gourmet Experience (1974) taps into these themes directly, but with a focus on the wealth and labor divide between producers and the consumers being sold glossy images of the high-end and the exotic. The work combines video, audio, and slide shows, on and around a table set for a banquet. Her widely known video Semiotics of the Kitchen (1975) is a satirical performance veering between the high and the low of TV cooking shows: Julia Child versus a late-night cooking demonstration. In it, the artist represents everywoman in the domestic kitchen. Her long-term interest in the preparation and presentation of food and in the system of air travel intersect in Air Fare (ongoing), photographs of the meals served on airplanes. 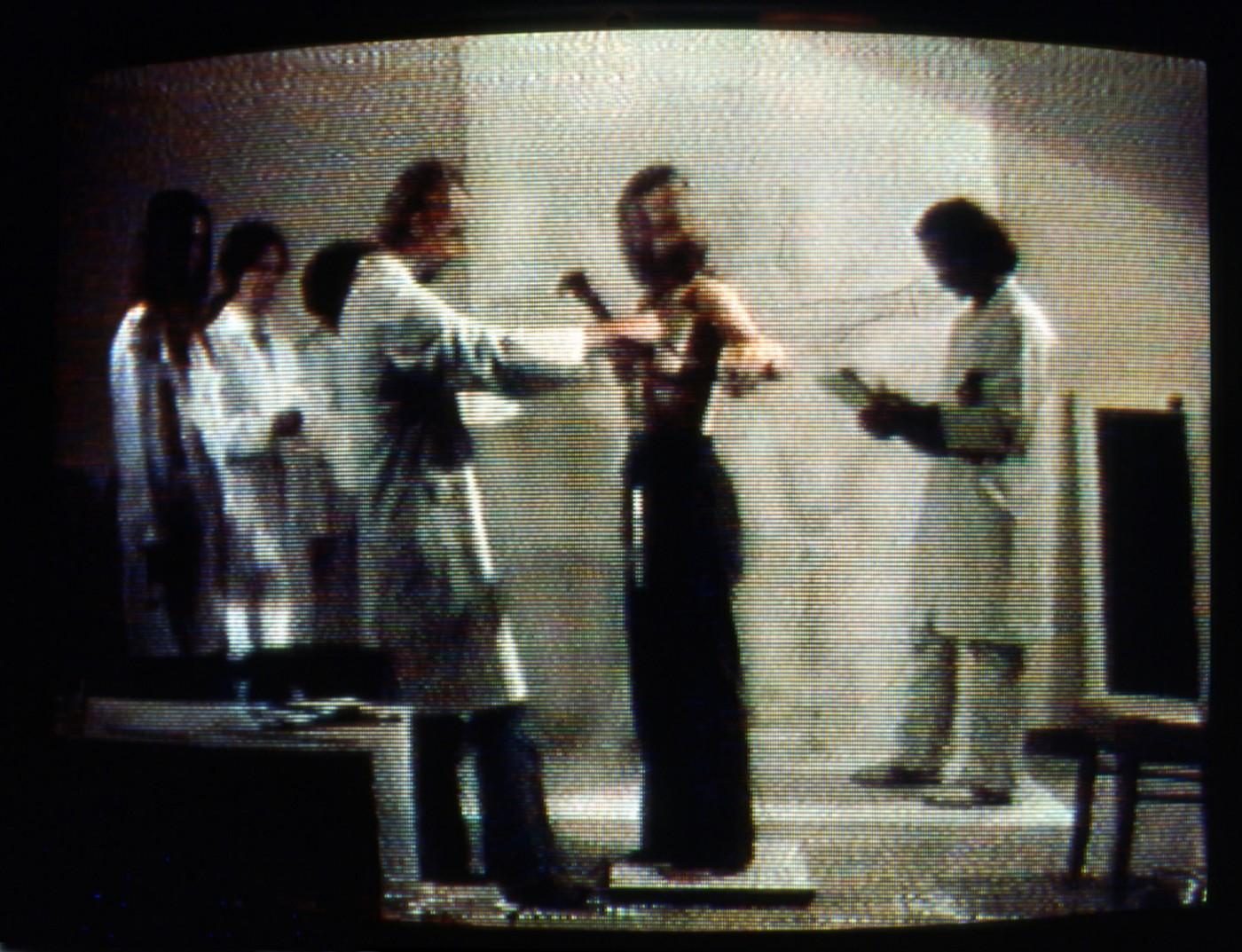 In the 1970s, Rosler was part of the first generation to use the new consumer-oriented video equipment for artistic ends. The exhibition includes samples of her video work across more than four decades. She performs in several of her video works, not only in Semiotics of the Kitchen but in others such as Born to Be Sold: Martha Rosler Reads the Strange Case of Baby $/M (1988, made with Paper Tiger Television), in which she portrays a cast of characters ranging from a sperm to a trial lawyer. In Vital Statistics of a Citizen, Simply Obtained (1973), she is the principal character in a work that explores the everyday scrutiny of women’s bodies, on the one hand, and on the other hand state surveillance and control both of women and of racial Others.

Rosler often makes photographs in extensive, ongoing series, which, as they grow over time, record shifts in the culture she examines. The series In the Place of the Public (1983-ongoing), Rights of Passage (1993-98), and Ventures Underground (1980-ongoing) each explore spaces of passage and movement such as highways, airport terminals, and subway platforms that people typically encounter on the way to someplace else. These landscapes of everyday life, as banal as they may be, constitute the systematized blueprint of the world. Greenpoint Project (2011), accompanied by a slideshow of local storefronts, is part of an ongoing set of works documenting the increasing velocity of gentrification in her Brooklyn neighborhood.

The last gallery in the exhibition includes the series Off the Shelf (2008, 2018), digital images of book spines on diverse subjects, from slavery to science fiction, drawn from Rosler’s traveling library. This gallery also features works that confront the practice and ideology of authoritarianism in government. The large-scale installation, Reading Hannah Arendt (Politically, for an American in the 21st Century) (2006), highlights the significance, in the contemporary moment, of Arendt’s writings on totalitarianism, censorship, and the culture of fear. Also included are artworks addressing the current political climate in the United States. Point n Shoot(2016) draws its central text and image from a campaign rally held during the Republican presidential primaries in 2016. The photo of then-candidate Donald Trump is overlaid with a quote from his speech. In the background are names of unarmed Americans of color who have died at the hands of police or while in police custody, without legal consequences to the vast majority of the officers involved. The montage was updated in 2018 with the names of further victims of police violence.