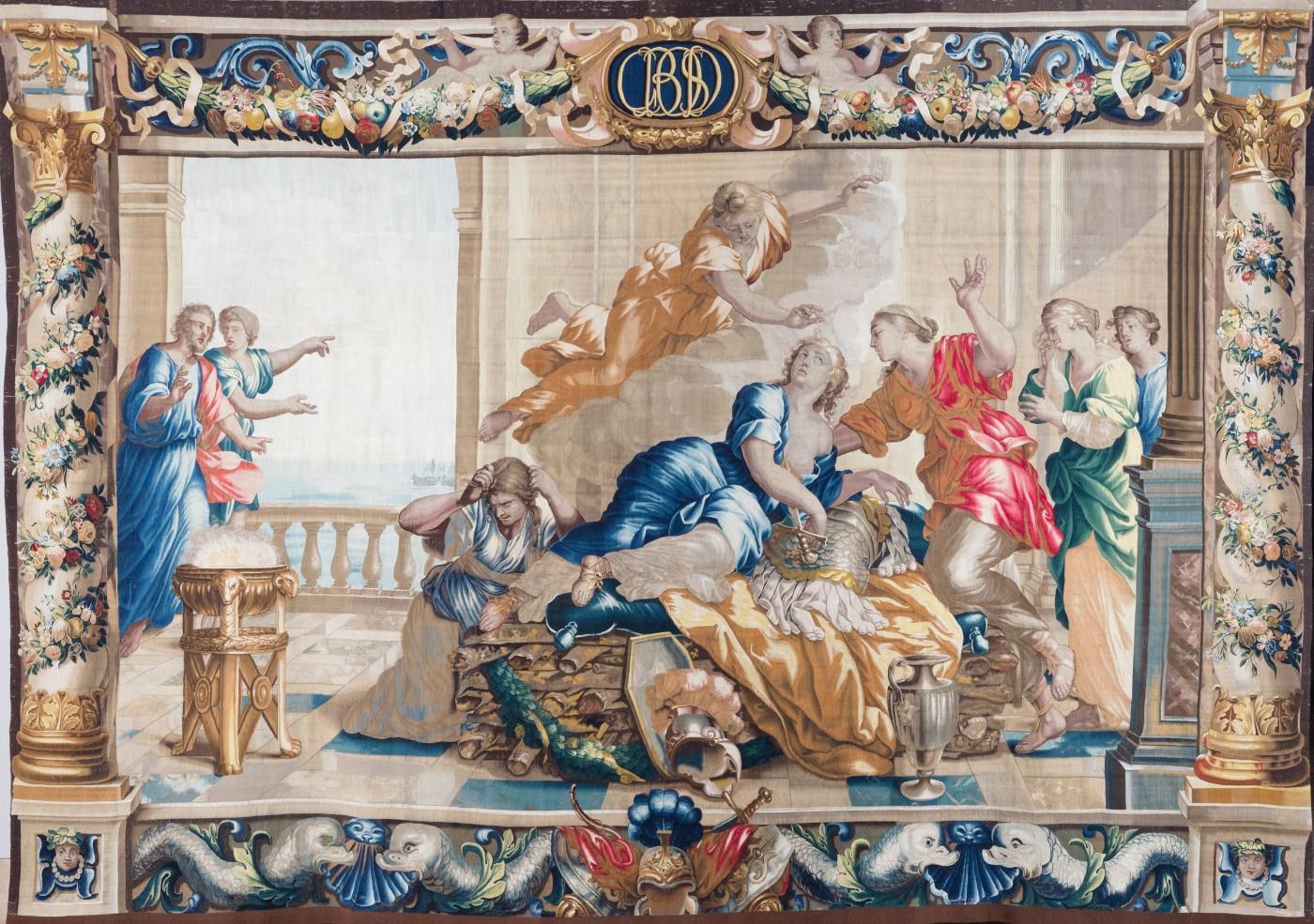 Pasadena, CA—The Norton Simon Museum presents Once Upon a Tapestry: Woven Tales of Helen and Dido, an exhibition of exquisite tapestries and rare cartoons (full-size preparatory drawings) that illustrate two iconic love stories found in the classical epic poems the Iliad and the Aeneid. Helen and her contested romance with Prince Paris of Troy, as described in Homer’s Iliad, is represented in four sumptuous Flemish tapestries from around 1500; and Queen Dido of Carthage and her passionate affair with Virgil’s hero Aeneas is represented in a rare set of six cartoons, and one related tapestry from the early 17th century. Seen together, these monumental works of art demonstrate the appeal of these female-centric narratives in Early Modern Europe, the power of tapestry to tell such stories, and the inventiveness and skill employed to produce these splendid objects, made for only the wealthiest and most distinguished patrons. 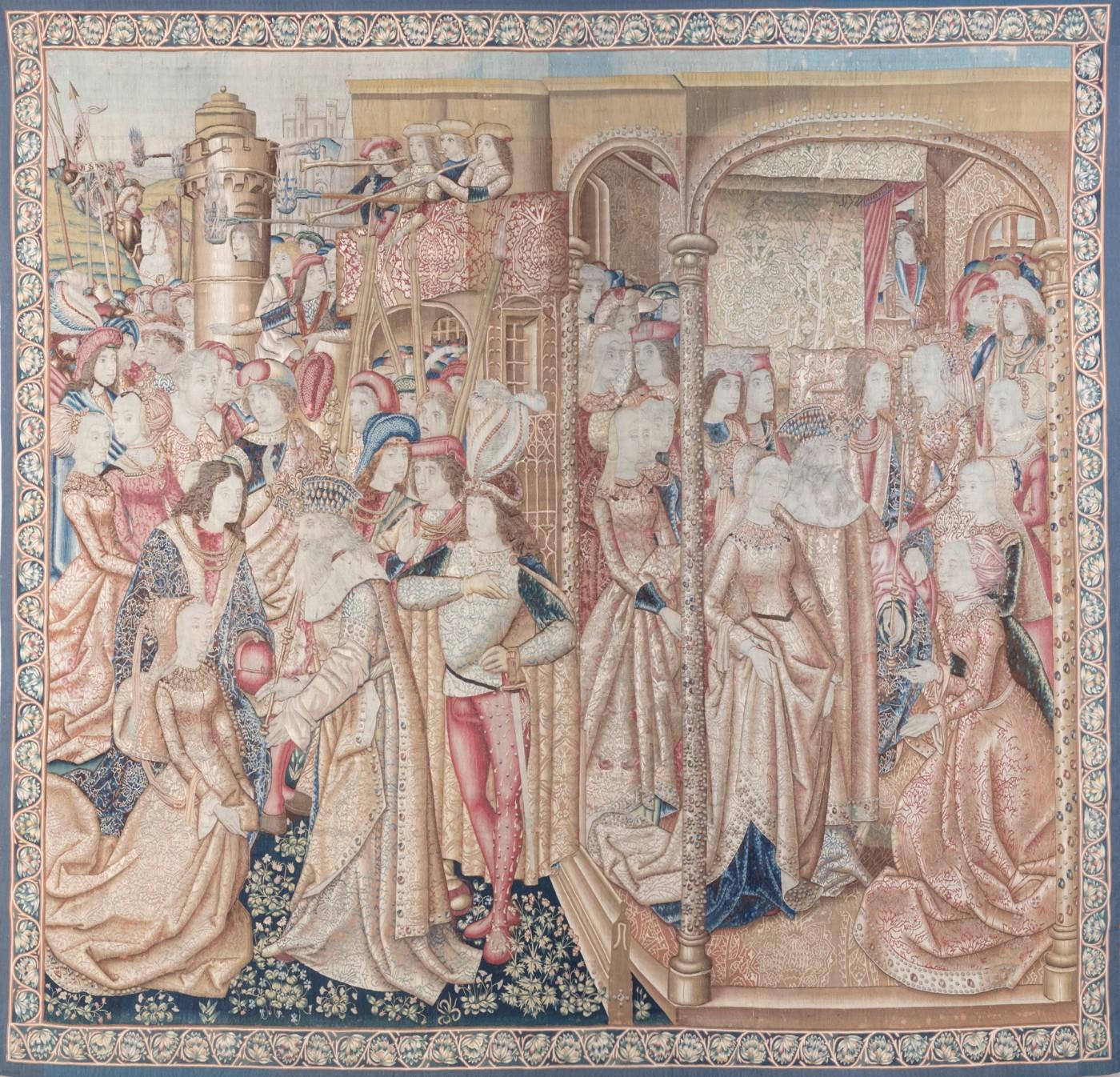 Workshop Unknown, Arrival of Paris and Helen at the Court of Priam, King of Troy, c. 1500–25. Wool and silk.

Homer’s epic poem of the Trojan War, the Iliad, from the 8th century BCE, is the source for the story of Helen of Troy. Medieval poets eagerly updated the ancient tale and freely added commentary connecting the European nobility to their Trojan counterparts. In the visual arts, the primary focus of Le Roman de Troie (The Romance of Troy) was the conflict, and battle scenes were well suited to the large-scale, multi-paneled character of tapestry. It is notable then that Helen, an icon of beauty whose abduction provoked the Trojan War, figures so prominently in four of the weavings exhibited. They chronicle Helen’s fate from her arrival in Troy and marriage to Paris, to her return to Sparta and reconciliation with her first husband, Menelaus. Rich with detail, these fabulous silk and wool tableaux introduce us to contemporary court attire and to medieval stagecraft where the jewel-encrusted architectural framework calls attention to the principal subjects.

If the beautiful Helen was the genesis of conflict, Dido’s fate, derived from Virgil’s epic poem the Aeneid, 29-19 BCE, is considerably more personal and nuanced. Here the ill-starred love between Queen Dido of Carthage and the Trojan Prince Aeneas, who is destined to found the mighty city of Rome, involves two accomplished, ambitious protagonists, equal in every respect. With great imagination and verve, the Italian Baroque artist Giovanni Francesco Romanelli (1610–1662) conceived Dido as the central character of each dramatic scene. Aeneas plays a supporting role. From the banquet she hosts to welcome her guests from Troy, in which her love for the warrior is kindled, to the prince’s abandonment of Dido as he leaves Carthage to establish Rome, the emphasis of the cycle revolves around her destiny. And Romanelli’s grand and sympathetic presentation arouses our compassion for her undoing. 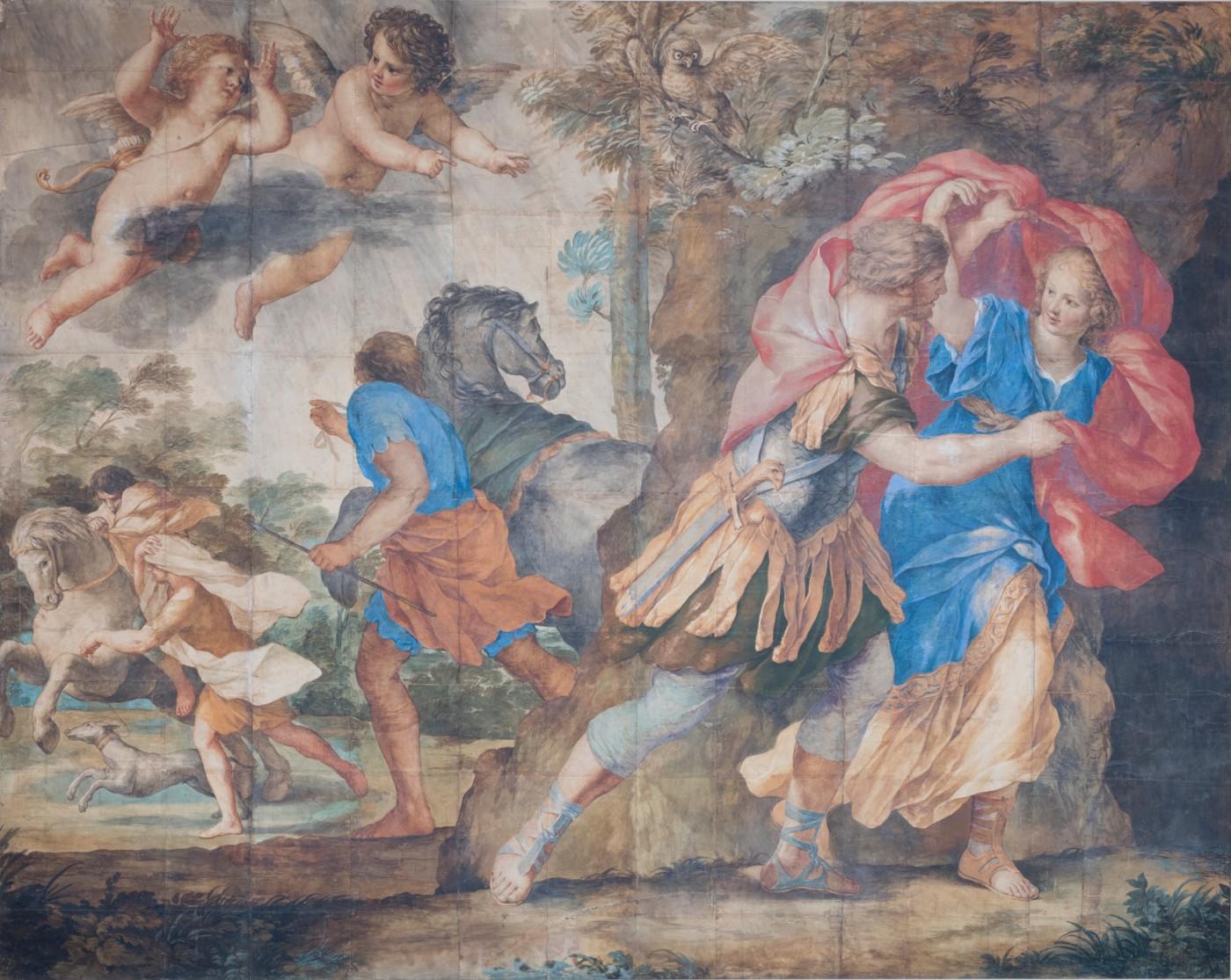 The subject was immensely popular during the 17th century and inspired Romanelli’s design of eight full- scale cartoons to tell it. Six cartoons survive, fashioned in gouache and watercolor on paper. Inherently fragile, they are infrequently on view. That they exist at all is a testimony to the value accorded to them from the moment of their making. The Museum possesses one tapestry from the last episode of the lovers’ narrative. Recently restored, Death of Dido offers opportunity to comprehend the design process, compare the weaving with its cartoon prototype, and appreciate the unique character of each medium. In the weaving, the narrative appears in reverse, the result of its production on a low-warp loom. Surrounded by a faux frame, the tapestry’s composition is presented as a “woven picture,” bordered by the architectural motif of two Solomonic columns ornamented with garlands, and linked by an entablature at the center of which are ligatured letters that identify the Swedish aristocratic couple who commissioned the tapestry set: Count Gustav Otto Stenbock (1614–1685) and Christina Catharina De la Gardie (1632–1704). The tapestry set to which the Death of Dido belonged may date to the 1670s.

The tapestries derived from Romanelli’s cartoons were the masterpieces of Michel Wauters’ Antwerp studio during the 17th century. At least 8 sets of these tapestries were woven for royal and aristocratic patrons from Italy to Sweden; only three complete editions survive to the present day along with individual weavings.

Once Upon a Tapestry: Woven Tales of Helen and Dido is organized by Curator Gloria Williams. A series of lectures, performances and educational programs will be offered in conjunction with the exhibition. More details will be shared closer to the opening date.