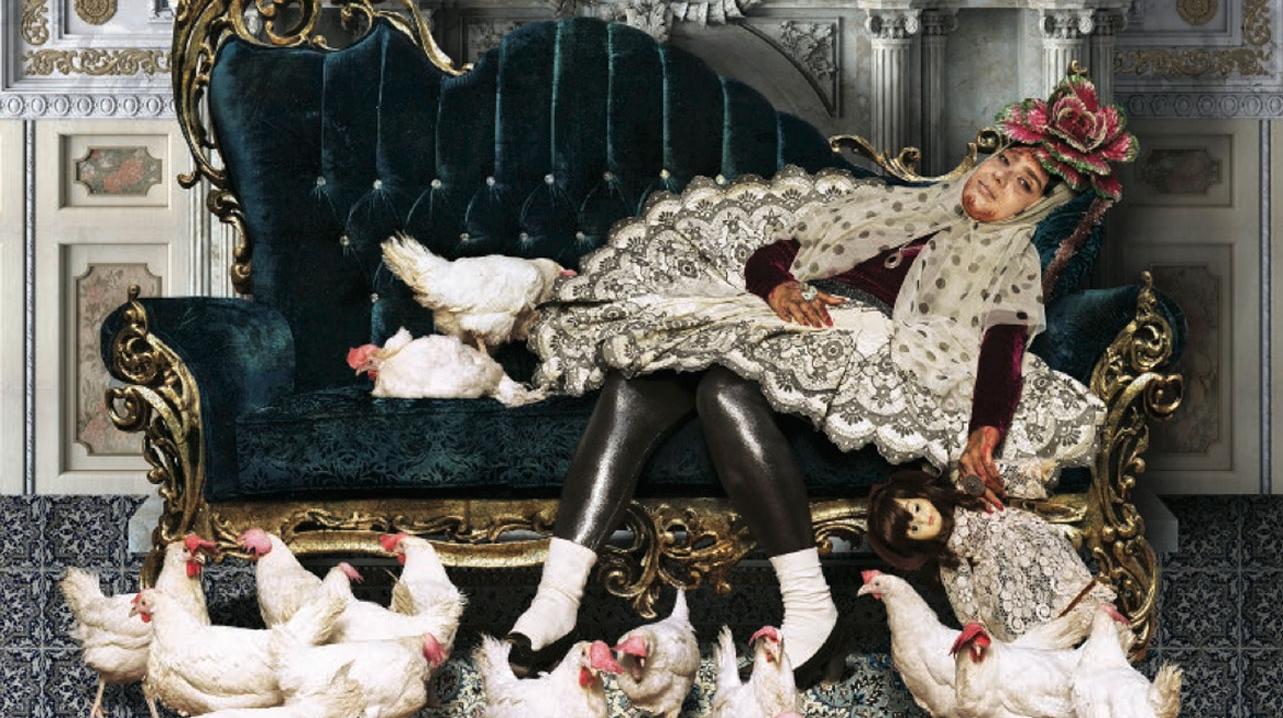 The Los Angeles County Museum of Art (LACMA) presents In the Fields of Empty Days: The Intersection of Past and Present in Iranian Art, a groundbreaking exhibition of both historical and contemporary Iranian works that highlight ways in which artists have used and continue to use the past as a metaphor for the present day. This notion is revealed in art and literature in which ancient kings and heroes are used in later contexts as examples of virtue or as objects of derision, while long-gone Shi‘ite saints are evoked as champions of the poor and the oppressed. Particularly timely to American audiences is the exhibition’s exploration of how Iranian artists negotiate the politically charged issues of governance and faith in creating objects both novel and relevant.

The exhibition examines this appropriation of the past, largely in the context of the present, through 125 works of art in a variety of media including photography, painting, sculpture, video, posters, political cartoons, animation, and historical illustrated manuscripts. More than 50 artists are featured—many of whom are active and working today—including Pouya Afshar, Fereydoun Ave, Siamak Filizadeh, Shadi Ghadirian, Ramin Haerizadeh, Shirin Neshat, Parviz Tanavoli, and Newsha Tavakolian. In focusing on the intersection of past and present, In the Fields of Empty Days offers new scholarship and a novel approach to viewing anachronisms in Iranian art. 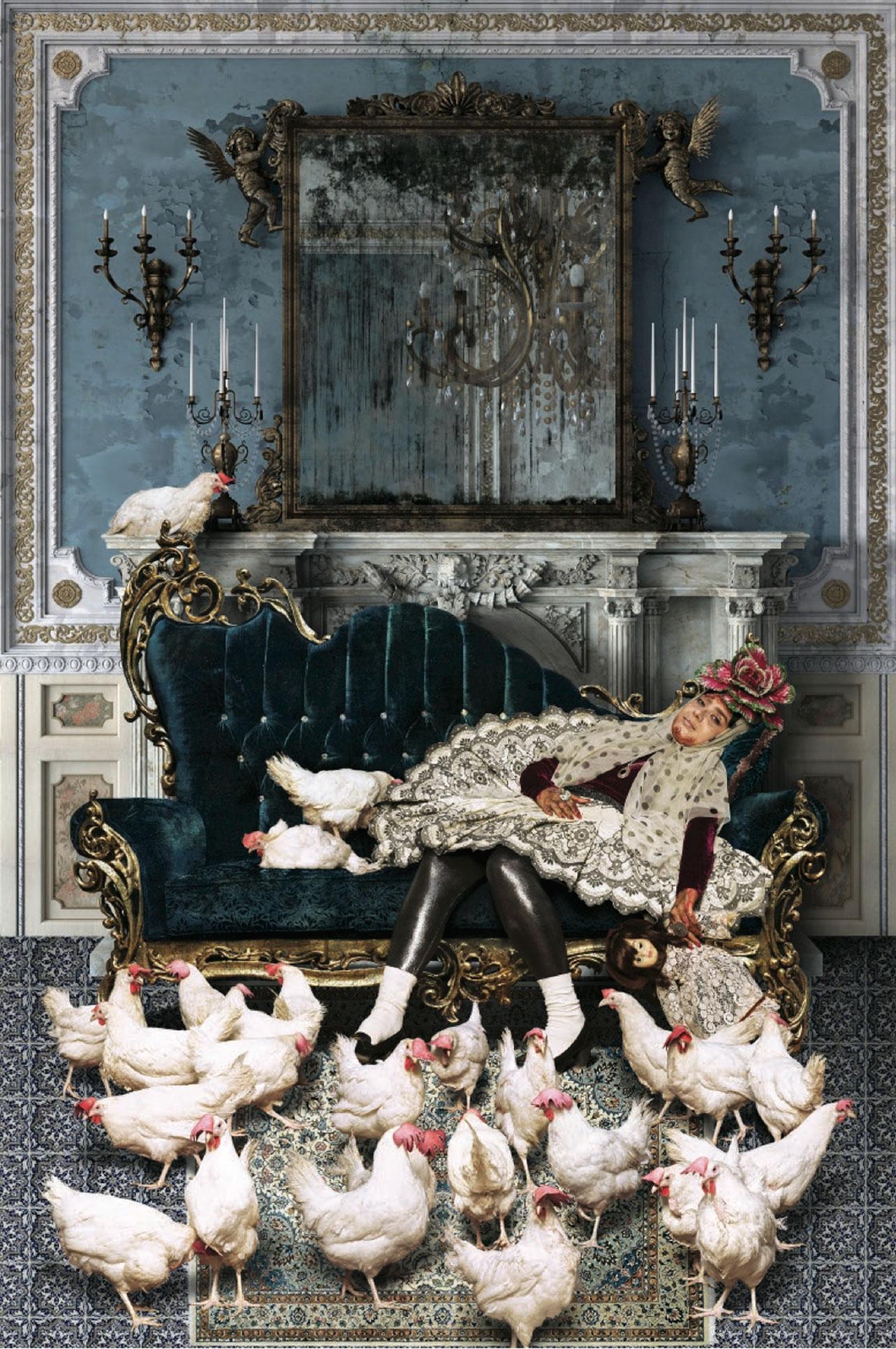 “LACMA has one of the most significant collections of Islamic art in the world,” said LACMA CEO and Wallis Annenberg Director Michael Govan. “Over the last decade we have expanded our collecting parameters to include contemporary works by artists from, or with roots in, the Middle East, giving us the largest such collection in America. Together these two collecting areas help to demonstrate the complex and pivotal relationship between historical and contemporary art, making LACMA the ideal institution for a first-of-its-kind exhibition on the past and present in Iranian art.”

“This show is about an art that willfully bends time and obscures place, rather than conforming to the linear narrative that we associate with traditional art history,” said Linda Komaroff, curator of Islamic art and department head of Art of the Middle East at LACMA. “Its goal is to portray the ideas of identity, politics, faith, history, and culture that help define the remarkably diverse artistic heritage of Iran as viewed through the lens of time.”

Exhibition Overview
In the Fields of Empty Days features nearly 60 works from LACMA’s permanent collection, many of which were recently acquired specifically for the exhibition. Covering a wide swath of Iranian art, featured works include 16th- and 17th-century Safavid manuscript illustrations as well as 19th-century Qajar-era photographs, and concentrates primarily on the art from the final years of the reign of Mohammad Reza Shah (r. 1941–79) in the 1970s, through the Islamic Revolution of 1979, and up to the present day. In the latter group are digitally manipulated photographs, sculpture, paintings, drawings, carpets, and videos.

In the Fields of Empty Days is organized by theme in two broad sections: Kings and Heroes; and Saints and Martyrs, and includes a small section of documentary photographs, posters, and publications.

Kings and Heroes
The connection between kingship past and present manifests most significantly through illustrated versions of the Shahnama or Book of Kings, the Iranian national epic, which though written in the Islamic era, tells of the pre-Islamic kings and heroes. From the first such royally commissioned manuscripts, which belong to the period of Mongol rule in Iran (1256–1353), the ancient kings were recast as contemporary Islamic rulers. The visual identification between the sovereign, often himself not a Persian, and earlier Iranian kings was deliberate and significant, used to justify and legitimize the ruling elite. This type of politically motivated patronage helped to ensure the cultural and aesthetic importance of the Book of Kings through the end of the 19th century. Its kings, heroes, and demons are embedded still within Iranian culture.

Featured in this section are several works from artist Shirin Neshat’s 2012 photographic series "The Book of Kings," which she brings forward to the present day emphasizing the inherent nationalism of the text. She photographed friends and acquaintances with their hands crossed diagonally over their hearts, or just their bare, dangling legs, to depict patriots and a smaller group of villains represented by full-length male portraits with battle scenes from the Shahnama covering their bare upper torsos like tattoos. Neshat has said that this series was inspired by political events in Iran and elsewhere in the Middle East, including the Arab Spring.

Saints and Martyrs
Iran’s adoption of Shi‘ite Islam in the early 16th century also helped to fix the past irrevocably in the present through the cycle of remembrance of the martyrdom of the Shi‘ite Imams or leaders, most notably Husain, grandson of the Prophet Muhammad. Murdered with his family and companions at Karbala, in 680, Husain is commemorated each year on the anniversary of his death through ta‘ziya, a passion play performed by costumed re-enactors. Participants in the emotionally-charged and graphic ritual are made to experience the killings and to mourn the slain in present time. The story was also visualized through large scale paintings that only survive from the late 19th century and included in the exhibition.

Artist Pouya Afshar’s "Mourn Baby Mourn" (2017) was created for the exhibition and explores ta‘ziya as well as the artist’s personal experience with grief. Set within a large tent in a dedicated gallery space, the installation features four projections of an animated video referencing the historic martyrdom and incorporating theatrical elements, such as a man framing his eyes with two outspread fingers to indicate that the audience is being watched. Afshar seeks to convey both the powerful emotional state induced by ta‘ziya and the catharsis of community grieving.

Both of these strands—ancient kings and heroes, and martyred Shi‘ite Imams—carry forward, even sometimes overlapping, in contemporary Iranian art. Where the past once was visualized in terms of the present, by the second half of the 20th century, the present began to be rendered anachronistically as a form of often barely disguised political and social commentary. The exhibition demonstrates not only that Iranian culture is multidimensional, but also that in evoking the past, Iranian artists continue to create new visual metaphors to describe the present.

Public Programming
Panel Discussion: Women and the Arts in Iran Sunday, May 6 | 1 pm Bing Theater | Free and open to the public
This panel discussion will provide, from a female perspective, an up-to-date and accurate account of how women operate and negotiate their way in Iran as artists, looking at the film and music industries as well as fine arts. This program is supported by a grant from the American Institute of Iranian Studies.

Film Premiere: Kanoon Monday, May 21 | 7 pm Bing Theater | Free and open to the public
LACMA presents the world premiere of Kanoon, a documentary about the history and impact of the Institute for the Intellectual Development of Children and Young Adults, more commonly known as Kanoon. The screening will be followed by a Q&A with the director and producer Khatereh Khodaei.

Pop-up Naqqali BCAM, Level 2
Throughout the run of the exhibition, there will be pop-up naqqali performances, a traditional form of storytelling in Iran. Please check with the Ticket Office for exact times upon arrival at the museum.