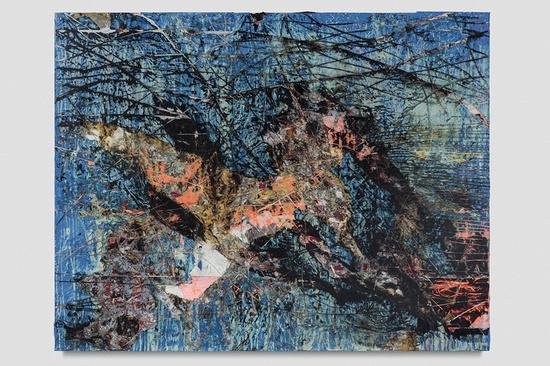 Los Angeles… Hauser & Wirth is proud to present ‘Mark Bradford. New Works,’ the artist’s first gallery exhibition in his hometown of Los Angeles in over 15 years. The ten new works on view find Bradford furthering his investigations into the technical and sociopolitical potentials of abstract painting, deploying the profound insight and inventiveness that have established him as one of the most significant and influential artists of his generation. ‘New Works’ opens on the heels of a year in which Bradford received acclaim for ‘Tomorrow Is Another Day,’ his searing exhibition for the US Pavilion at the 2017 Venice Biennale, which will travel to The Baltimore Museum of Art (BMA), and unveiled ‘Pickett’s Charge,’ a monumental commission for the Hirshhorn Museum and Sculpture Garden in Washington, D.C., inspired by artist Paul Philippoteaux’s nineteenth-century cyclorama in Gettysburg National Military Park, Pennsylvania. More recently, Mark Bradford’s ‘We The People’ (2017) – a site-specific painting comprised of 32 panels containing the entire US Constitution – was commissioned for the new US Embassy in London.

Bradford employs the ‘tools of civilization’ – billboards, merchant posters, newsprint, comics, magazines, and endpapers – to conflate cultural and political forces, and create layers of social commentary in paintings that evoke deep feeling. ‘How we build and destroy ourself are the materials that I’m really interested in,’ the artist once stated, ‘and paper is one of the main ways in which information is displayed.’ Through his rigorous physical approach to the material presence of painting, Bradford has addressed powerful issues of our time, including the AIDS epidemic, the misrepresentation and fear of queer identity, and systemic racism in America. His recent work engages in a broader excavation of American history to raise questions about the preservation of the past and the transference of power.

In the new works on view at Hauser & Wirth, Bradford probes stories found in comic books to question the archetype of the antihero and the influence of the media on contemporary society, while also revisiting misconceptions of black identity and gender as seen in previous works. ‘New Works’ presents paintings that extend the artist’s examination of homophobia and racism in American society, continuing themes explored in Bradford’s multimedia installation ‘Spiderman’ (2015), which was shown at the Hammer Museum in LA in 2015.

Recycling pages found on the streets of LA, Bradford layers pop culture onto and into his canvas – (a tactic he has employed since graduating from the California Institute of the Arts in 1997 and has perfected in a distinctive technique of scraping and gouging) – ‘pulling things that don’t belong in the art world and willing them into it.’ The result is a merger of action-packed imagery and fantastical characters with the artist’s distinctive approach to socially committed abstraction. Bradford has titled select paintings after phrases in the speech bubbles of his found comic panels – ‘Tonight…. we feed!’ (2018), ‘I heard you got arrested today’ (2018), and ‘You’re going to regret this when I catch you, you little shit’ (2018). Deep lacerations carve through bruised surfaces to conjure both the natural and the man-made, simultaneously evoking spider webs, neighborhood streets, arterial veins, and woven snares: patterns of the body, individual and collective. Continuing to explore the central themes of his oeuvre, and bringing forth motifs used in previous series, Bradford works his surfaces to reveal the conflicts intertwined in the everyday.

Among the paintings on view is ‘Moody Blues for Jack Whitten’ (2018), a composition of rhythmic lines and shades of blue that Bradford initiated before the death of his friend Jack Whitten, and completed for this exhibition. A remarkable man and path-breaking abstract painter, Whitten continues to serve as an inspiration for Bradford.

About the Artist
Mark Bradford was born in 1961 in Los Angeles, California, where he lives and works. He received a BFA (1995) and MFA (1997) from the California Institute of Arts in Valencia CA.

In 2017, Bradford represented the United States at the 2017 Venice Biennale with a major solo exhibition ‘Tomorrow Is Another Day.’ He also presented a monumental commissioned cyclorama of paintings at the Hirshhorn Museum and Sculpture Garden in Washington D.C., which served as Bradford’s largest site-specific work to date at 400 linear feet.