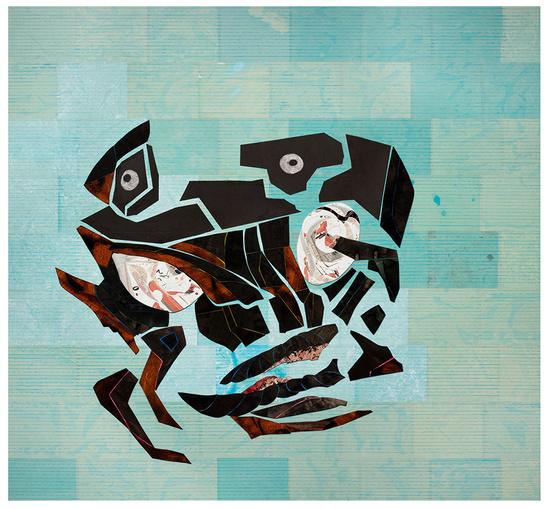 Los Angeles... Beginning 4 November, Hauser & Wirth Los Angeles is pleased to present ‘Ellen Gallagher. Accidental Records,’ the artist’s first solo exhibition in Los Angeles. Comprising a suite of new works that includes paintings and drawings, the exhibition finds Gallagher returning to and building upon themes and motifs at the center of her practice. These works extend her exploration of the complex histories of the Black Atlantic and the afterlives of the Middle Passage. Widely acclaimed for her own genre of history painting, Gallagher questions accepted geographies. The layered surfaces of her works become a kind of reckoning, evoking, in the artist’s words, ‘the way sailors mark their location at sea, determined by return.’

On view through 28 January, ‘Accidental Records’ will be accompanied by a fully illustrated catalogue featuring texts from Adrienne Edwards, Curator at Performa and Walker Art Center, and Philip Hoare, a writer whose books include ‘Leviathan, or the whale,’ ‘The Sea Inside’ and, most recently, ‘RISINGTIDEFALLINGSTAR.’ Edwards addresses themes of portraiture and performance while Hoare considers Gallagher’s work in relation to the greater scope of marine and whaling history.

‘It took me a long time to get here. I swam through libraries like a cormorant and I sank to the bottom of the sea to feed on what I found there. I resurfaced with jewels on my skin like anemones. My life clung to me like my past. I never knew death could undo so many. I crossed many borders and many beaches to reach this place. Tattooed lascars and ketelbinkies showed me the way with their tears. The worms bored into the decks and bones. I slept under the focsle, where I heard the dolphins whistle and click as they rode the invisible wave we made ahead of us, separating me from the ocean. They were my pillows, the sea my eiderdown. I climbed the rigging and looked into the dizzying vortices, through transcendent dreams.

Down there, in the limpid darkness, shapes moved and coalesced, in and out of existence, far from the brightness of the sun. Coke cans rolled on the bottom of the abyss, while Newton measured out the enlightenment. They kept on falling, falling, falling. And I fell with them too, past wondrous weeds and strange slimy things, till I came to my rest, in the perpetual light, glowing like an extinguished star.’

Animate and inanimate, the sea itself is an accidental record. Of what is seen and not seen; what is cut out and what is left behind. It obscures as it reveals, intangible and yet utterly sensual. Always the same, and always changing, its substance itself has an age, and its water, a history. Its organisms slip and evolve and change, as if evolution were speeding up in those dark, fertile depths, shifting shape and gender at will. It is vaster parallel natural history to our human history; its life does not even require our sun to sustain it.

Beneath what Herman Melville called ‘the ocean’s skin’, manifold stories predate and postdate our human sway. We now know that cetaceans such as whales and dolphins possess their own culture; that, like us, their evolution is affected by that culture, as much as by instinct; a matriarchal culture, passed down matrilineally. They share those waters - which constitute three-quarters of our planet’s surface and contain 90% of its biomass - with simple yet complex forms such as jellyfish, which change gender even as they seem to change shape.

To make a record of the sea seems a folly. How can you contain such a vast fluid environment? The sea does not care about us. It gives life as it takes life. As I write, thousands of migrants are crossing the seas in search of a better life. Their stories echo the other lives down here. In a 1962 film of Melville’s Billy Budd, the tyrannical Claggart declares, ‘The sea is calm you said. Peaceful. Calm above, but below a world of gliding monsters preying on their fellows. Murderers, all of them. Only the strongest teeth survive. And who’s to tell me it’s any different here on board or yonder on dry land?’ Elsewhere, in Moby-Dick, as he launches out, bound for the freedom of the Pacific’s South Seas, Ishmael tells us, ‘Who aint a slave? Tell me that’.

In Turner’s paintings of slave ships and whalers, we see history stilled: the deadly triangular trade in humans from Africa to European to the Caribbean; the fatal trade in whales. In Gallagher’s masked palimpsests, the sea waves over and over again, leaving behind its deposits even as the artist carves out her work like scrimshaw, rubbing and sculpting, erasing and restoring. Working on the quays and docklands of the Atlantic, on either side of an ocean whose stories she tells, she records abuses and beauties, species and culture, human and natural history entwined in her personal story and that of the future, present and past.

The sea does not care. It shifts and changes as Gallagher looks on. The northern light on southern skins. The undertow, the sound that travels for thousands of miles, the transformation of eyes into pearls and bones into corals. Water that may be four hundred or four thousand years old. Animals and systems that live as long. The depths plumbed by the Challenger expedition, circumnavigating the oceans with its crew of 250 seamaddened men while its parrot cried, ‘What? Two thousand fathoms and no bottom?” On Gericault’s Raft of the Medusa, shipwrecked and attempting to reach the African coast, a lone black figure above the gnawing sharks and cannibalised humans, waving his red revolutionary shirt.

Drexciya, the Detroit electronic duo, wondered if humans could breathe in water; if the children of drowned pregnant African slaves could have given birth to infants that needed no air. Like something out of Shakespeare’s The Tempest, his American, colonial play, they imagined, ‘Are Drexciyans water breathing, aquatically mutated descendents of those unfortunate victims of human greed? Have they been spared by God to teach us or terrorise us? Did they migrate from the Gulf of Mexico to the Mississippi river basin and on to the great lakes of Michigan? Do they walk among us?’ Ariel and Caliban mutate, from stolen people into something rich and strange.

We humans can only understand something by its likeness to something else. But what if no parallels exist? Down there life can exist without us. Its denizens have no need of hands and feet. They feel each other, continually connected by the element in which they swim; they are more in touch than we can ever be. But as we watch from a remote-operating vehicle, eight miles down, where new species are being discovered every month, a Coke can rolls along the ocean floor.

Her work was selected for the 2003 and 2015 Venice Biennale. In 2000, she was awarded the American Academy Award in Art.