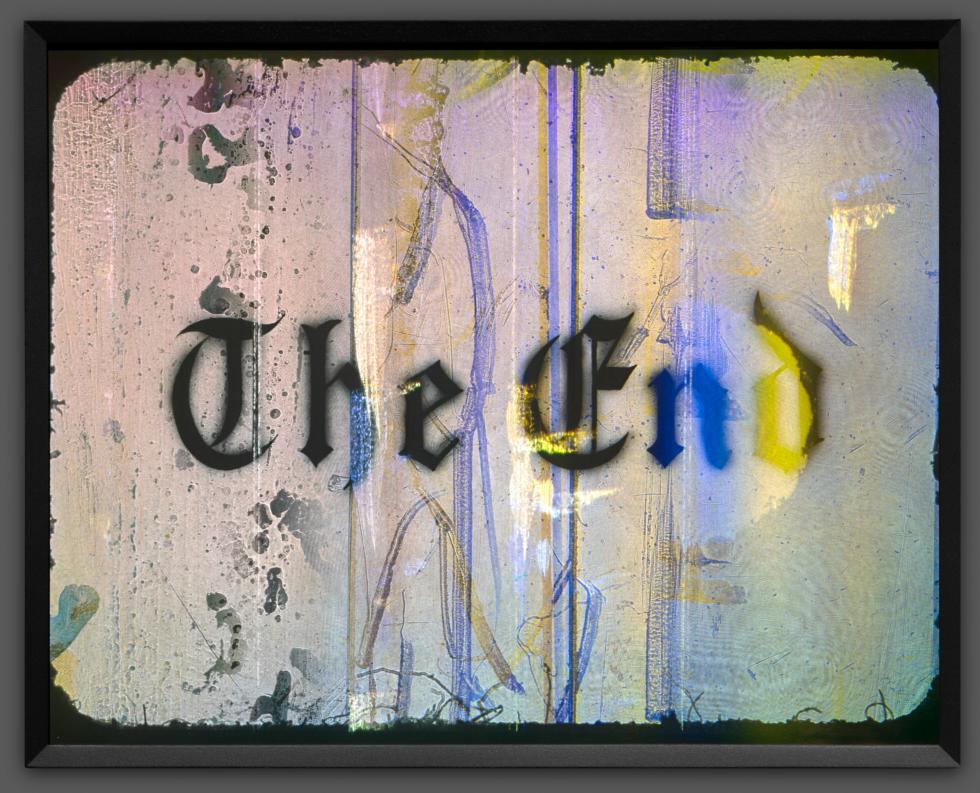 LOS ANGELES – The J. Paul Getty Museum announced today the acquisition of 105 glass plate holograms by 20 artists related to the C-Project, a collaboration developed in the early 1990s between a select group of internationally renowned contemporary artists and holographers who experimented with the hologram process. The acquisition is a donation by the Archival Master Plate Collection, LLC, through Guy and Nora Barron. Mr. Barron joined the C-Project shortly after it was formed in 1994. Coinciding with the donation to the Getty Museum, the Getty Research Institute will receive part of the C-project archive, including research and correspondence, photographs, digital files, VHS tapes and films, and collages. 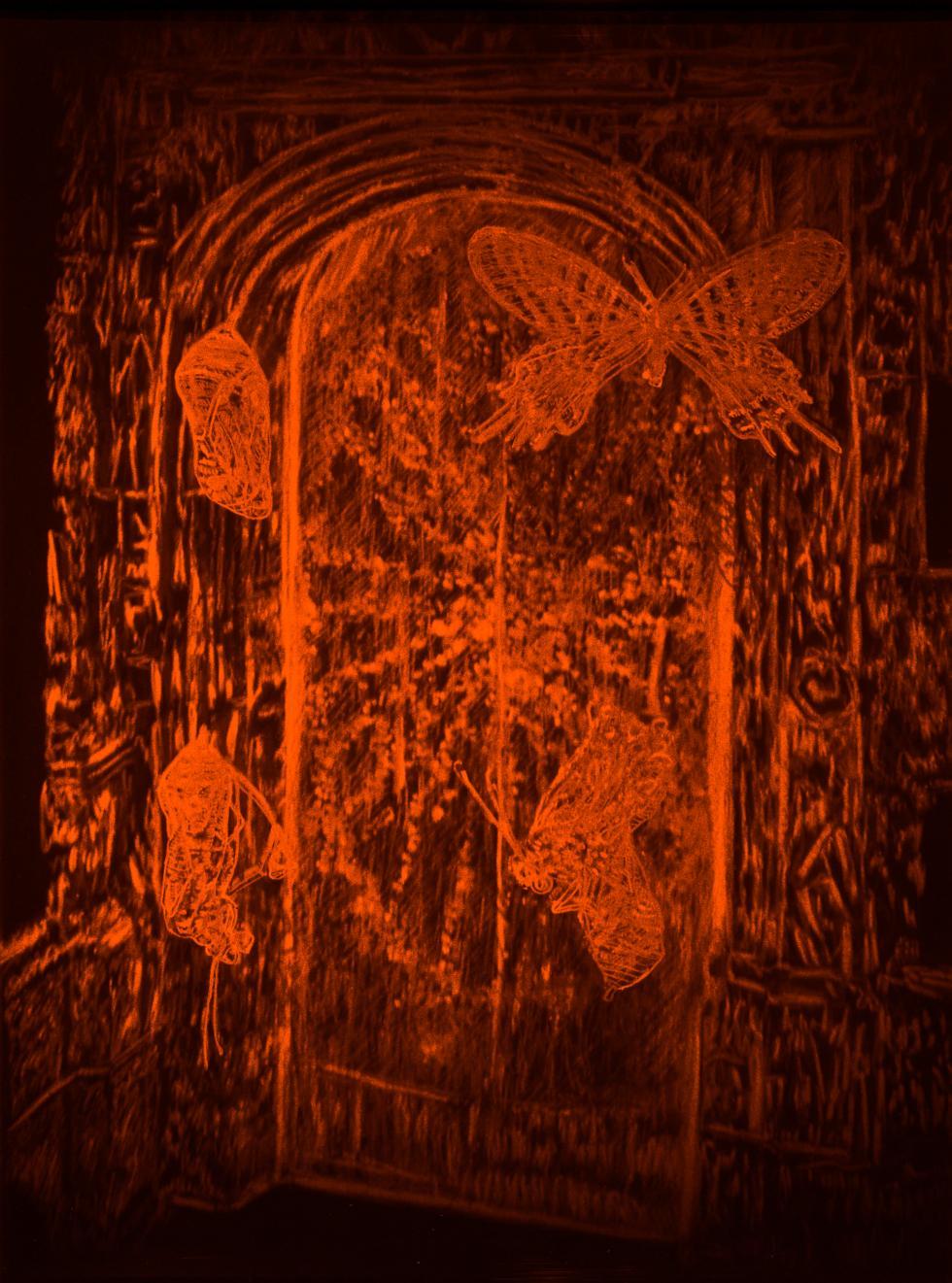 “These captivating works, the first holograms to enter the Getty Museum’s photographs collection, are objects that are both a continuum of traditional silver halide photography developed in the 19th century and a product of laser technology first introduced in the 20th century,” said Timothy Potts, director of the J. Paul Getty Museum. “Each work has been created in a unique way that reflects the artist’s engagement with this innovative medium. I have no doubt that they will stimulate new thinking on the history of photography and holography, and especially the recent resurgence of three-dimensional formats for film and television.” 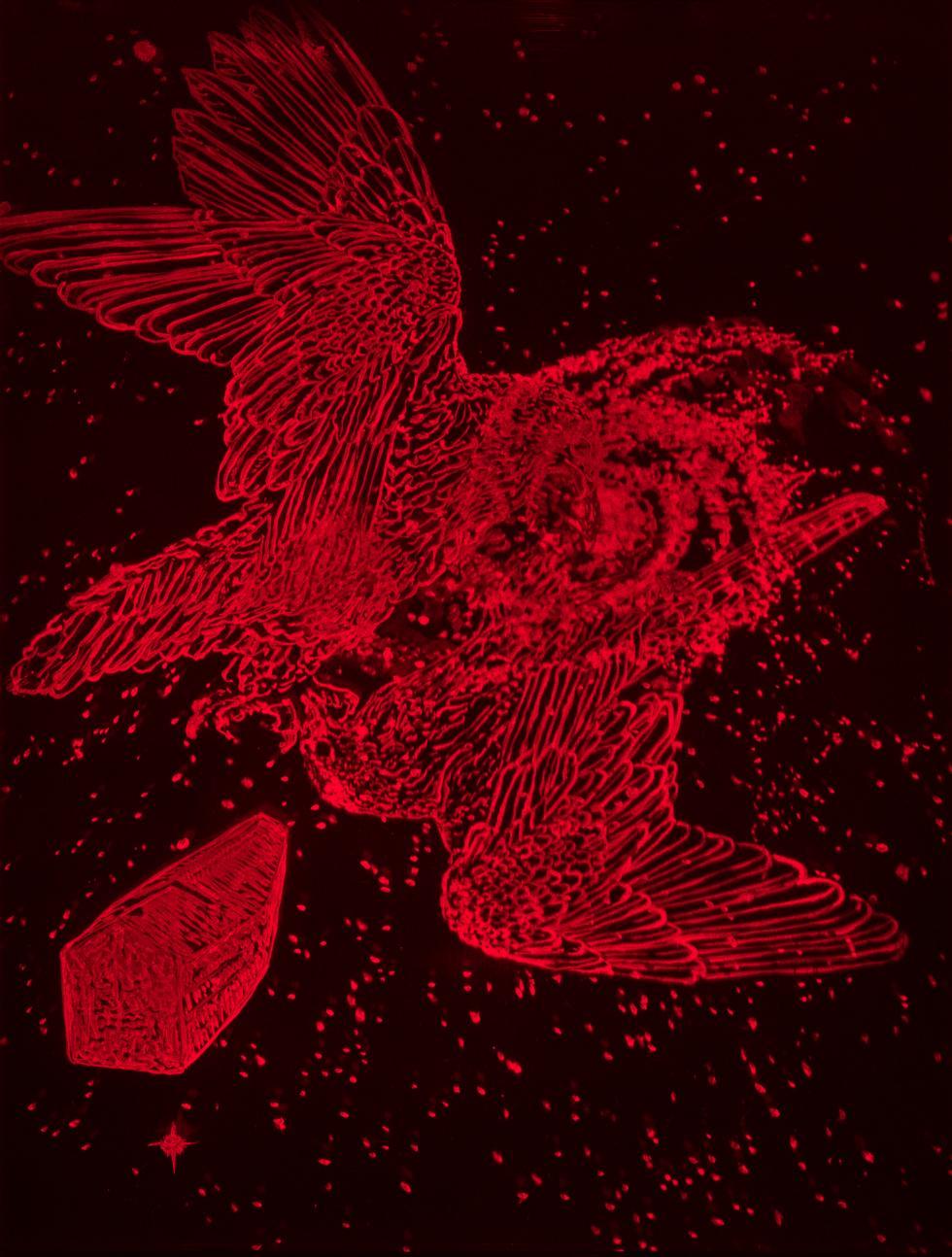 A hologram is an image produced from the interference pattern created when a beam of light reflects off the surface of an object and is crossed with another beam split from a direct light source. When re-illuminated, the interference pattern results in the illusion of a three-dimensional object of full volume. Because the process produces extremely clear images that can hold vast amounts of information, holography’s applications have predominantly been in the fields of science and medical research. Since the 1960s, holography has also been explored by artists interested in the creative possibilities of images that replicate three-dimensionality and deep space in a two-dimensional surface. Renowned conceptual artist Bruce Nauman (American, born 1941) was the first to make and exhibit holograms as art in 1968. The Museum of Holography was founded in New York’s Soho neighborhood in 1976, and had an inaugural exhibition that traveled internationally for more than a decade.

In the 1990s, the founders of the C-Project (in which C stands for the mathematical symbol for “speed of light”), sought to explore the possibilities of this unique medium. The C-Project ceased operations in 1999, at which time H1 master plates (those that are only viewable with directed laser light) and H2 sub-master plates (made through a two-step process from the H1 and viewable in LED light) had been completed by each of the artists working in conjunction with master technicians.

Artist Matthew Schreiber worked closely with each of the artists invited to participate in the C-Project to realize their holograms. In recent years he developed new materials and methods to translate the H1 master plate directly to a “final” hologram on glass. Final editioned holograms were made from the work of Louise Bourgeois, Chuck Close, and Ed Ruscha in 2017. The donation includes selections of the holograms by each of the 20 artists that best represent each artist’s contribution to C-Project, as well as one set of each edition. 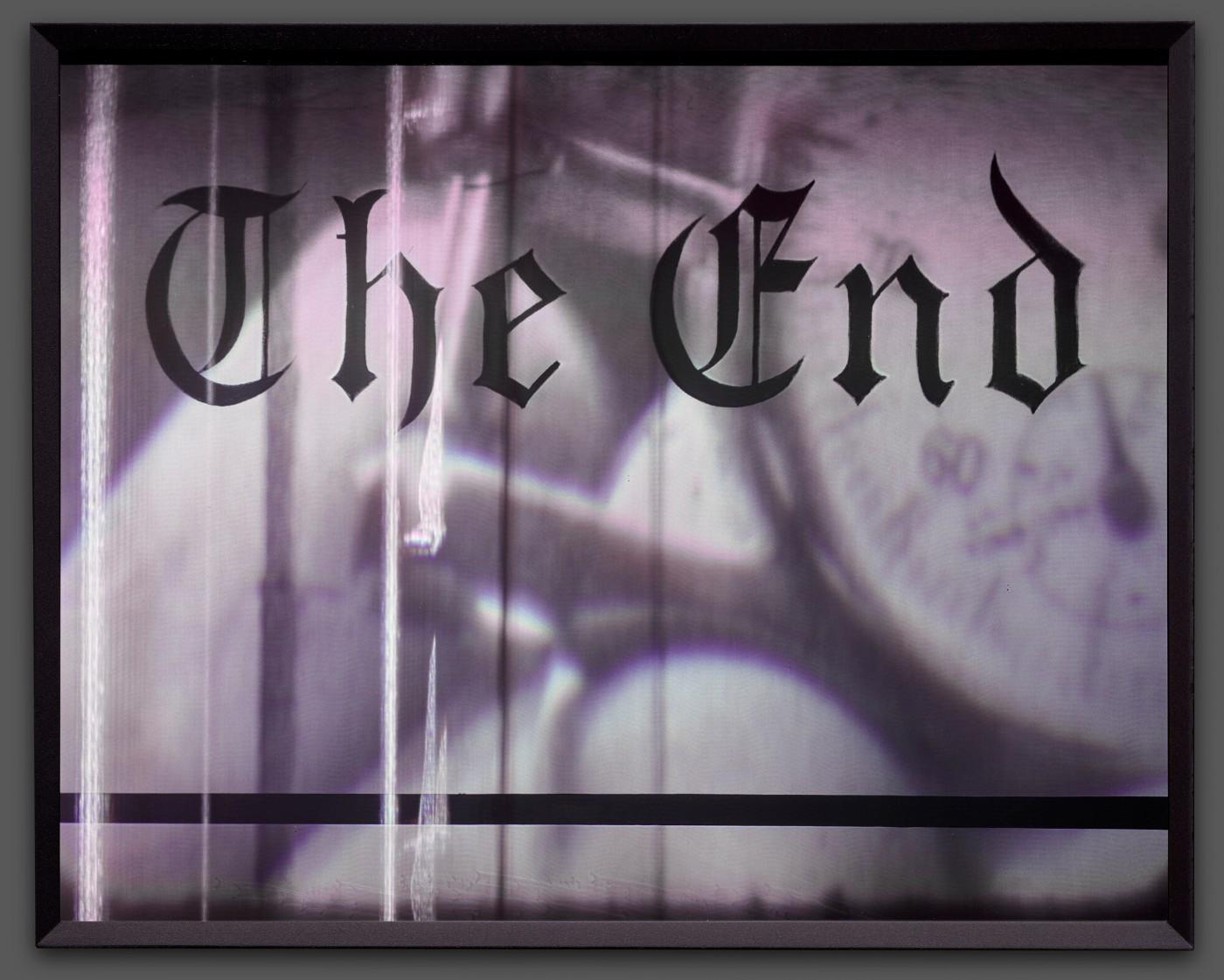 “We are pleased to add these visually compelling and artistically significant holograms of the late 20th century to our photograph collection, which has such great depth in 19th-century stereography, including examples by Carleton Watkins, Eadweard Muybridge, Mathew Brady, Roger Fenton, Francis Frith, and Adolphe Braun,” says Jim Ganz, senior curator of photographs at the J. Paul Getty Museum. “We are grateful to Guy and Nora Barron, who have been passionate collectors of contemporary art for six decades, with an emphasis in the movements of Pop Art, Conceptual Art, and Minimalism. Their identification of the Getty as the appropriate repository for this important group of works enables us to enhance the Museum’s holdings in these areas as well.”

These are the first holograms acquired by the Getty Museum and will establish the Getty Museum as the only institution to hold original glass holograms from the C-Project. In addition to existing works in the collection by Chuck Close and Ed Ruscha, the donation adds a substantial number of contemporary artists to the Getty Museum’s collection. Many of them, including John Baldessari, Larry Bell, Ross Bleckner, Erich Orr, and James Turrell, studied and/or were based in Los Angeles and were members of the Southern California Light and Space movement of the 1960s and 1970s. 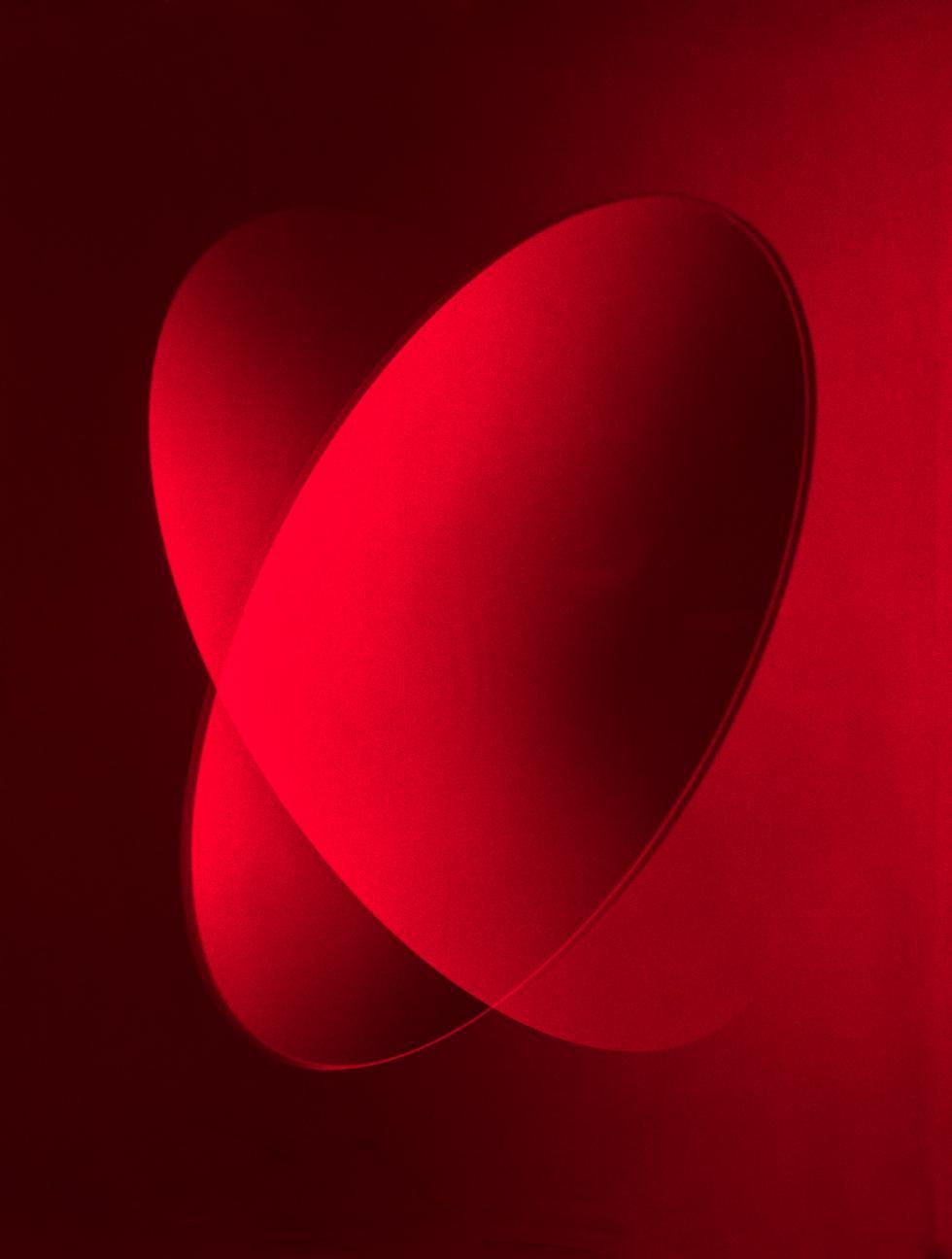 Many of the artists who participated in the C-Project made holograms that incorporated works they had already been producing in other media or reiterated those works in some way. For example, the crisp oval shape suspended in Larry Bell’s hologram plates echoes his multi-colored glass sculptures and luminous geometric paintings, while Ross Bleckner’s painting of falling birds is rendered in three dimensions. Louise Bourgeois found particular resonance between her physically and psychologically demanding sculpture and holography as it added a dimension and sense of movement to her works that she could not otherwise obtain. Other artists, particularly Richard Artschwager, John Baldessari and Ed Ruscha, made works that specifically referenced the magical yet disturbing experience created in viewing a hologram: Artschwager’s two-part painting of a woman in a box sawed in half references a classic magic trick, Baldessari’s Frankenstein subject provides an apt holographic symbol for a “monster” created from both science and art, and Ruscha’s holograms of one-second clips of the end of a film reel linking holography to film lets viewers marvel at a process that can record a span of time within one stationary framed image.

Variants of some of these holographic works have been included in retrospectives of the individual artists and in the 2012 exhibition Pictures from the Moon: Artists’ Holograms, 1969-2008 organized by the New Museum in New York. Plans to exhibit the works and archive materials at the Getty are forthcoming.