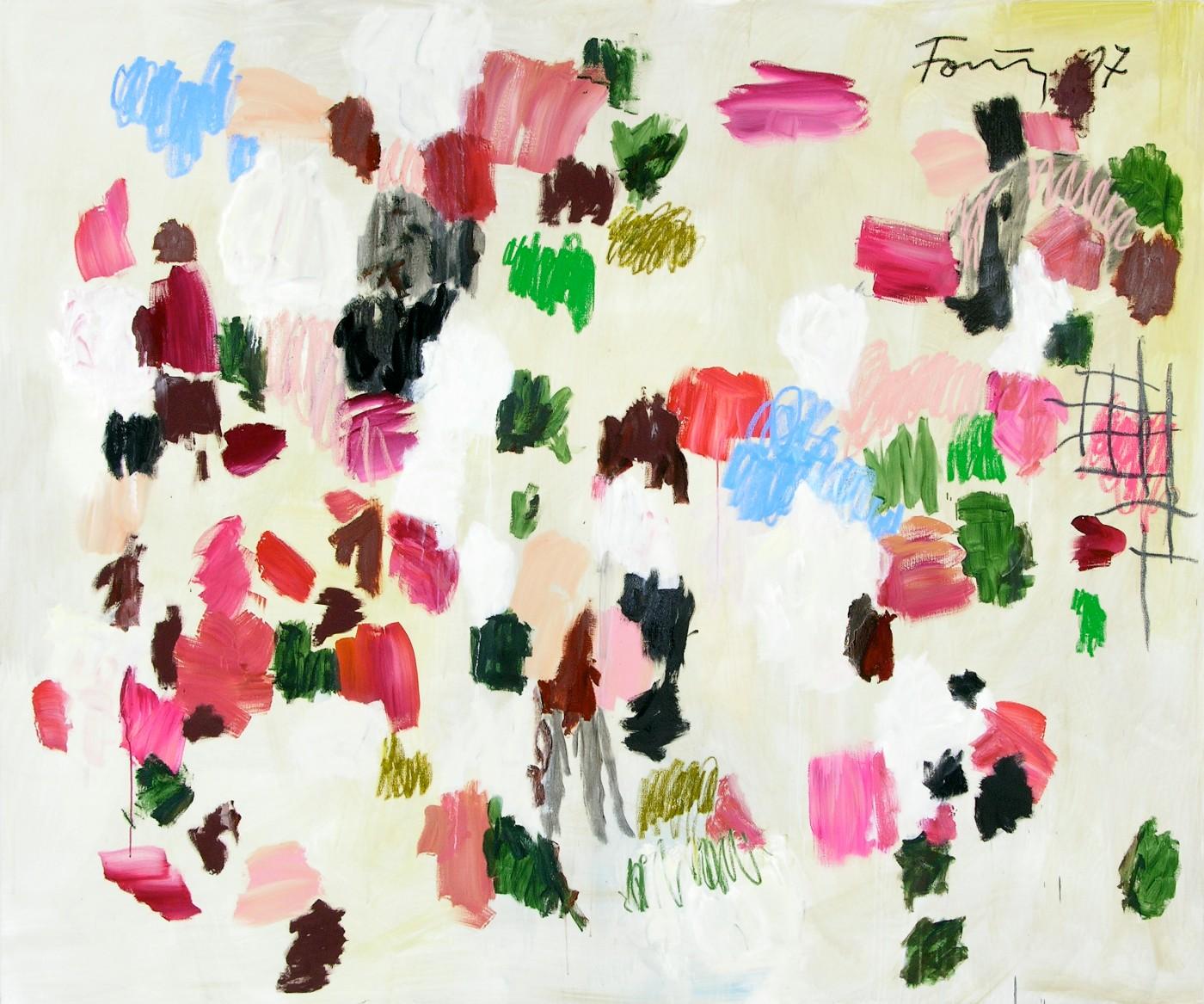 Dallas, TX – The Dallas Museum of Art (DMA) will present exclusively in the US the most comprehensive survey to date for renowned German artist Günther Förg (1952-2013), opening on October 21, 2018 and on view through January 27, 2019. The first American museum exhibition dedicated to the artist in nearly three decades, Günther Förg: A Fragile Beauty, brings together over 40 years of  the artist’s multimedia practice – including work on paper, photography, sculpture, and rarely-exhibited late-career paintings –  to provide new insight on the practice and enduring influence of this extraordinary and complex artist. 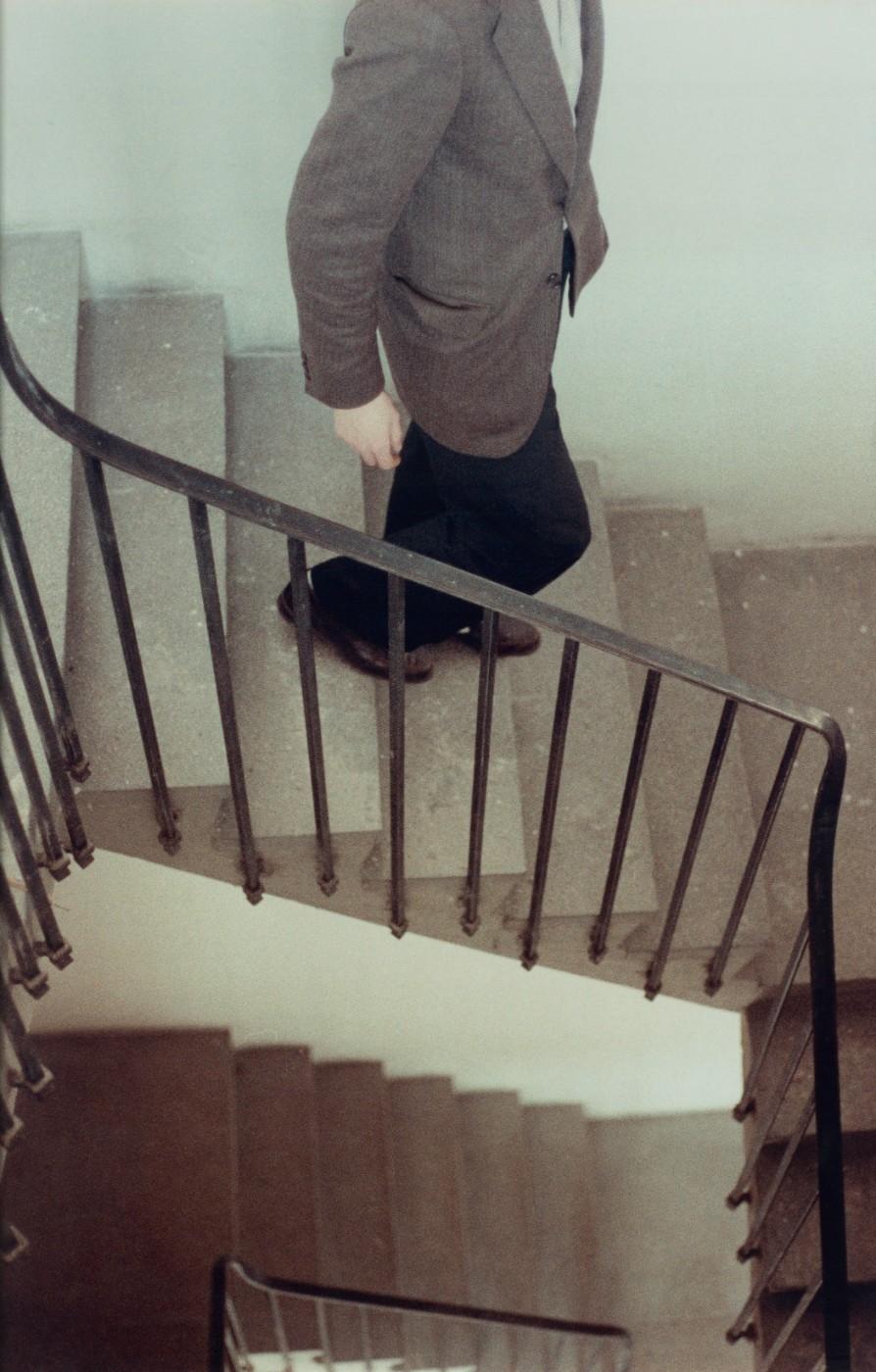 Organized in collaboration with the Stedelijk Museum, Amsterdam and their curator of photography Hripsimé Visser, in close dialogue with the artist’s estate, Günther Förg: A Fragile Beauty builds on both institutions’ histories with the artist, with each having staged seminal exhibitions of his work in 1992 and 1995 respectively. The exhibition includes major loans from private collections such as Deutsche Bank and notable German institutions such as the Städel Museum, Frankfurt and the Staatliche Graphische Sammlung, Munich.

“We are excited to collaborate with the Stedelijk Museum to bring renewed attention to the practice of an artist who has undoubtedly influenced the creative processes of many artists working today,” said the Eugene McDermott Director of the DMA, Dr. Agustín Arteaga. “As a place of discovery and learning, the DMA is proud to share Förg’s vivid work with a new generation of local and national audiences for the first time in nearly 30 years, and to re-ignite dialogue about this fascinating artist.”

While Förg’s multidisciplinary approach has become predominant today in contemporary artists’ practices, it was uncommonly eclectic and provocative in his time. Art historians have grappled with the breadth of his production, and have frequently aligned his work with that of modernist masters such as Barnett Newman, Clyfford Still, Mark Rothko and Edvard Munch, all of whom greatly inspired Förg. There is limited scholarship focused on the artist’s singular contributions, such as his skillful manipulations of the language of abstraction and explorations of the relationships between object and viewer.

Reflecting the incredible scope of the artists’ practice, Günther Förg: A Fragile Beauty traces the development of Förg’s pioneering cross-disciplinary work from 1973 to 2009 to offer a new perspective and deepen understanding and appreciation of the artist’s place in art history. The exhibition pivots around major themes recurrent in Günther Förg’s oeuvre, including his interest in surface and substrate, the grid motif, and color theory. Rather than a broadly chronological view, the presentation creates juxtapositions between series and works demonstrating artistic concerns that the artist returned to throughout his life. 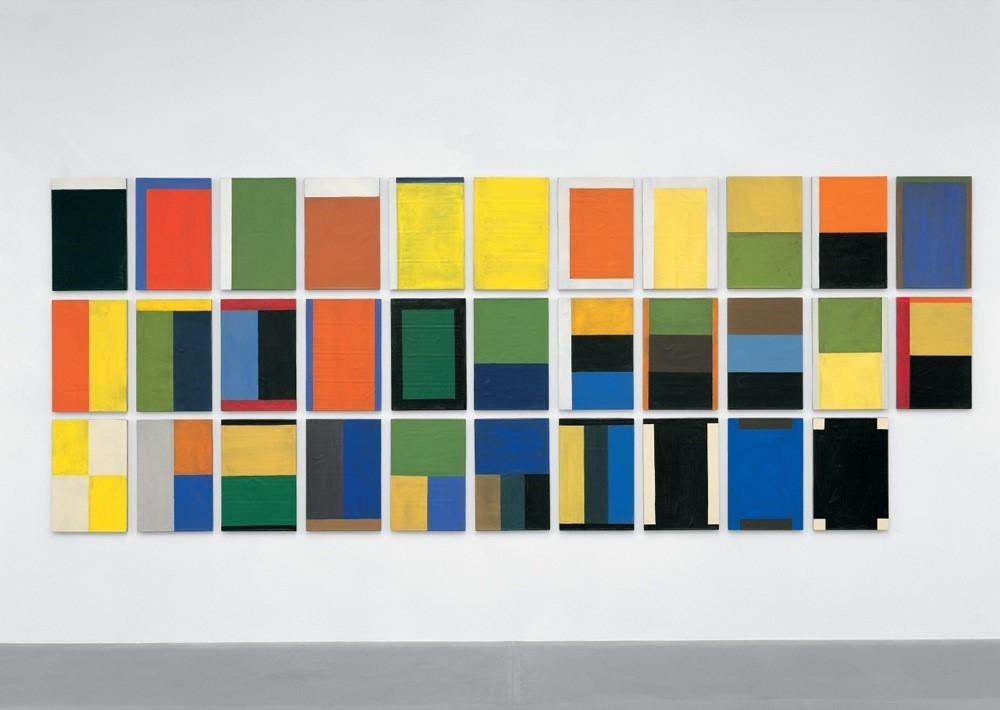 The exhibition begins with a recreation of a seminal wall mural from 1986, as well as a number of the artist’s monochromatic paintings, including an important gray painting from 1973 featuring undecipherable text and a monumental gray grid painting from 2009 that the artist layered over one of his vibrant Spot Paintings. The paintings feature both exquisitely sensitive surfaces and a gestural, improvised quality found across the artist’s work, encouraging further investigation into the artist’s explorations of the instability between image and reality. The exhibition also includes many of the artist’s multimedia paintings, such as a multi-panel work of painted lead, which is presented alongside a large diptych featuring acrylic and gold leaf. As with many of the artist’s paintings, these materials impart distinct textures and compositional elements that create tension between surface and substrate. 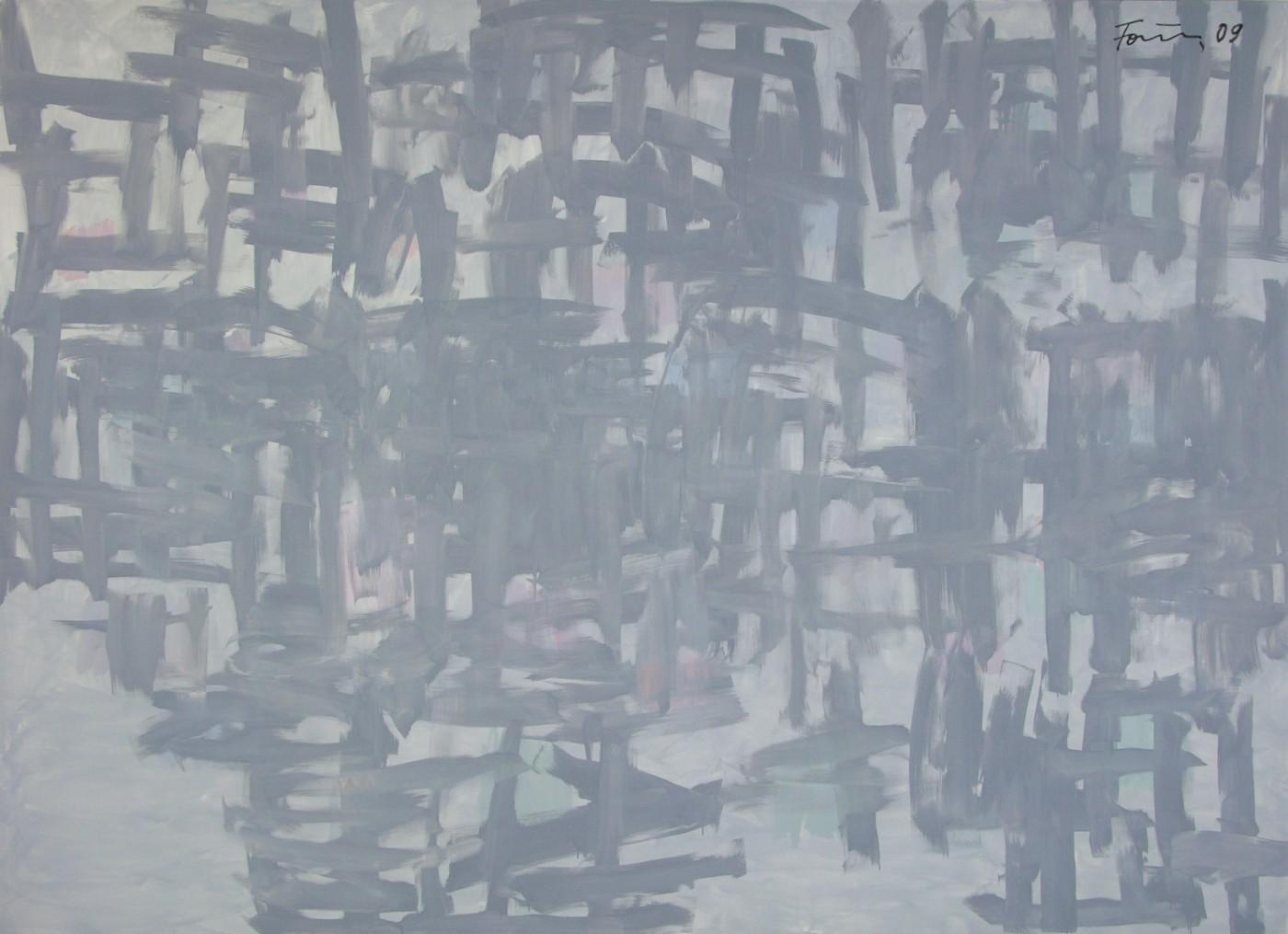 A similar tension is prevalent in Förg’s sculptural work, where bronze masks flout a fine line between figuration and abstraction. Five plaster and mixed media sculptures from 2000 are featured in the exhibition. Many are composed of found household objects enshrouded in plaster, relinquishing their original forms to the amorphous plaster encasement.

Though he is most often recognized for these formal innovations, Förg also had an interest in architecture and history, as evidenced by his photographic works. Twelve photographs are featured in the exhibition, ranging in subject from portraits to modernist edifices in Italy from the 20’s and 30’s. His documentation of building elements like stairwells, windows, and portals – often depicting the artist – are framed behind reflective glass. When viewed in an installation setting and paired with framed mirrors of the same scale, these works mimic architectural features and create interruptions within the space. As with all of Förg’s work and installations, the individual works are regarded as part of a whole, merging photography with wall paintings and sculpture to activate a space with specificity to site.

Concluding the exhibition is a group of the artist’s late works, Förg’s Spot Paintings from 2007 to 2008, signaling his return to painting to manifest the expressive freedom he allowed himself towards the end of his life. These distinctive paintings feature large swathes of color on white ground, which lay bare the artist’s gesture and emphasize the activity of painting itself.

Günther Förg: A Fragile Beauty will be accompanied by a full color, 250-page catalogue designed by Joseph Logan and distributed by Yale University Press. The catalogue will be the first major publication dedicated to the artist since his passing in 2013, and includes contributions by Kirsty Bell, Gavin Delahunty, Lisa Le Feuvre, Liam Gillick, Megan Luke, Lauren Richman, Beatrix Ruf, Jeffrey Saletnik and Matthew Witkovsky. The exhibition catalogue is underwritten by Editions Traverses Sàrl.

Concurrent with this exhibition, the DMA will present a special installation of works by German artists in the Museum’s collection to contextualize Förg’s practice. Over the past 25 years, the Dallas Museum of Art has emerged as a leading US institution in collecting and exhibiting postwar German art. Förg’s work was featured in the Museum’s Encounters series in 1992, and solo exhibitions of German artists Sigmar Polke and Thomas Struth followed in the decade to come. These years also saw the exponential growth of Museum holdings in this area.  This installation brings together a selection of editions and paintings by Gerhard Richter, including three new acquisitions, along with works by Polke, Struth, and Jörg Immendorf. The Richter editions and Struth photograph on view came into the collection through the support of TWO x TWO for AIDS and Art, a fundraiser that equally benefits the DMA’s contemporary collection and amfAR, The Foundation for AIDS Research, and this year marks the twentieth anniversary of that fundraiser.

“The Deutsche Bank Collection is one of the most substantial collections of international contemporary works on paper and photography. As a collector of Förg’s work for over 30 years, we are proud to serve as a Major Sponsor and lender to this new exhibition,” said Michael Jacoby, Managing Director, Deutsche Bank Wealth Management.  Thorsten Strauss, Deutsche Bank’s Global Head of Art, Culture & Sports added: “Our corporate collection serves as an important platform for us to promote cultural diversity, inspire innovation, and provide access to quality arts experiences around the globe.”

Günther Förg was born in 1952 in Füssen, Allgäu, Germany, and studied at the Academy of Fine Arts in Munich between 1973 and 1979. During his years at the Academy, he created almost exclusively monochromatic work, contrary to the brightly saturated abstract series for which he is most known. In the 1980s, he began experimenting with photography in addition to his paintings, sculptures, and graphics, focusing on capturing international Bauhaus architecture. He pioneered a cross-disciplinary approach that often engaged several types of media, tackling the latent instability between image and reality through the abstract. In addition to the Dallas Museum of Art and the Stedelijk Museum, Amsterdam, Förg had his work exhibited at documenta IX; Deichtorhallen, Hamburg, Germany; Langen Foundation, Neuss, Germany; Kunstmuseum, Basel, Switzerland; Kunsthalle, Bremen, Germany; Tel Aviv Museum of Art, Israel; Deutsche Guggenheim, Berlin, Germany; Musée d’art moderne de la ville de Paris, France; and Touko Museum of Contemporary Art, Tokyo, Japan.