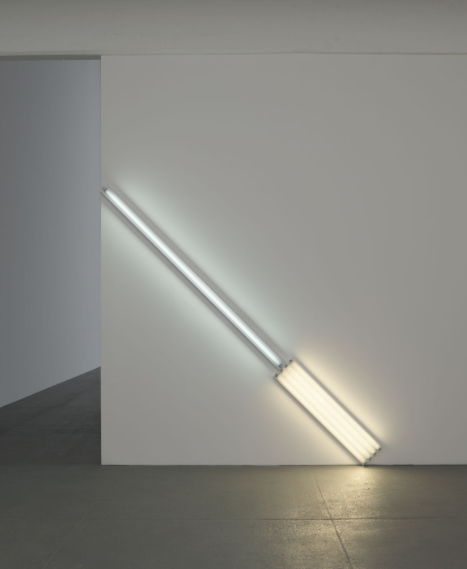 David Zwirner is pleased to present Dan Flavin: in daylight or cool white at its 537 West 20th Street gallery. The exhibition will examine Dan Flavin’s use of different variations of fluorescent white light, focusing on significant works from the 1960s. The title refers to Flavin’s seminal text “‘… in daylight or cool white.’ an autobiographical sketch,” first published in the December 1965 issue of Artforum.

Beginning in 1963, when he conceived the diagonal of May 25, 1963 (to Constantin Brancusi), a single gold, fluorescent lamp installed diagonally on a wall, until his death in 1996, Flavin produced a singularly consistent and prodigious body of work that utilized fluorescent light to create installations (or “situations,” as he preferred to call them) of light and color.

Throughout his career, Flavin experimented with the subtly chromatic and perceptual possibilities afforded by the commercially available variations of “white” fluorescent light (cool white, daylight, warm white, and soft white). The exhibition will include key works from 1963 to the early 1970s, encompassing a period of radical experimentation for the artist and presenting the range of variation he was able to achieve in his constructions. The works from this pivotal first decade of his exploration of ready-made, commercially produced lamps exemplify and distill—in this restricted palette—his minimal and conceptual approach. Seen together, these works show the varied and nuanced ways in which Flavin’s light constructions establish and redefine the surrounding architecture.

On view will be the diagonal of May 25, 1963 (1963), a soft white iteration of Flavin’s first use of fluorescent light alone; and the nominal three (to William of Ockham) (1963), which consists of an additive system of six fluorescent lamps, installed in intervals of one, two, and three vertical 8-foot lamps. Dedicated to the medieval English theologian and philosopher William of Ockham, this work established the use of elemental systems and progressions that would preoccupy Flavin throughout his career. As the artist noted in 1963, “With the nominal three I will exult primary figures and their dimensions. Here will be the basic counting marks (primitive abstractions) restated long in the daylight glow of common fluorescent tubes.”1

Other works on view combine different variations of white light, such as alternate diagonals of March 2, 1964 (to Don Judd) (1964), which experiments with the distinct effects of daylight and cool white lamps. Also included in the exhibition will be untitled (1964), a curving arc of seven 2-foot fixtures. The work was first presented in Flavin’s 1966 solo exhibition at Galerie Rudolf Zwirner, Cologne, and comprises a rare curved format for the artist, extending from the wall on the floor into the exhibition space.

Significant early examples of Flavin’s “monuments” for V. Tatlin will be included. Dedicated to the Russian Constructivist Vladimir Tatlin, this sustained series of work by the artist explored different configurations of cool white fluorescent light. Like other artists in the 1960s, Flavin appreciated the Russian Constructivists for their quest to express revolutionary social and political attitudes in a language of pure abstraction, which, particularly in Tatlin’s case, emphasized the use of real materials (tin, wood, iron, glass, plaster) in three-dimensional space. Flavin’s “monuments” embody what he described as his goal of working on “a sequence of implicit decisions to combine traditions of painting and sculpture in architecture with acts of electric light defining space.”2

Dan Flavin’s (American, 1933–1996) first solo exhibitions were held at the Judson Gallery in 1961 and the Green Gallery in 1964, both in New York. His first European exhibition was in 1966 at Galerie Rudolf Zwirner in Cologne; and in 1969, the National Gallery of Canada, Ottawa, organized his first major museum retrospective. His work was included in a number of key early exhibitions of Minimal art in the 1960s, among them Black, White, and Gray (Wadsworth Atheneum Museum of Art, Hartford, Connecticut, 1964); Primary Structures (The Jewish Museum, New York, 1966); and Minimal Art (Gemeentemuseum, The Hague, 1968). Flavin’s work would continue to be presented internationally over the course of the pursuant decades at such venues as the Saint Louis Art Museum (1973); Kunsthalle Basel; Museum Boijmans Van Beuningen, Rotterdam (both 1975); Stedelijk Museum, Amsterdam (1986); and the Solomon R. Guggenheim Museum, New York (1992), among others.

A major museum retrospective devoted to Flavin’s work was organized, in cooperation with the Estate of Dan Flavin, by the Dia Art Foundation in association with the National Gallery of Art, Washington, DC, where it was first on view in 2004. The exhibition traveled from 2005 to 2007 to the Modern Art Museum of Fort Worth, Texas; Museum of Contemporary Art, Chicago; Hayward Gallery, London; Musée d’Art Moderne de la Ville de Paris; Bayerische Staatsgemäldesammlungen, Pinakothek der Moderne, Munich; and the Los Angeles County Museum of Art.

Flavin’s work was on view in solo exhibitions at the Pulitzer Foundation for the Arts, St. Louis (2008), and David Zwirner, New York (2009). In 2012, the Morgan Library and Museum, New York, presented a retrospective of the artist’s drawings and, from 2012 to 2013, a retrospective exhibition of his work traveled from the Museum Moderner Kunst Stiftung Ludwig, Vienna, to the Kunstmuseum St. Gallen, Switzerland. Artist Rooms: Dan Flavin traveled from 2013 to 2014 from Tate Modern, London, to Gracefield Arts Centre, Dumfries, Scotland. Dan Flavin: Corners, Barriers and Corridors, featuring significant works from the late 1960s and early 1970s, was on view at David Zwirner, New York, in 2015. In 2016, Ikon Gallery, Birmingham, England, presented Dan Flavin: It is what it is and it ain’t nothing else.

A major permanent installation of the artist’s work can be found in Marfa, Texas, and another long-term installation can be seen in Bridgehampton, New York, where in 1983 Flavin began renovating a former firehouse and church to permanently house several of his works and to serve as an exhibition space and printmaking facility for local artists. The building was named the Dan Flavin Art Institute and is maintained by Dia Art Foundation.