David Hockney: Something New in Painting (and Photography) [and even Printing] at Pace Gallery 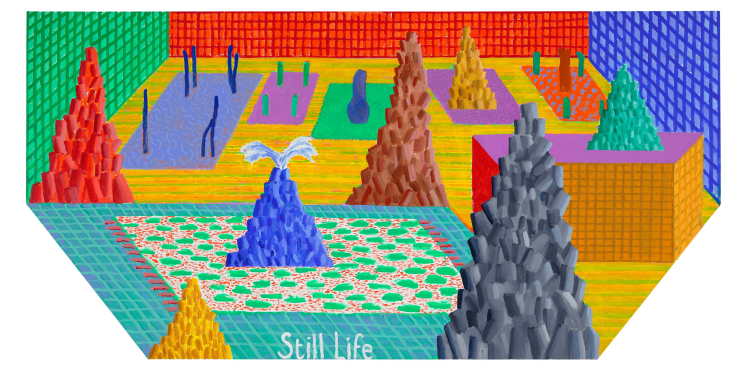 David Hockney: Something New in Painting (and Photography) [and even Printing]

New York—Pace Gallery is pleased to present an exhibition of new works by David Hockney. Following the artist’s celebrated traveling retrospective at Tate Britain, the Centre Pompidou, and the Metropolitan Museum of Art, Pace’s exhibition Something New in Painting (and Photography) [and even Printing] will be on view from April 5 to May 12, 2018 at 508/510 West 25th Street, with a public opening held on Thursday April 5 from 6:00 – 8:00PM. Pace will publish a catalogue to accompany the exhibition that includes an essay by art historian and Hockney scholar Lawrence Weschler.

The exhibition includes 18 new paintings, the majority of which are painted on hexagonal canvases. The works depict a wide range of subjects – from the deck of the artist’s Hollywood Hills home to Nichols Canyon all the way to the Grand Canyon and East Yorkshire with fantasy landscapes along the way. The varying subject matter, often reprises of earlier work, do not recede to a single vanishing point but instead are all depicted in reverse perspective. Having continually experimented with the representation of three-dimensional space, the hexagonal canvases add a structural element to the artist’s efforts to transcend the limitations of conventional perspective.

As its title suggests, the exhibition will also include two of the artist’s latest works in computer manipulated photography. A continuation of his earlier work with composite polaroids and multi-screen videos, Hockney has digitally combined photographs taken from many perspectives into single monumental images. As in the exhibition’s paintings, the composite photographs do not follow the dogmatic logic of single point perspective but instead embrace multiple experiences of space. Having always been interested in new media, these two monumental prints are an exciting extension of Hockney’s experimentation with reverse perspective into other media beyond painting.

David Hockney (b. 1937, Bradford, United Kingdom) has produced some of the most vividly recognizable images of this century. Hockney’s ongoing exploration of figuration and abstraction reveals a fundamental interest in the representation of pictorial space. His aesthetic pursuits stretch across a vast range of media, from the traditions of painting and printmaking to full-scale opera stagings, photographic collage, and the incorporation of digital technologies such as fax machines, video, and iPads. Spanning practice and theory, Hockney’s investigation of artistic techniques has also developed through art-historical research, resulting in Secret Knowledge (2001), his publication on the optical devices used by the Old Masters, as well as A History of Pictures: From the Cave to the Computer Screen (2016), written in collaboration with art critic Martin Gayford and further exploring the many ways artists have pictured the world.

Hockney has received accolades throughout his career, including nine honorary degrees from academic institutions worldwide. Among his honors, Hockney received a Guinness Award (1961), was elected Associate Member of the Royal Academy of Arts in London (1986), and made an Associate Member of the Academie Royale, Brussels (1987). He was made a Foreign Honorary Member by the American Academy of Arts and Sciences, Cambridge, Massachusetts, in 1997. In the same year was awarded the Order of the Companion of Honour by Queen Elizabeth II, as well as the Culture Prize of the German Society for Photography, Germany’s highest award in the field of photography. In 2003 he was bestowed with the Lorenzo de Medici Lifetime Career Award at the Florence Biennale. Hockney was appointed to the Order of Merit by Queen Elizabeth II in 2012 and has been asked to design a 20 foot by 6 foot stained-glass window for Westminster Abbey in Her Majesty’s honor.

Pace is a leading contemporary art gallery representing many of the most significant international artists and estates of the twentieth and twenty-first centuries.

Under the leadership of President and CEO Marc Glimcher, Pace is a vital force within the art world and plays a critical role in shaping the history, creation, and engagement with modern and contemporary art. Since its founding by Arne Glimcher in 1960, Pace has developed a distinguished legacy for vibrant and dedicated relationships with renowned artists. As the gallery approaches the start of its seventh decade, Pace’s mission continues to be inspired by our drive to support the world’s most influential and innovative artists and to share their visionary work with people around the world.

Pace advances this mission through its dynamic global program, comprising ambitious exhibitions, artist projects, public installations, institutional collaborations, and curatorial research and writing. Today, Pace has ten locations worldwide: three galleries in New York; one in London; one in Geneva; one in Palo Alto, California; one in Beijing; two in Hong Kong; and one in Seoul. Pace will open a new flagship gallery in New York, anticipated for completion in fall 2019. In 2016, Pace joined with Futurecity to launch Future\Pace—an international cultural partnership innovating multidisciplinary projects for art in the public realm