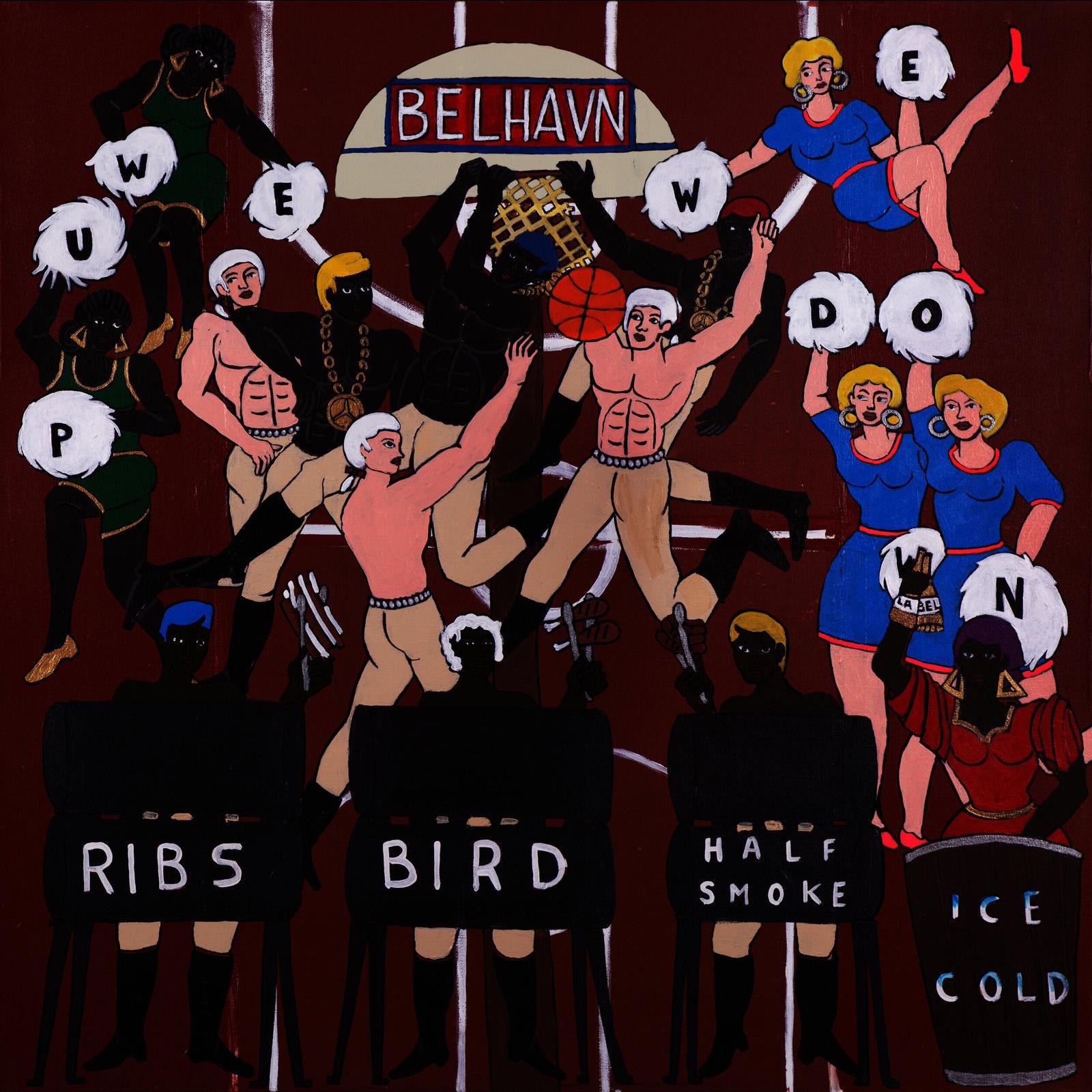 Umar Rashid, We up. We down. The Belhaven Invitational Basketball tournament and cook out ends in defeat for the Irish indentures at the hands of Supreme Team Tobacco. The historical origin of the half smoke, 2021. Acrylic & spray paint on canvas 36 x 36 in (91.44 x 91.44 cm)

Presented in a solo exhibition on view September 24 – November 21, the focus of Rashid’s residency has been producing the latest installment of his massive fictional universe 18 years in the making: “an alternative, feudal version of America that has nobility and titles.” Within this world, Rashid whimsically imagines the cultural intricacies of Colonial Era class dynamics through cross-generational iconography, maps, cosmological diagrams, Afrofuturistic sensibilities, and pop culture references from his upbringing, such as the Golden Age of hip hop.

The exhibition, Culinarialism, specifically focuses on class dynamics of food while poignantly acknowledging the DC area’s problematic history as an epicenter of inhumane international trade practices. The show utilizes the narrative framework of a ritzy dinner party attended by colonizers and visiting global dignitaries—the ultimate embodiment of how food that’s available exclusively to a privileged class has always reached their plates at immense human and environmental cost. While researching during his residency, Rashid learned about harmful recurrences that span history, from mass enslavements for the sole purpose of food production, to various iterations of the contemporary issue of how quinoa was an Andean nutrition staple until global trends drove prices up to an extent that precluded its regional accessibility.

In the events depicted across the exhibition’s 17 works, Rashid punctuates the wealthy dignitaries’ feast with an uprising led by enslaved people. The show’s six large paintings, which feature anachronistic pop culture references like a game of basketball and a barbeque, detail various sequential stages of the event: the preparation and reception of goods; the hunting of animals; the parties and dancing; the meal itself; and the uprising that ends the festivities, assisted in part by divine intervention from the Yoruba gods. The second grouping, eleven wood-mounted, ink-on- paper works that have undergone a tea-pigment aging process, includes smaller pieces like regional maps and portraits of Belhaven (the fictional region’s titular colonizer) and his associates, as well as portraits of the opposition movement’s leadership.

Said Rashid, “The main focus of my work is the stories and reinvented histories of people of color, who are oftentimes marginalized and omitted from the historical record—and the intricacies of race, gender, class, and overall power in the colonial world.” In his work, “iconography serves as a place marker between past, present, and future.” His narratives are “massively informed by the Golden Age hip hop culture of [his] youth,” as well as various pop culture references ranging from ancient to contemporary. “Gang and prison culture, as well as specific revolutionary movements throughout time, also influence my work.”

Regarding the show’s specific commentary on food within his larger exploration of class dynamics, Rashid remarked: “The entire history of food is an ancient colonial enterprise that originated in the ancient world and continues until this day. Greed, complicity, and duplicity plague us all and prevent us from creating not a perfect union, rather a palatable union.”

Addressing the harsh, present-day realities that further informed the exhibition’s development, Rashid explains: “In this age of relative plenty, the majority of people find it inconceivable that everything that is seen hasn’t always been there. The economics of food production have changed very little from the colonial age despite the fact that some countries have adopted a more scientific approach to crop rotation, vertical farming, and limiting overgrazing of livestock. Yet still, desertification from overgrazing, poisoning of lakes and rivers from fertilizers create algae blooms, zootrophic diseases infest the livestock and become transmissible to humans. There’s the gross waste and mismanagement of arable land to grow a single crop for profit, resulting in devastation of the land and ecosystems, and in some cases widespread death from famine and overwork. Apathy? Or a general lack of attention being paid? And every once and a while, there’ll be a story on the human cost of commercial farming. No one cares, as long as the grocery is open until 9 pm.”