Corot's Women Star in Major Exhibition at the National Gallery 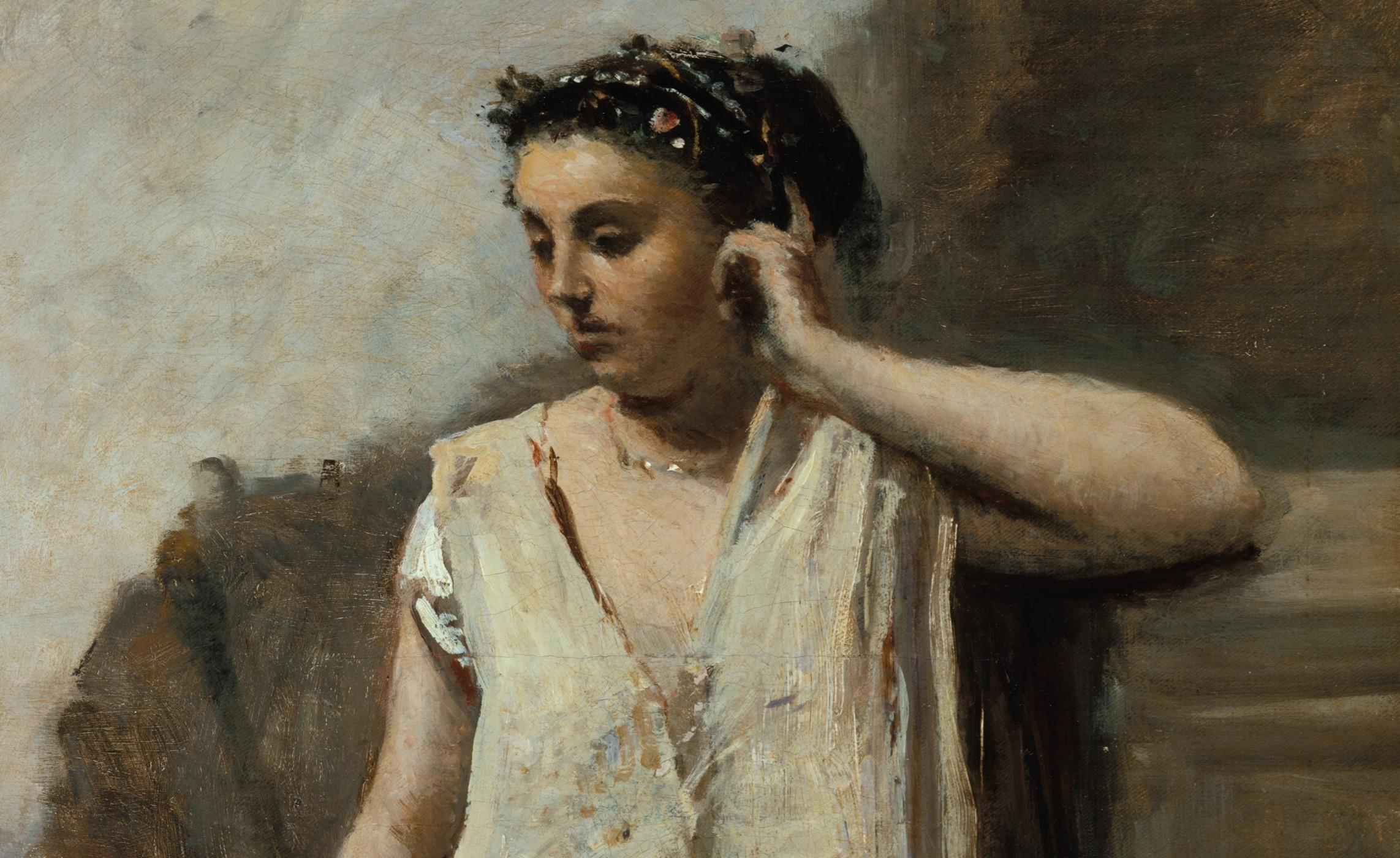 Washington, DC—Dressed in rustic Italian costume or nude on a grassy plain, rendered with a sophisticated use of color and a deft, delicate touch, Corot's women convey a mysterious sense of their inner lives. Corot: Women features 44 paintings created between the 1840s and the early 1870s: nudes, individual figures in costumes, and an allegorical series of the model in the studio. The National Gallery of Art is the only venue for Corot: Women, on view from September 9 through December 31, 2018. 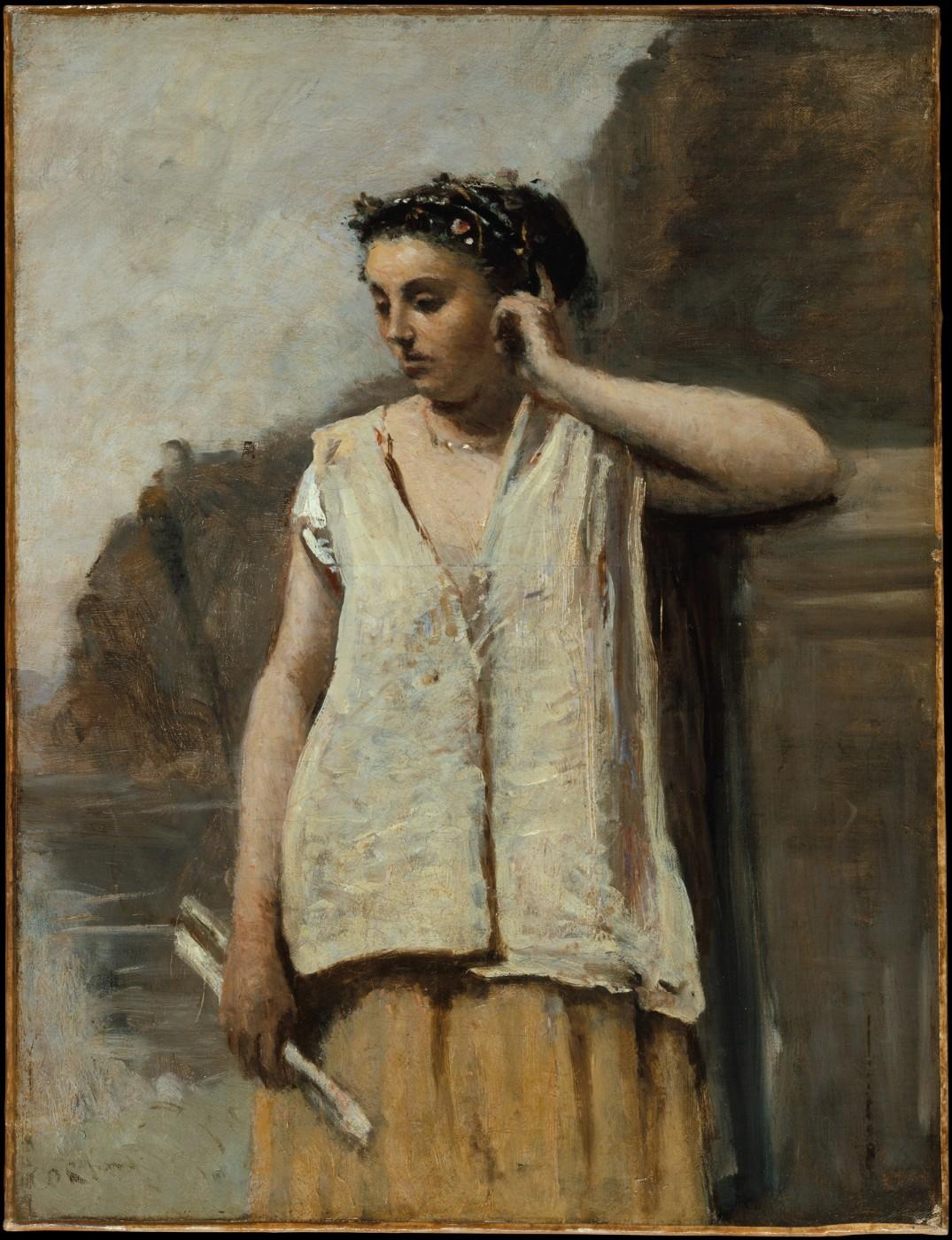 "Recognized as a great master of landscape painting, Corot is among the best represented artists in the Gallery's collection of 19th-century French art. This unique exhibition presents an opportunity to examine a smaller and less well-known aspect of his career," said Earl A. Powell III, director, National Gallery of Art. "We are grateful to The Edwin L. Cox Exhibition Fund, as well as Leonard and Elaine Silverstein, who helped to make this exhibition possible."

One of the greatest landscape painters of the 19th century, Jean-Baptiste-Camille Corot (1796–1875) bridged the French neoclassical tradition and the impressionist movement of the 1870s. His figure paintings constitute a much smaller and less well-known portion of his oeuvre, but are of equal importance to the history of art, in particular for the founders of modernist painting, such as Paul Cézanne, Pablo Picasso, and Georges Braque. Corot: Women both distills and expands upon the Musée Marmottan's exhibition Corot: The Painter and His Models (Paris, February 8–July 22, 2018).

Corot: Women focuses on Corot's images of women painted throughout his career but rarely exhibited in his lifetime. Corot's figural oeuvre is comprised largely of three major motifs: nudes, single figures in costume posed three-quarter and full-length, and a late series of allegories focused on his studio. The model served a series of established poetic types: modern, Italian, or Greek women reading, seated or walking; women at wells; girls weaving crowns of flowers; women playing mandolins or tambourines, seated or standing, in an interior or against a landscape. 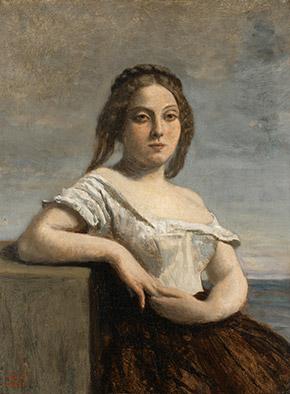 The costumed, single-figure works make up the largest component of Corot's figural paintings. They range from vaguely neoclassical images of models in muted tones, antique garb, and simplified compositions, such as The Blonde Gascon (c. 1850), to more romantic evocations of sitters in richly colored exotic dress, as depicted in Young Woman in a Pink Skirt (c. 1845–1850). Incorporating Corot's sophisticated color sensibility in the costume details, each work conveys a distinct feminine subjectivity.

In the mid-1850s the nude became a way for Corot to give a new direction to his career and to establish himself as more than a landscape painter. Corot's engagement with the traditional genre of the nude was complicated by the shifting social position of artists' models and the incursion of photography into artistic practice in France's Second Empire.

Corot's studio, recognized by his contemporaries as essential to understanding his method and the meaning of his art, embodied his artistic aspirations and achievements. Beginning around 1865 Corot transcribed and reinvented his studio in a group of paintings that reference the studio's broader artistic and cultural significance. More than just a working space, Corot's studio was integral to his identity and was a recurring theme in his art, especially in the final decade of his life.

Three highlights in this exhibition are from the Gallery's collection: Agostina (1866), Corot's largest figure painting; The Repose (1860, reworked c. 1865/1870), the only female nude he exhibited publicly; and Corot's Studio: Woman Seated before an Easel, a Mandolin in Her Hand (c. 1868), which is the most resolved from his series of studio paintings.

Corot's female figures hover between the sitter's likeness, art historical precedents, and formal innovations, resulting in mysterious images that go beyond the generic categories of portraiture, allegory, and erotica.

The exhibition is curated by Mary Morton, curator and head of the department of French paintings at the National Gallery of Art, Washington.

The exhibition is accompanied by a 180-page, fully illustrated catalog with essays by Morton; Sébastien Allard, head of the department of paintings at the Louvre, Paris; Heather McPherson, professor of art and art history at the University of Alabama, Birmingham; and David Ogawa, associate professor of art history at Union College, Schenectady, NY.

Published in association with Yale University Press, New Haven and London, this catalog reproduces some 50 paintings by Corot—from the single-figure bust and full-length images of the 1840s through the 1860s nudes and his allegorical series devoted to the model in the studio. Essays by leading experts address Corot's debt to the old masters and the impact of his pictures on both 19th- and 20th-century painting, the relationship of his figural work to his more famous landscape practice, his response to the shifting social position of artists' models, and the incursion of photography into artistic practice in the Second Empire and early Third Republic.

The exhibition is made possible through the support of The Edwin L. Cox Exhibition Fund and Leonard and Elaine Silverstein.

It is supported by an indemnity from the Federal Council on the Arts and the Humanities.