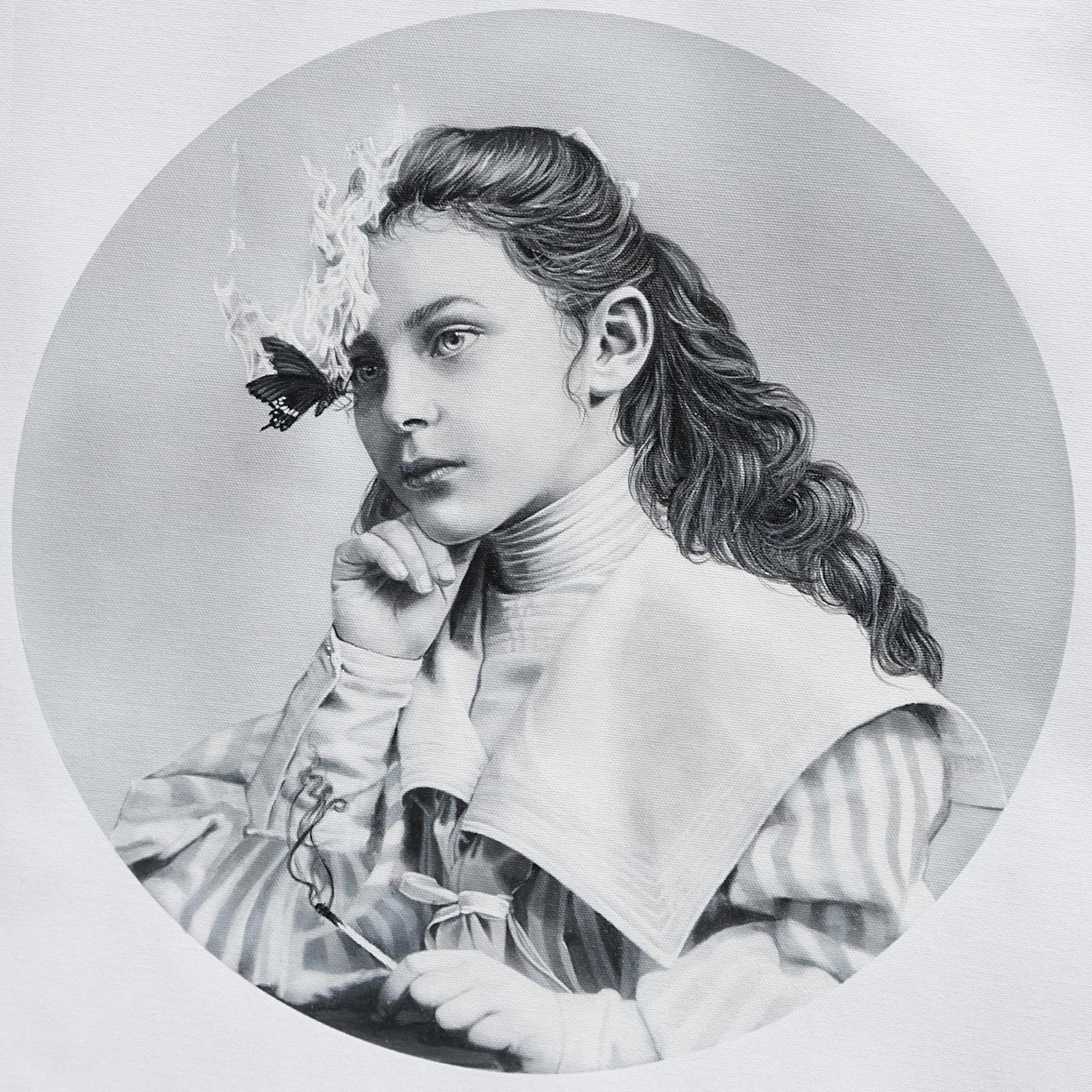 CHG’s February show promises a complete view of the latest in New Contemporary art: Andy Adamson's ceramics bring his unique sense of humor to pop culture's favorite characters, Helice Wen's beautiful figurative paintings capture moments of fragility and intimacy rarely seen, Kozyndan's delightful paintings on Japanese scrolls offer a fresh new take on ‘nihonga,' Rodolfo Loaiza's works take the taboos of reality and inject them into the idealized world of Disney, the topsy turvy world portrayed in Travis Lampe's paintings is a trip out of pandemia, Yang Cao takes us high above with new additions to his dreamy Clouds portraits, and Zoé Byland revisits the past in her haunting monochromatic portrayals that merge vintage with contemporary.

In his new series Bad Jokes for Bad People, Adamson creates satirical re-imaginings of pop-culture characters, sculpted in splendid ceramic material. He describes his work as "combining the highly-refined aesthetics and technical mastery of the medium with the absurd, my sculptures depict vignettes that highlight the role of humor as a tool for communicating about art." Regarding Bad Jokes for Bad People, the artist shares: “If you explain jokes they are less funny, especially when they were bad jokes to begin with.

This series of tasteful ceramic sculptures are playful depictions that the whole family are sure to enjoy! Since last year was so great and everyone had such a good time and nothing bad happened, I decided the best thing to do is keep this carefree party train a chuggin’ down the proverbial tracks of happiness and shove some more positivity and good vibes down everyone’s eye-holes with a roundup of satirical salves guaranteed to make you smirk.”

In Wen’s new series Daydream, the artist uses figures and floral patterns to narrate the intimate, vulnerable, and sensibilities in everyday life. Regarding Daydream, the artist shares: “I had initially planned the series around how to balance between reality, feeling, and expectation. Then the pandemic hit, and the surreal feeling is more than I could have ever imagined. I often sink into deep emotion when thinking about how to create during this period. I feel that my imagination is more real than real life.

I try to use different textures, shapes, patterns, and a variety of flowers to represent this feeling. In Daydream, I’m exploring real-life subjects by using fundamental graphic shapes and line work. The saturation of colors makes these elements feel as if they are exploding with emotion. Daydreaming is comforting to me; hope, passion, and the desire of life can guide me while in the real world – it's not always the best, but I’ve learned to enjoy it.” 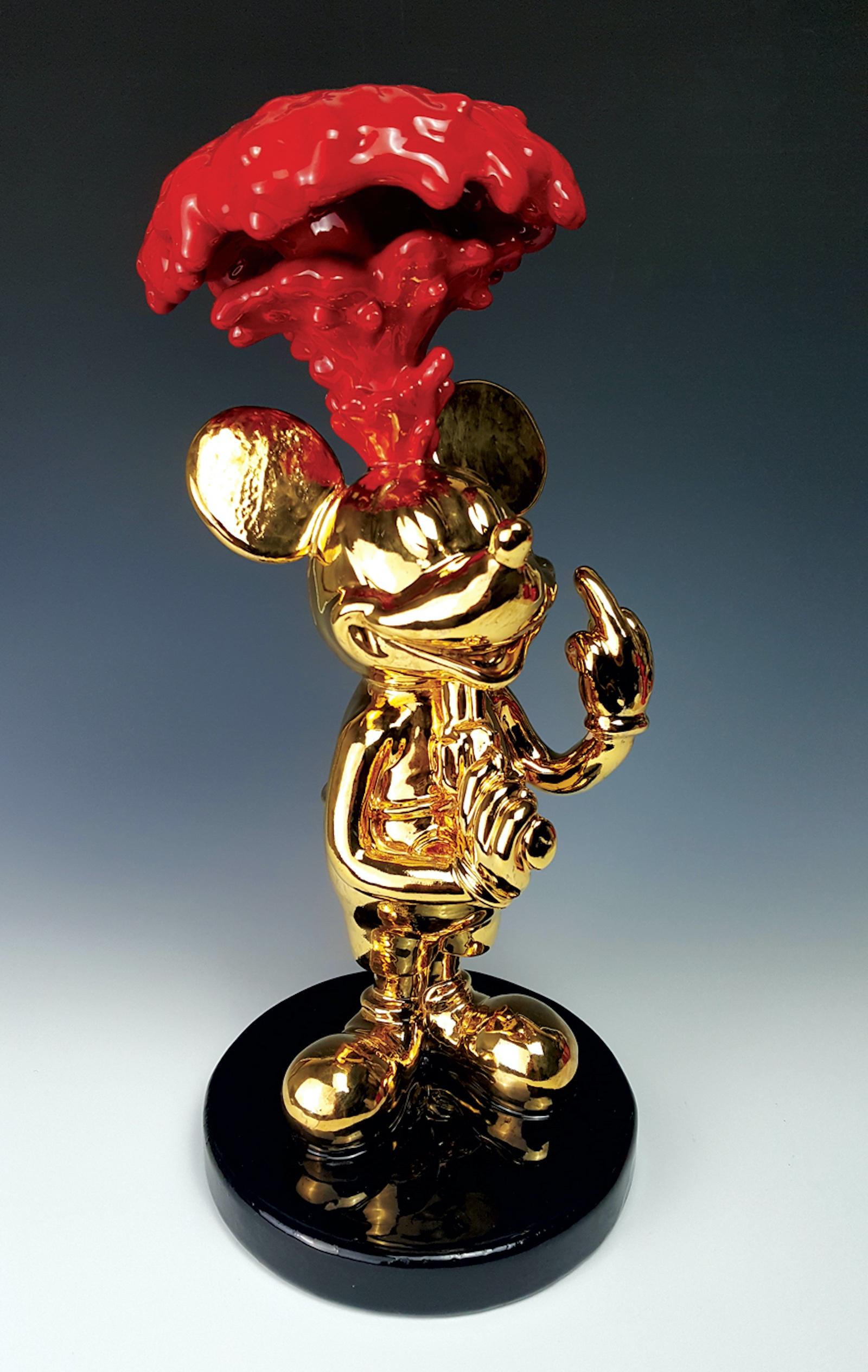 The husband-and-wife multidisciplinary artist duo, kozyndan, work collaboratively to create obsessively detailed works of art. Regarding their new series, The Weight of Snow, the duo share: “This small body of work is our first tentative steps back into working on art together after the massive rearrangement of our reality that happened after moving from Los Angeles to the Japanese countryside just days before the first Pandemic lockdown began in 2020. We started small (as our world has become small) with simple observations of the changing of the seasons and the animals we see in our yard and around our town.

The work also continues Kozy's interest in reconnecting with her culture, so she has created these paintings (based on Dan's drawings) using traditional Japanese paper and traditional Japanese pigment paint (nihonga), and we have chosen to present them in a traditional Japanese presentation, the hanging wall scroll (each one custom-crafted here in Yamanashi). The paintings are all ‘quiet.’ We wanted to do work that took us away from the noisy chaos we saw in the news every day and reminded us again of the things that have always grounded us in our work and our life. Creating each painting was a form of meditation we used to melt stress, and hopefully, studying the paintings can also be meditative for a viewer.”

A visual artist born in Mazatlan, Sinaloa, Mexico, Loaiza creates pieces that explore the manipulation of popular images and pop icons. Regarding Fame & Horror, the artist shares: “The fine line between celebrities' glamorous world and the disturbing world of horror sometimes can be too thin. Every day, the public's scrutiny, the press, and fans demand more details about celebrities and public figures' lives. It is becoming more usual and less surprising. Social media and the viral-ization of their ‘tragedies’ generate a curious and frivolous addiction to contemporary pop culture.

Not being a celebrity does not guarantee not experiencing a moment of exposure in the age of social media. This is a horrific scenario that, in the 21st century, no one is exempt from experiencing. This series of five oil paintings and five acrylic paintings travel both worlds, reflect them, confronts them, and feeds them back. It is presented in an idyllic and disturbing fairy tale setting of fame and horror.”

Regarding Waveringly Dumb, Travis Lampe shares: “Last year was a real stink fest, guys. There. I said it. But can one let a bad year stop the production of dumb stuff? Can one simply cower in one's basement and cry? Yes. A lot, frankly. Then, after all the crying, one can get up, grab some brushes and start kind of flailing around with them, which will hopefully result in a couple of pieces. Because here's the thing: they do not paint themselves. Someone must do it. The paintings give a lil' peek at the inner workings of my mind during these challenging times.” 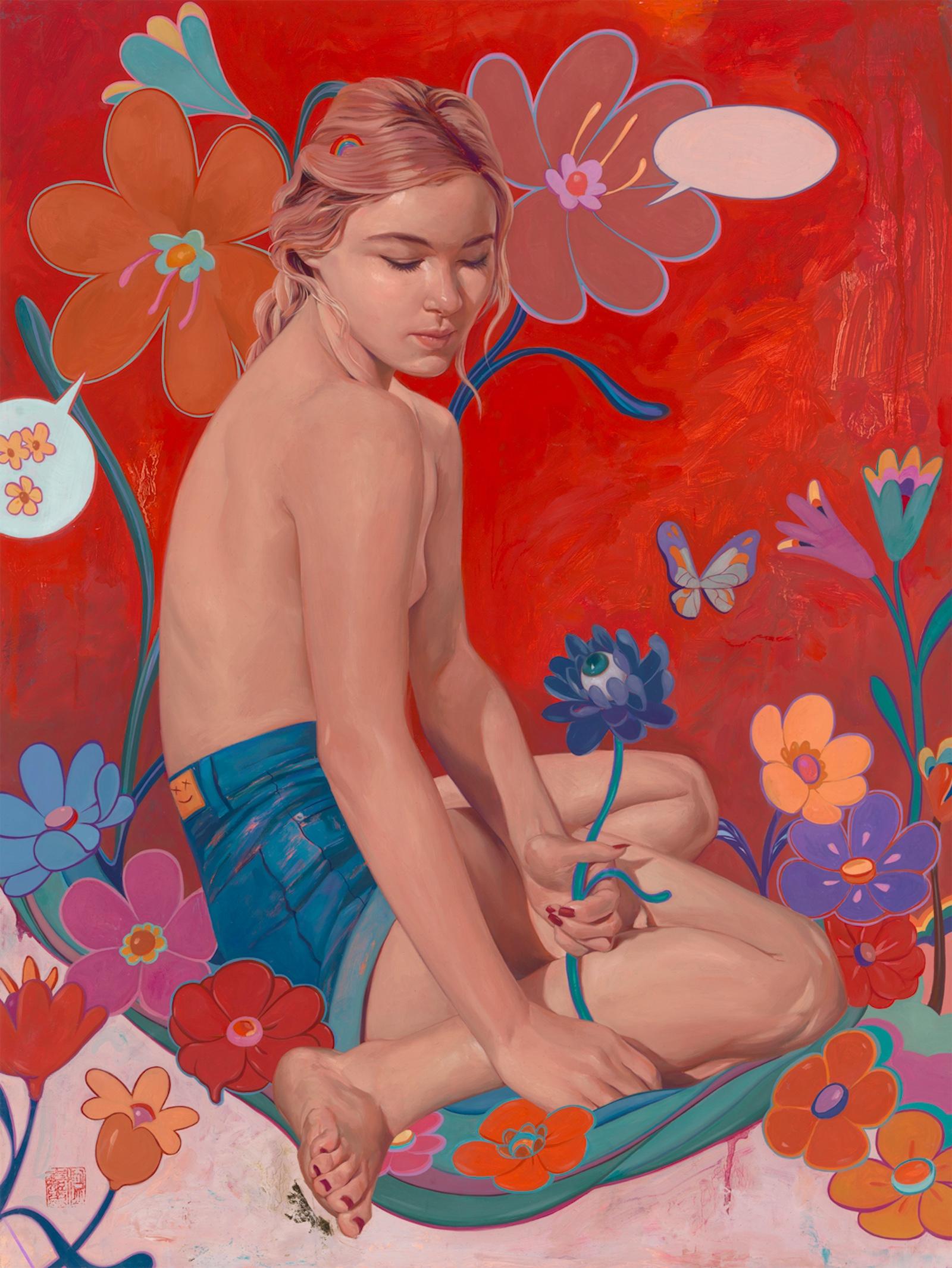 Helice Wen, On the Nature of Daydreaming No.3. Acrylic, oil, and metallic foil on wood panel.

Cao, the Toronto-based figurative painter, uses subtle yet elegant render, combining various subjects in his paintings to create narratives with a surreal mood, a window to the inner mind, a state between real and unreal. Regarding Liminal, the artist shares: “From the beginning of my creative career, I have expressed an intense and insightful fascination with the expansive array of human emotions and sensations, which I perceive as connecting all persons notwithstanding their differences.

The artistic exploration of these residues of emotion permits me to draw the audience into my creative expression. In my Liminal series, I combine clouds with figures to express the unpredictability of human nature. It is shapeless and changes all the time; it follows the wind and never stays in one form and place. Somehow, I find, this theme resembles all of us.”

Byland, the Zurich-based painter, incorporates vintage photography, film noir, graphic novels, superheroes, and tattoos into works that combine the traditional and the contemporary, the classical and the subcultural. Regarding Unspoken, the artist shares: “My characters never fully reveal their identity; they retain a degree of secrecy, protect themselves, are simultaneously visible and vulnerable. The viewer's imagination has room to think up their narrative ideas and meanings. Just like a good story, for me, a good painting needs an atmosphere that draws you in and defines the genre in which the narrative is taking place.

Last year was extraordinary for everyone, globally and individually; we all had to deal with new challenges and experiences, which we often lacked the words to talk about. For this situation, a new vocabulary must be found, one that tries to establish an emotional connection when physical closeness is not possible, one that creates a new understanding for one another. With pictures, it is possible in a direct way to speak non-verbally to other people's hearts and share feelings. The fewer words we have, the more we start feeling again.”

Corey Helford Gallery (CHG) was first established in 2006 by Jan Corey Helford and her husband, television producer, and creator, Bruce Helford and has since evolved into one of the premier galleries of New Contemporary art. Its goals as an institution are the support and growth of young and emerging to well-known and internationally established artists. CHG represents a diverse collection of international artists, primarily influenced by today's pop culture and collectively encompassing style genres such as New Figurative Art, Pop Surrealism, Neo Pop, Graffiti, and Street Art. CHG is located in Downtown Los Angeles in a robust 12,000 square foot building presenting new exhibitions approximately every six weeks.