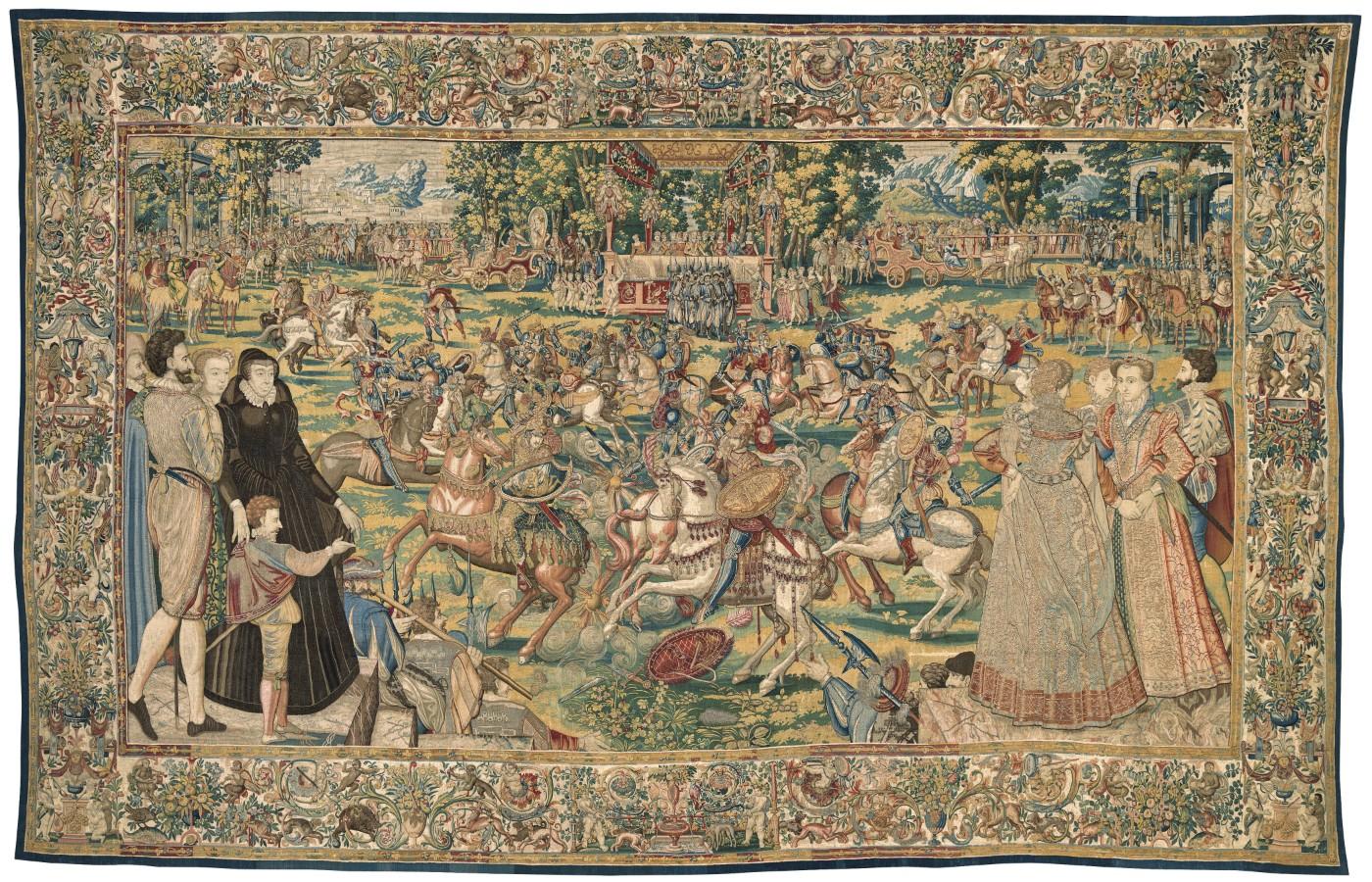 Cleveland, OH – An exhibition of international significance, Renaissance Splendor: Catherine de’ Medici’s Valois Tapestries unveils six recently restored Valois Tapestries, on view for the first time in North America. This unique set of eight hangings was almost certainly commissioned in the 1570s by Catherine de’ Medici, the indomitable queen mother of France, to celebrate the future of the Valois dynasty as continuing rulers of France. Juxtaposing the hangings with paintings, drawings and exquisite art objects of the period, the exhibition explores the tapestries’ role as an artistic and political statement involving two of the most powerful European dynasties of the Renaissance—the Valois and the Medici—and their respective power bases in Paris and Florence. The CMA has partnered with the Gallerie degli Uffizi in Florence and the Italian Ministry of Cultural Heritage and Cultural Activities to organize this exhibition, which reveals for the first time the completed conservation of these unique hangings. Renaissance Splendor: Catherine de’ Medici’s Valois Tapestries is on view in the Kelvin and Eleanor Smith Foundation Exhibition Hall from November 18, 2018, to January 21, 2019. 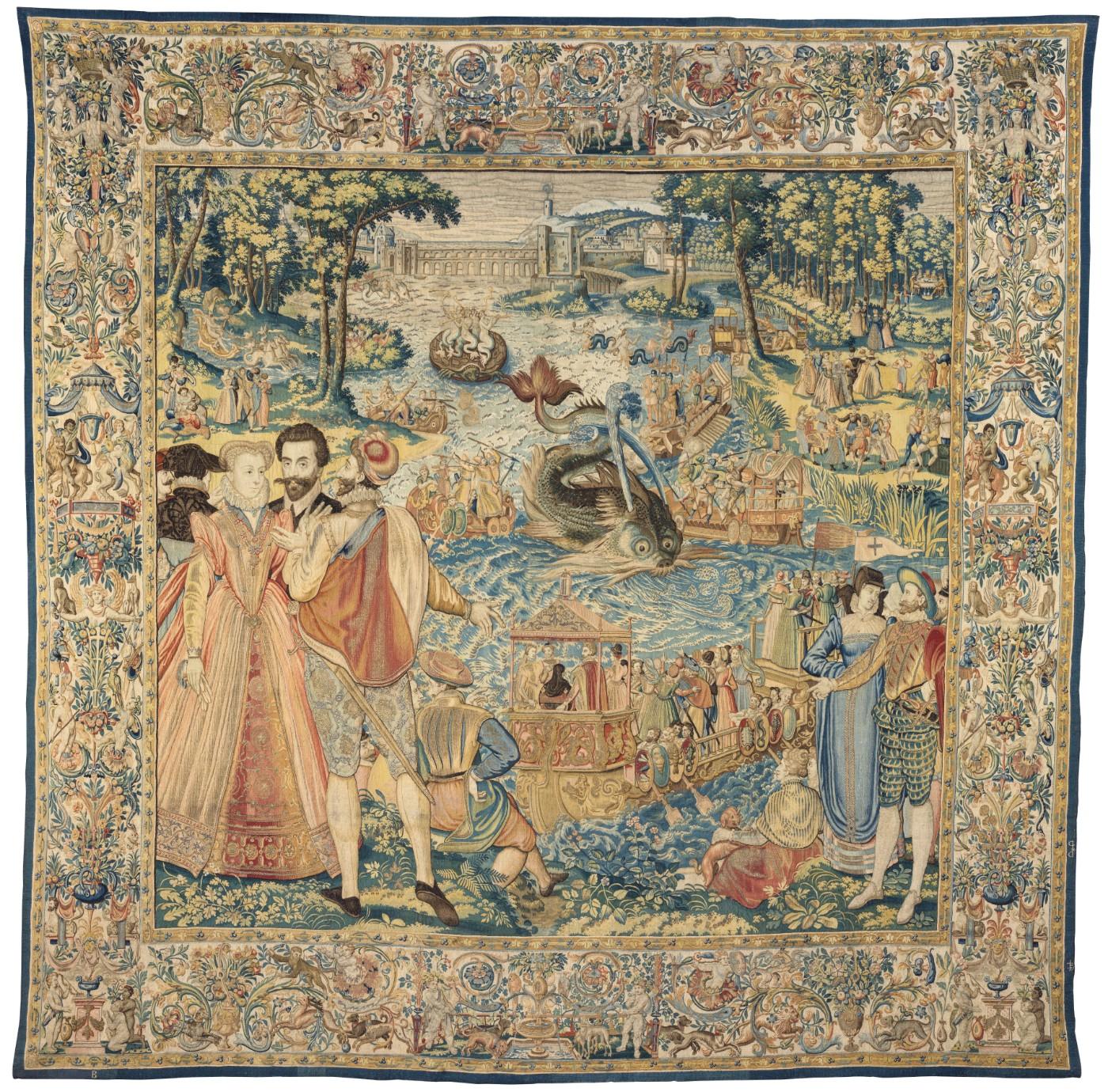 “Among the most admired and ambitious artistic endeavors of their time, the Valois Tapestries embody the pageantry, splendor and political intrigue of Renaissance Europe,” says William Griswold, director of the Cleveland Museum of Art. “We are delighted to have collaborated with the Uffizi to bring six of these remarkable tapestries to Cleveland.”

“This exhibition presents Cleveland audiences with a unique opportunity to view this extraordinary set of tapestries, now gloriously transformed through a painstaking, multiyear restoration process, which has been made possible by the generosity of the Friends of the Uffizi and their major benefactor, Mrs. Veronica Atkins,” says Eike Schmidt, director of the Gallerie degli Uffizi.

Woven in Brussels with wool, silk and precious metal-wrapped threads, the 14-foot-high hangings are rich in both their materials and intricate subject matter. Life-size, full-length portraits of the French king, princes and princesses, and prominent courtiers are situated prominently in the foreground of each tapestry, locking eyes with the viewer and presenting detailed scenes of court pageants and extended celebrations called “magnificences.” These lavish events were hosted by Catherine to mark family reunions, diplomatic visits or political events. Extending over several days, each “magnificence” typically featured music, dance, theatrical performances, fireworks and martial enactments in elaborate, specially constructed settings. The Valois Tapestries are the most vivid and detailed surviving visual record of these signature events of the Valois court. 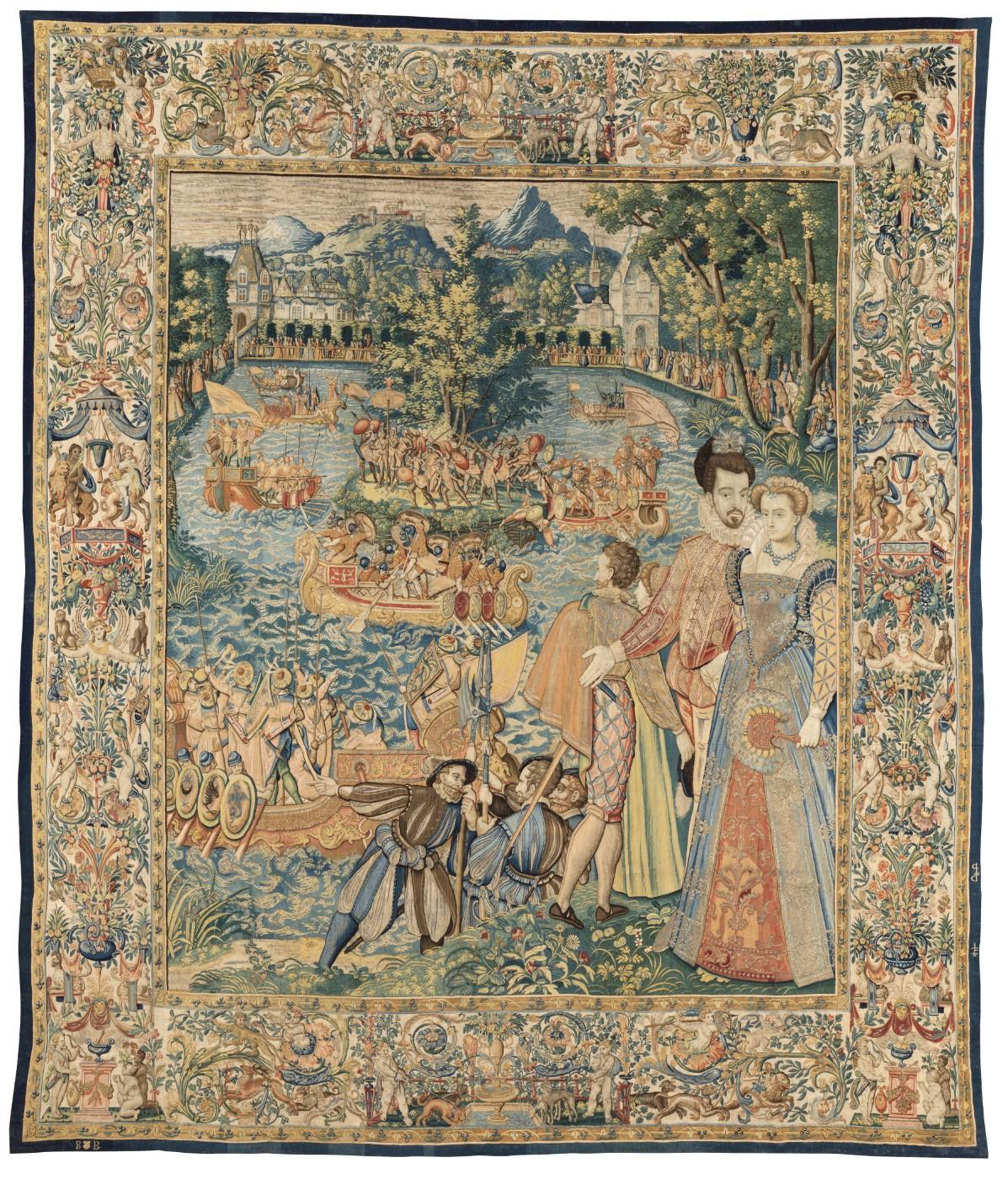 “It is an enormous privilege to be able to bring these tapestries to Cleveland and to share them with our visitors,” says Marjorie E. Wieseman, Paul J. and Edith Ingalls Vignos Jr. Curator of European Paintings and Sculpture, 1500–1800, and chair of European art from classical antiquity to 1800. “They reveal so much about life at the French court in the 1570s—and even more about the carefully constructed image of that world that Catherine de’ Medici wanted foreign nations to see. The tapestries were never simply decorative: the rich colors and the profusion of glorious detail are meant to impress us with the wealth, power and cultivated taste of the Valois.”

Born in Florence, Catherine traveled to Paris at age 14 to become the wife of Henri II, son of François I, king of France. Henri became king upon the death of his father in 1547. After Henri’s death in 1559, Catherine devoted herself to ensuring the continued dominance of Henri’s family—the Valois—on behalf of their children and subsequent generations. Political machinations or strategic marital alliances could achieve this goal, but an equally effective way of demonstrating the might of the Valois dynasty was to impress both French subjects and foreign nations with the splendor and extravagance of life at court. Catherine built magnificent palaces and amassed an impressive art collection; several works that she personally owned are featured in the exhibition, including jewels, decorative vessels carved from semiprecious stone and portraits of family members.

Despite those efforts, the Valois monarchy ended in 1589 with the assassination of Catherine’s son Henri III, king of France, mere months after her own death. Also that year, the tapestries left Paris for Florence, accompanying Catherine’s granddaughter Christina of Lorraine, when she married Ferdinand I de’ Medici, Grand Duke of Tuscany. Today the tapestries are the property of the Gallerie degli Uffizi in Florence.

Despite centuries of care, the fabric of the Valois Tapestries was gradually weakened by dust, stains, wear and tear, insect damage and even some small areas of much later overpainting applied in an attempt to bring out details in the designs. An ambitious 20-year conservation campaign, supported by the Friends of the Uffizi, began in 1998 to strengthen and support weakened threads and to remove centuries of accumulated grime. Six of the eight tapestries have now been conserved.

The delicate process and remarkable results of this conservation work, as well as the fascinating insights yielded by close physical examination of the tapestries, are presented in a short film in the exhibition.