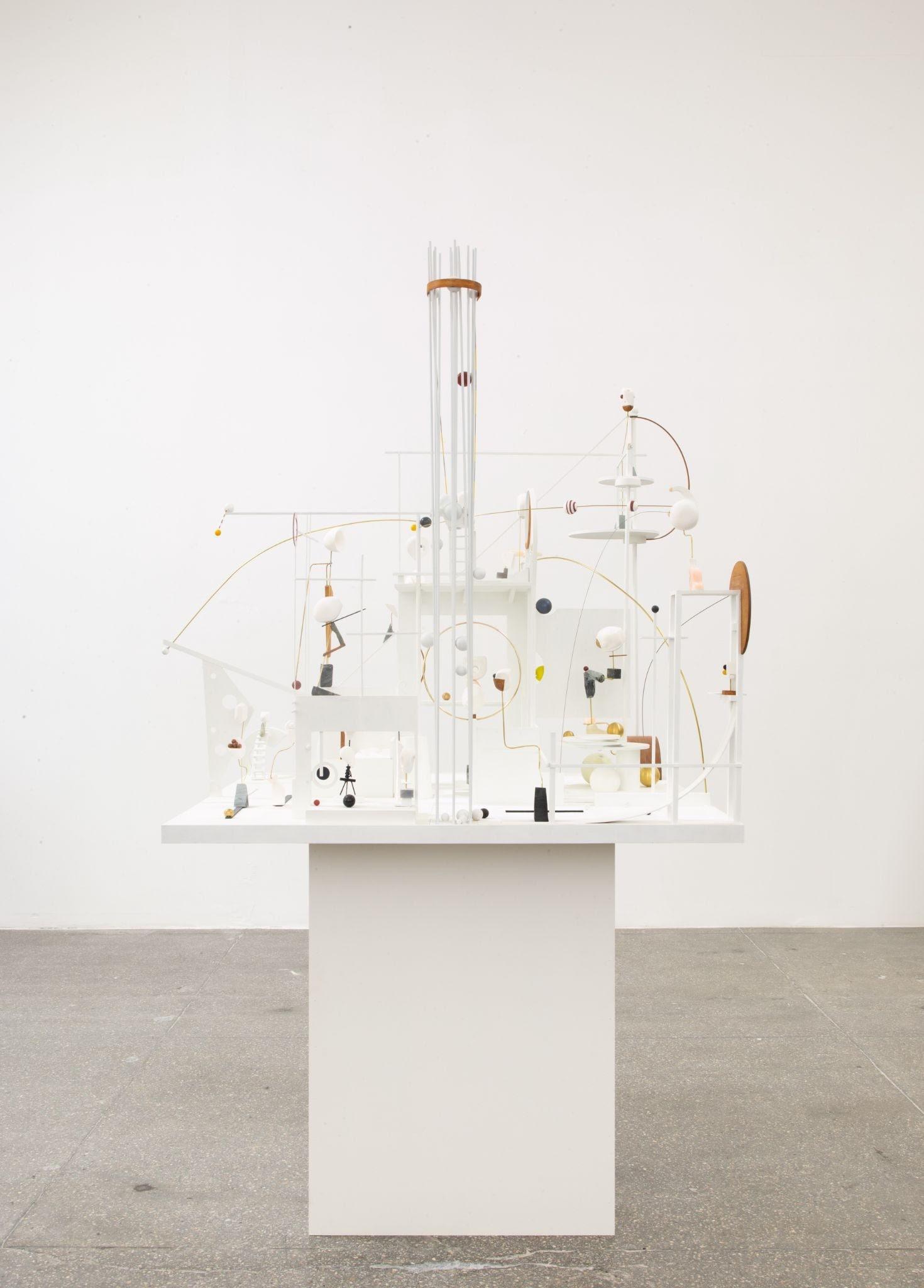 Helwaser Gallery is pleased to present the second solo exhibition of new works by artist Christina Kruse (b. 1976, Germany). Christina Kruse: Plasterheads will be on view through August 28, 2021 at the gallery’s Madison Avenue space, and will introduce the artist’s latest sculpture works. Over the last decade, the artist has developed a distinct visual language within her practice. Often resembling abstracted human figures, her sculptures are defined by a combination of organic, rounded shapes offset by strong rectilinear forms.

For this exhibition, Kruse has developed a large-scale installation which will be displayed in the first room of the gallery. Displayed on a collapsible table, the installation is likened to a miniature world, where multiple figure-like maquettes are scattered across various miniature architectural elements. Rendered in different positions and poses, the maquettes resemble human figures caught in various acts: climbing in and out of the structure, looking up or down, in search for something. Yet, the figurines don’t interact with each other. Described as a metaphorical playground of the inner psyches, Lunapark (2021) attests to the artist’s interest in the deeper psychological states that motivate and shape the world that their human counterparts inhabit. For Kruse, each of the elements within the entire installation, including its materials, serve as a deeper metaphor that expresses the structure of the world that we inhabit. By choosing to use plaster and soapstone as primary materials to construct the maquettes, both of which are easily shaped, Kruse highlights the very malleability of human nature itself. Set against the infinite expanse of the table construction, these maquettes seemingly capture the endless permutations of behavior that result when they are connected by space and time.

Also on view is a second installation consisting of a group of four sculptures. Presented in the second room of the gallery, Will o’ the wisp (2021) evokes the imagery of a still landscape. In contrast to the thin, elongated forms found in Lunapark, these sculptures engender a feeling of solidity through their volume and weight. Created through the use of materials such as wood, marble, plaster, and soapstone, these sculptures poetically underscore a sense of settlement, steadiness, and fixity. Accompanying these sculptures are also a second freestanding sculpture The Directionalist (2021), and a hung wall sculpture Intermission (2021). These works expand on the formal and metaphorical binaries that can be found between the dynamics of the two antimonious installations —play/rest, chaos/order, and instability/balance. Building on her fascination with interior and exterior states of being, Kruse’s latest works trace a connection between the formal practice of sculpture, and the psychological conditions of continuous becoming.

About the artist: Christina Kruse is a New York-based multi-disciplinary artist who works across the fields of photography, painting, and sculpture. Her ongoing body of sculptural works combine bronze, marble and wood in standing arrangements that reference geometry. Although grounded in structure, balance and stability, Kruse’s sculptures nevertheless evoke similarities to the human head and face, drawing connections between rationality and the oftentimes more capricious side of human life. Previous significant works include Dystonia (2013), a three-part performance artwork where Kruse confronts the instability of the human lived experience. Getting into a purpose-built aluminum sculpture calibrated to automatically right itself after being pushed, Kruse allows herself to be taken along by the movements of the sculpture as it struggles to right itself in the face of multiple pushes and forces from all sides. Her earlier photographic and collage works draw on her personal biography, often deploying self-portraits layered with tape, watercolor, ink, and other media in her formal compositions. Kruse is a recipient of the GLAAD award for Best Emerging Artist in Photography (2005). Her works have been featured in solo and group exhibitions in New York, France, Austria, and Germany, amongst others.

About the gallery: Based along Madison Avenue, Helwaser Gallery presents mid-career and established artists, including Anton Ginzburg, Boedi Widjaja, Christina Kruse, and Lin Yan. It also specializes in the work of post-war masters, such as Tom Wesselmann, Alexander Calder, Adolph Gottlieb, and Helen Frankenthaler, among others. Founded in Paris in 1986, the gallery has initiated significant exhibitions, including a retrospective on Jean Dubuffet (1996), and presentations on French cubist masters, notably Georges Braque, Jean Metzinger, and Pablo Picasso. In 2008, Helwaser Gallery marked its inaugural relocation to New York with the group exhibition Red, which presented works by Hans Hofmann, Andy Warhol, and Jean-Michel Basquiat. In 2019, Helwaser Gallery reopened its present space with a public exhibition program, presenting internationally recognized artists. The gallery program emphasizes a dialogue between contemporary art, and modern art historical movements and contexts.