Christie’s to Auction the Collection of Eileen and I.M. Pei 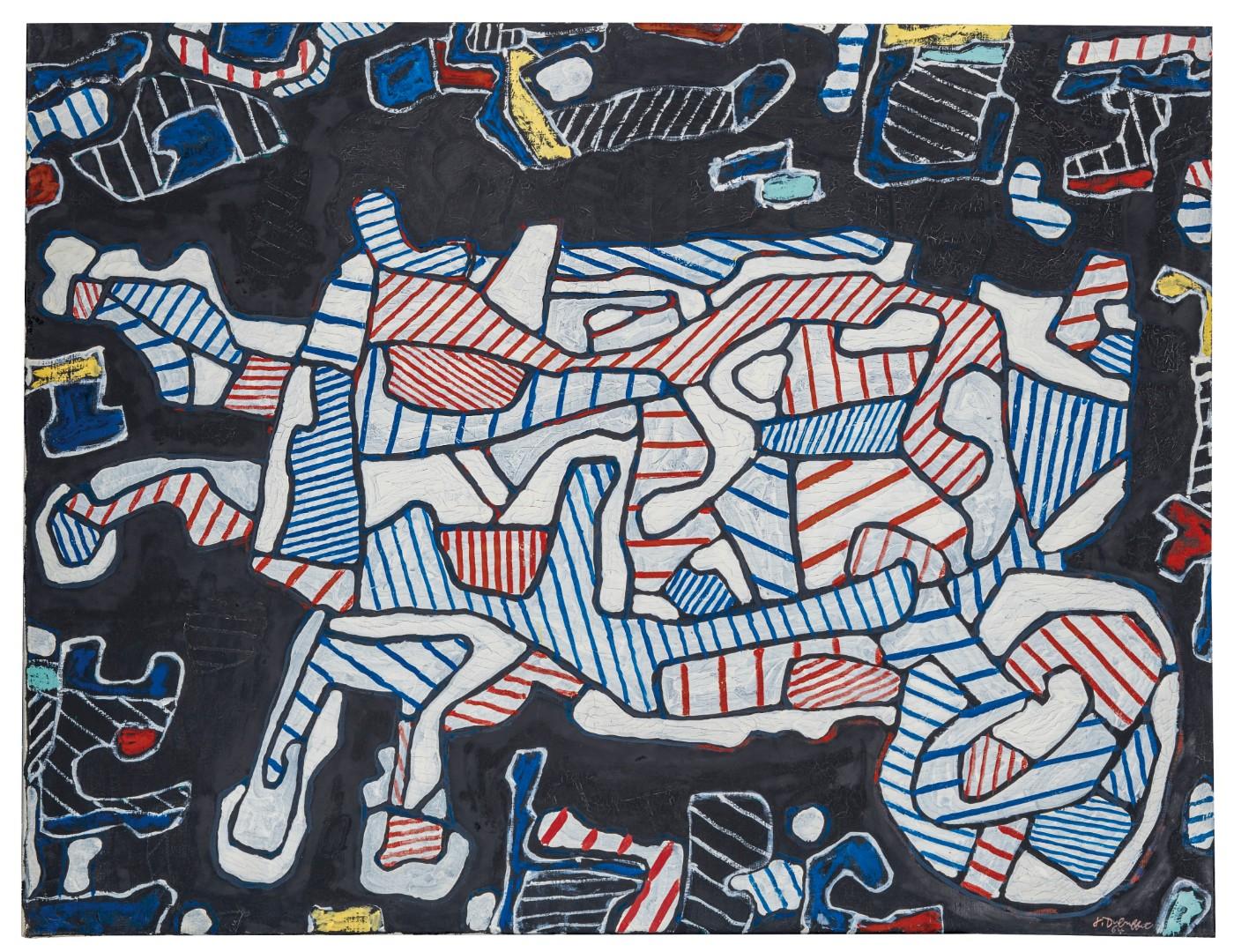 New York – Christie’s is honored to have been entrusted with The Collection of Eileen and I.M. Pei, an exceptional selection of paintings, drawings, works on paper and sculpture assembled by the celebrated international architect and his wife over the course of their 72-year marriage. The collection, a sophisticated blend of artworks by Eastern and Western artists, will be offered through Christie’s major sales sites in New York, Hong Kong, and Paris this fall in the categories of Impressionist & Modern Art, Post-War & Contemporary Art, Asian 20th Century Art, and Chinese Paintings. Highlights of the collection include seminal works by Barnett Newman, Jean Dubuffet, and Zao Wou-Ki, who were personal friends of the architect and his wife for many years and formed a part of their close community of artists, architects, and intellectuals. Additional works by Franz Kline,Zhang Daqian, Qi Baishi, Willem de Kooning, Henry Moore, Jacques Lipchitz, Xu Shiqi and Isamu Noguchi highlight the diversity of the couple’s aesthetic interests and influences. The full collection is expected to exceed $25 million. 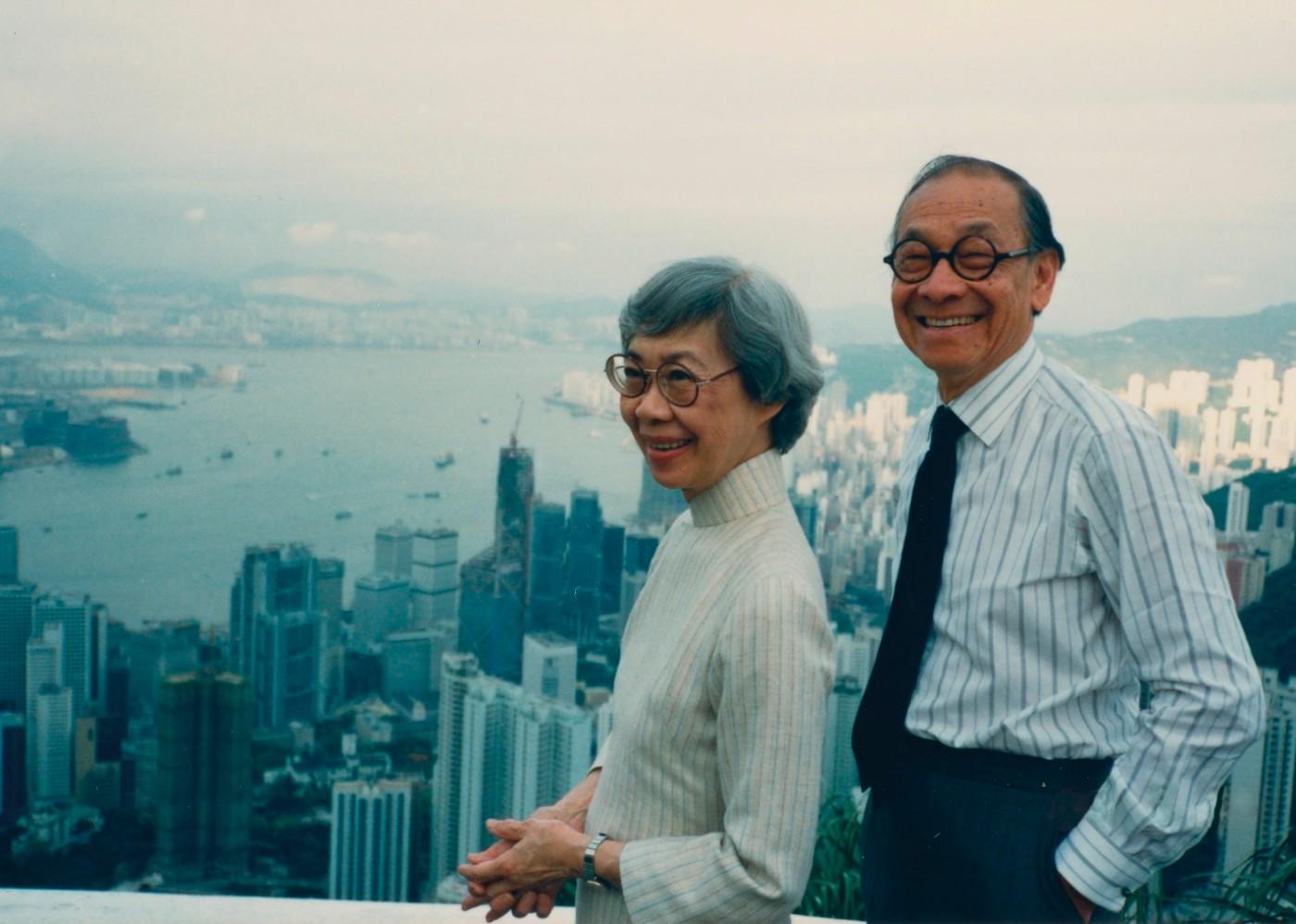 Liane Pei, daughter of Eileen and I.M. Pei, said: “My parents’ collection is a personal reflection of how they lived. They shared a deep curiosity about the world and I have wonderful memories of traveling with them. No matter the country, they always seemed to have friends, many of whom were artists, architects, gallerists and museum directors, ready to welcome them. There was always a deep feeling of mutual respect, warmth and friendship. Whenever we were in Paris, we would visit Zao Wou-ki, whom I always referred to as ‘Uncle Wou-ki,’ to see his latest paintings. Years later, I recall a splendid trip to Venice with Annalee Newman, whom I adored as a grandmother. She and Barnett Newman, along with friends such as Tony Caro, Isamu Noguchi, and Pierre and Tana Matisse were often invited to our home. A tremendously accomplished chef and consummate hostess, my mother was always ready with a delicious home-cooked meal, which my father was equally ready to match with the perfect bottle of wine. My parents cherished these friendships. Even when these friends were far away, however, it never felt like that. We lived with their art every day and so they were always present. In that respect, I believe my parents could not have been happier, as they found inspiration in, and were always surrounded by, their treasured friends.”

Marc Porter, Chairman, Americas commented: “It is an honor for us at Christie’s to be entrusted with a collection that speaks to the wonderful relationship Eileen and I.M. Pei shared as equal partners in marriage, scholarship, design and art collecting. The Pei name is one that resonates around the world, integrated into the landscape of the dozens of cities that feature a Pei-designed art museum, concert hall, university, hospital, office tower or civic building. We are looking forward to sharing this collection with our clients and the public on a global scale this fall, throughout Europe, Asia and the Americas. In a fitting tribute to I.M. Pei’s most iconic architectural creation, Christie’s Paris will host the debut of highlights from this exceptional collection, continuing our dedication to providing the global collecting community with unique access to celebrated family collections.”

Johanna Flaum, Senior Vice President, Head of Sales, Post-War and Contemporary Art, added: “The Barnett Newmans came from his wife Annalee Newman a few years after Newman passed away and many of the Jean Dubuffets are inscribed specifically to the Peis. Their collection was a significant part of the couple’s self-designed home, which speaks very much to the dialogue they had between top artists of the 20th century and I.M Pei’s aesthetic eye as their contemporary in the field of architecture.” 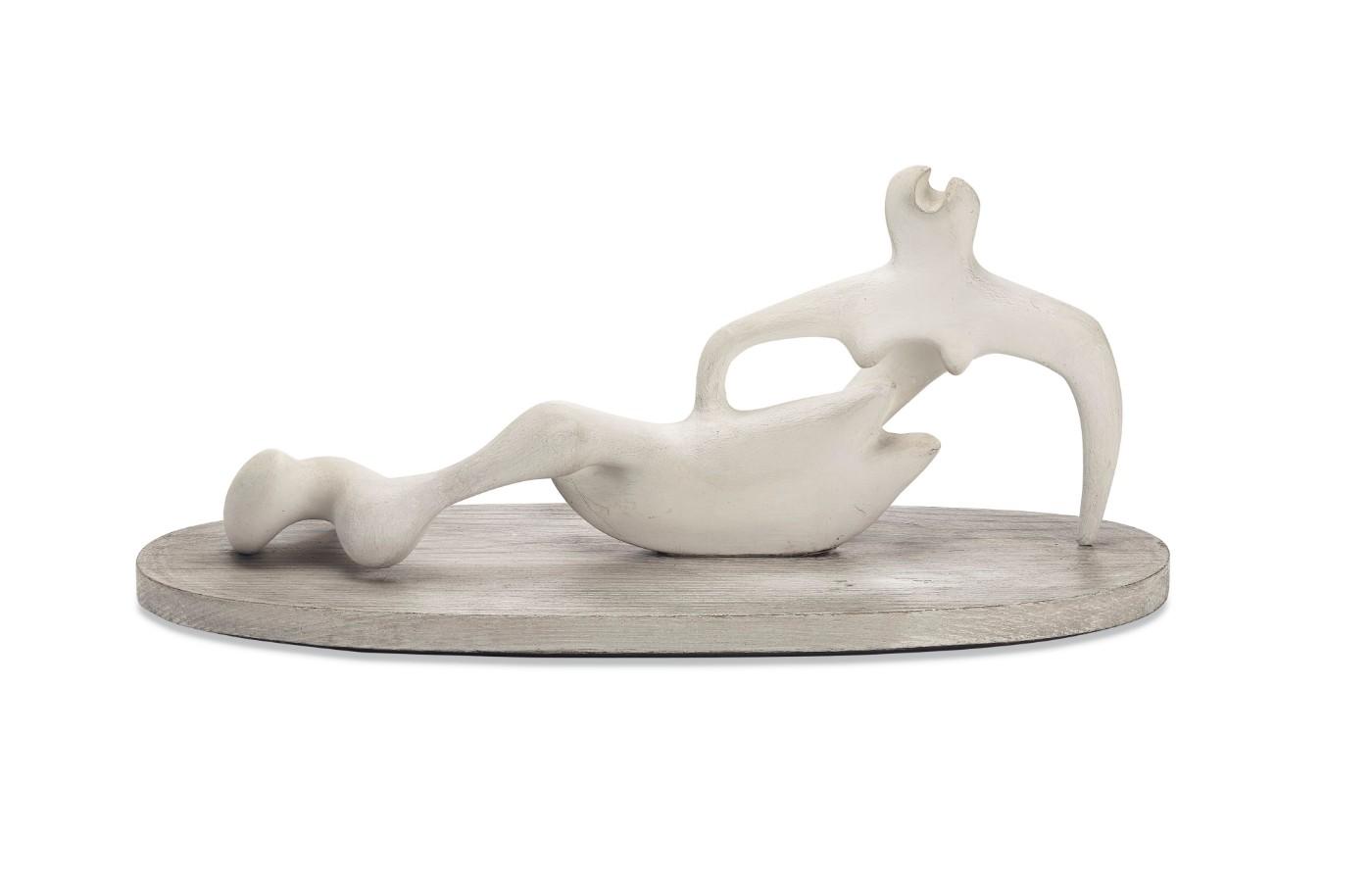 Born in Guangzhou, China in 1917, I.M. Pei was a member of an illustrious family whose prominence extended back to the Ming Dynasty. Eileen Loo, born in Tianjin, China in 1920, hailed from an equally respected family with a granduncle, Tang Shao-Yi, who served as the first Prime Minister of the Republic of China (1911-12). Her maternal grandfather was Yin Tang Chang, Ambassador from China to Washington in the early part of the 20th century. Lifelong scholars, the couple married in 1942 immediately after Eileen Loo graduated from Wellesley College, where she studied art, and as I.M. Pei was beginning his career as an architect, having recently graduated from MIT’s School of Architecture.

Pei went on to establish I.M. Pei & Associates in 1955 and would become known as one of the most influential and preeminent architects of the 20th and 21st centuries whose inspired designs grace major cities the world over. Among his most celebrated creations are his iconic glass pyramid at the Louvre in Paris, the Bank of China Tower in Hong Kong, the Museum of Islamic Art in Doha, the Rock & Roll Hall of Fame in Cleveland, and the East Building of the National Gallery of Art in Washington, D.C., among many others.

Highlights of the Personal Collection

“Great artists need great clients,” I.M. Pei once remarked. It was with this simple philosophy that the couple discovered new works, which was guided by Mrs. Pei’s particularly strong curatorial eye that brought them into the studios of Jean Dubuffet, Jacques Lipchitz, and others, where they directly acquired multiple works for their collection.

Jean Dubuffet’s La Brouette (The Wheelbarrow) (Estimate: EUR 350,000 – 550,000) is at the heart of the artist’s Hourloupe cycle, which started in 1962 and would occupy him for 12 years. During this long cycle of creation, Jean Dubuffet employed the use of everyday objects and utensils (first two- dimensional and later in three dimensional sculptures) — gas ovens, chairs, boats, stairs, coffeemakers, teapots or the wheelbarrow, which would become emblematic of the artist. The wheelbarrow is also reminiscent of Dubuffet’s interest in the agriculture, which was already present in his 1940s agronomic scenes and his “texturologies” and “matériologies” (materializations) of the 1950s. A close friend of the couple, I.M. Pei commissioned Dubuffet to create a unique work for display in the East Building at The National Gallery of Art in Washington, D.C., which the architect designed and unveiled in June 1978.

Barnett Newman’s Untitled 4, 1950 and Untitled 5, 1950belong to a limited group of paintings that Newman executed in 1950. Indeed, this can be seen in Untitled 5, 1950 (Estimate: in the region of US $5 million) as the underlying black ground extends beyond the front plane to envelop the sides and upper and lower turning edges. Untitled 4, 1950 (Estimate: in the region of US $8 million) is made up of three perpendicular bars of pigment, two darker reddish brown bars that surround a much warmer, reddish central core. This middle stripe appears to be painted on top of the darker layer, giving it a richer, more luxurious quality. These two works come from a series of six Newman created in that year, of which three are in museum collections including MoMA, Art Institute of Chicago, and Menil Collection, Houston. Alongside the grand gestural abstractions of peers such as Mark Rothko, Jackson Pollock, and Clyfford Still, Newman’s canvases might appear restrained, yet they are carefully constructed and considered manifestations of their creator’s psyche. Both paintings were acquired by Eileen and I.M. Pei in the mid-1970s directly from Newman’s widow Annalee, who remained a close friend of the Pei family after her husband’s passing in 1970. 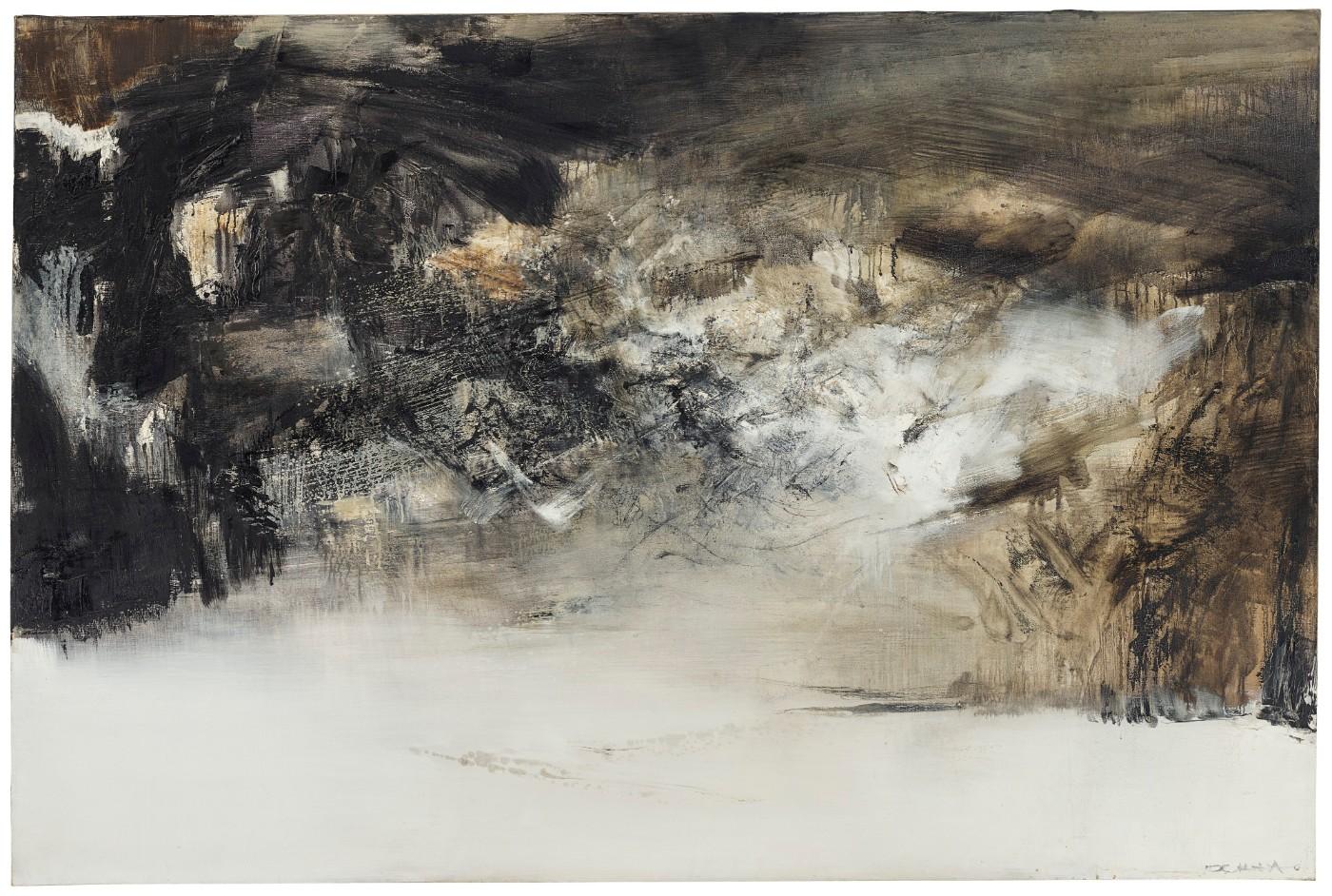 Zao Wou-Ki, also a close friend of the Peis, bridged the divide between Eastern and Western traditions, which can be seen in the two evocative works being offered. Born in Beijing, the artist and his wife, Lalan, relocated to Paris where he continued to be influenced by Western modernism and the work of Impressionists and Expressionists. It was after his move to Paris that his paintings began to shift towards abstraction. As Zao’s work grew increasingly abstract during the 1960s, he began to move away from the detail-heavy style that characterized his oracle-bone period towards a bolder, more energetic mode of painting. By 1971, Zao had returned to the brush-and-ink technique he learned in China, with work that reflected its sources in Chinese traditions but also his conceptual roots in Western abstraction. Major institutions that hold his paintings in their permanent collections include the Museum of Modern Art, the Guggenheim, and Tate Modern.