Cézanne: The Rock and Quarry Paintings 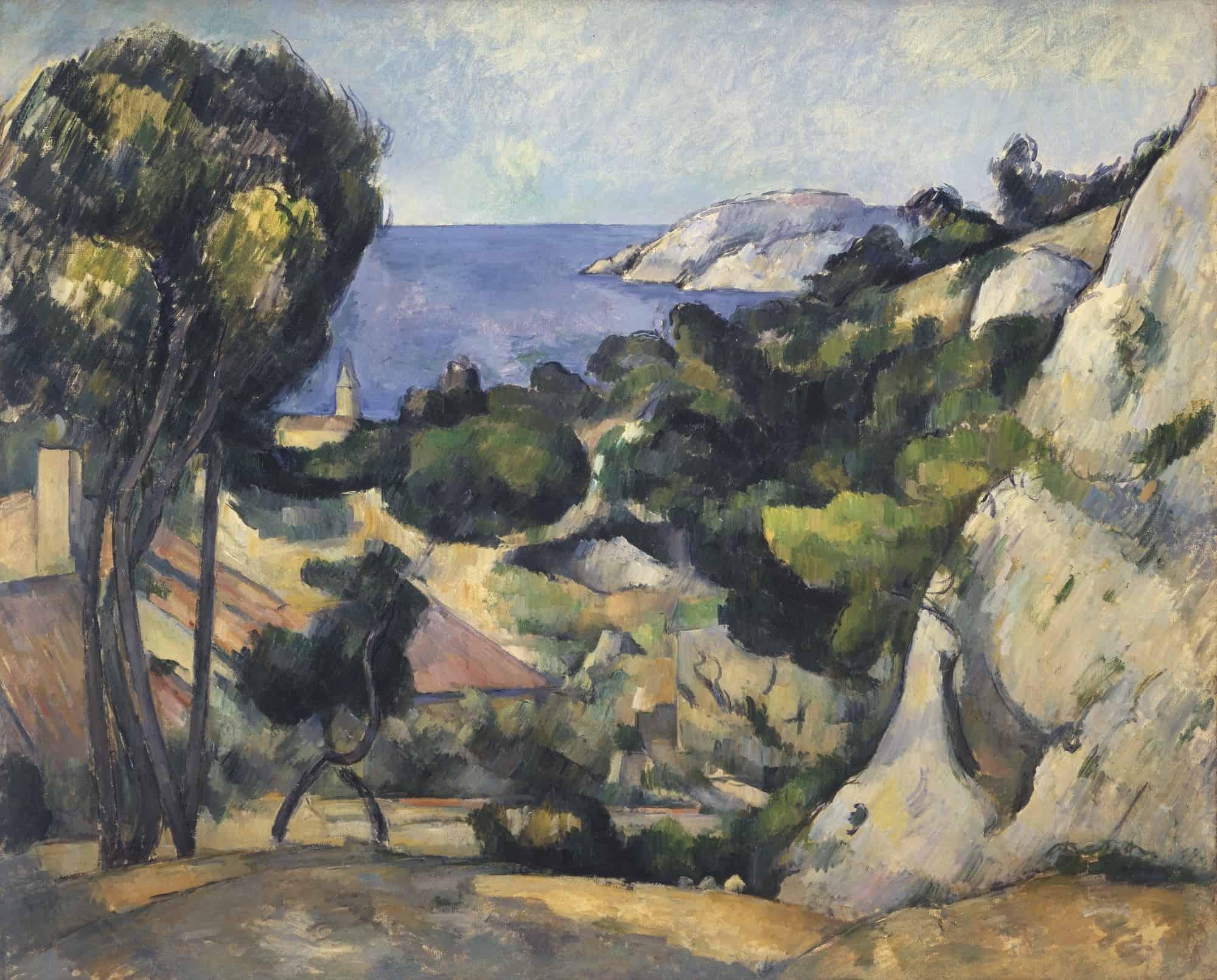 “In order to paint a landscape well, I first need to discover its geological foundations,” Paul Cézanne, 1897

Cézanne: The Rock and Quarry Paintings is the first exhibition to examine essential but underestimated aspects of the revolutionary French painter’s work: his profound interest in rocks and geological formations, and his use of such structures to shape the compositions of his canvases. Three of the principal areas of France in which Cézanne (1839-1906) painted landscapes are full of rocky terrain: the Forest of Fontainebleau, southeast of Paris; L’Estaque, a village in Provence on the Mediterranean coast immediately above Marseille; and the area around Aix-en-Provence, his birthplace. With significant loans from museum and private collections in the U.S. and abroad, the exhibition features approximately 15 of the two dozen canvases that the artist made at these sites, supplemented by selected watercolors. An accompanying fully illustrated catalogue considers the entire corpus of Cézanne’s work on these subjects. 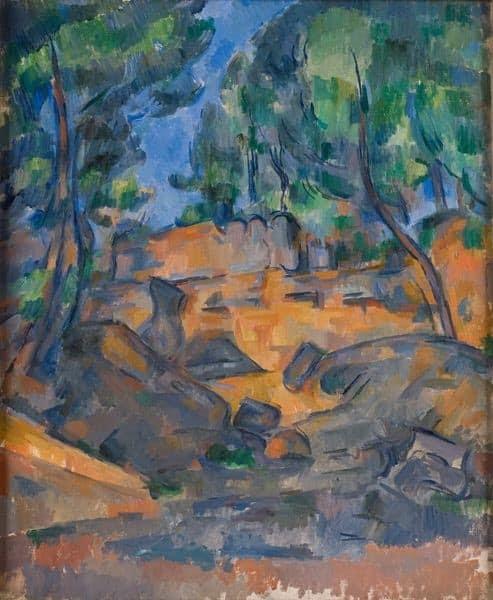 Organized by the Princeton University Art Museum in association with the Royal Academy of Arts, London, Cézanne: The Rock and Quarry Paintings premieres in Princeton from March 7-June 14, 2020, before being shown in London from July 12-Oct. 18, 2020. The exhibition is curated by John Elderfield, who served from 2015 to 2019 as the inaugural Allen R. Adler, Class of 1967, distinguished curator and lecturer at the Princeton University Art Museum, and is chief curator emeritus of painting and sculpture at the Museum of Modern Art.

“This historic project highlights an essential body of work by a monumental artist that has not previously been the focus of such concentrated scholarship,” said James Steward, Nancy A. Nasher–David J. Haemisegger, Class of 1976, director. “The exhibition and publication of these profound, provocative and deeply rigorous compositions afford remarkable insights into the career of a canonical artist and are a fitting finale to John Elderfield’s time here at Princeton.”

With its rocky terrain, quarries and ancient stone caves, the landscape of Provence had been an established subject for plein air painters for more than a century before Cézanne began working outdoors there. His own interest in depicting geological formations dates to the mid-1860s, a period when changing theories about the evolution of the earth were in play. Cézanne and a close friend from his youth, Antoine-Fortuné Marion (1846-1900), who went on to become a noted geologist and paleontologist, first began painting the rocks on the Mediterranean coast and visited caves that had been used as prehistoric dwellings. Informed by these early experiences, Cézanne would explain that, when painting a landscape, he had to understand its underlying structure. 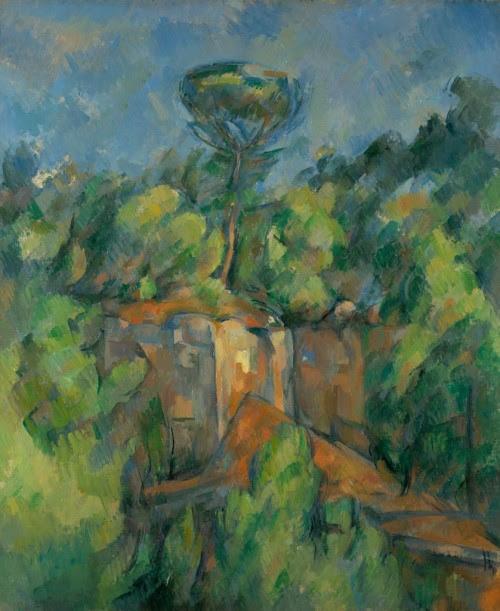 Cézanne’s unpopulated paintings of rocks and quarries embody a distanced, formalized view of nature as having its own, ancient order, which he built up with conspicuously assembled, flat patches of paint. While this method aimed at a true representation of the external visual world, it was deeply influential upon early 20th-century artistic developments toward abstraction: Both Henri Matisse and Pablo Picasso reportedly said, “Cézanne is the father of us all.”

Among the landmark paintings shown in the exhibition are L’Estaque (1879-83, Museum of Modern Art, New York), with its massive triangle of rock and distant coastal promontory; the dark and dramatic Rocks at Fontainebleau (1895-1900, Metropolitan Museum of Art, New York); Montagne Sainte-Victoire seen from Bibémus (1895-1900, Baltimore Museum of Art), combining the orange limestone wall of this originally Roman quarry with the cool gray-blue of the famous mountain; and Rocks above Château Noir (1900-1904, Musée d’Orsay, Paris), one of the latest canvases in the exhibition, originally owned by Matisse.

The catalogue that accompanies the exhibition is published by the Princeton University Art Museum and distributed by Yale University Press. It includes a major essay by Elderfield surveying the evolution and workings of Cézanne’s artistic practice in the creation of these canvases; an essay on the geological context of the work by Faya Causey and introductions to the sites at which Cézanne painted by Anna Swinbourne, both independent scholars; and catalogue entries by Sara Green, Annemarie Iker and Ariel Kline, graduate students in the department of art and archaeology at Princeton University.

Cézanne: The Rock and Quarry Paintings is made possible by lead support from the Allen R. Adler, Class of 1967, Curatorial Leadership Fund. Generous support is also provided by Barbara and Gerald Essig; the Curtis W. McGraw Foundation; the Judith and Anthony B. Evnin, Class of 1962, Exhibitions Fund; and an indemnity from the Federal Council on the Arts and the Humanities. Additional supporters include the New Jersey State Council on the Arts, a partner agency of the National Endowment for the Arts, and the Partners of the Princeton University Art Museum.

The accompanying publication is made possible in part by support from the Barr Ferree Foundation Fund for Publications, Department of Art and Archaeology, Princeton University; Annette Merle-Smith; and the Andrew W. Mellon Foundation Fund.