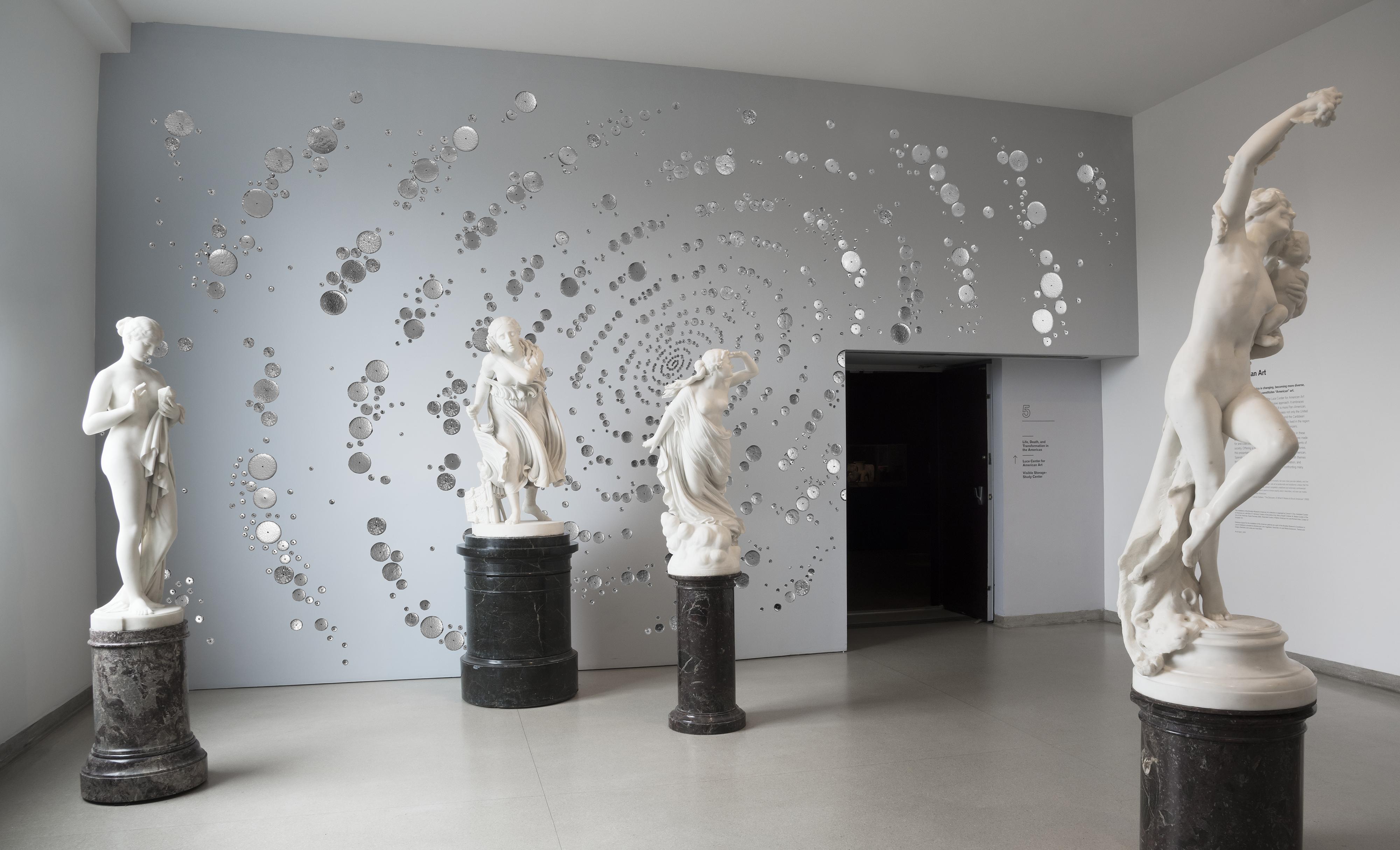 Courtesy of the artist and Gavlak, Los Angeles/Palm Beach

The Brooklyn Museum is pleased to present Rob Wynne: FLOAT, a site-specific activation putting the artist’s signature glass installations in dialogue with works in the American Art galleries. The presentation features fifteen works, mostly made from hand-poured, mirrored glass—some composed of over a thousand individual pieces—juxtaposed with selections from the Museum’s collection of historical American art. The installation will create unexpected encounters and conceptual resonances between the works on view.

New York–based Rob Wynne (born 1950) works in a wide range of mediums, including painting, drawing, sculpture, and photography, as well as experimentation with glass. Inspired by a chance encounter two decades ago, he began using hand-poured and mirrored glass in a series of large-scale works. In a labor-intensive, multistep process, each glass piece made is the result of extensive collaboration and virtuosic technique.

Greeting visitors in the 5th Floor lobby is the new, large-scale installation "EXTRA LIFE" (2018), a vortex comprising hundreds of pieces of glass that frame the group of nineteenth-century marble sculptures—in a space transformed as light from the window changes over the course of the day. The celestial shape of the installation speaks to the nearby sculpture by Randolph Rogers, "The Lost Pleiad" (circa 1874–75), whose female subject personifies one of the seven stars in the Pleiades constellation.

Wynne’s "MASQUERADE" (2014) hangs in the gallery devoted to colonial American portraiture, placed above the portraits by Samuel Waldo of Mr. and Mrs. David Leavitt (circa 1820–25). The pairing alludes to the artificiality inherent in portraiture, as sitters choose to reveal or conceal certain aspects of their identities.

In another pairing, "ALL THE WORLDLY POSSESSIONS OF THE PIED PIPER" (2018) is installed next to Janet Scudder’s "Seated Faun" (1924), a part-human, part-goat figure inspired by classical mythology. Scudder, relatively unknown today, was famed in her time for creating ornamental sculptures for gardens. Wynne’s text is inspired by Robert Browning’s poetry and suggests a connection between Scudder’s patrons and the fairytale of the Pied Piper, who led off the children of Hamlin when the stingy citizens refused to pay him for piping away the town’s rats.

"I SAW MYSELF SEE MYSELF" (2018), a phrase inspired by the title of Beatrice Wood’s autobiography, is situated above Kem Weber’s modernist, chrome "Vanity with Mirror," from 1934. Wood was an important early twentieth-century artist, and the placement of Wynne’s piece in a gallery devoted to the rise of the modern woman is particularly poignant. The work also makes use of the mirror in the Weber vanity to highlight the mediated nature of seeing, as viewers will see themselves in the mirror.

Other works on view include "DROPS" (2018), which draws out the emotional resonance of Hiram Powers’s famous "Greek Slave" (1866), widely understood in the period as a response to the Civil War and to the ongoing debate over the legacy of slavery in America; "WATERFALL" (2016), a vibrantly colored glass sculpture inspired by Hokusai’s woodblock prints; and "PUSH" (2018), related to the Native American objects shown nearby. Taken together, such dialogues stimulate fresh readings of familiar objects, revealing the collection anew.

“For this presentation at the Brooklyn Museum, my works are intended to provide reflective breathing space for viewers taking in the complex and varied works of the American collection,” states Wynne. “I have chosen certain touchstones in the collection that resemble such natural pauses, producing a growing sense of history and pleasure in the outpouring of sensory detail and information.”

This exhibition is made possible through the generous support of the May and Samuel Rudin Family Foundation, Inc.