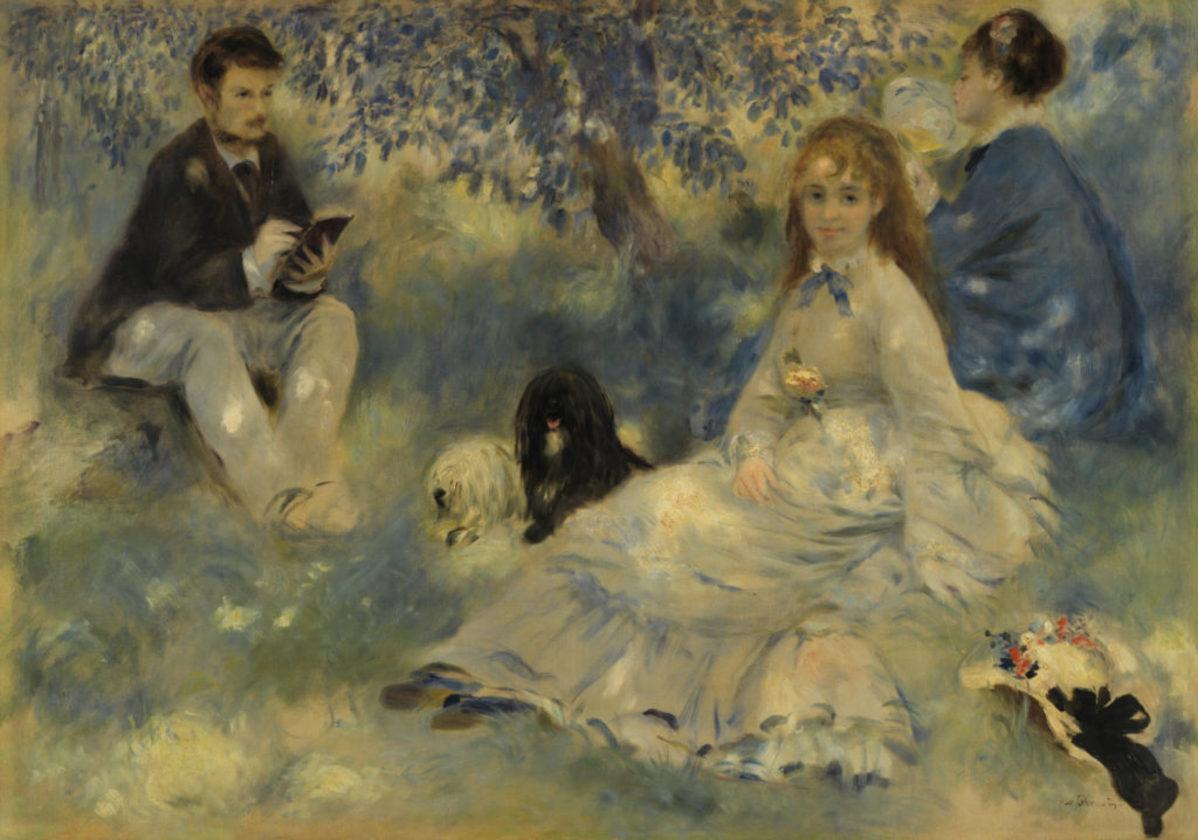 Philadelphia, PA—Premiering May 6, 2018, at the Barnes Foundation—home to the world’s largest collection of paintings by Pierre-Auguste Renoir—is a major exhibition examining the artistic exchange between the renowned impressionist painter and his son, celebrated filmmaker Jean Renoir. Renoir: Father and Son/Painting and Cinema brings together over 120 works,including paintings, films, drawings, ceramics, costumes, photographs, and posters—many never before shown in the US—for an illuminating exploration of Pierre-Auguste’s role in his son’s oeuvre and the relationship between painting and cinema. The exhibition is curated by Sylvie Patry, Consulting Curator at the Barnes and Chief Curator/Deputy Director for Curatorial Affairs and Collections at the Musée d’Orsay, and isorganized by the Barnes Foundation, Philadelphia, and the Musées d'Orsay et de l'Orangerie, Paris, incollaboration withLa Cinémathèque française, Paris.

Renoir: Father and Son/Painting and Cinema is sponsored by Comcast NBCUniversal, and is supported in part by an award from the National Endowment for the Arts.

Acclaimed director Jean Renoir (1894–1979) is perhaps best known for such films as La Grande illusion (The Grand Illusion) (1937), Partie de campagne(A Day in the Country) (shot in 1936, released in 1946), and La Règle du jeu (The Rules of the Game) (1939),all of which are considered milestones in the history of 20th-century art. Jean Renoir embraced cinema as a genuine form of artistic expression. In Jean’s films, as in his father’s paintings, the sense of informality or feeling of improvisation was in fact the result of an exacting and deliberate approach.

Jean’s background, particularly serving as Pierre-Auguste Renoir’s modeland witnessing the development of his father’s late manner at the beginning of the 20th century, profoundly shaped his career and filmmaking. Jean once wrote: “I have spent my life trying to determine the extent of the influence of my father upon me.” Framed within a rich dialogue between father and son, Renoir: Father and Son/Painting and Cinemadraws attention to Jean’s relationship to Pierre-Auguste’sartistic world, his perspective on his father’s work, and the portrayal of painters and the creative process in his films.

“It is quite an exceptional, if not unique, situation in the history of art, to have a father and son play such significant roles in their field. Inventing impressionism alongside his friends, Pierre-Auguste Renoir deeply renewed the art of his time. Jean Renoir, early in the history of cinema, invented new images. It is fascinating to see that Jean often referred to his father’s art and time in his films. However, their relationship was complex and oscillated between moments of admiration and rejection,” says Sylvie Patry.“If Pierre-Auguste’s artistic practice and creative universe at some points influenced Jean’s art, Jean’s films shed light on his father’s paintings.The Barnes, with its collection of Jean Renoir ceramics in addition to 181 works by Pierre-Auguste, is a fascinating setting to explore both the artistic relationship between father and son and how painting and cinema illuminate each other in many ways.”

By installing Pierre-Auguste’s work alongside clips from Jean’s films, the exhibition explores how each experimented with new modes of image-making and expression. Also on view will be Jean Renoir’s unpublished notebooks as well as his pottery, a largely unknown facet of the Barnes collection. Dr. Albert C. Barnes assembled the largest holding of Jean Renoir pottery in the world (40 pieces) in the early 1920s, and this exhibition will provide an opportunity to display a significant portion of this collection for the first time. With its vast Jean Renoir and Pierre-Auguste Renoir holdings, the Barnes is uniquely situated to provide a rich account of this father-son relationship.

Renoir: Father and Son/Painting and Cinema is on viewin the Barnes Foundation’s Roberts Gallery from May 6 through September 3, 2018. The Barnes is the exhibition’s sole US venue. The show will travel to the Musée d’Orsay, Paris, where it will be on view November 6, 2018 through January 27, 2019.

Renoir: Father and Son/Painting and Cinema exhibition highlights include:

PAINTINGS AND WORKS ON PAPER
Over 20 paintings and works on paper by Pierre-Auguste Renoir and other 19th-century French artists, including such major loans as Renoir’s The Swing (La Balançoire) from the Musée d’Orsay—which was included in the impressionist exhibition of 1877 in Parisand has not been exhibited on the east coast of the US since 1986; Jean as a Huntsman (1910) from the Los Angeles County Museum of Art; Jean Renoir Sewing (1899–1900) from the Art Institute of Chicago; Gabrielle and Jean (1895–96) from Musée de l’Orangerie; and Henri de Toulouse-Lautrec’s Waiting (At Grenelle) (1887) from the Clark Art Institute.

COSTUMES
Four costumes designed for Jean Renoir’s films, which often echo color and form notable in the paintings of his father.

PHOTOGRAPHS
50 modern reproductions of archival photographs mostly from the Jean Renoir archives at the University of California, Los Angeles, as well as from La Cinémathèque française.

POSTERS
Six movie posters from Jean Renoir’s films, four of which are drawn from the collection of Martin Scorsese.

RELATIONSHIP TO DR. ALBERT C. BARNES AND HIS COLLECTION
After Pierre-Auguste Renoir died in 1919, Jean, like his two brothers—Pierre, the famous actor, and Claude (“Coco”)—inherited several hundred paintings left by his father in his studios. Jean played a key role in the dissemination and assessment of these late works in the 1920s. An avid collector of Renoir, Dr. Albert C. Barnes forged a connection with Jean and acquired paintings from his holdings. More importantly, they both fought in favor of previously maligned works such as The Bathers(1919, Musée d’Orsay, Paris). These works included Renoir’s most sensuous nudes painted at the end of his life, which many critics found disconcerting due to their exaggerated forms and reddish tonalities. By avidly collecting these late pictures, Barnes contributed to the establishment of their significance for Matisse and Picasso, who both admired Renoir. Jean too helped promote this chapter of his father’s life by lending such works to exhibitions and by his gift—made together with his brothers—of The Bathersto the Musée du Louvre in 1923.

It is little known that before becoming a film director, Jean was an active ceramist. Barnes, who rejected the traditional hierarchy that ranked the applied arts lower than the fine arts, was his most significant collector. Like other ceramists of the early 20th century, Jean drew his inspiration from popular culture, favoring simple forms, vivid colors, and decorative designs for his pottery, which he wanted to look handmade and spontaneous. Later, he asserted that ceramics and cinema were comparable, since chance and accident play a critical role in both.

CATALOGUE
Renoir: Father and Son/Painting and Cinema is accompanied by a fully illustrated catalogue, published by the Musée d’Orsay and Flammarion in association with the Barnes Foundation.

The exhibition is curated by Sylvie Patry, Consulting Curator at the Barnes Foundation and Chief Curator/Deputy Director for Curatorial Affairs and Collections at the Musée d’Orsay, Paris, with the assistance of Barnes Associate Curator Cindy Kang, and for the selection of the films, Matthieu Orléan of La Cinémathèque française, Paris.

SPONSORS
Renoir: Father and Son/Painting and Cinema is sponsored by Comcast NBCUniversal.

The exhibition is supported in part by an award from the National Endowment for the Arts.

ABOUT THE BARNES FOUNDATION
The Barnes Foundation is a non-profit cultural and educational institution that shares its unparalleled art collection with the public, organizes special exhibitions, and presents programming that fosters new ways of thinking about human creativity. The Barnes collection is displayed in ensembles that integrate art and objects from across cultures and time periods, overturning traditional hierarchies and revealing universal elements of human expression. Home to one of the world’s finest collections of impressionist, post-impressionist, and early modern paintings—including the largest groups of paintings by Pierre-Auguste Renoir and Paul Cézanne in existence—the Barnes brings together renowned masterworks by such artists as Henri Matisse, Pablo Picasso, Amedeo Modigliani, and Vincent van Gogh, alongside ancient, medieval, Renaissance, and non-Western art as well as metalwork, furniture, and decorative art.

The Barnes Foundation was established by Dr. Albert C. Barnes in 1922 to “promote the advancement of education and the appreciation of the fine arts and horticulture.” Since moving to the heart of Philadelphia in 2012, the Barnes has expanded its commitment to teaching visual literacy in groundbreaking ways, investing in original scholarship relating to its collection and enhancing accessibility throughout every facet of its program.

The Barnes Foundation is open Wednesday–Monday, and tickets can be purchased on-site, online, or by calling 215.278.7200. Ticket prices and current hours are listed on our website.